Accessibility links
White House Says Zika Response Needs To Be Launched Before Summer : Shots - Health News The Obama administration requested $1.9 billion in emergency funds to prepare for Zika, but Congress has yet to respond. Now the White House plans to divert funding intended for Ebola. 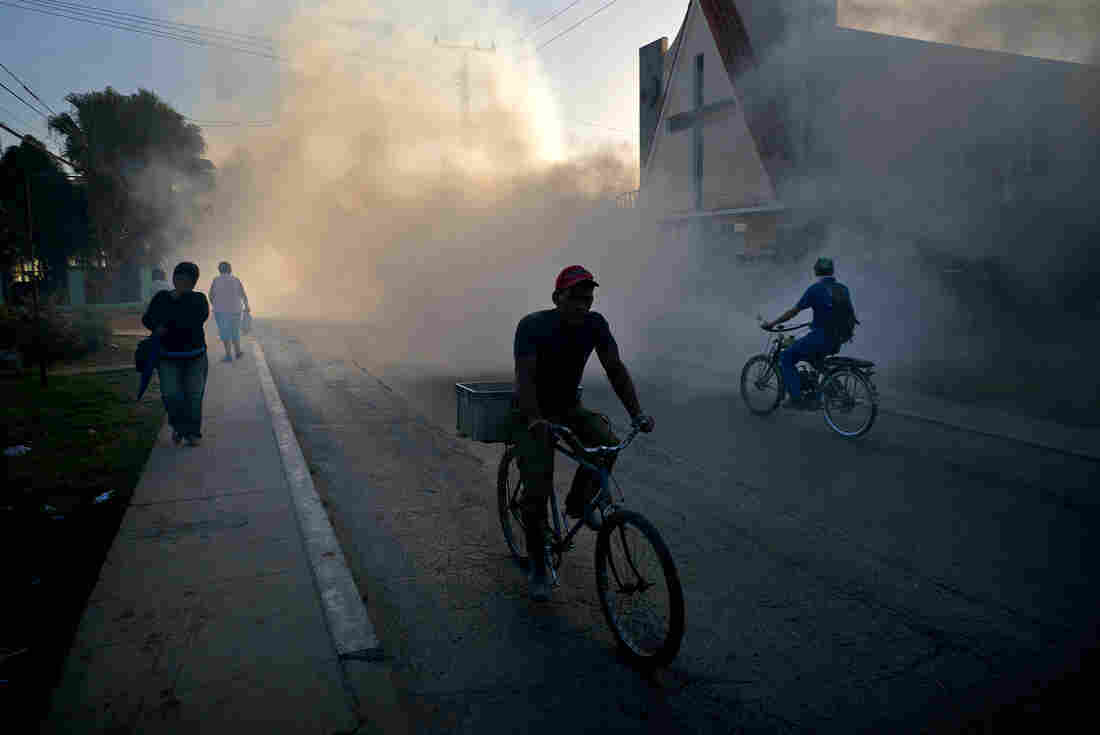 People in Pinar del Rio, Cuba, make their way through a fumigation fog that's meant to kill the mosquito that transmits the Zika virus.

Top officials with the Obama administration said Wednesday that they'll redirect $589 million toward the Zika virus response. Most of that money was to be used to deal with Ebola virus.

Almost two months ago, the Obama administration requested $1.9 billion from Congress to respond to the Zika threat.

"But Congress has yet to act," Shaun Donovan, director of the Office of Management and Budget, said in a news conference. "In the absence of congressional action, we must scale up Zika preparedness and response activities right now."

Over 600 people with Zika, including 64 pregnant women, have been reported in U.S. states and territories. In most cases, people contracted the virus while traveling.

But Sylvia Burwell, secretary of the U.S. Department of Health and Human Services, says she expects to see local Zika virus transmission in the continental U.S. in coming months.

The redirected funds will go to mosquito control and surveillance; education about how to prevent transmission; supporting states and territories in their own Zika virus responses; and developing vaccines and better diagnostic tests.

Burwell and Donovan reiterated that the administration's earlier request for supplemental funding from Congress remains in place. And, they say, the administration will also ask for funds to replenish the amount currently being moved from the Ebola response to the Zika response.

Without the full supplemental funding, Burwell says, a number of crucial activities would be impacted.

"Mosquito control and surveillance might need to be delayed or stopped. Our ability to move to a subsequent phase of vaccine development could be jeopardized. And without more funding, the development of faster and more accurate diagnostics could be impaired," says Burwell.

One reason for the haste is that public health officials want to get mosquito control and surveillance underway before the peak summer mosquito season in the U.S., and before the rainy season in Central America and the Caribbean.

Most of the redirected funding — $510 million — is coming from the Ebola response. That's concerning, because while the public panic over Ebola has faded, the virus continues to flare up.

"We face two real global health challenges — Ebola and Zika — and we don't have an option to set one aside in the name of the other," says Burwell.

Last week, a woman in Liberia died of Ebola. And though Guinea was declared Ebola-free in December, last month World Health Organization officials put more than 1,000 people under medical watch because they may have come into contact with eight people who contracted Ebola.

It's those kind of activities that could be shortchanged by diverting funds away from Ebola and toward Zika, administration officials say.