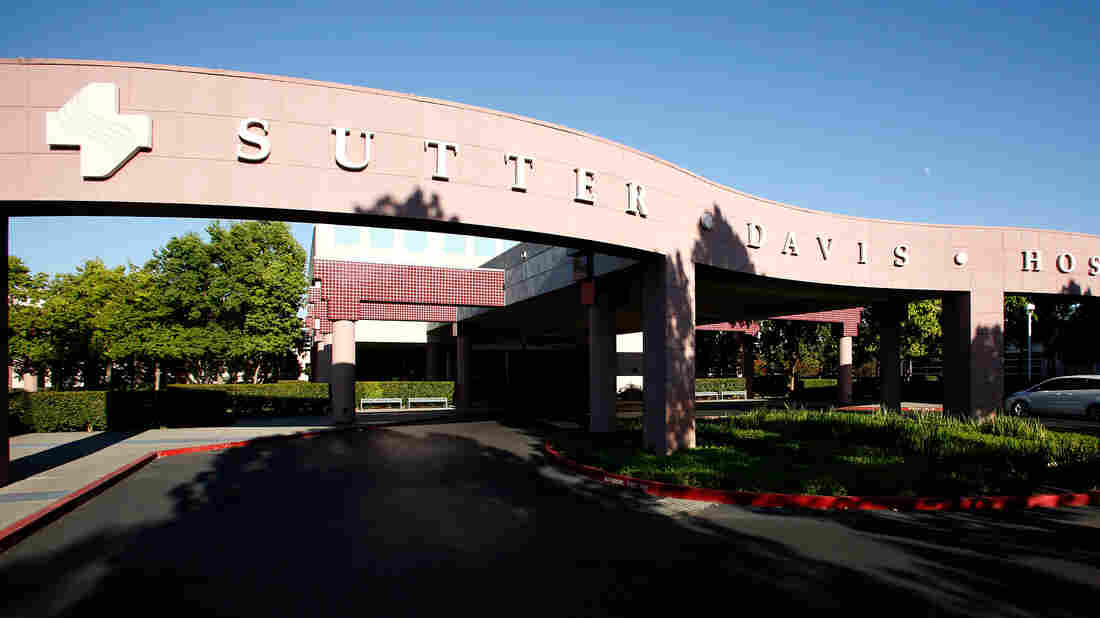 The entrance to Sutter Davis Hospital in Davis, Calif. Sutter Health has hospitals in more than 100 communities in Northern California; it reported $11 billion in revenue last year, with an operating profit of $287 million. Ken James/Bloomberg via Getty Images hide caption 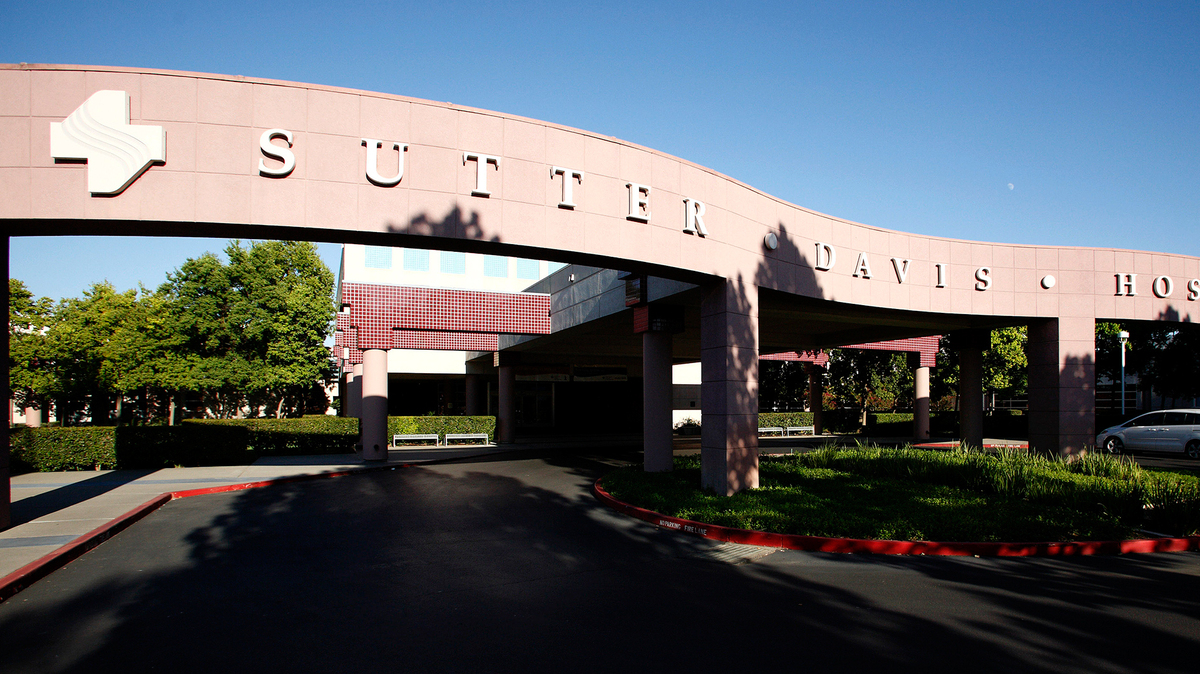 The entrance to Sutter Davis Hospital in Davis, Calif. Sutter Health has hospitals in more than 100 communities in Northern California; it reported $11 billion in revenue last year, with an operating profit of $287 million.

Sutter Health, a large network of doctors and hospitals in Northern California that has long been accused of abusing its market power, is now squaring off against major U.S. corporations in a closely watched legal fight.

The battle is over Sutter's demand that companies sign an arbitration agreement to resolve any legal disputes with the health system. If firms don't sign the agreement, Sutter says, the companies will have to pay sharply higher rates for medical treatment of their employees at Sutter's hospitals, surgery centers and clinics – 95 percent of Sutter's full charge.

Sutter's nonprofit system, based in Sacramento, includes 24 hospitals, 34 surgery centers and more than 5,000 physicians. It reported $11 billion in revenue last year and an operating profit of $287 million.

Some companies and labor unions say Sutter's ultimatum is aimed at preventing them from joining an ongoing class-action lawsuit that accuses the giant health system of imposing anticompetitive terms and "illegally inflated prices" for health care. Sutter disputes the allegations, and says its charges are in line with those of its peers.

In a March 16 court filing, David Lansky, chief executive of the Pacific Business Group on Health, said it isn't feasible for large companies employing people in Northern California to exclude Sutter from their workers' insurance networks, given the network's size and reach. Lansky's organization represents big companies like Wells Fargo Bank, Intel and Chevron, as well as government agencies like the California Public Employees' Retirement System.

"Their choice is between two unacceptable alternatives," Lansky said in his filing. "Pay 95 percent out-of-network pricing for enrollees that access Sutter services, or agree to give up their claims in this litigation."

Major insurers are split in their reaction to Sutter's move. Industry giants Anthem and Aetna are urging customers to accept arbitration in order to remain in the network, while rival Blue Shield of California says it opposes Sutter's request. Blue Shield has clashed publicly with Sutter before over contract terms and prices.

All this comes amid growing concern nationwide about the financial toll from industry consolidation, as big health systems amass market clout by acquiring more hospitals, outpatient facilities and physician offices.

"This is an important legal case because it could have national repercussions," said Glenn Melnick, a health-care economist at the University of Southern California. "Sutter is the model for the rest of the country, and there are so many other health systems doing similar things so they can raise prices."

The current fight centers on large employers that tend to self-insure because they have the financial resources to pay their own medical claims. These firms often hire an insurer to negotiate with hospitals and other health care providers to get discounted rates for employees.

Sutter insists it won't use the arbitration agreements to prevent employers from participating in the class-action lawsuit brought by a grocery workers' health plan in San Francisco County Superior Court.

The health system says it only sought the new arbitration requirement after a state appellate court ruling last year. The court ruled that the plaintiff suing Sutter — the United Food and Commercial Workers and its Employers Benefit Trust — wasn't bound by the arbitration provisions in the contract that Blue Shield signed with Sutter as the health plan administrator.

Sutter says it is asking employers and labor groups to review and agree to its contract terms so there's consistency among all parties involved. Arbitration is widely used by companies of all types to avoid costly litigation in resolving disputes.

"If self-funded payers wish to access the discounted rates that Sutter Health makes available under these contracts, it is reasonable to ask that they abide by the package of terms that make those rates financially feasible," Sutter spokesman Bill Gleeson says. "They should not be able to cherry pick which provisions apply to them and which do not."

But attorneys for the grocery workers' health plan are asking the court to stop Sutter from seeking arbitration agreements, alleging that the health giant's move is an attempt to hinder the litigation. A hearing on the matter is slated for Thursday.

"We do not want potential class members precluded from this lawsuit at the point of a gun," said Richard Grossman, lead counsel for the joint employer-union health plan, which represents more than 60,000 employees, dependents and retirees. "The fact they are even willing to make this threat to obtain the arbitration clause has shocked the payer community."

Bill Kramer, executive director for national health policy at the Pacific Business Group on Health, agreed that Sutter's threat to pull all of its facilities from an insurance network took employers by surprise.

"This can appear to be an arcane legal battle between corporations, but it has real-world consequences for the affordability of health care for employees and their families," Kramer says. "The in-network rates at Sutter are already too high, and out-of-network prices are even higher."

The lawsuit over antitrust violations and unfair competition alleges that Sutter's hospital prices in San Francisco have exceeded those of competitors by as much as 56 percent. It also says an overnight hospital stay at Sutter hospitals in San Francisco or Sacramento costs at least 38 percent more than a comparable stay in the more competitive Los Angeles market.

In a Feb. 22 memo to customers, Anthem said it "must now obtain a signed attestation from all California-based self-funded customers and all Anthem national accounts with 50-plus members in Sutter's Northern California service area." Many customers face a May 16 deadline to sign, according to Anthem.

The insurer noted that state and federal investigations of Sutter's conduct haven't yielded any results so far.

California Attorney General Kamala Harris has been investigating Sutter and other big medical providers for several years over potential harm to consumers. A spokeswoman for her office says the attorney general can't comment on any ongoing investigations.

Meanwhile, Sutter accounts for 28 percent of Anthem's medical spending in a 21-county area of Northern California, according to the insurer.

"Sutter's market share is over 35 percent in eight counties and over 45 percent in six counties," Perry Pogany, Anthem's vice president for account management, wrote to customers in February. "Sutter is able to secure significant and unique concessions in its carrier contracts due to its position in northern California."

Anthem and Blue Shield both declined to comment further on the Sutter matter. The grocery workers' self-funded plan that is suing Sutter is a customer of Blue Shield.

Melnick and other economists say the lack of competition among health care providers in Northern California helps explain why the premiums there for health insurance are about 25 percent higher, on average, than premiums in the southern part of the state.