Accessibility links
Technology Helps A Paralyzed Man Transform Thought Into Movement : Shots - Health News An implant and wires that reroute nerve signals from a man's brain to his hand allow him to grasp and lift objects, after much practice. But easy, wireless signaling from the brain is still the goal. 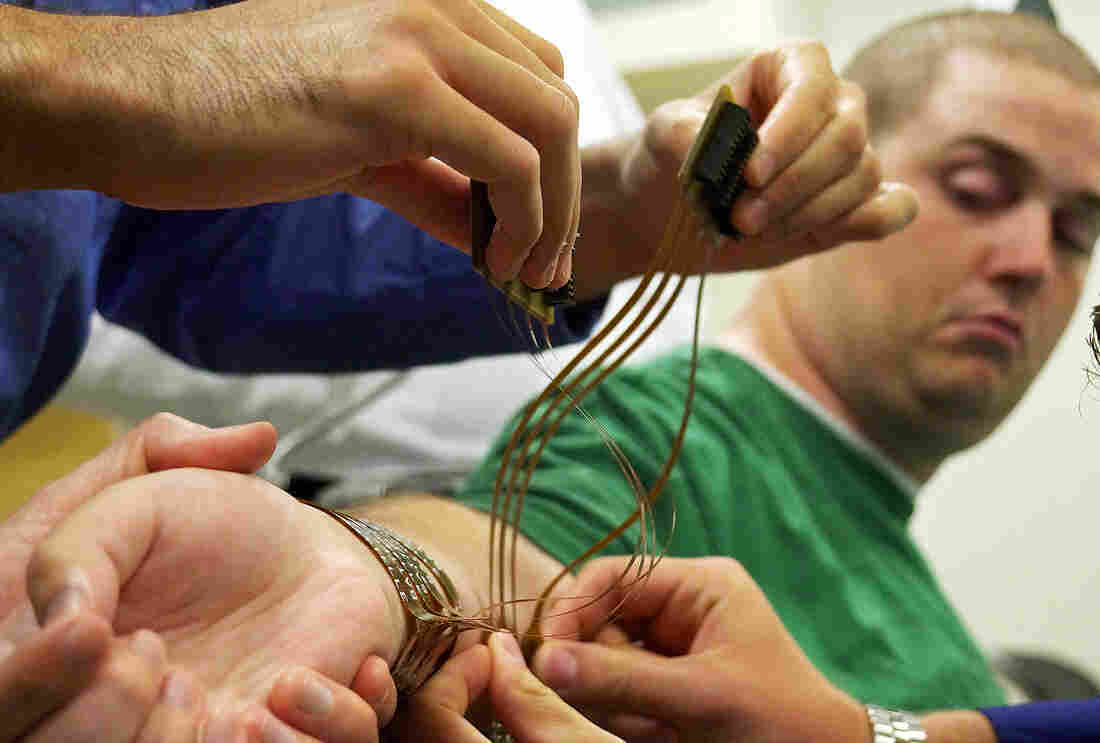 Ian Burkhart prepares for a training session in Columbus, Ohio. To move muscles in Burkhart's hand, the system relies on electrodes implanted in his brain, a computer interface attached to his skull, and electrical stimulators wrapped around his forearm. Lee Powell/The Washington Post/Getty Images hide caption 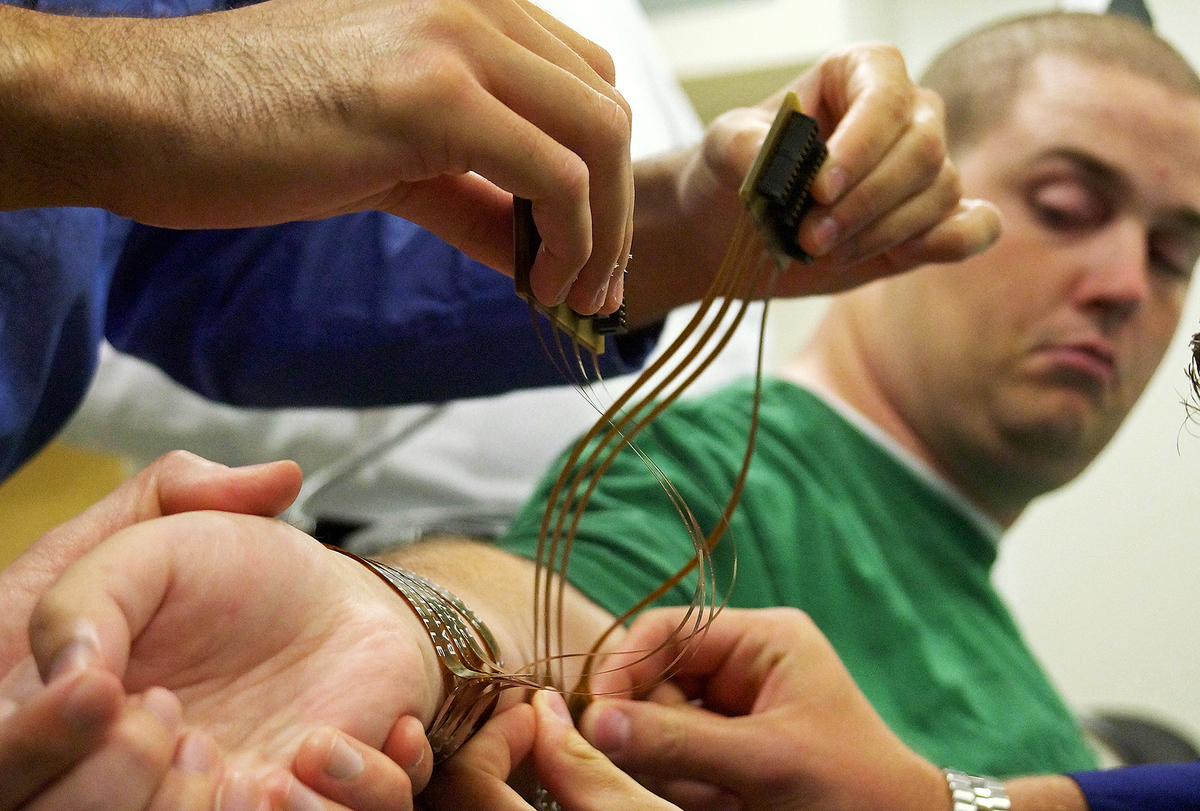 Ian Burkhart prepares for a training session in Columbus, Ohio. To move muscles in Burkhart's hand, the system relies on electrodes implanted in his brain, a computer interface attached to his skull, and electrical stimulators wrapped around his forearm.

Ian Burkhart, now 24, was paralyzed in 2010 after diving into a wave in shallow water. The accident left him with some arm movement but no use of his hands.

Then, about two years ago, scientists in Ohio equipped Burkhart with a system that allowed him to control his right wrist and hand with his thoughts.

"The first time moving my hand — that was really just like that flicker of hope," Burkhart told reporters during a media briefing Tuesday. The briefing was held to publicize a study in this week's issue of Nature, which describes Burkhart's progress since he started using the system.

After many months of practice, Burkhart can now perform tasks like pouring water from a bottle, grasping small objects, and swiping a credit card through a card reader. He can also control the movement of individual fingers.

It's all possible because of technology that intercepts and decodes electrical signals from the brain before they reach Burkhart's damaged spine.

"We're actually routing them around the spinal cord injury and then reinserting those signals into the muscles," says Chad Bouton, the study's first author and vice president of advanced engineering at the Feinstein Institute for Medical Research in Manhasset, N.Y.

The system relies on electrodes implanted in Burkhart's brain, a computer interface attached to his skull, and electrical stimulators wrapped around his forearm.

At first, Burkhart could grasp objects, but he would drop them when he moved his arm. His skill has improved steadily, though, Bouton says.

Burkhart's achievements have received a great deal of media attention. But he is just one of many paralyzed people using technology that allows them to perform daily tasks using their thoughts.

And much of the technology Burkhart relies on is also in use at other research centers, says Robert Kirsch, chairman of the department of biomedical engineering at Case Western Reserve University and executive director of the Cleveland Functional Electrical Stimulation Center.

"The brain computer interfacing that they did is kind of garden variety," Kirsch says. "And the electrical stimulation that they've done is really old-fashioned."

Other groups have obtained better results using electrical stimulators that are implanted in muscles, instead of placed on the skin, Kirsch says. That approach requires extra surgery but allows more precise control of muscles, he says.

At a scientific meeting last year, a member of Kirsch's team reported on a person using their technology who is able to use thoughts to trigger muscles in both the arm and hand. That's important, Kirsch says, because, unlike Burkhart, many other paralyzed people have no use of their arms or shoulders.

More than a decade of experiments has shown that paralyzed people can learn to use their thoughts to control computers, robotic arms and even their own limbs, says Leigh Hochberg, a professor of engineering at Brown University. Unfortunately, the systems that make this possible still aren't suitable for use at home, he says.

And that, he says, will require technological advances — including the ability to transmit signals from the brain without using wires.

"The process of getting from where we are today, which is some exciting early clinical research, all the way through to a clinically useful, vetted device that will help someone with paralysis is still a long one," Hochberg says.

Even so, Hochberg and other paralysis researchers say the wait will probably be measured in years, not decades.