Accessibility links
How The Fungus Among Us — And On Us — Shapes Health : Shots - Health News Among the microbes that live in us and on us, bacteria have gotten most of the attention. Now scientists are exploring the fungi and their effects on health. 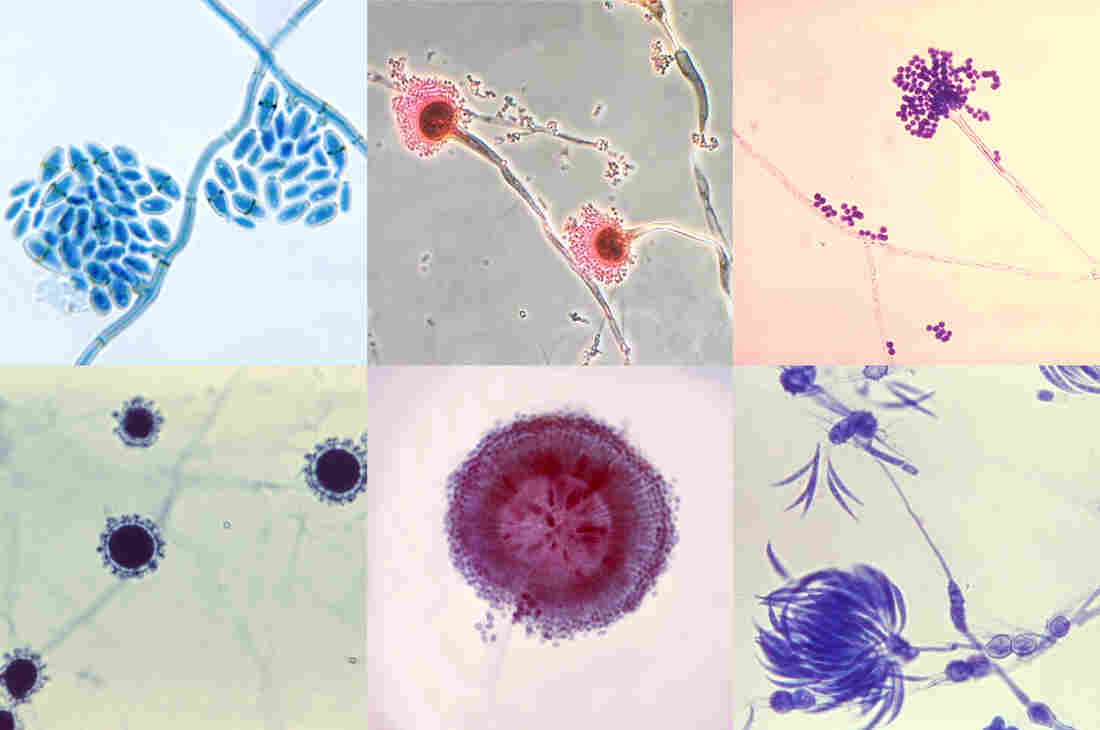 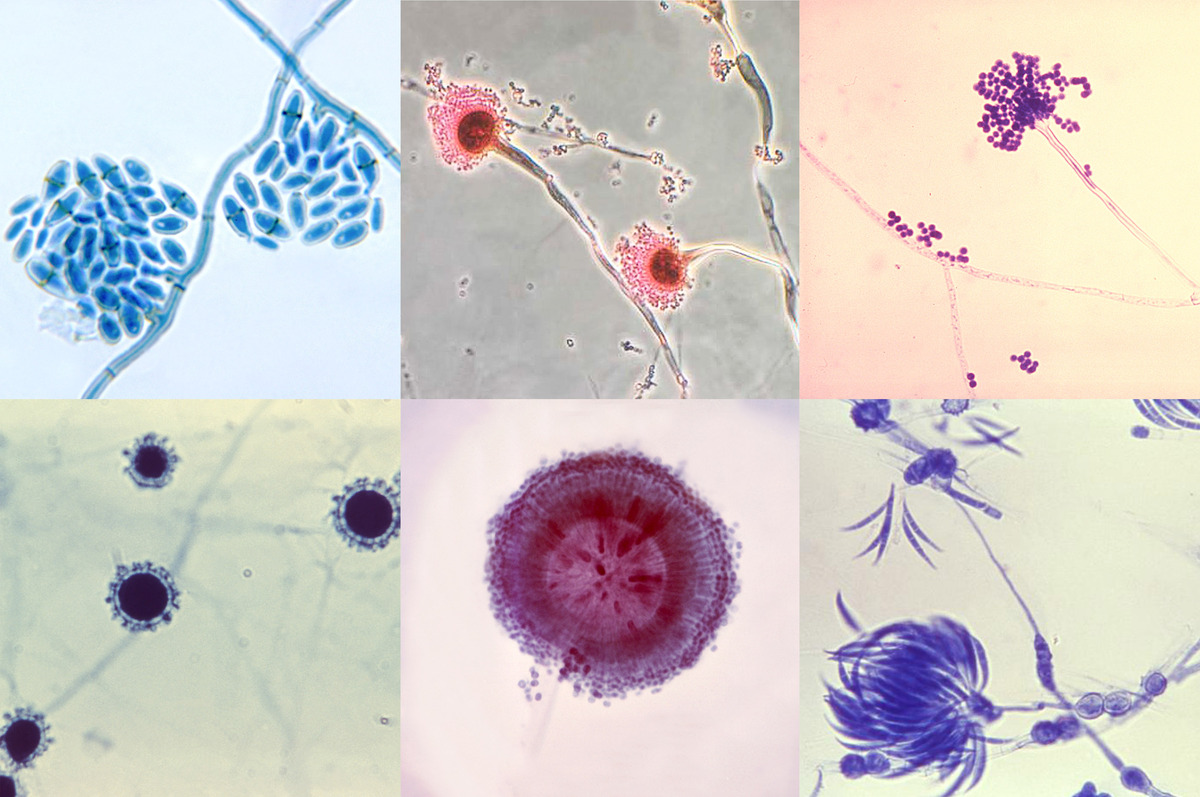 When it comes to the trillions of microorganisms that inhabit our bodies, bacteria get almost all the attention.

Changes in our resident microbiota and their collective genome — called the microbiome — have been linked with a wide range of diseases, from various forms of arthritis to depression. At this point scientists tend to focus on which bacterial species might hinder or maintain health.

But our biota comprises a menagerie of microbes. And a growing number of researchers feel that alongside bacteria, the fungi that inhabit our bodies – or, collectively, the "mycobiome" — may also be influential in both our well-being and, at times, disease.

It was Case Western Reserve medical mycologist Mahmoud Ghannoum who first coined the term mycobiome. "Back around 2008, I was attending meetings and noticed people were really starting to talk about the microbiome," he recalls, "But for the most part they were only talking about bacteria, not the fungus and viruses that also comprise our biome. I thought to myself that we should also start looking at fungal communities."

In 2010 Ghannoum's group published a study in PLoS Pathogens that for the first time used advanced genetic sequencing technology to characterize what constitutes a normal mycobiome in the human mouth. The idea was to establish a baseline fungal profile to which altered fungal populations in disease could be compared. Whereas previous research reported a relatively limited number of fungal species in our oral cavities — primarily Candida, which when overgrown causes thrush – Ghannoum and his colleagues identified a veritable zoo of fungal colonists in the mouths of the 20 study participants.

In all they reported 101 fungal species, with each person harboring between 9 and 23 strains. They considered a healthy fungal community to include those species present in at least 20 percent of the participants, including, most commonly, various Candida species. This core mycobiome also included Cladosporium, a known asthma trigger; Aureobasidium, which can cause fungal infections in organ transplant patients; and some potentially beneficial species, like Saccharomyces boulardii.

Fungi Out Of Balance

Also found in the baseline biome were, after Candida, the most common disease causing fungi: Aspergillus, Fusarium and Cryptococcus. That so many potentially harmful fungi were found to be common, Ghannoum believes, could mean that under normal conditions other fungi and microbes may keep these pathologic strains in check.

Supporting this idea that disrupting the body's fungal equilibrium can bring about disease was a paper Ghannoum published a few years later looking at the fungi present in the mouths of HIV-infected patients. They found that Pichia – a yeast used in agriculture to prevent the growth of other fungi on various crops – inhibits the growth of Candida and other pathologic fungal species.

"By growing Pichia in the lab we found that it secretes a compound that can treat fungal infections in animals," Ghannoum explains. In mice with compromised immune systems, which served as an animal model of HIV, those exposed to Pichia developed far less severe infections when inoculated with Candida.

On the heels of Ghannoum's work, a number of other research groups set out to better understand our relationship with fungi. In 2012 and 2013 respectively, a Japanese team and researchers from the National Institutes of Health profiled the mycobiome of the skin and reported distinct communities based on body location, findings that could contribute to the search for new treatments for fungal skin disorders.

More recently, French researchers distinguished the fungi present in healthy human lungs compared with those afflicted with cystic fibrosis. Aspergillus was most prevalent in the lungs of healthy people, whereas various Candida species dominated in those afflicted with CF and other lung disorders.

Another early player mycobiome research was UCLA professor David Underhill. In 2012 Underhill and his colleagues published a study in Science that used sequencing tools similar to those used by Ghannoum to profile a baseline gut mycobiome in mice. On average they found between 50 and 60 fungi genera (the plural of genus) in each rodent's gastrointestinal tract, and many species within each genus.

"We showed that there is considerable fungal diversity in mice," comments Underhill, "but we were also interested in how these fungi might be contributing to disease."

In the same study Underhill's group found that mammalian fungi interact with the immune system to control inflammation in the gut. Specifically they looked at the importance of a protein found on the surface of immune cells called Dectin-1 that helps our bodies recognize and eradicate unwanted fungi.

Mice in which the gene encoding for Dectin-1 was inactivated and in which colitis was induced came down with far more severe disease than mice with the active gene. With these findings in hand they then identified a Dectin-1 gene variant in humans that predicted a severe form of inflammatory bowel disease called ulcerative colitis.

Underhill posits that alterations in the gut fungal population could be a significant contributor to at least some forms of inflammatory bowel disease cases and could represent a potential treatment avenue. However he acknowledges that a host of other factors seem to contribute to the condition as well.

"None of these factors are working in isolation," he says. "I think it's probably a confluence of them all interacting with each other and with us – what we eat, what kind of nutrients they have, genetic influences and how our immune system reacts to both fungi and bacteria in the gut."

Ghannoum agrees that a give and take among bacteria, viruses, fungi and each person's specific biology likely influences our health. "We know that when somebody takes an antibiotic they can develop fungal infections," he says. "So clearly there is interaction between these communities. From my point of view, I say, 'Look, it's not bacteria alone, it's not fungi alone – you have to put them together.' And I'm sure that viruses also play a role. We really need to look at the total picture."

Recent unpublished findings by Ghannom's lab show that an interaction between fungi and bacteria in the gut aggravates the body's autoimmune response in Crohn's disease, another form of inflammatory bowel disease.

In collaboration with a group at Cleveland Clinic, Ghannoum and his colleagues also beginning to show that oral fungal populations are different in people with head and neck cancers. That finding, Ghannoum says, could help replace or help confirm biopsies, if the work is confirmed in larger studies. Fungi may also contribute to some cases of arthritis. Recent research found that autoimmune arthritis can be induced in mice injected with certain compounds found in fungal cell walls.

But what does this research all mean for treating disease?

The biome-based therapy with perhaps the best supporting evidence is, like it or not, fecal transplantation: putting the stool of a healthy donor in a patient with Clostridium difficile colitis — a severe bacterial infection that often results as a side effect of antibiotic therapy. Patients receiving the healthy stool have a good chance of getting better. And there is growing evidence that probiotic approaches, including both bacterial and fungal species, might have benefits in various disorders, particularly once clinicians are better able to personalize regimens to individual patients.

However as New York University rheumatologist and microbiome researcher Dr Jose Scher, points out, probiotic research — especially the area involving fungi — is in its adolescence. "All the probiotic hype can get patients thinking 'Oh, my problem is caused by a bug. All I have to do is be on a certain diet and take certain probiotics or antibiotics and I my disease will be cured.' Unfortunately it's not as simple as that."

Still, Scher is hopeful. "This is just the beginning of this field," he says. "But I think understanding how bacteria, viruses and fungi can play a role in health maintenance and disease will help us develop more effective therapies."

Case Western's Ghannoum is also optimistic. "I think that the idea of probiotic and antibiotic therapies is a very important question," he says, "Should we use antifungals? Should we use antibiotics? Finally, should we use probiotics? They all make sense to me." But the key is first identifying the "friendly fungi," as he puts it; and the friendly viruses and bacteria; and how all of these microbes interact with the environment.

One of the roadblocks for researchers in studying marginalized microbes like fungi is knowing which species they're dealing with at all. "Fungal taxonomy is really complicated and not quite what we learned in school," explains Underhill, who notes that modern DNA sequencing has in many cases revealed that previous classifications that were incorrect.

Many fungi haven't yet been classified at all. As in many other areas of Linnaean cataloguing, technology has revealed the fungi kingdom to be a tangled thicket, not a cleanly branched family tree.

There are plenty of mycologists out there actively trying to address this confusion and construct a more precise taxonomy. And by continuing to hone fungal identification technology and illuminating fungi's potential relevance in better understanding, diagnosing and treating disease, UCLA's Underhill and his colleagues are helping to accelerate this work.

"We're in a stage where we're recognizing the biological significance of the fungi in our systems to help develop a common language and set of research approaches," Underhill says. "Soon, hopefully, we'll know how they can be good for us, bad for us and manipulated to our benefit."

There's a certain beauty in our biologic cooperative; a reminder that mammalian life is complicated and communal, and that in nature imbalance has consequences. But perhaps tinkering with our fungal dwellers will one day help restore our biologic balance and fend off disease.

As Russian chemist and periodic table architect Dmitri Mendeleev ruminated, "There exists everywhere a medium in things, determined by equilibrium."