Accessibility links
Teen Moms Reject Safe-Sleeping Standards : Shots - Health News Teenage mothers said they knew about safe-sleeping practices to prevent infant deaths. But they also said they weren't going to follow those rules because they knew what was best for the baby. 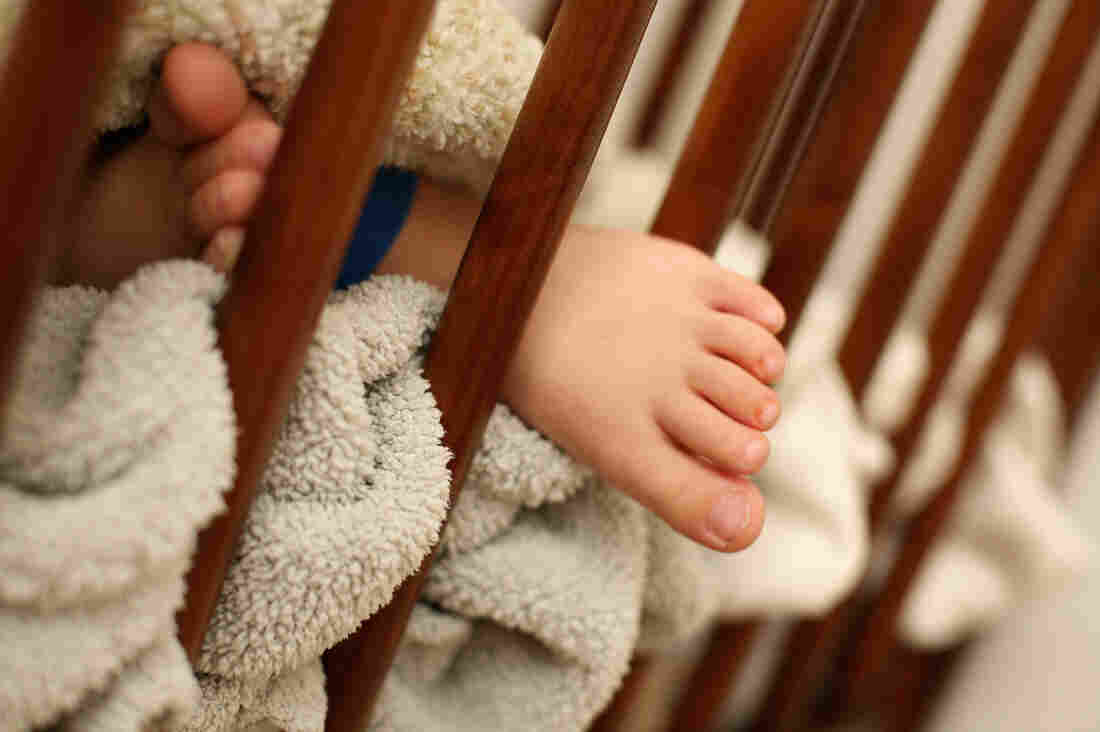 Teen mothers said they didn't follow advice to keep blankets and pillows out of the baby's crib, a study finds. iStockphoto hide caption 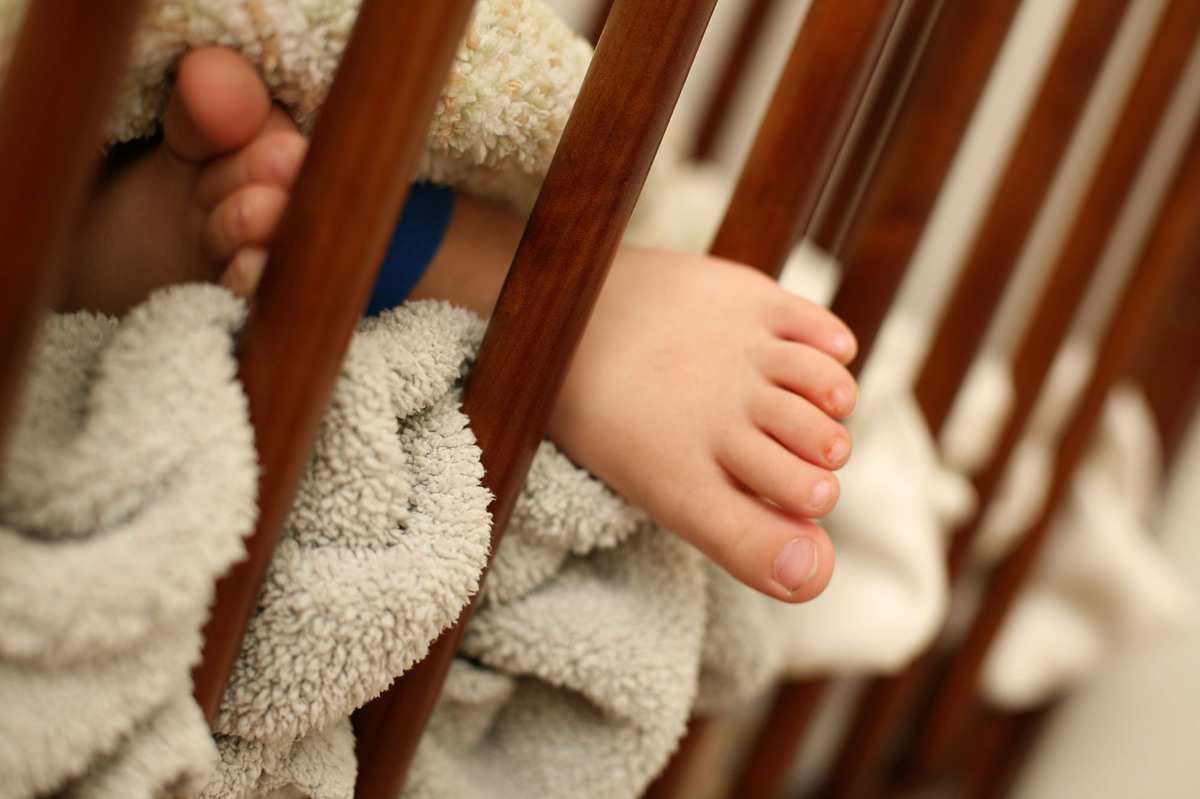 Teen mothers said they didn't follow advice to keep blankets and pillows out of the baby's crib, a study finds.

Does mother always know best? As a mom, I try to create the healthiest environment possible for my kids. I like to think my decisions are based on fact, but emotion plays a role, too. What happens if my choices aren't supported by medical research, and could even put my children at risk?

Teenage mothers who know about safe-sleeping practices to reduce the risk of infant death often deliberately do not follow those recommendations, a study published Thursday finds. Each year, sudden unexpected infant death will claim about 3,500 babies up to a year old in the U.S., with about a quarter of those due to accidental suffocation or strangulation in bed.

The national Safe to Sleep campaign, which started in 1994, has helped reduce sudden infant death syndrome in the U.S. by half. But while SIDS rates have declined, rates of other sleep-related causes of death — such as accidental suffocation or strangulation — have increased.

Almost all of the 43 teens in the study reported bed sharing and using loose blankets or soft bedding, which are listed as practices to be avoided in safe-sleeping recommendations for babies. Very few reported consistent use of a separate sleep space approved for infants. Among the teen mothers who reported bedsharing most of the time, they said they felt the baby would be safer and sleep better if in bed with them. They also said bedsharing helped curb their own exhaustion and provided better bonding opportunities.

The American Academy of Pediatrics advises against letting a baby under the age of one sleep with a parent in bed, but it does recommend having baby sleep in a safe crib or bassinet within arms' reach.

Nevertheless, the teenage mothers in the study felt their instincts trumped professional advice and the results of medical research. The study was published in the Journal of Pediatrics.

I was 30 when I had my first child, but I often felt as these teen moms did: My baby is safer next to me than in a crib, my baby is cold and needs a blanket, my baby is more comfortable in a softer environment. I have dozed off while holding my baby on a fluffy couch or tried to bond by letting my baby sleep stomach-down on my chest rather than face-up in a crib.

Where I did differ from teenage moms was in my approach: Although generally aware of the sleep recommendation guidelines, the teenage mothers in the focus groups had an almost cavalier confidence in their choice to act against them. Like many first-time mothers, I was timid and uncertain about my choices. I mostly followed the guidelines, and yet I felt so strongly about staying close to my baby that I did sometimes "cheat," attributing it to maternal instinct.

There is a difference between instinct and drive, however. Instinct is an unmodifiable behavioral response to the environment, and cannot be resisted. Drive can be both resisted and changed.

What I actually felt was drive. I had a choice, though the pull to do the opposite was very strong. In the study, all of the teenage mothers believed that their "instincts" (the word the teens used) were more accurate than anyone else's — and then acted on them — even when those feelings were in direct contradiction to research to the data on infant sleep safety.

"Adolescence in general is associated with immaturity and brain development and impulsive, risk-taking behavior," says Michelle Caraballo, an assistant professor of pediatrics at UT Southwestern Medical Center and an author of the study. "They also feel very judged by the people around them, so they want to prove that they can take care of their babies. I don't know if they actually feel that confidence or just project that."

Most of the teenage moms in the study reported getting conflicting advice from trusted sources, often leading them to make decisions based on their own personal preference.

Although Caraballo calls for new approaches such as consistently providing accurate information and creating public service announcements aimed at teen moms, she says she isn't sure what it's going to take to alter their decision-making process.

But she says the message should start by example, while new mothers are still in the hospital: "A lot of babies in hospital nurseries are placed with blankets." And, she says, many health care professionals aren't up to date on the recommendations.

In addition, many teenage moms are still living with their own mothers. The grandmother often looks after the baby while the mom is in school or working. As of 2011, more than 2.7 million grandparents not only lived with a grandchild, but also served as the primary caregiver.

Caraballo says more research is needed to target people who are influential in a teen's life, such as grandmothers, sisters or friends. "There is a lot of groupthink going on. They have a lot of influence over each other. Like anything in adolescence, there is a need to feel like they belong."

Grandmothers might be giving outdated information to their daughters simply because they don't know about updated safe-sleep procedures. Furthermore, the teens in the study said they tended to rely on health professionals for medical concerns, but on family and friends for parenting advice.

"If the teen gets one story from the doctor and one from Mom, who lives in the home, who are they more likely to believe?" Caraballo asks.

Indeed, as a mother with my mother living in our home, I often deferred to her way of doing things. I figured she had experience with babies and I didn't. Many times she would discount current childrearing recommendations as "overworry." For a teen, I imagine it would even be harder to question your mother, especially if you feel guilt and you are reliant on her for childcare.

And while Caraballo emphasizes that repeated and consistent messaging is important, she doesn't think it's enough to produce behavior change.

"The fact is you can do everything wrong, and your baby might not die, so how do you convince them that it's not a safe behavior?" she asks.

Laurel Dalrymple is a freelance writer and journalist living in Centreville, Va. Her work has been published in The Washington Post, Success magazine and several parenting blogs.

The original article didn't make it clear that this study did not evaluate the the pluses or minuses of cosleeping, but rather focused on study participants' beliefs. We have added a reference to the American Academy of Pediatrics recommendations.