Accessibility links
New Overtime Rules May Put Squeeze On Caregivers For Those With Disabilities : Shots - Health News The regulations, expected in the coming weeks, would require employers to pay such caregivers more. But many won't be able to comply because they rely on Medicare reimbursements, which won't change.

Listen · 4:11 4:11
New Overtime Rules May Put Squeeze On Caregivers For Those With Disabilities 4:11 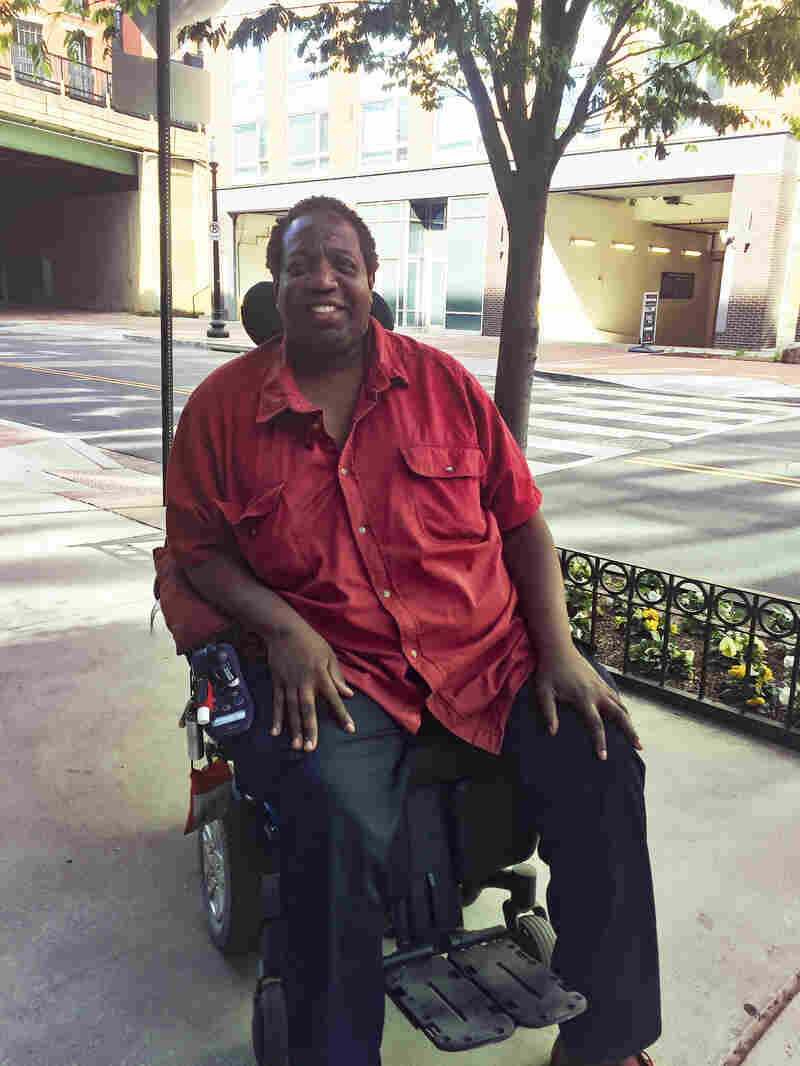 Thomas Mangrum of Washington, D.C., has used a wheelchair for 15 years. The company that provides his helper -- who assists him with his day-to-day activities — will have some tough choices to make once new regulations regarding overtime pay for lower-salaried workers come into effect. Courtesy of Amy Brooks hide caption 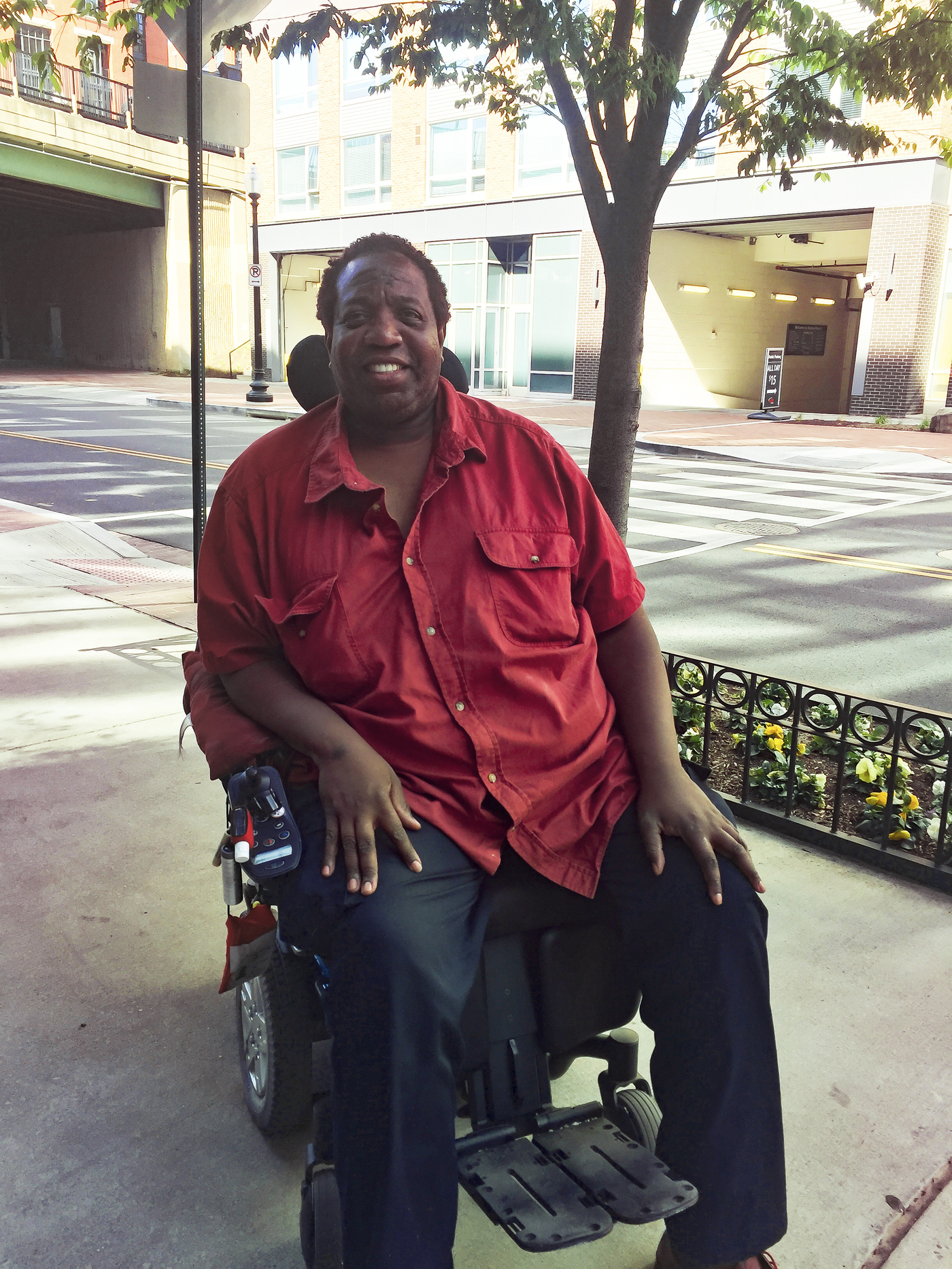 Thomas Mangrum of Washington, D.C., has used a wheelchair for 15 years. The company that provides his helper -- who assists him with his day-to-day activities — will have some tough choices to make once new regulations regarding overtime pay for lower-salaried workers come into effect.

In coming weeks, the White House is expected to finalize key new rules on overtime pay that could benefit an estimated 6 million lower-paid salaried workers. Workers' advocates say it's a long-awaited change. Most employer groups vocally oppose the new rules, because they might have to raise their minimum salaries, pay overtime — or limit their workers' hours.

Much of the debate has pitted workers against employers.

But at least one group is sympathetic to both sides: the American Network of Community Options and Resources, or ANCOR, an association that represents employers offering support services to intellectually disabled people.

ANCOR doesn't oppose the rules, because it wants to pay its workers more. At the same time, member employers won't be able to comply with the rules, because their revenue relies on Medicaid reimbursement rates, which aren't set to change.

"When we brought this issue to our board, the response was emphatically, 'Yes, we want to pay the people that work for us what they're worth,' " says Gabrielle Sedor, chief operating officer of ANCOR.

But the states set Medicaid reimbursement increases, and those typically take a lot of time to change, she says.

A study commissioned by ANCOR shows if the industry adjusts by increasing overtime pay, it will increase costs by about $1 billion. If it raises salaries for those under the anticipated new salary threshold, the added costs could be nearly $2 billion.

"What's most troubling to me is that over 20 percent thought that they would be forced to reduce services, and that's a real challenge, because in every state the need for services to people with intellectual disabilities is growing," she says.

And that might have an impact on people like Thomas Mangrum, who has a helper come to his row house in Washington, D.C., every weekday.

Big Financial Costs Are Part Of Alzheimer's Toll On Families

For 15 years, Mangrum has been wheelchair-bound due to spinal injuries, and also has difficulty reading because of a childhood brain injury. Mangrum has a helper, John Floyd, who cooks, cleans, opens his mail and takes him to appointments.

While Floyd is there most days, sometimes things happen during off-hours. The previous weekend, Mangrum was stranded, alone, with a broken wheelchair, so Floyd's employer, RCM, had to dispatch someone to fix it.

That requires odd hours of work that the new overtime rules might limit, because it would mean paying additional overtime.

Amy Brooks, RCM's chief executive, says her company and others will likely lobby states for a Medicaid rate increase, but "it often takes a lot of time, because states have to get approval for rate changes, so that's not gonna be an easy fix."

Difficult Balance Between Costs And Services

Meanwhile, Diana Hernandez, RCM's human resources manager, says she has considered staggering shifts, or offering compensatory time off for hours worked instead of increasing pay. But she cannot reduce pay or she'll lose staff, and she can't cut staff because she doesn't want to hurt clients.

New Rules Could Create A New Class Of Overtime Workers

"Talking about the different scenarios, none of them seem like the right way to go for us," Hernandez says. "And so we know that we have to come up with something, but we don't want to lose services to the people. I mean, that's why we're here, that's why we do what we do."

Ivan Parker is a coordinator who manages caregivers and their schedules for RCM, and he worries about other effects. Caregivers aren't interchangeable, he says; they know their patients' routines and they have relationships.

"When you disrupt these peoples' lives, they have behaviors, because their schedules are disrupted," Parker says. His schedule doesn't neatly fit into a 40-hour workweek, he says.

Mangrum, sitting nearby, chimes in. Disabilities, he says, don't only affect people between the hours of 9 and 5.