Accessibility links
In Houston, Pregnant Women And Their Doctors Weigh Risks Of Zika : Shots - Health News Mosquitoes infected with Zika haven't turned up along the U.S. Gulf Coast yet, but could thrive in the region's sultry summer weather. Pregnant women and their doctors are already taking precautions. 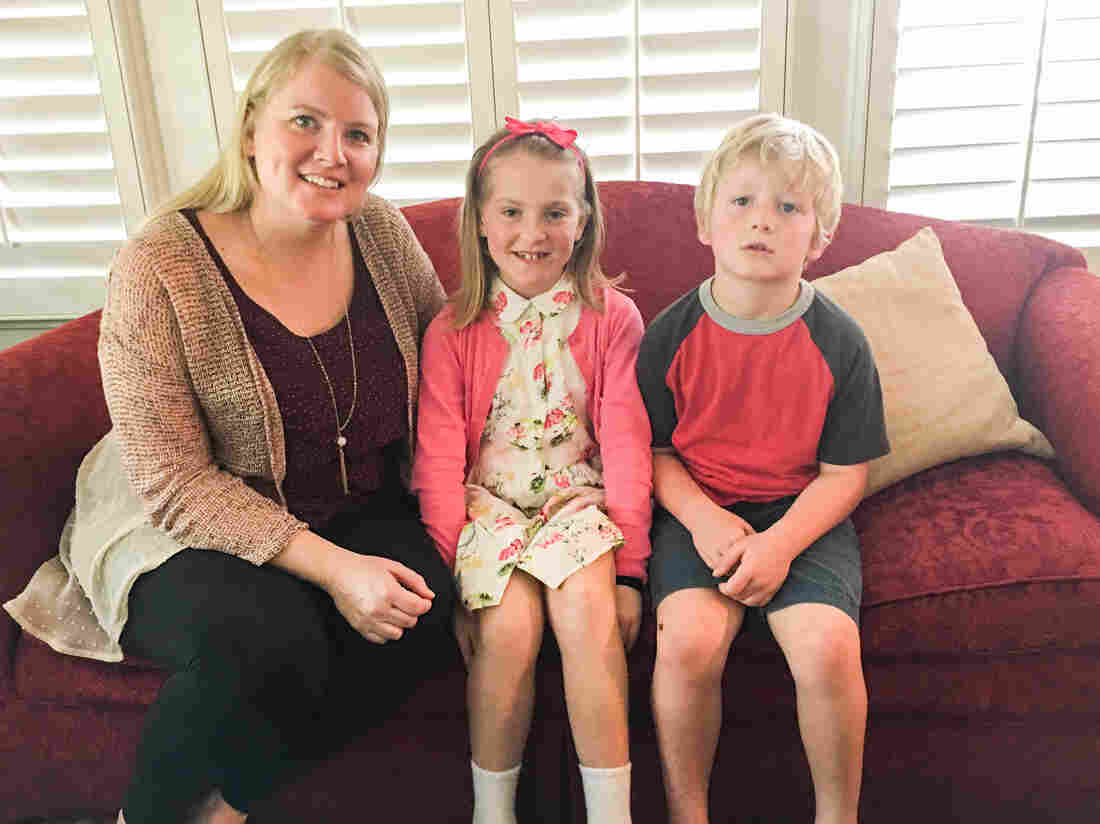 Tracy Smith, 38, and her children Hazel, 8, and Finley, 5, at their home in Houston. Smith is pregnant with twins and says she's a little more worried than usual about the approach of mosquito season. Carrie Feibel/Houston Public Media hide caption 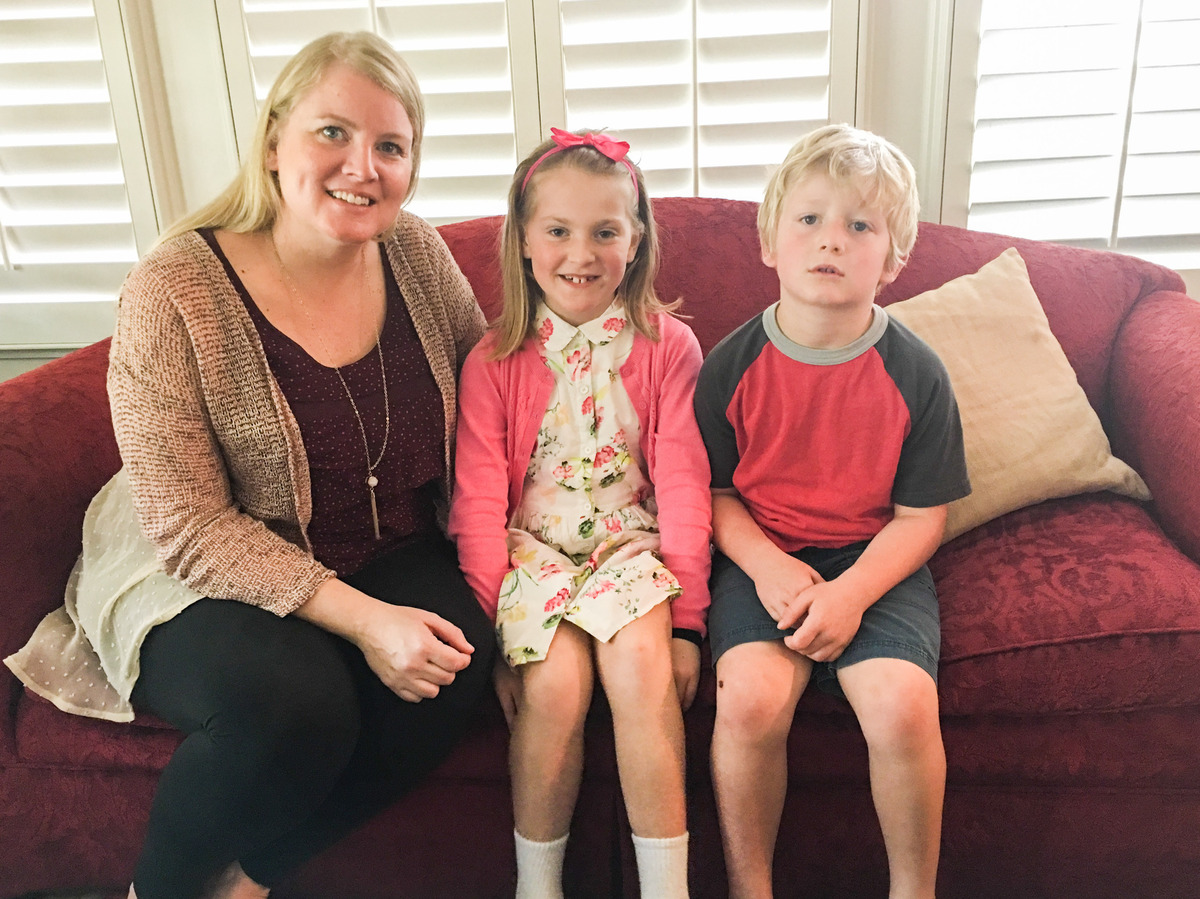 Tracy Smith, 38, and her children Hazel, 8, and Finley, 5, at their home in Houston. Smith is pregnant with twins and says she's a little more worried than usual about the approach of mosquito season.

As summer approaches, anxiety about Zika is growing in Gulf Coast states like Florida and Texas. The virus hasn't spread to mosquitoes in the region, and it may not, but experts are preparing nonetheless.

And because Zika can cause birth defects in newborns, many women — and their doctors — are nervous. In the waiting room of the fertility clinic Houston IVF, patients are handed a map of Zika-affected countries, and asked to fill out a questionnaire.

He says at least a few couples he's spoken with at the clinic have had to delay starting fertility treatment because the woman or her partner may have already been exposed to the virus while traveling to Central or South America.

"Especially in Houston, a lot of our patients and families are in the oil and gas industry," Nodler says. "These aren't people who are traveling to Mexico and Puerto Rico for fun or vacation. These are people who have to work in some of these offshore drilling areas."

This map shows the predicted distribution of Aedis aegypti, the mosquito that can carry the Zika virus. The redder the area, the likelier you are to find A. aegypti there. Kraemer et al., eLife hide caption

This map shows the predicted distribution of Aedis aegypti, the mosquito that can carry the Zika virus. The redder the area, the likelier you are to find A. aegypti there.

Nodler is even advising patients who haven't been to regions where Zika is prevalent to slather on repellent — just in case the virus is already in some mosquitoes along the Gulf Coast but we don't know it yet.

"No one wants to see an affected child," he says.

Nodler says couples will need to work together to manage their Zika risk. If his partner is already pregnant, a man should use condoms to avoid sexually transmitting the virus.

All over the city, parents and would-be parents have been absorbing the international news about Zika.

"They've been saying Zika is coming to Houston; they don't know when," says Annie Tursi. She's 35 and owns four hair salons. Her husband is a consultant. Tursi says they were going to try for a third baby in 2016, but have decided to watch and wait, instead, to see whether Houston has a Zika outbreak.

"I think we're really blessed to have two healthy boys," she says. "And if it does come this summer and it is a risk, then I probably just won't even try for another one."

Between their jobs and the toddler and the baby, there's no way she can simply hunker inside all summer to avoid mosquitoes, Tursi says.

"Right now there are just so many unknowns. And I think by the time they have a vaccine and know more, we'll be done" with having children, she says, chuckling. "We'll be out of diapers and we'll be done."

Another Houston mom, Tracy Smith, couldn't make that choice. She was already pregnant with twins when she heard about Zika. At a recent checkup, Smith's doctor told her she should still take some precautions, even though she's now into her second trimester.

"She said it's something to be concerned about your whole pregnancy," recalls Smith. "You need to be in long sleeves, and long pants — wearing DEET." Smith was shocked to be advised to use the powerful insect-repellent.

"My first thought was, 'I'm pregnant! I'm not going to put DEET all over myself!' " Smith says. "But I guess that's what we do this summer."

She's now wondering if she and her two other kids should move to her parents' house for the summer — over in a less buggy part of Houston.

"The probability is low" that she'll contract Zika, Smith figures. "But the potential impact is so great — and those are the kinds of threats that can be scary and are, disproportionately, sort of taking up space in my brain."

Health officials say because U.S. cities have a lot of enclosed public spaces and residences with air conditioning or screens, most people are generally better shielded from mosquitoes than in some other countries. And Houston officials are already stepping up mosquito abatement efforts to further reduce the risk of mosquito-borne illnesses.

These are the same mosquitoes that can carry chikungunya and dengue viruses, federal health officials point out. And recent outbreaks of those illnesses on the U.S. mainland have been very small.

Nonetheless, doctors in Houston have already opened a special clinic where women who have traveled to countries where the Zika virus is actively spreading can get blood tests and counseling. A second clinic will open this summer.

Dr. Kjersti Aagaard, an ob-gyn and professor at Baylor College of Medicine, says doctors are offering those clinic patients an ultrasound exam 15 weeks into their pregnancy.

"We've actually developed a protocol around looking for very special views of the fetal brain and the eyes to look at for any evidence of fetal malformation with Zika," she says.

Aagaard says she reminds her patients that Zika is just one of many possible risks during pregnancy — and risks can be managed, whether that's through prenatal vitamins, genetic screening, or, in the case of Zika, window screens and bug spray.

Still, Zika is tough to talk about, she says, because research on the virus's effects on a pregnancy is still limited.

Despite the unknowns, doctors in Houston aren't advising people to avoid pregnancy.

What they are telling them is that they need to add mosquito bites to the list of cares and calculations that surround any pregnancy.

This story is part of NPR's reporting partnership with Houston Public Media and Kaiser Health News.