Accessibility links
Flu Shots For Expectant Mothers Protect Babies Later : Shots - Health News Babies are much less likely to get the flu in their first months of life if mom got a flu shot while she was pregnant, a study finds. Yet most expectant mothers don't get immunized. 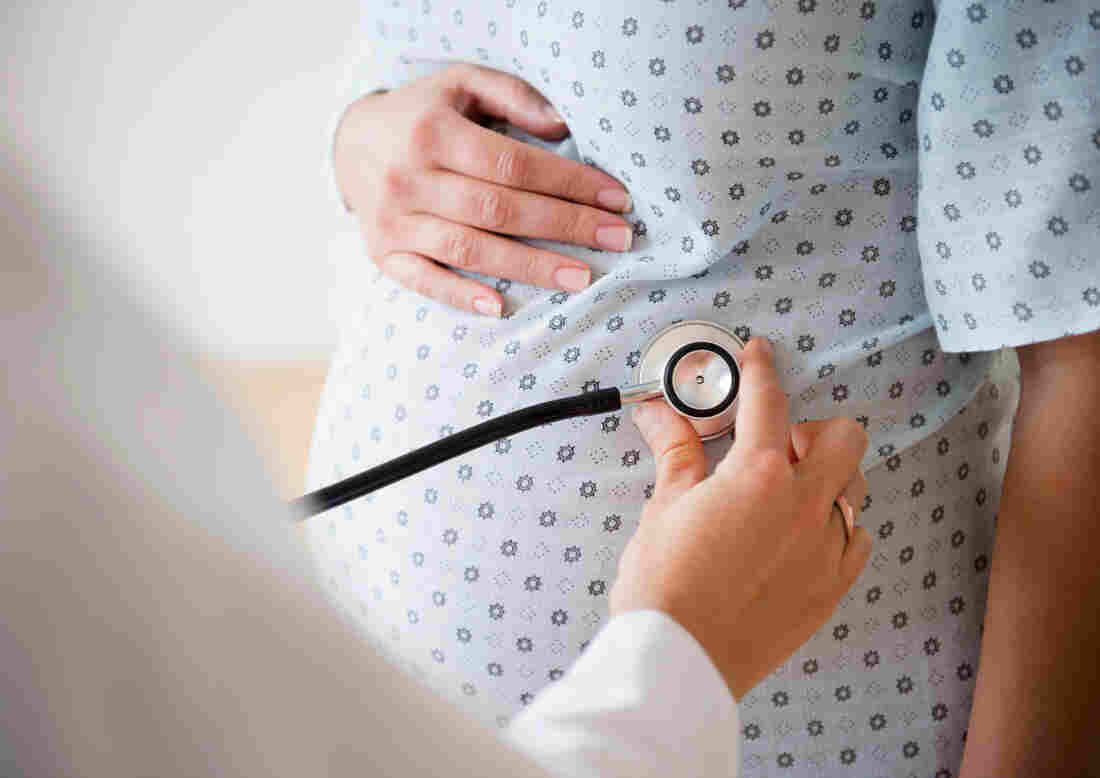 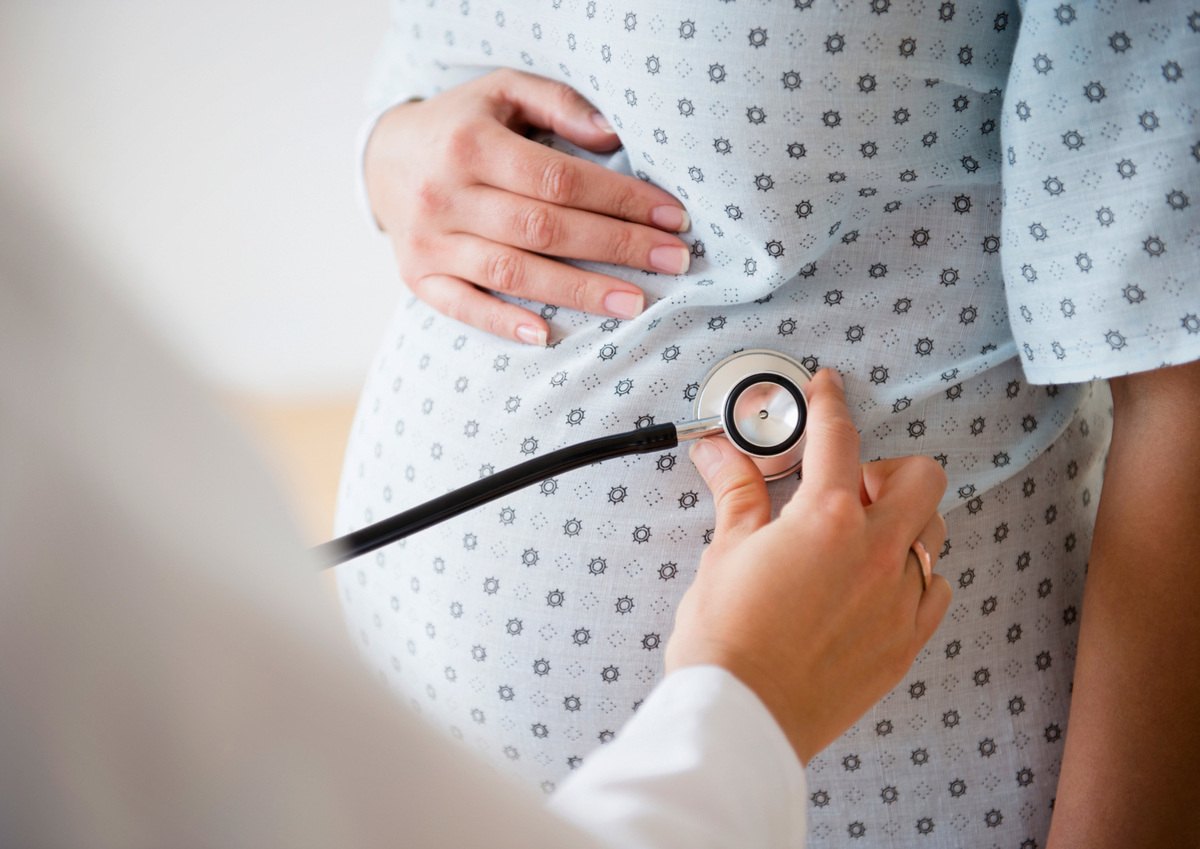 Doctors don't always suggest that pregnant women get flu shots, which may account for the relatively low vaccination rates.

Kimberly Richardson has never gotten a flu shot. Since she's healthy and considers the seasonal vaccines a "best-guess concoction" of the viruses expected to dominate, the northern California gym teacher and mother of two says she didn't want an "injection of something that may or may not keep me healthy in the long run."

She's not alone. In an analysis of 245,386 women who delivered babies at Utah and Idaho hospitals over nine flu seasons, 90 percent said they didn't get vaccinated for influenza while pregnant. Those who did reaped benefits — their babies were healthier. As a group, infants whose moms reported getting a flu shot during pregnancy had about one-third the risk of flulike illness during their first six months of life, compared to babies of unimmunized mothers.

Disease-fighting flu antibodies are a "gift the mom gives her baby across the placenta," says Julie Shakib, a pediatrician at the University of Utah School of Medicine who led the study, published this week in the journal Pediatrics.

In 2006, researchers at Kaiser Permanente published a similar analysis of 41,129 babies born between 1995 and 2001. But that study found no correlation between rates of infant illness and flu vaccination in expectant mothers.

This new analysis included six times as many babies and eight times as many vaccinated moms, notes Eric France, a pediatrician and preventive medicine physician with Kaiser Permanente Colorado and leader of the 2006 study. "This is the paper I wanted to write 10 years ago," he says. Larger studies tend to be more reliable because they're more statistically accurate.

Other prior studies have shown that babies do benefit from maternal immunization — including a 2008 trial in Bangladesh that randomized 340 pregnant women to receive a flu shot or a control vaccine. Randomized trials are considered the gold standard for clinical research. However, a study that assigns some participants a placebo flu vaccination would be considered unethical in the United States given the country's standard of care. Instead, most U.S. studies observe a particular group over time or survey a group retrospectively, as in the current study.

These analyses are challenging. First, it's hard to agree on what constitutes "flu." Do you count all babies that show up at the doctor's office with fever and cold symptoms? Do you restrict analysis to cases that were confirmed by lab testing or focus only on confirmed flu that required hospitalization? The new analysis looked at all three categories.

It also takes a long time to get enough cases for statistically sound results. In the new study, which tracked 249,387 babies under six months old who were born between December 2005 and March 2014, only 0.35 percent (866 babies) met criteria for the broadest classification—a diagnosis of "flu-like illness." A mere 0.26 percent (658 babies) had lab-confirmed flu, and among those cases less than a quarter (151 babies) were hospitalized because of their illness.

Furthermore, only 10 percent of expecting moms said they'd gotten a flu vaccine. Immunization rates were actually much lower during the first four years of the study—around 2 percent—but jumped to 21 percent over the five flu seasons after the 2009-2010 H1N1 pandemic. When H1N1 struck again in 2013-2014, about half of the pregnant women in the study reported getting vaccinated for flu.

"Over time we're actually encouraged by the improvement in providers' ability to deliver the flu vaccine and strongly recommend it," says Shakib. "There's been a culture shift." A recent study of postpartum women found that expecting moms were far more likely to get a flu shot if their prenatal care providers recommended it.

Still, given the low overall immunization rate across the current study, the researchers collected data more than eight years to get 866 babies with at least one flu-like illness. Among those, 96 percent (834 babies) were born to moms who didn't get a flu shot—which means 4 percent (32 babies) developed the flu despite their moms getting immunized while pregnant.

Now let's figure out how this translates to flu protection for babies.

If the flu vaccine had no impact on infant illness rates, you'd expect the percentage of flu-afflicted babies to equal the percentage of unimmunized moms. Under this assumption 10 percent (87 babies) should have been born to vaccinated mothers, since we know that 10 percent of mothers reported getting a flu shot. However, in reality there were only 32 infant flu cases among vaccinated mothers, which suggests that 55 babies—or 63 percent—were protected. Applying a similar analysis to lab-confirmed flu, the study found that maternal vaccinations led to a 70 percent reduction in infant illness.

So how does mom's flu shot protect her baby? After getting vaccinated, a pregnant woman makes specialized proteins called antibodies, which recognize flu viruses and boost the body's defenses against these pathogens. "Those antibodies can cross the placenta and go into the fetal circulation," says Mitch Kronenberg of the La Jolla Institute for Allergy and Immunology.

The protection babies receive is known as passive immunity. Unlike mom's defenses, which were "educated" to recognize viral proteins in the vaccine, the baby's immune system "didn't get trained but took something from the mother and used it," Kronenberg says.

Placental antibodies stick around in the baby for up to six months. They're thought to be different from the protective antibodies found in breast milk, which may help shape the immune system's relationship with gut-dwelling bacteria, according to a mouse study published Thursday by UC Berkeley researchers.

Shakib and coworkers have an ongoing study to determine if the immune protection a baby gets from maternal flu antibodies is stronger if mom breastfeeds. The researchers are analyzing blood and breast milk samples from 40 mother-infant pairs at the University of Utah Hospital. They expect to publish the results within a year, Shakib told NPR.