Accessibility links
Scientists Find Microbe That Functions Without Mitochondria : Shots - Health News Scientists have found the first eukaryotic organism that functions fine without mitochondria, the "powerhouses" that make energy for the cells of yeast, humans and other animals. 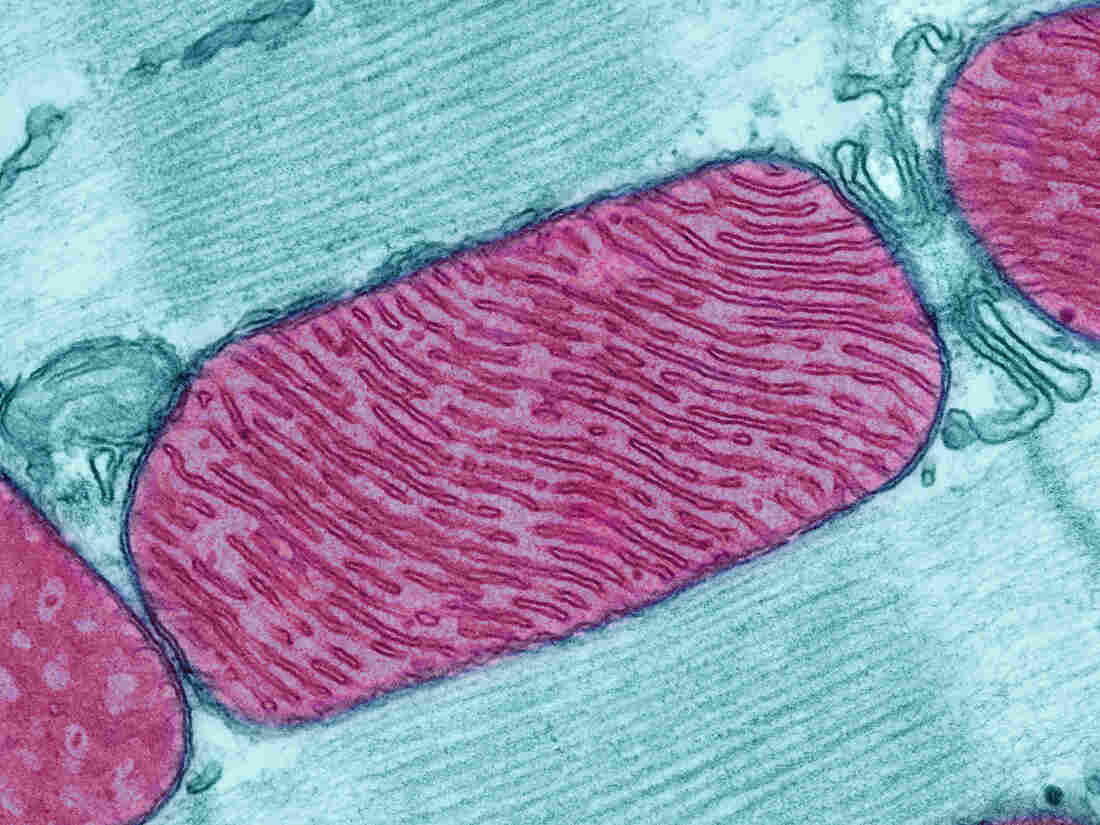 These mitochondria, in red, are from the heart muscle cell of a rat. Mitochondria have been described as "the powerhouses of the cell" because they generate most of a cell's supply of chemical energy. But at least one type of complex cell doesn't need 'em, it turns out. Science Source hide caption 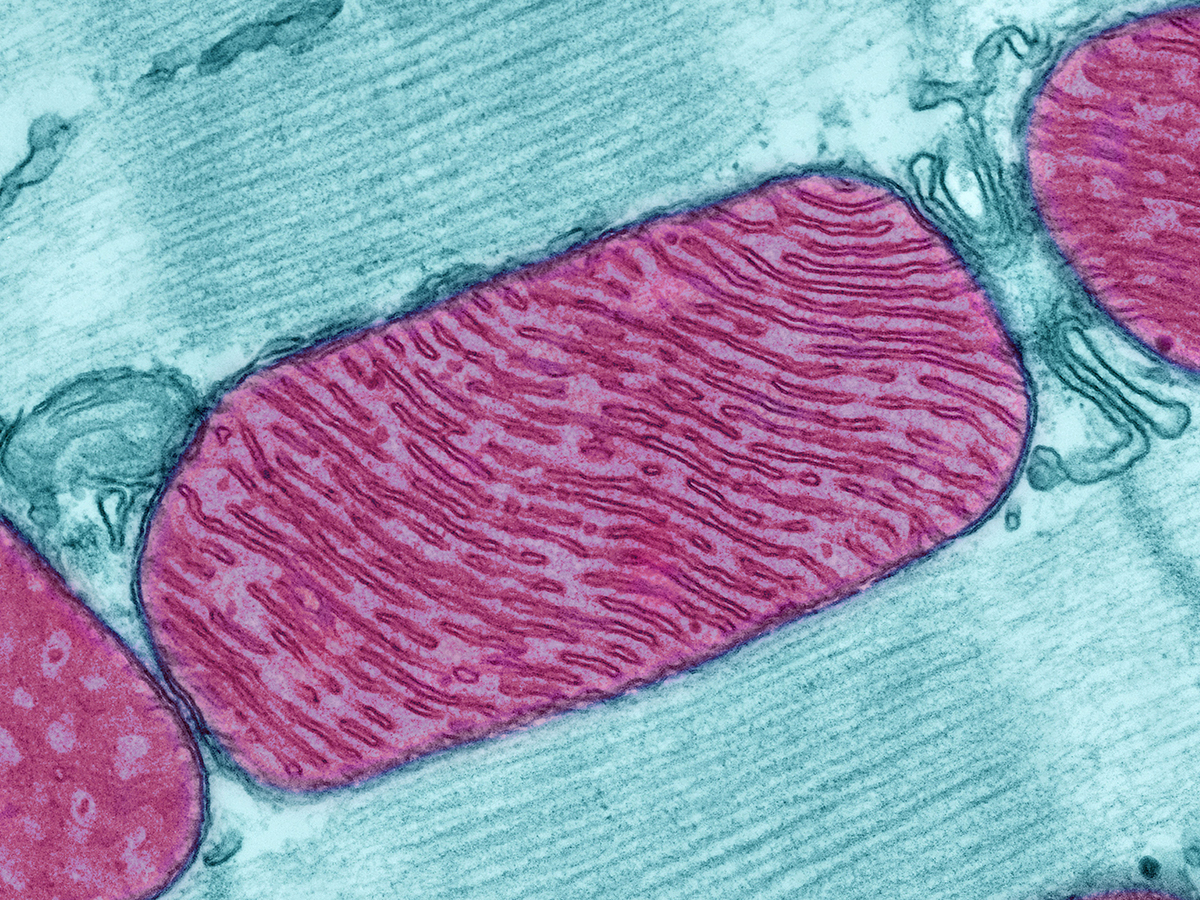 These mitochondria, in red, are from the heart muscle cell of a rat. Mitochondria have been described as "the powerhouses of the cell" because they generate most of a cell's supply of chemical energy. But at least one type of complex cell doesn't need 'em, it turns out.

Scientists have found a microbe that does something textbooks say is impossible: It's a complex cell that survives without mitochondria.

Mitochondria are the powerhouses inside eukaryotic cells, the type of complicated cell that makes up people, other critters and plants and fungi. All eukaryotic cells contain a nucleus and little organelles — and one of the most famous was the mitochondrion.

"They were considered to be absolutely indispensable components of the eukaryotic cell and the hallmark of the eukaryotic cell," says Anna Karnkowska, a researcher in evolutionary biology at the University of British Columbia in Vancouver. Karnkowska and her colleagues describe their new find in a study published online Thursday in the journal Current Biology. 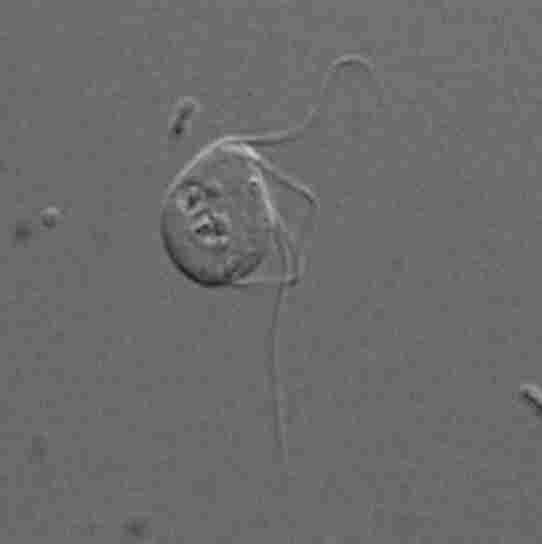 This is a light micrograph of the microbe that evolutionary biologists say lives just fine without any mitochondria. Naoji Yubuki/Current Biology hide caption 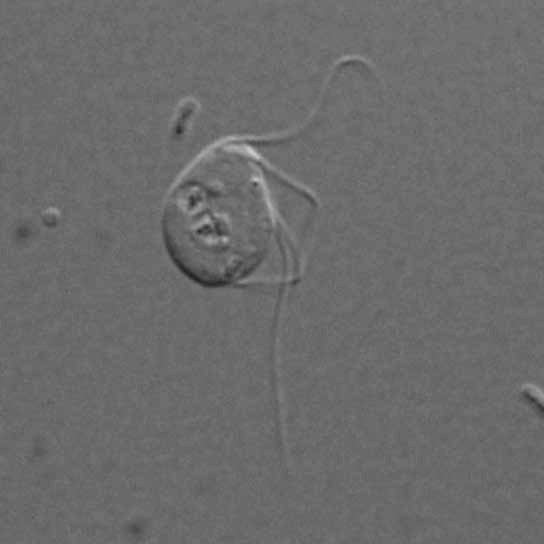 This is a light micrograph of the microbe that evolutionary biologists say lives just fine without any mitochondria.

Mitochondria have their own DNA, and scientists believe they were once free-living bacteria that got engulfed by primitive, ancient cells that were evolving to become the complex life forms we know and love today.

For decades, researchers have tried to find eukaryotic cells that don't have mitochondria — and for a while they thought they'd found some. One example is Giardia, a human gut parasite that causes diarrhea. It was considered to be a kind of living fossil because it had a nucleus but didn't seem to have acquired mitochondria. But additional studies on Giardia and other microbes showed that actually, the mitochondria were there.

"It turned out that all of them actually had some kind of remnant mitochondrion," says Karnkowska, who notes that mitochondria perform key jobs in the cell beyond just generating power.

A biggie is assembling iron-sulfur clusters for certain proteins, which is thought to be a mitochondrial function that's really essential. So even if a microbe powers itself in a different way and has a limited form of the organelle that isn't the same as the mitochondria found in people, Karnkowska says, "it's still a mitochondrion and it has some important function for the cell."

That kind of vestigial mitochondrion is what she expected to find when she was a researcher at Charles University in Prague and started investigating a particular gut microbe that had been isolated from a researcher's pet chinchilla.

After she and her colleagues sequenced the gut microbe's genome, however, they found no trace that it made any mitochondrial proteins at all. "So that's a great surprise for us," she says. "That should theoretically kill the cell — it shouldn't exist."

What they learned is that instead of relying on mitochondria to assemble iron-sulfur clusters, these cells use a different kind of machinery. And it looks like they acquired it from bacteria.

The researchers say this is the first example of any eukaryote that completely lacks mitochondria.

Michael Gray, a biochemist at Dalhousie University in Halifax, Nova Scotia, says the researchers have made a "compelling" case that they have a bona fide eukaryote without any vestige of a mitochondrion; he calls the finding "unprecedented."

"The observation is significant, in that it clearly demonstrates that a eukaryote can still be a eukaryote without having a mitochondrion," he tells Shots via email.

However, the results do not negate the idea that the acquisition of a mitochondrion was an important and perhaps defining event in the evolution of eukaryotic cells, he adds.

That's because it seems clear that this organism's ancestors had mitochondria that were then lost after the cells acquired their non-mitochondrial system for making iron-sulfur clusters.

"This is not the missing link of eukaryotic evolution," agrees Mark Van Der Giezen, a researcher in evolutionary biochemistry at the University of Exeter in the United Kingdom.

Still, he says, it is an example of how flexible life is.

"It lives in an area without oxygen and therefore can get rid of a lot of biochemistry that you and I would need in our cells to survive," says Van Der Giezen. "This organism managed to adapt in such a way that it could lose an organelle, which every textbook will tell you is an essential feature of eukaryotes. That's pretty amazing. It shows you that life is extremely creative in finding a way to eke out an existence."