Accessibility links
Despite $10B 'Fix,' Veterans Are Waiting Even Longer To See Doctors : Shots - Health News A $10 billion program to eliminate long wait times and other problems for veterans' health care hasn't worked out as planned. More veterans wait even longer for care now than they did a year ago. 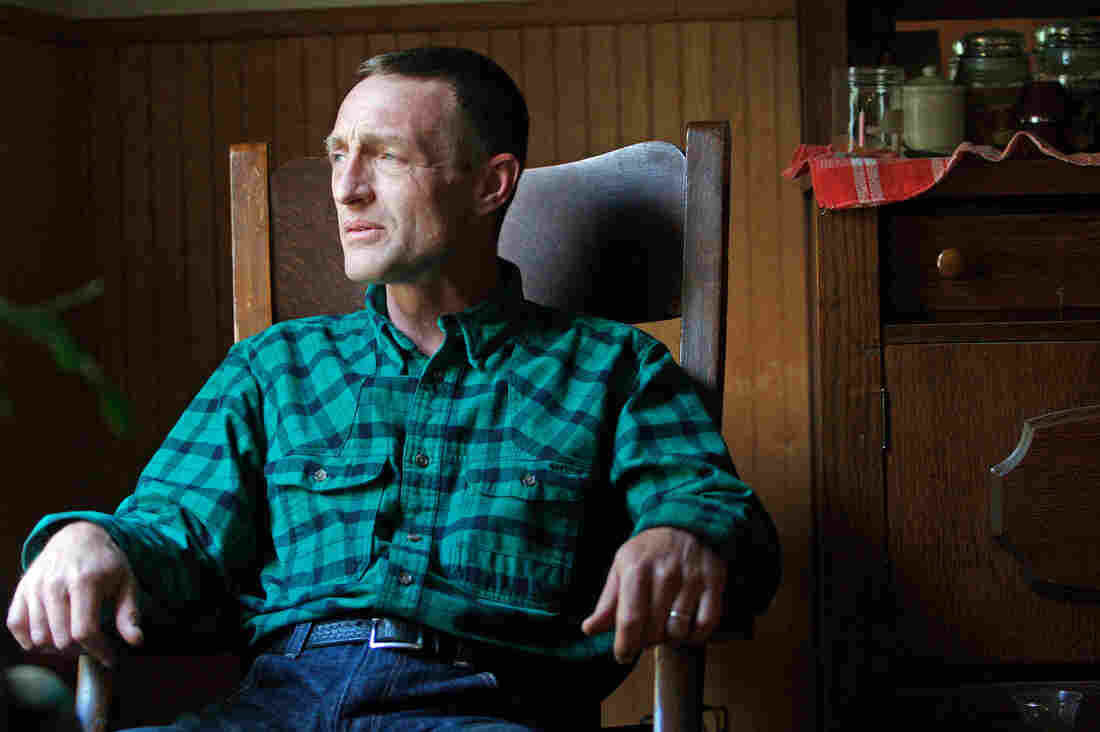 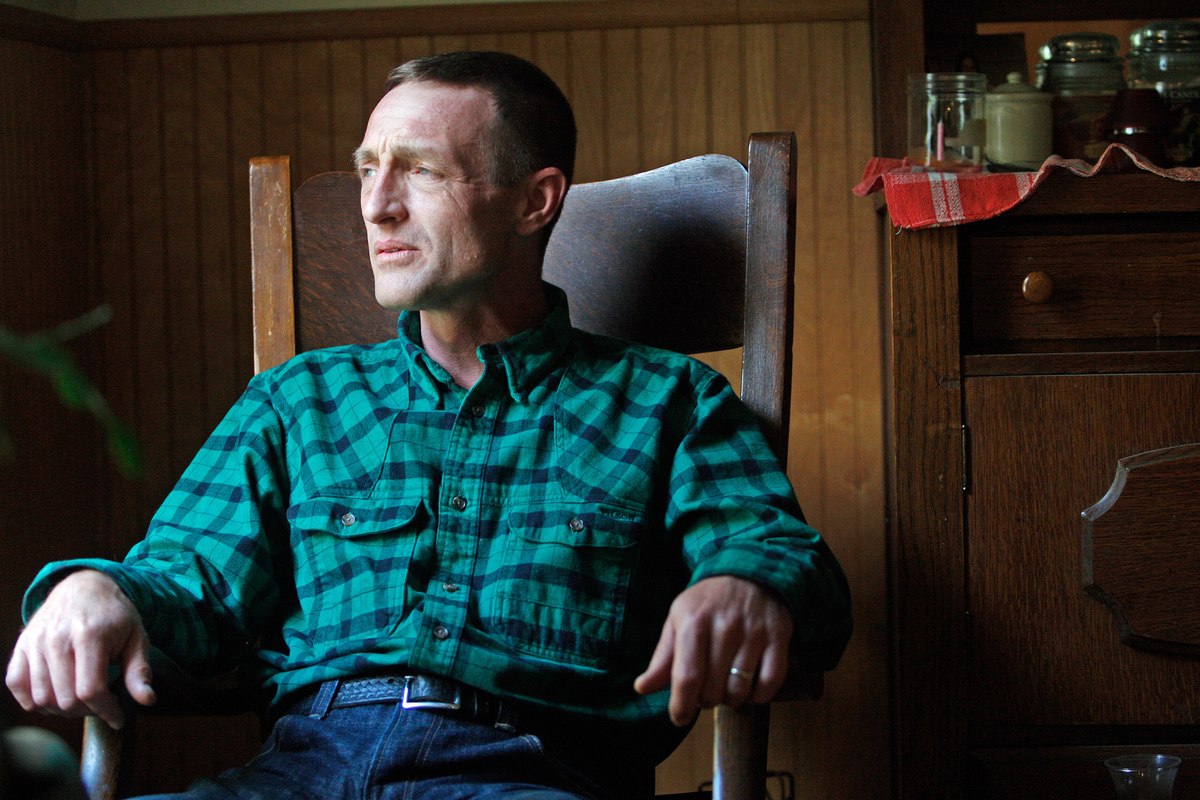 "Some days I wake up and go, 'Am I wasting time, when I could be on chemotherapy or getting a surgery?' " asks Tony Lapinski, a Montana veteran who worries about what is causing his severe back pain.

Many veterans are still waiting to see a doctor.

Two years ago, vets were waiting a long time for care at Veterans Affairs clinics across the country. At one facility in Phoenix, for example, veterans waited an average of 115 days for an appointment. Adding insult to injury, some VA schedulers were told to falsify data to make it look like the waits weren't that bad.

The whole scandal ended up forcing the resignation of Eric Shinseki, secretary of the Department of Veterans Affairs at the time.

Congress and the VA came up with a fix: Veterans Choice, a $10 billion program that was supposed to give veterans a card that would let them see a non-VA doctor if they were more than 40 miles away from a VA facility or they were going to have to wait longer than 30 days for a VA provider to see them.

There was a problem, though. Congress gave the VA only 90 days to set up the system. Facing that extremely tight time frame, the VA turned to two private companies to administer the program and help veterans get an appointment with a doctor and then work with the VA to pay that doctor.

Although the idea sounds simple enough, the fix hasn't worked out as planned. Wait times have gotten worse — not better. Compared with this time last year, there are 70,000 more appointments that took vets at least a month to be seen.

The VA says there has been a massive increase in demand for care, but it's apparent the problem has more to do with the way Veterans Choice was set up. The program is confusing and complicated. Vets don't understand it, doctors don't understand it, and even VA administrators admit they can't always figure it out.

The problems are evident in Montana, which has more veterans per capita than any state except Alaska.

This winter, when Montana Sen. Jon Tester sent his staff to meet with veterans across the state, Bobby Wilson showed up at a session in Superior. Wilson, a Navy vet who served in Vietnam, is trying to get his hearing aids fixed.

But he says he is mired in bureaucracy. "The VA can't do it in seven months, eight months? Something's wrong," he says. "Three hours on the phone," trying to make an appointment. "Not waiting," he says, "talking for three hours trying to get this thing set up for my new hearing aids."

Tony Lapinski, a former aircraft mechanic with the Air Force, has waited for answers on the phone with Health Net, one of the two contractors the VA selected to help Veterans Choice patients.

"You guys all know the Health Net piano?" he says. "They haven't changed the damn elevator music in over a year!" That elicits knowing chuckles from the audience. In an interview later, he says, "They are the nicest boiler-room telemarketers you have ever spoken to. But that doesn't get your medical procedure taken care of."

Lapinski has an undiagnosed spinal growth, and he is worried. "Some days I wake up and go, 'Am I wasting time, when I could be on chemotherapy or getting a surgery?' " he says. "Or six months from now when I still haven't gotten it looked at and I start having weird symptoms and they say, 'Boy, that's cancer! If you had come in here six months ago, we probably could have done something for ya, but it's too late now!' " 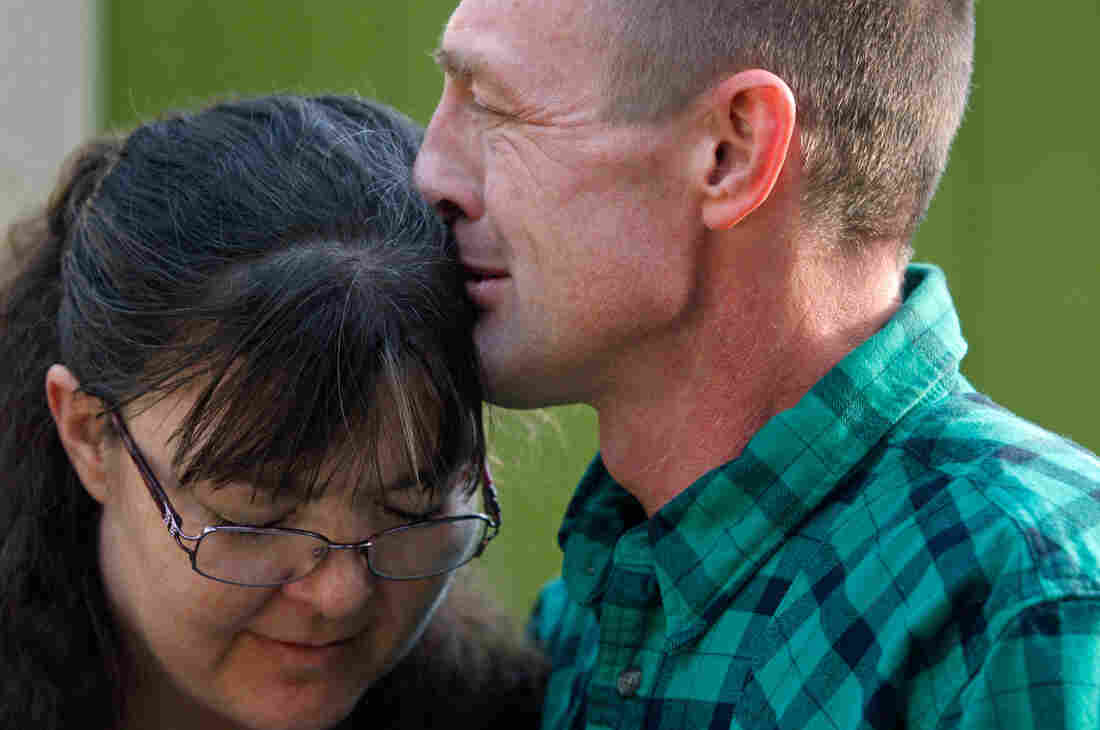 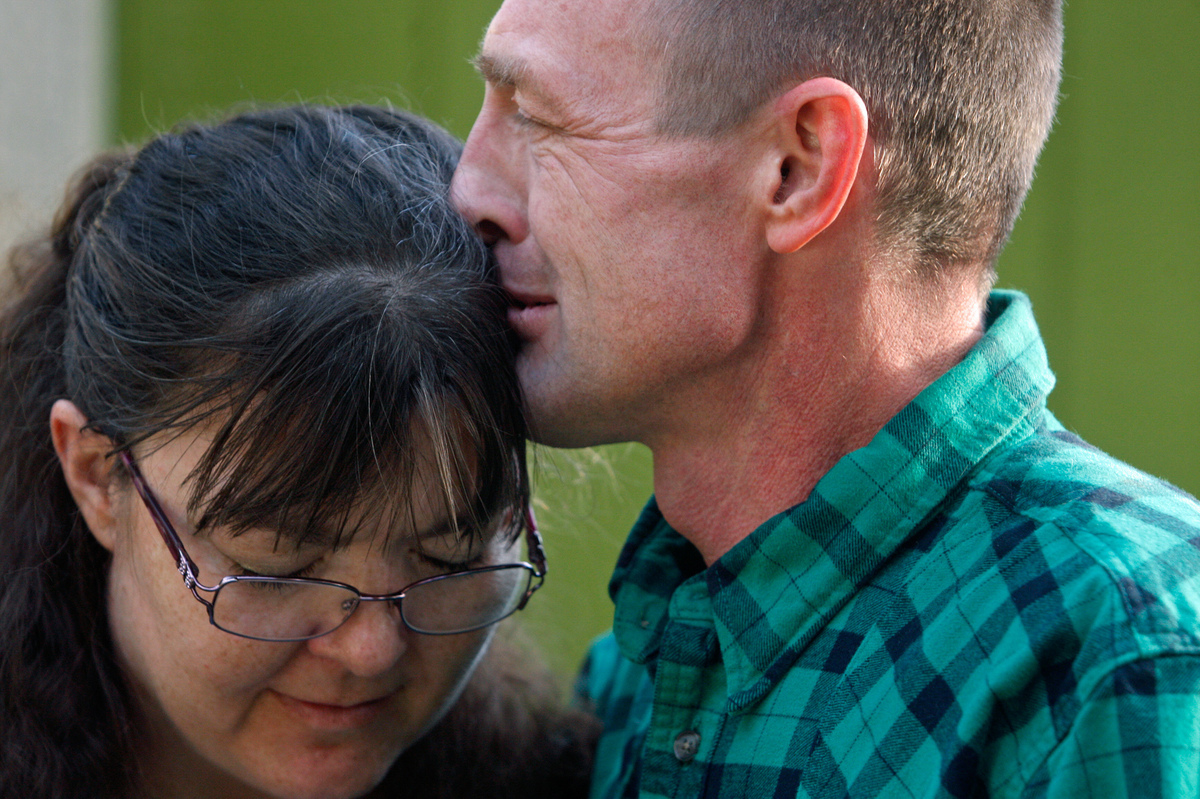 Lapinski kisses his wife, Michelle, at their home in Superior, Mont.

Lapinski finally got to a neurosurgeon, but he didn't exactly feel like his Choice card was carte blanche. Doctors, it turns out, are waiting, too — for payment, he says.

"You get your procedure done, and you find out that two months later the people haven't been paid. They have got $10 billion that they have to spend, and they are stiffing doctors for 90 days, 180 days, maybe a year!" says Lapinski. "No wonder I can't get anyone to take me seriously on this program."

He says he gets it. He used to do part-time work fixing cars, and he would still take jobs from people who had taken more than 90 days to pay him or bounced a check. But he did so reluctantly.

"I had a list of slow-pay customers," he says. "I might work for them again, but everybody else came before them. So why would it be any different with these health care professionals?"

Hospitals, clinics and doctors across the country have complained about not getting paid, or getting paid very slowly. Some have just stopped taking Veterans Choice patients altogether, and Montana's largest health care network, Billings Clinic, doesn't accept any VA Choice patients.

Not cool, Tester says of Health Net and other contractors.

"The payment to the providers is just laziness," he says. "I'm telling you, it's just flat laziness. These folks turn in their bills, and if they're not paid in a timely manner, that's a business model that'll cause you to go broke pretty quick."

The VA now admits the rushed time frame led to decisions that resulted in a nightmare for some patients.

Health Net declined to be interviewed for this story. But in a statement, the company says the VA has recently made some beneficial changes that are helping to streamline Veterans Choice. For example, the VA no longer demands that a patient's medical records be returned to VA before it pays the bill.

Meanwhile, though, veterans continue to wait. "If I knew half of what I knew now back then when I was just a kid, I would've never went in the military," says Wilson. "I see how they treat their veterans when they come home."

Scheduling Lags Also Irk The Doctors' Offices And The VA

On the other side of the coin, doctors are frustrated in dealing with another government health care bureaucracy.

In Gastonia, N.C., Kelly Coward, a surgery scheduler at Carolina Orthopaedic & Sports Medicine, dials yet another veteran with bad news.

"I'm just calling to let you know that I still have not received your authorization for Health Net federal. As soon as I get it, I will give you a call and let you know that we have it and we can go over some surgery dates," she tells a veteran.

The practice sees about 200 veterans. Dealing with Health Net has become a time-consuming part of her job.

"I have to fax and re-fax, and call and re-call. And they tell us that they don't receive the notes. And that's just every day. And I'm not the only one here that deals with it," she says.

Carolina Orthopaedic's business operations manager, Toscha Willis, is used to administrative headaches. They're part of the deal with health care, she says, but she's never seen something like this.

It takes "multiple phone calls, multiple re-faxing of documentation, being on hold one to two hours at a time to be told, 'We don't have anything on file,' " she says. "But the last time we called about it, they had it, but it was in review. You know, that's the frustration."

It can take three to four months just to line up an office visit.

The delays have become a frustration within the VA, too. Tymalyn James, a nurse care manager at the VA clinic in Wilmington, N.C., says Choice has made the original problem worse. When she and her colleagues are swamped and refer someone outside the VA, it's supposed to help the veteran get care more quickly. But James says the opposite is happening.

"The fact is that people are waiting months and months, and it's like a — we call it the black hole," she says. "As long as the Choice program has gone on, we've had progressively longer and longer wait times for Choice to provide the service, and we've had progressively less and less follow-through on the Choice end with what was supposed to be their managing of the steps."

The follow-through is lacking in two ways. The first is the lengthy delay in approving care. And after that's finally resolved, there's a long delay in getting paid for the care.

At least 30 doctors' offices across North Carolina are dealing with payment problems, some that have lasted more than a year.

Carolina Orthopaedic's CEO Chad Ghorley says his practice is getting paid after it provides the care. It's the lengthy delay on the front end that puts a burden on the staff and, he worries, puts veterans at risk. He's a veteran himself.

Those experiences for both veterans and providers are typical. Congress is now working on a solution to the original solution: A bill is expected to clear Congress by the end of the month.

This is part of a collaboration with NPR's Back at Base project, local member stations and Kaiser Health News.