Accessibility links
Insurers Leaving An Exchange May Still Sell Individual Plans : Shots - Health News Some insurers continue to sell coverage to individuals on the open market even after deciding to exit the health law's marketplaces. 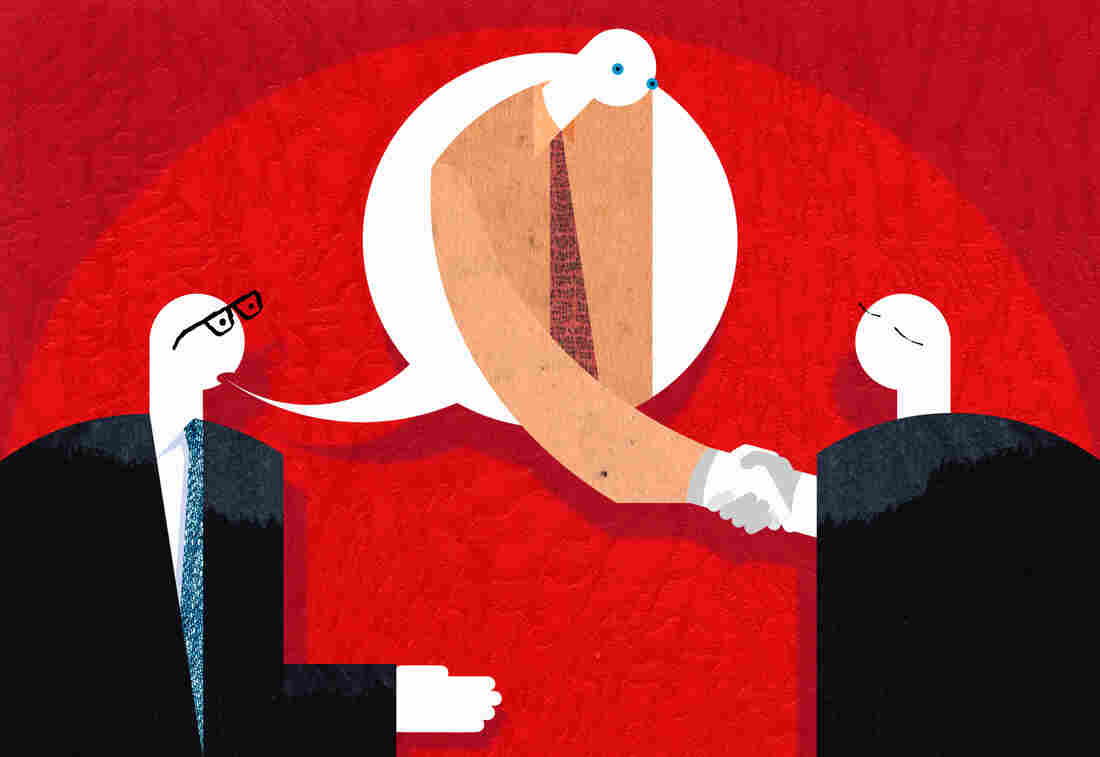 "He's off the exchange but will sell you a plan anyway." Jonathan McHugh/Getty Images/Ikon Images hide caption 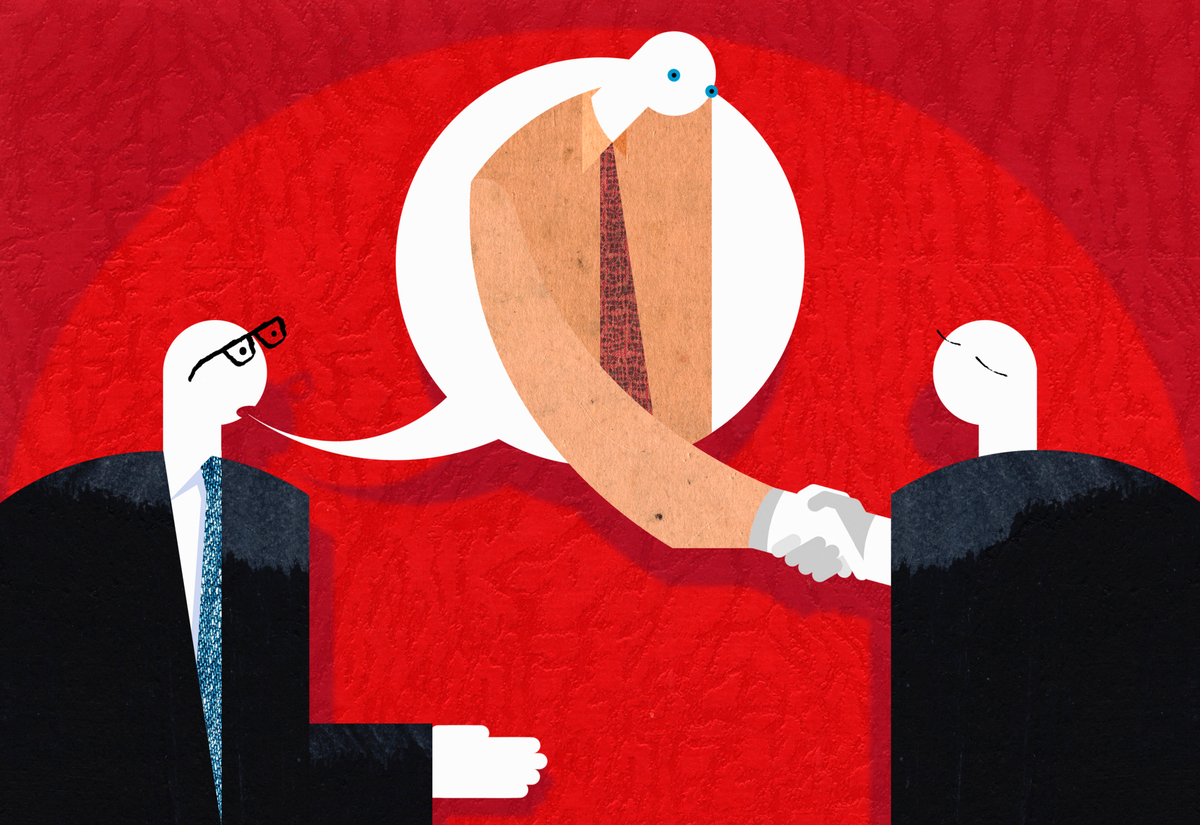 "He's off the exchange but will sell you a plan anyway."

When insurers pull out of the health law marketplaces, will customers buying plans outside those exchanges lose access, too? And do families have to meet two deductibles if each spouse has a separate insurance plan? Here are the answers.

I see story after story about insurance companies leaving some state health insurance exchanges, but does that mean they'll stop selling health insurance on the individual market altogether? Will these companies' policies still be an option for those of us who buy coverage off of the exchange since, for example, we don't qualify for subsidies?

An insurer's decision to stop selling plans on the marketplace doesn't necessarily mean it will stop selling individual coverage in that state altogether. This year, for example, Aetna stopped selling individual plans on the marketplaces in Kansas, Utah and Washington, D.C. But the company continues to sell individual policies outside the marketplaces in Kansas and Utah, said T.J. Crawford, a spokesman for Aetna. However, it stopped selling off-exchange plans in the District, which requires insurers selling on the individual and small group markets to offer their products on the exchange. A handful of other states require insurers to sell similar plans on and off the exchange.

Aetna last week announced that it intends to continue selling policies on the exchanges in at least 15 states. UnitedHealthcare and Humana, on the other hand, have said they expect to withdraw from a number of state exchanges but have not specified which ones yet. A spokesperson for UnitedHealthcare said that no one was available to comment on its plans, and Humana didn't respond to a request for comment.

Insurers have taken different approaches to date on offering individual coverage only on the exchange versus both on and off the exchange, said Paul Rooney, vice president for carrier relations at eHealth.com, which sells such plans outside the exchanges. No matter where they're sold, all individual plans have to meet health law standards, including covering the 10 essential health benefits. Although the plans are similar in many ways, provider networks may be broader in some off-exchange plans, said Rooney.

Since the Affordable Care Act passed, my employer won't allow me to cover my spouse because she has coverage through her employer. I have a family plan with a high deductible. Is there any provision in the law to link her policy and mine? We have met the family deductible and family out-of-pocket maximum on the plan that covers me and the kids. It doesn't seem fair that we would have to meet her deductible also.

There's no way to link your two policies under the health law. In order to pick the best coverage for your family between the plans offered by both employers, you need to consider several factors, including the premium, deductible and out-of-pocket maximum, and how those amounts change depending on which family members are covered under which policy.

In high-deductible plans, the kind that are typically linked to a health savings account, it's particularly important to consider how that family deductible works, said Tracy Watts, a senior partner at benefits consultant Mercer. If the plan has a $6,000 deductible, for example, it may be that the entire deductible must be satisfied before the plan starts to pay claims for any family member other than for preventive care. In contrast, a traditional plan with a family deductible of say, $3,000, might "embed" individual deductibles of $1,000 per family member within that total and begin paying benefits sooner.

If one family member is likely to need expensive care, running the numbers can be especially important. "If they have someone who they know is going to need coverage, it's important to make sure they're in most advantageous plan," Watts said.

Regardless of the amount of the family deductible, the maximum amount that any one person can be required to pay out-of-pocket is $6,850 in 2016.

It's worth noting that a growing number of employers are discouraging workers from covering spouses who have insurance available through their own jobs. In 2016, 7 percent of employers didn't offer coverage to workers' spouses who had insurance available elsewhere, and 44 percent said they were considering it, according to a survey by benefits consultant Aon Hewitt. Another 17 percent charged spouses extra if they had other coverage available, and 47 percent said they were considering extra charges.

Why can't consumers change health insurance every month if they want to, like they can with auto and homeowners insurance?

The issues for these types of insurance are not the same.

Most people buy or renew their health insurance during an annual open enrollment period and generally have to stick with that plan all year.

If people could switch health plans whenever they wished, there would be nothing to stop them from buying a plan with minimal coverage and a low premium, then trading up to a pricier, more generous plan if they got sick, said Penny Gusner, a consumer analyst at insure.com, a website that provides information about insurance and insurers, who may pay for placement or leads.

"It would destabilize the marketplace," Gusner said, since some insurers would end up paying for a disproportionate number of sick people.