Accessibility links
Autism Can Be An Asset In The Workplace, Employers And Workers Find : Shots - Health News Roughly 40 percent of young adults with autism spectrum disorder aren't finding jobs. But some employers are now recruiting adults on the spectrum as an untapped talent pool of focused workers. 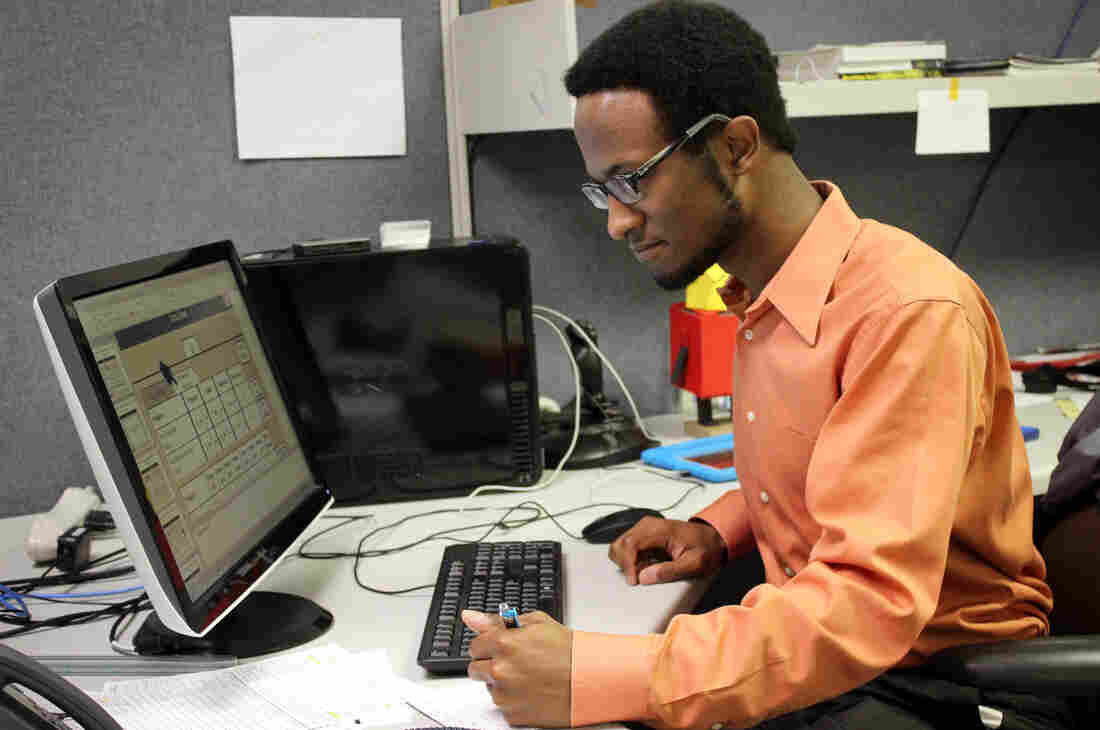 Gerald Franklin, who was diagnosed with autism as a child, is now lead developer for a website that matches workers with prospective employers. Job-related videos, he says, can help people with special needs showcase their talent. Courtesy of Gerald Franklin hide caption 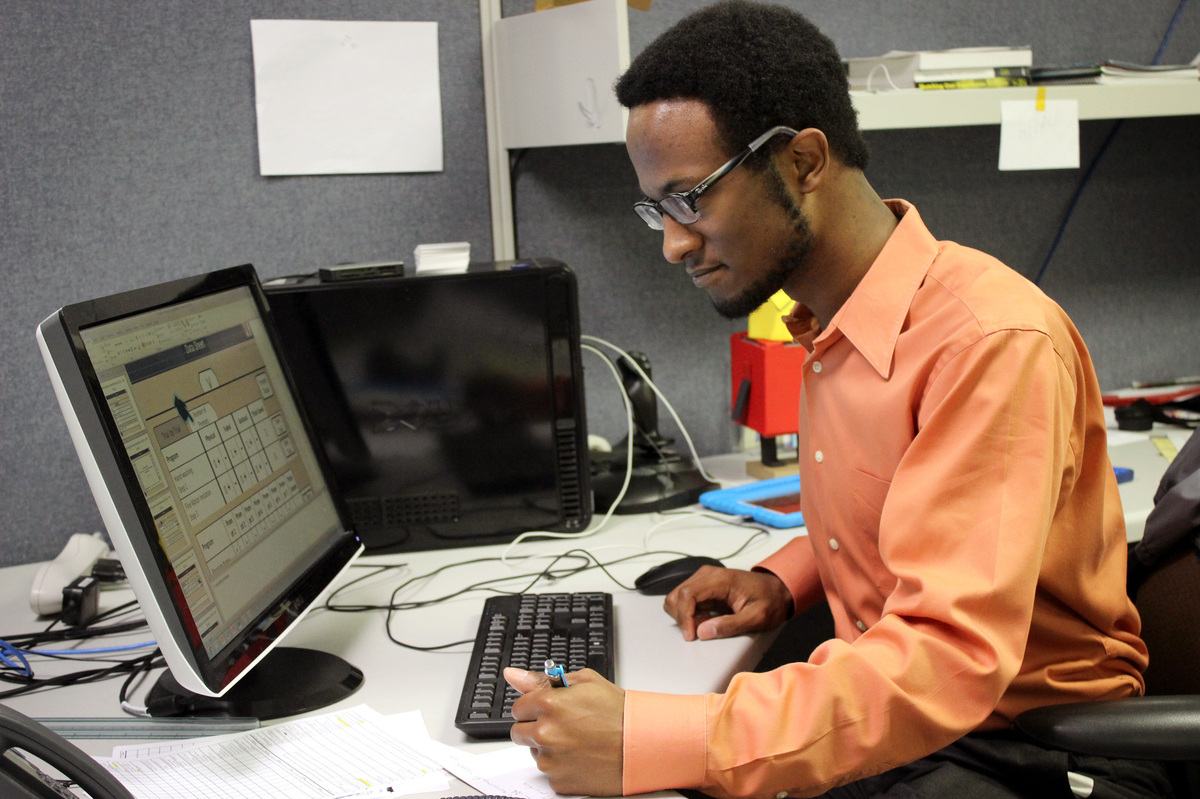 Gerald Franklin, who was diagnosed with autism as a child, is now lead developer for a website that matches workers with prospective employers. Job-related videos, he says, can help people with special needs showcase their talent.

As the population of people diagnosed with autism spectrum disorder keeps growing, so does the number of people with that diagnosis who aren't finding employment.

Though many young adults on the spectrum are considered high functioning, recent research shows 40 percent don't find work — a higher jobless rate than people with other developmental disabilities experience.

Research scientist Anne Roux, of the A.J. Drexel Autism Institute in Philadelphia, studies young adults with autism and was the lead author of that study.

"When we learned that last year — that about 40 percent of people were never getting employment or continuing their education — we wondered, 'Why is that, and what happens to them?' "

Young people on the spectrum — just like other young people — are eager to live independently and work, she and her team found as they looked deeper. But social services aimed at helping children overcome early deficits in communication and problems with social skills become less available as those students get older.

"Once you develop into an adult, those resources plummet," says Leslie Long, vice president of adult services for the advocacy group Autism Speaks.

An estimated 50,000 people on the spectrum enter adulthood every year. Face-to-face job interviews can be a challenge for many, Long says, and some engage in repetitive behaviors, which can seem odd to the uninitiated.

But those idiosyncrasies sometimes mask hidden talents, she says — like intense focus, or a facility with numbers and patterns.

"I mean, look at what happened with the housing bubble and the financial market," she points out. "It was a man on the spectrum who saw which mortgages were going to fall. And I don't think that's something an average person would have been able to do."

That particular case — of Dr. Michael Burry, the physician and hedge fund manager featured in the book and movie The Big Short — is in many ways exceptional, Long admits. (Burry has a son with Asperger's syndrome and has said he believes he fits the diagnosis as well.)

Still, with baby boomers starting to retire, and with talent in increasingly short supply, companies as varied as Microsoft, Walgreens, Capital One, AMC Theaters, and Procter & Gamble are all starting to actively recruit people who have autism spectrum disorder. They aren't yet putting a lot more people to work, but their recruiting and training programs are becoming models for other firms.

Take, for example, Bank of America's support center in Dallas, which prints, checks and sorts reams upon reams of paperwork regarding bank customers. The work involves, as manager Duke Roberson says, "a lot of paper handling."

All the members of Roberson's staff of 75 have some form of disability. His workers with high-functioning autism, he says, tend to be aces at catching errors — and they enjoy the repetition.

"I tell my guys as we start in the morning, 'We do the same thing the same way, every day,' " Roberson says.

Methodical tasks others might find monotonous, these workers find comforting.

"I have one individual who, when he comes in, has to have the same seat every day or it kind of upsets his whole day," Roberson says.

Turnover within Roberson's team is incredibly low, and performance, profitability and morale are good.

"There's no charity to this at all," he says.

The company Specialisterne USA helps people with autism find work as consultants "in information technology and other sectors with technically oriented tasks and jobs," its website says. Executive Director Mark Grein says accommodating a worker with autism is often as simple as adjusting lighting to prevent overstimulation or permitting frequent breaks.

"Our recommendation is just clear communication in terms of expectations," Grein says of his advice to companies. "Be able to provide rules." It also helps, he says, to train co-workers beforehand, and to provide a mentor who can help the worker with autism ease into the workplace.

Grein says he has successfully placed hundreds of workers and hopes to eventually reach a goal of 250,000 people.

Getting past the obstacles of a conventional job search, however, can be hard. Last year, Autism Speaks launched thespectrumcareers.com, a website to match workers who have autism with prospective employers.

Gerald Franklin, who is 24, is the website's lead developer. Among other helpful aids, he says, the site allows job seekers to post videos.

"Video played a huge role in helping people with special needs showcase what they can do," Franklin says.

He was diagnosed with autism at age 4 and says he has developed workarounds over the years for communicating with his team without long explanations.

"I would try to explain something really cool or interesting to someone, but they did not understand," he says. "So, it would be making lots of drawings, making lots of notes — and my team members are extremely appreciative."

Franklin sees his autism as an asset. It gives him insight, he says, into creating tools that can help others.

A previous version of this story misspelled the name Procter as Proctor.