Accessibility links
This Machine Spits Out Pills In A Whole New Way : Shots - Health News A refrigerator-sized machine could someday make lifesaving drugs on site when outbreaks occur or where medicine is in short supply, like on the battlefield. 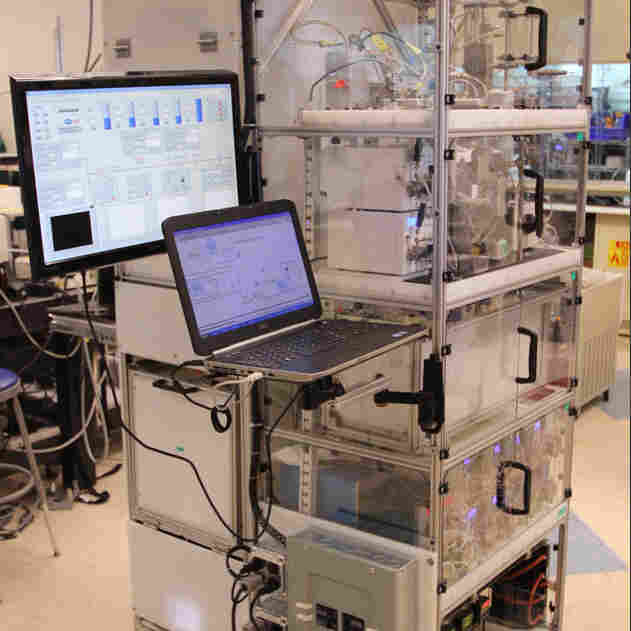 This prototype built by MIT researchers can be reconfigured to manufacture different types of pharmaceuticals. Courtesy of the Allan Myerson lab hide caption 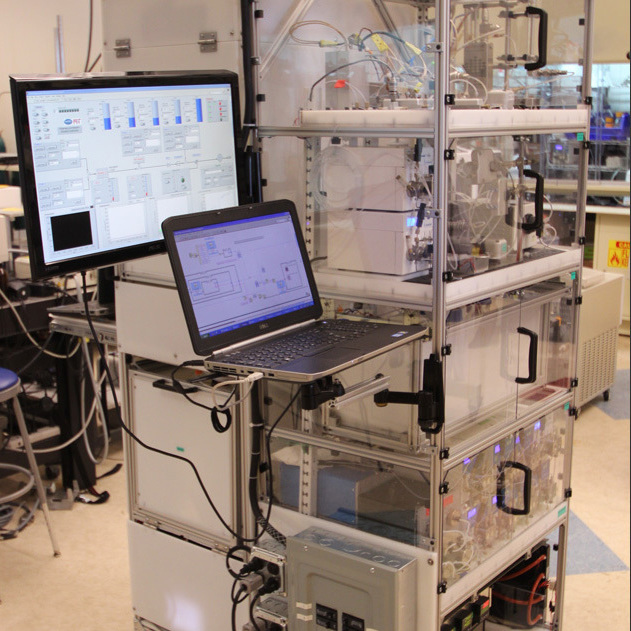 This prototype built by MIT researchers can be reconfigured to manufacture different types of pharmaceuticals.

Courtesy of the Allan Myerson lab

In a lab at the Massachusetts Institute of Technology, all the work that happens in a vast pharmaceutical manufacturing plant happens in a device the size of your kitchen refrigerator.

And it's fast. This prototype machine produces 1,000 pills in 24 hours, faster than it can take to produce some batches in a factory. Allan Myerson, a professor of chemical engineering at MIT and a leader of the effort, says it could become eventually an option for anyone who makes medications, which typically require a lengthy and complex process of crystallization.

"We're giving them an alternative to traditional plants and we're reducing the time it takes to manufacturer a drug," he says.

The Defense Department is funding this project because the devices could go to field hospitals for troops, hard-to-reach areas to help combat a disease outbreak, or be dropped at strategic spots across the U.S.

"If there was an emergency you could have these little plants located all over. You just turn them on and you start turning out different pharmaceuticals that are needed," Myerson says.

Sounds simple? It's not. This mini drug plant represents a sea change in how medications have been made for a long time.

That's the way virtually all pharmaceuticals are made. Big batches of chemicals are synthesized, then they have to cool down, then are synthesized again to create new compounds. Then those compounds have to crystallize, filter and dry. Powders are added to make a tablet or capsule. These steps that can take months. This new device, says Jamison, produces medicine in one fast continuous process.

"We had to figure out new ways to make molecules, new ways to think about making molecules but from my perspective that has also provided us with a lot of opportunities that are very powerful," says Jamison. His lab and Myerson's also are collaborating with the Novartis- MIT Center for Continuous Manufacturing, which is funded by the pharmaceutical company Novartis.

The prototype raises the possibility that hospitals and pharmacies could make their own pills as needed, says James McQuivey, an analyst at Forrester Research.

"If it can done at lower cost, here's one way at least that we could reduce the exorbitant cost of medications and that could a social good as well as an economic good," McQuivey says.

Most of the cost of an expensive drug is not the materials or manufacturing or transportation says McQuivey; it's in the drug makers' monopoly control. So, he says, "If we can distribute the manufacturing of anything, pharmaceuticals included, so that more people have the opportunity to manufacture it, now there will be competition among those manufacturers."

Drug makers have at least two big concerns about the widespread use of this device, says Dr. Paul Beninger, who oversees pharmaceutical safety at manufacturer Genzyme Sanofi. He said first and foremost, the drug industry worries about intellectual property rights.

Drug manufacturers own exclusive rights to produce the drugs they develop for a period of time, typically three to five years depending on how much is new in the drug. His other worry is safety, including monitoring of machines to ensure quality and safety.

"There are some really significant issues that this MIT project has to deal with if they're going to try and make this a successful venture," he says.

MIT researchers say continuous monitoring would be built into the continuous production process. The Food and Drug Administration is working on how to oversee this type of process.

On the patent concern, MIT developers say the device is being tested to make generic drugs for now, but that pharmacies or hospitals might someday license the right to produce drugs that have just been approved, not existing ones.

For now, their focus is on making an even smaller more portable unit, producing more and more complex drugs and seeking FDA approval for the device.