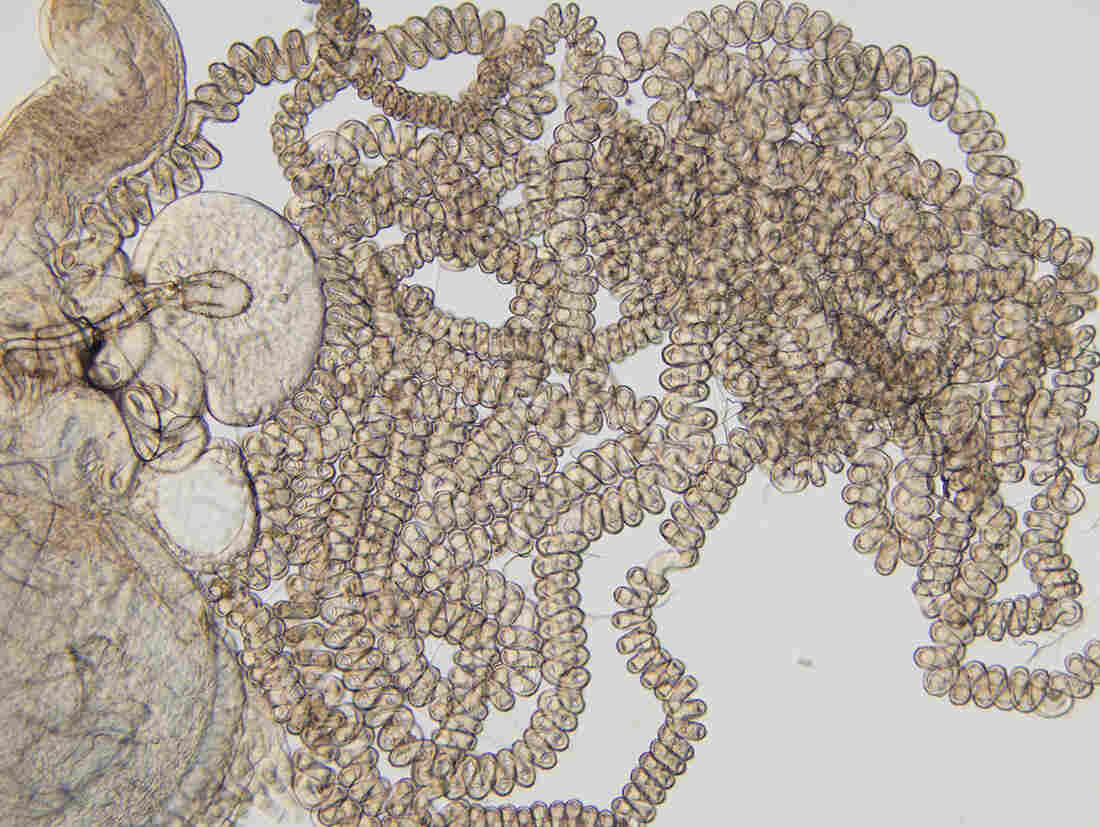 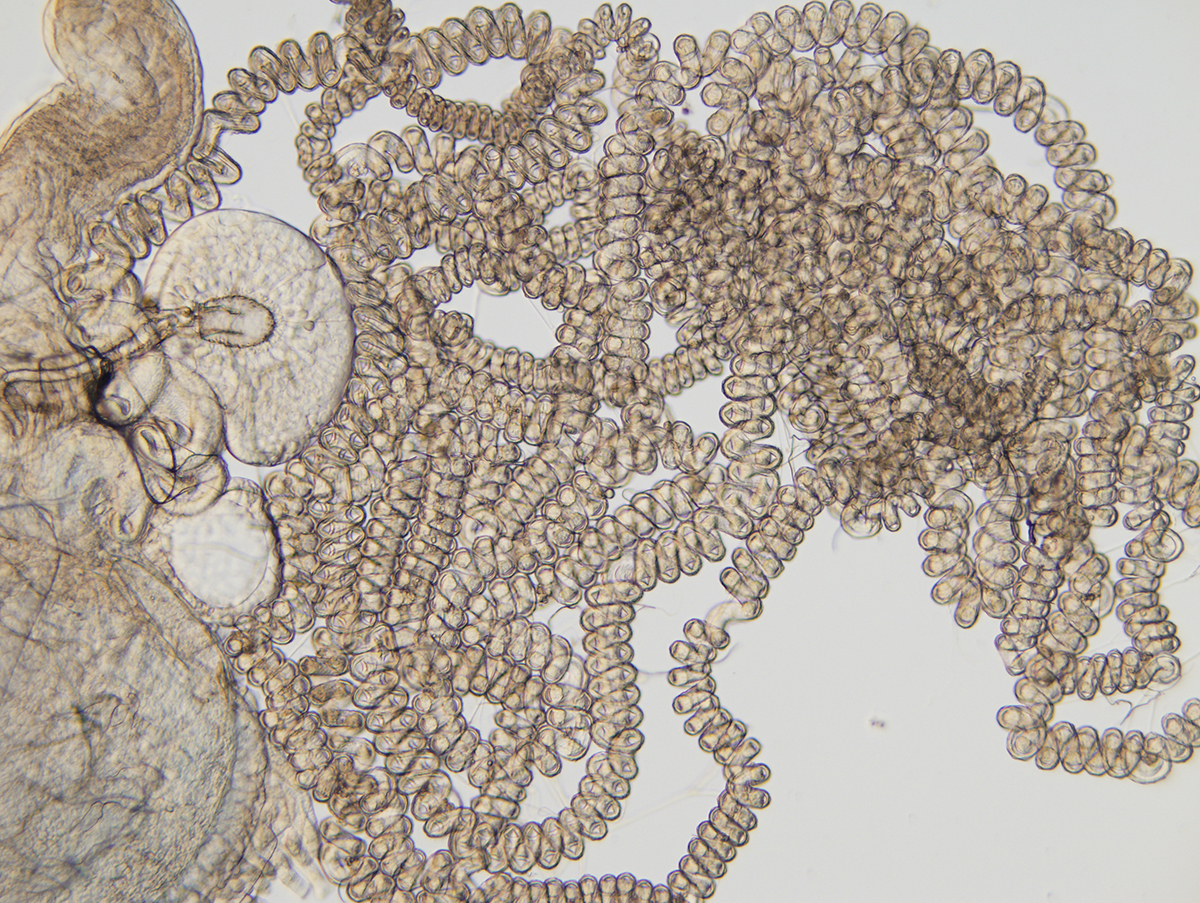 Female Drosophila bifurca flies have an organ to store sperm (right) that male flies compete to fill, crowding out rivals.

You can't help but notice that Scott Pitnick has a big tattoo. It's a sperm with a long tail that winds down his right arm.

People sometimes stare. "And when I tell them what it is, they either are very interested or they pivot on their heel and walk away," says Pitnick, an evolutionary biologist at Syracuse University. "All eye contact ceases."

Some people just don't like talking about sperm. But not him. He's spent his career trying to unravel the mystery of giant sperm.

The sperm are made by some fruit fly species, and they can be more than 2 inches long — or 20 times the length of the fly's body. The massive sperm get rolled up like a ball of yarn, and they're so costly to make that males produce very few of them.

"I mean, every decent scientist I know has this dogma-busting streak," says Pitnick. "And so you always have your eyes out for something that doesn't make any sense, that doesn't jive with prevailing theory."

And these bizarre sperm defied easy explanation. After all, males in most species typically produce tons of sperm. An adult man, for example, makes millions of new sperm each day. It's generally the females that produce relatively few eggs.

"So for me, discovering species where males have this very female-like reproductive strategy of producing very few high-investment gametes, or sperm, was a thrilling moment," says Pitnick.

The question was, why do the flies do this? 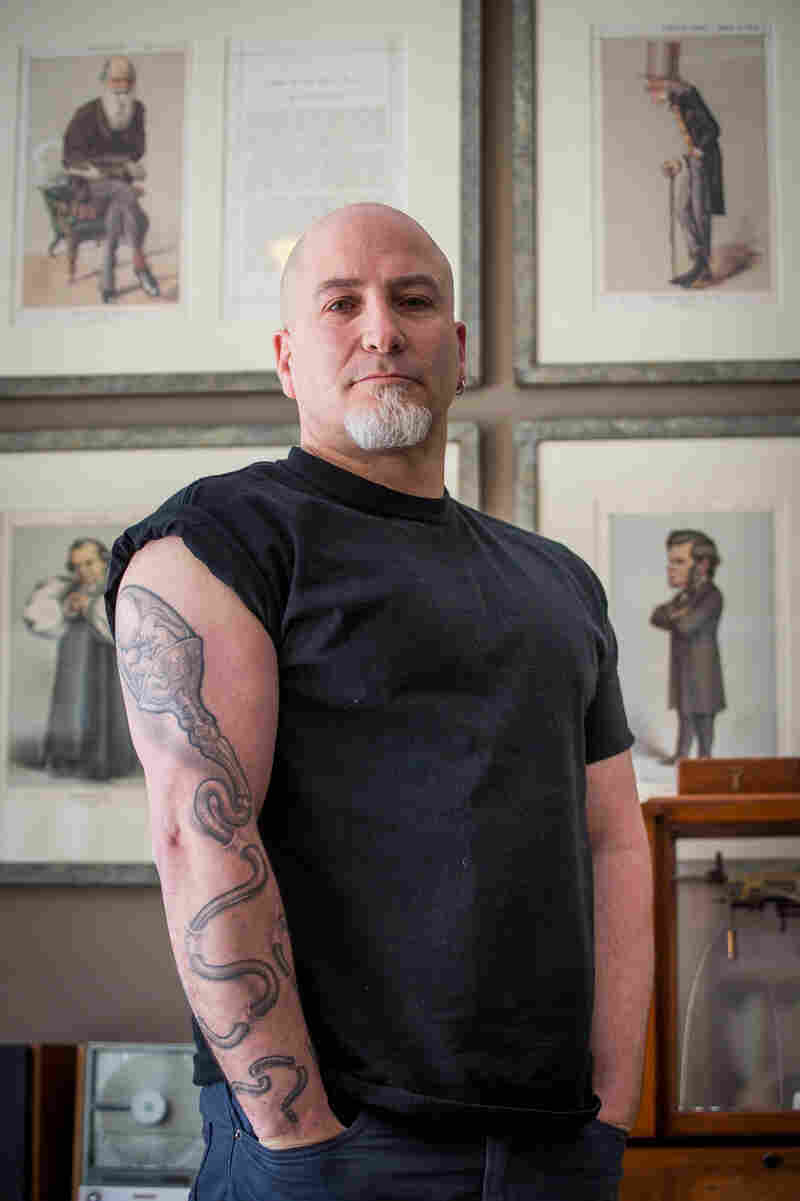 It's not unusual for males to try to impress females with big body parts. Consider antlers on deer, or elaborate tails on peacocks. Females check these out to decide who is good enough to mate with. "A crappy male in poor condition isn't able to afford to grow really huge antlers and carry them around on his head," Pitnick points out.

But the size of a fly's sperm isn't as obvious or flashy. Nonetheless, Pitnick and his colleagues have results from a study published Wednesday in the journal Nature comparing the evolution of long sperm in fruit flies, or Drosophila, with other male ornaments in the animal kingdom that are used to woo females — everything from deer antlers to stag beetle mandibles to lizard horns.

"Sperm length in Drosophila has been subject to incredibly strong sexual selection, more so than any other ornament that's ever been studied before," Pitnick says.

It turns out that as female flies flit around mating with different males, the females store the sperm inside a special organ before the eggs get fertilized, and the sperm jostle around in there.

"The advantage to having relatively long sperm is that they are better competitors for this limited storage space inside of the female reproductive tract," says Pitnick. Any increase in the size of the female's storage space seems to drive the evolution of longer sperm, and vice versa.

But that's not the only thing that's been working to make sperm longer and longer, he says.

"In the species with long sperm, males transfer very few sperm — a few to dozens of sperm per copulation," he says. "Females have to mate multiple times a day just to get an adequate supply of sperm."

Only the guys with the best genes can make enough long sperm to take advantage of all these mating opportunities. That's because making giant sperm isn't easy — it takes a lot out of the poor guys.

"As sperm get longer, the number of sperm males produce becomes more and more reliant on the health, the condition the male is in," says Pitnick.

That's a plus for females, who only want to make babies with the most hardy, manly flies.

"There's this whole world that we've barely scratched the surface of, of complex interactions between sperm and females," says Pitnick. "You have to understand that it's not just a simple game of numbers where males are competing through a lottery and the female reproductive tract doesn't matter. A lot of people, I think, still subscribe to the idea that females are passive vessels in which this competition plays out, and nothing can be further from the truth."

Biologist and sperm researcher Tim Karr, who is currently a visiting scholar at Kyoto Institute of Technology in Japan, says the new work is impressive and that these huge sperm have long been an enigma.

"The biology is so very different and there has been no good explanation or even attempt to explain it," says Karr. "I think it will spark an awful lot of conversation and hopefully additional research."

It's often the weird outliers that can reveal nature's secrets, says Karr, and this study shows how female choice and male competition can be linked together in surprisingly complex ways.