Accessibility links
A Transplanted Uterus Offers Hope, But Procedure Stirs Debate : Shots - Health News At least one U.S. hospital is attempting uterine transplants for women born without a uterus, or who've lost it to disease. The surgery has yielded births in other nations, but poses real risks, too. 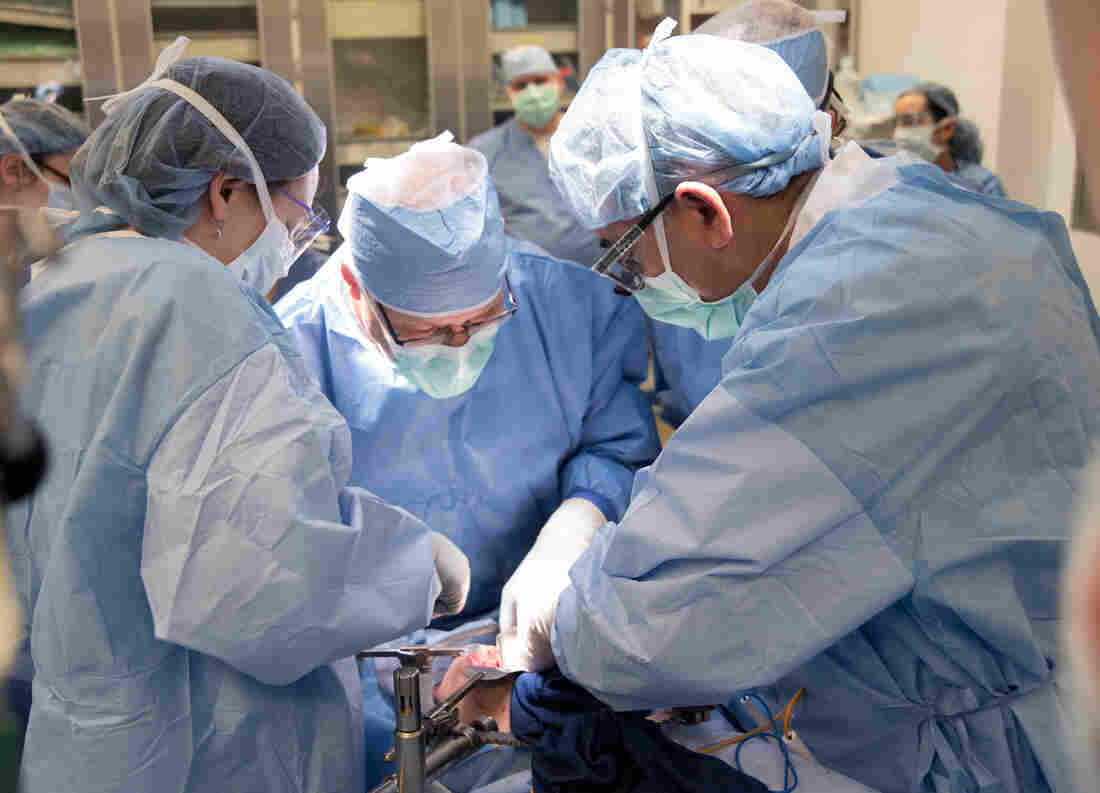 Cleveland Clinic surgeons in February transplanted a uterus from a deceased donor into 26-year-old Lindsey McFarland, who was born without one. Though the experimental surgery was initially thought successful, a raging infection forced removal of the organ within weeks. Cleveland Clinic hide caption 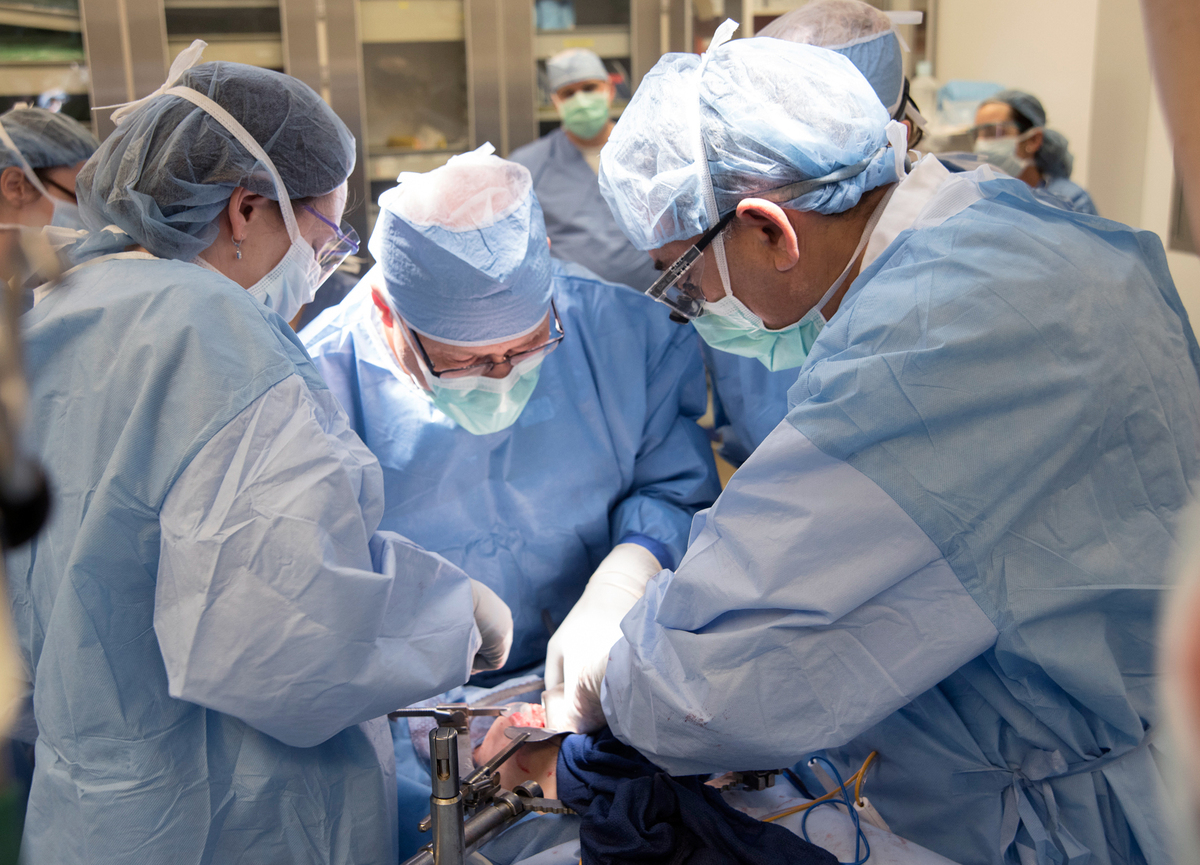 Cleveland Clinic surgeons in February transplanted a uterus from a deceased donor into 26-year-old Lindsey McFarland, who was born without one. Though the experimental surgery was initially thought successful, a raging infection forced removal of the organ within weeks.

Lindsey McFarland was born without a uterus. So she and her husband, Blake, created their family by adopting three boys. But they always dreamed that she could somehow become pregnant and give birth to a baby.

She longed to feel a baby kick and develop inside her. She wanted the thrill of discovering the sex of the fetus during a routine sonogram. She even wanted to go through morning sickness and labor.

"All of that," says the 26-year-old from Lubbock, Texas. "I wanted to experience all of that."

So, when the Cleveland Clinic announced plans to launch the first U.S. study to evaluate womb transplants for women who were born without a uterus or lost theirs to disease, the McFarlands decided Lindsey should volunteer. 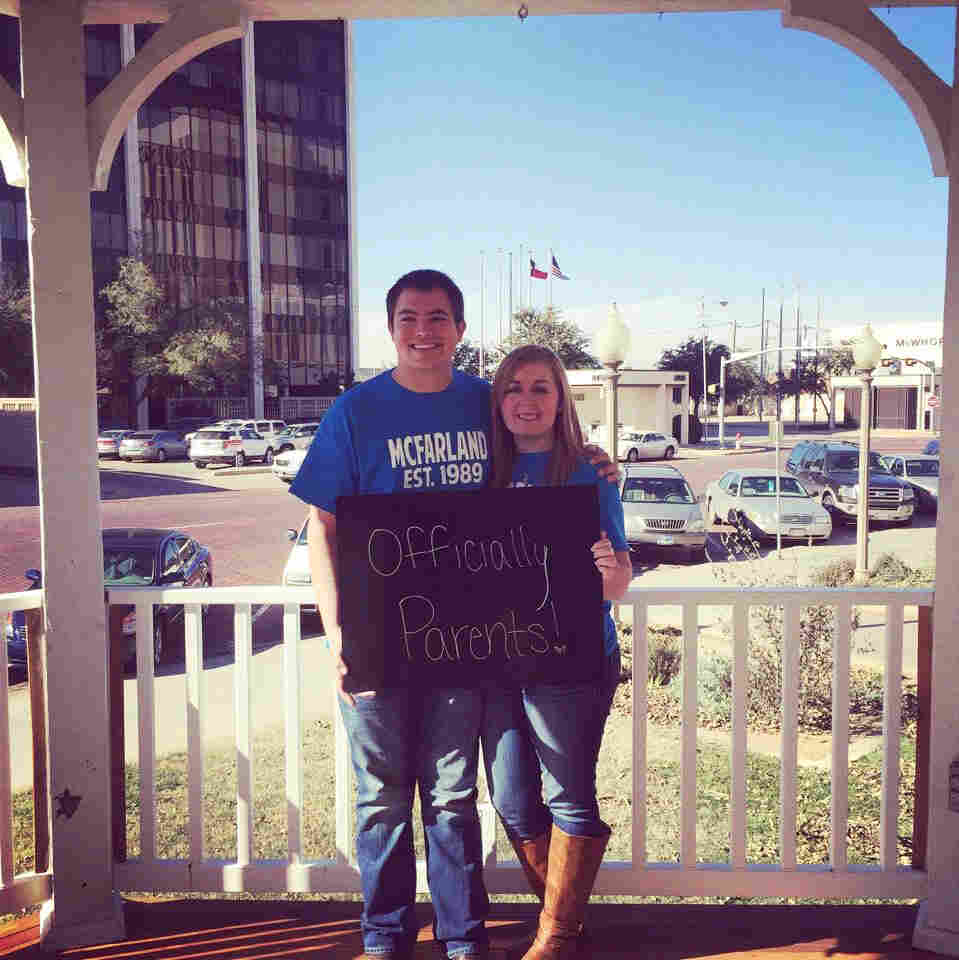 Blake and Lindsey McFarland have adopted three boys, but Lindsey was also eager to give birth. Though an infection that destroyed McFarland's transplanted uterus also nearly claimed one of her legs, she says she has no regrets about volunteering for the surgery. Courtesy of Blake McFarland hide caption 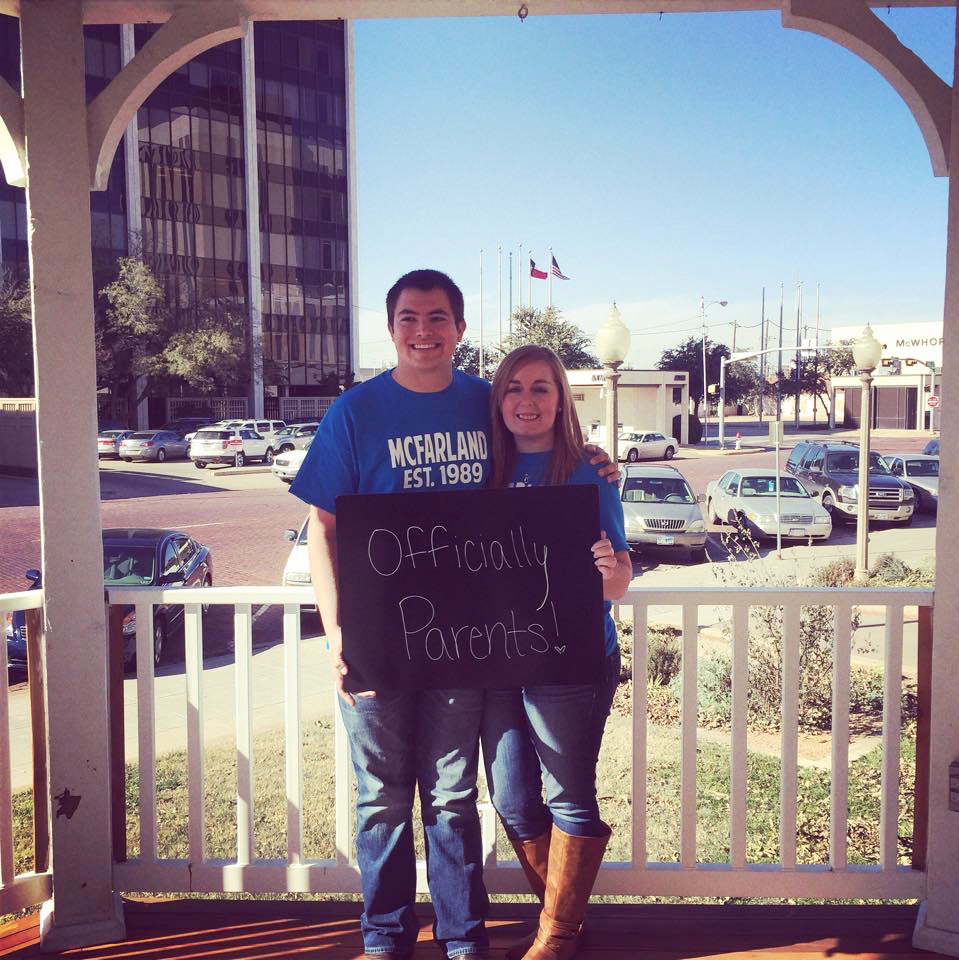 Blake and Lindsey McFarland have adopted three boys, but Lindsey was also eager to give birth. Though an infection that destroyed McFarland's transplanted uterus also nearly claimed one of her legs, she says she has no regrets about volunteering for the surgery.

She underwent a 10-hour operation in February to become the first — and so far only — woman to get a uterine transplant in the United States.

Everything went so well that McFarland and her doctors held a news conference about a week later to celebrate.

"We were very much thinking to the future," she says.

But hours after the news conference ended, Lindsey started bleeding. Doctors discovered she had developed a severe yeast infection that had destroyed the transplanted uterus.

Doctors rushed her into surgery to remove the uterus. Surgeons then had to perform a third major operation when the infection threatened one of her legs.

"We both just cried," McFarland says. "Some days are harder than others."

Despite that experience, doctors at the clinic remain optimistic. They plan to try the procedure at least nine more times.

"Obviously this is incredibly disappointing," says Dr. Rebecca Flyckt, an obstetrician-gynecologist at the clinic. "But we're very happy Lindsey came through safely. And I think our team can look at this as an example to learn from as we move forward."

Flyckt says the clinic now plans to give medication to all women undergoing the procedure to minimize their risk of developing yeast infections.

But the procedure remains highly controversial. Critics worry about the risks it poses to women who are desperate to have children.

"I don't think you can find people more vulnerable than those who wish to become parents and can't," says Michele Goodwin, director of the Center for Biotechnology and Global Health Policy at the University of California, Irvine.

In addition to possible complications from undergoing major surgery, women and any babies they carry face risks from powerful drugs the women must take to prevent their bodies from rejecting the transplanted uterus.

"There are many, many risks, and they concern me greatly," says Dr. Wendy Chavkin, an emeritus professor of public health and obstetrics and gynecology at Columbia University. She notes that, unlike the transplant of a liver or heart, a uterine transplant is not a life-saving procedure.

Others worry that the procedure perpetuates social stereotypes.

"It further reinforces this idea that to be a 'real woman' you need to have a genetically related child that you gestate yourself," says Lisa Campo-Engelstein, a bioethicist at Albany Medical College.

The critics note that women without a uterus have other options — such as adopting, or enlisting the help of a surrogate mother.

At least three other U.S. hospitals are also considering attempting uterine transplants. They are the Brigham and Women's Hospital in Boston, the Nebraska Medical Center in Omaha and the Baylor University Medical Center in Dallas. 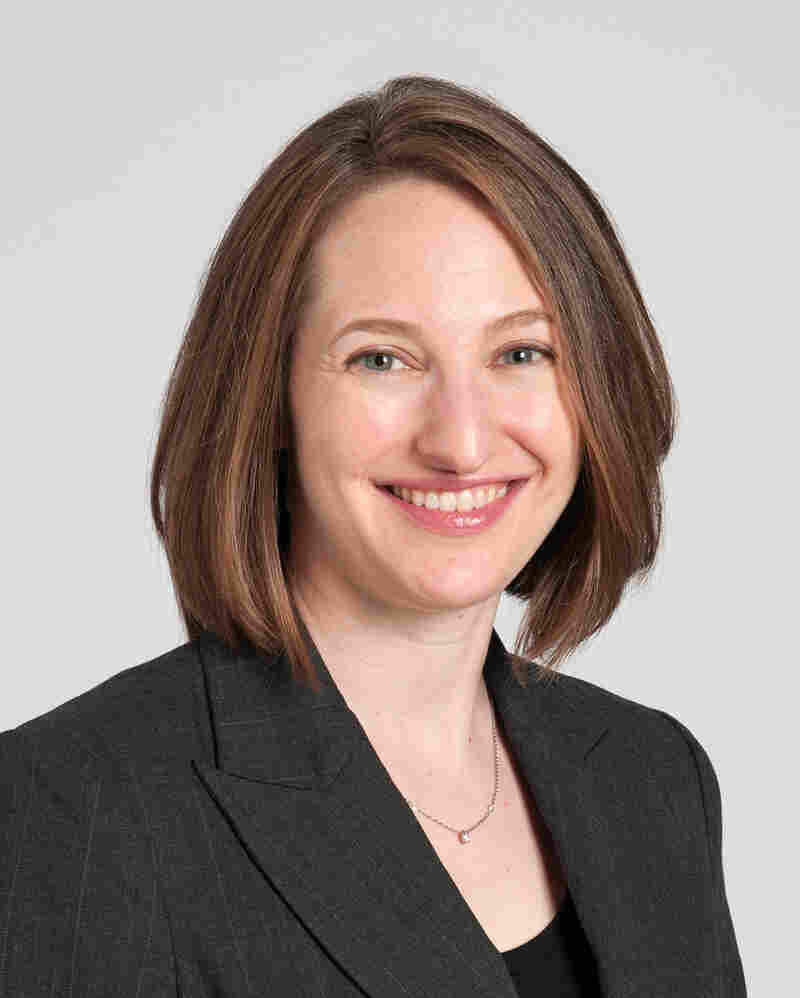 Dr. Rebecca Flyckt of the Cleveland Clinic was a member of the surgical team that gave McFarland a transplanted uterus. Having to remove the organ was "incredibly disappointing," Flyckt says, but she adds that the team learned valuable lessons. Cleveland Clinic hide caption

While the Cleveland Clinic is using wombs from deceased donors, doctors in Sweden who pioneered the procedure relied on living donors. The transplant team at Baylor says it, too, will get the organs from living donors (as well as deceased); critics say that raises questions about the risks to the donors, as well as to the recipients.

But the doctors conducting these studies defend what they're doing. The Cleveland Clinic only started its program after the doctors in Sweden showed the transplants can work and produce healthy babies, Flyckt says.

A successful transplant, of course, is only a first step; embryos that have been created beforehand through in vitro fertilization (IVF) must also be implanted in the uterus, and carried to term to produce a healthy baby.

Physicians at the University of Gothenburg in Sweden have performed at least nine uterine transplants, so far, resulting in at least five babies.

"I think there will be a small group of women who are interested in doing this procedure despite the fact that we know that there are some risks," Flyckt says. "And I think, with enough counseling, we can ensure they are making a pretty informed choice about this."

To try to minimize risks to the recipient, the transplanted uterus would only remain in her body until she has tried to have a baby once or twice. It would then be removed so she can stop taking anti-rejection drugs.

Lindsey McFarland says she has no regrets about attempting the procedure.

"For something that was so important to me, I went for it," she says. "I can say I tried. And I think that's so important."

She hopes what doctors learned from her experience will help the next woman who tries.

An earlier version of this post misspelled Dr. Rebecca Flyckt's name as Flykt.