Accessibility links
WATCH: Mosquitoes Use 6 Needles To Suck Your Blood : Shots - Health News Beyond pesky, mosquitoes kill hundreds of thousands of people worldwide each year. And the bites aren't random. A mouth packed with sensors, drills, spears and straws guides the bug to blood.

WATCH: Mosquitoes Use 6 Needles To Suck Your Blood

WATCH: Mosquitoes Use 6 Needles To Suck Your Blood

It's not just idle curiosity that's got scientists hunting down all the bloody details of a mosquito bite. Bites from these bugs are more dangerous to humans than those of any other animal; mosquitoes kill hundreds of thousands of people each year worldwide, and sicken millions more.

Male mosquitoes don't bite people, but when the females drink our blood to grow their eggs, they can leave behind viruses and parasites that cause diseases like West Nile, malaria, dengue and Zika.

Part of what makes mosquitoes so good at getting humans sick, researchers are now learning, is the effectiveness of that bite. The mosquito's mouth, also called a proboscis, isn't just one tiny spear. It's a sophisticated system of six thin, needlelike mouthparts that scientists call stylets, each of which pierces the skin, finds blood vessels and makes it easy for mosquitoes to suck blood.

And these bugs know just where to bite. Mosquitoes have more than 150 receptors — proteins on their antennae and proboscis that help them find victims or figure out if a particular puddle of water has enough nutrients to support mosquito larvae.

Unfortunately, we humans leave an alluring trail. When malaria-causing Anopheles mosquitoes, for example, come out at night to look for blood, they track the carbon dioxide we exhale as we sleep, explains Shirley Luckhart, a University of California, Davis, parasitologist and entomologist. As they get closer to us, they detect body heat and substances called volatile fatty acids that waft up from our skin, she says.

Why are some people more likely to get bitten than others? Nobody knows for sure.

"The volatile fatty acids given off by our skin are quite different [from one person to the next]," Luckhart explains. "They reflect differences between men and women, even what we've eaten. Those cues are different from person to person. There's probably not one or two. It's the blend that's more or less attractive," she says.

When the female mosquito pierces the skin, a flexible liplike sheath scrolls up and stays outside as the insect pushes in the six needlelike parts.

Two of these needles, called maxillae, have tiny teeth that let the mosquito saw through human skin.

Note the sawing motion as an Anopheles mosquito bites a human arm.

Another set of needles, the mandibles, hold tissues apart while the mosquito saws into the skin. Then a fifth needle, called the labrum, pierces a blood vessel.

"Mosquitoes don't find the blood vessel randomly," says Leal. Instead, scientists have recently discovered that receptors on the tip of the labrum respond to chemicals in our blood that drift up through the tissue like a "bouquet of smells" to help guide the way to a likely vessel.

Once the labrum gets into the blood vessel, it also serves as a straw.

Young-Moo Choo, a postdoctoral researcher in Leal's lab, discovered one of the labrum's blood-detecting receptors — 4EP — by painstakingly dissecting the mouthparts and genetically testing each part. He says he hopes his work might one day help drug companies develop new repellents.

Scientists have been trying to figure out the anatomy of the mosquito bite for decades, but the insect's delicate mouthparts tend to fall apart in the hands of beginners. Keen dissection skills — aided by video, powerful microscopes and genetic analyses — are now enabling Choo and other scientists to gather the details they need to figure out how the feeding system works.

As a female mosquito's gut fills up with blood, she filters the nutritious red blood cells from the fluid and excretes the water.

"The red blood cells provide a large protein component," Luckhart says. Eliminating the water lets her take in five to 10 times more blood than she otherwise could.

The mosquito's sixth needle — called the hypopharynx — drips mosquito saliva from the bug into us. That saliva contains substances that keep our blood flowing.

A female mosquito's body concentrates red blood cells and gets rid of fluid she doesn't need — the better to drink even more of your blood, my dear.

Otherwise, "your blood tends to coagulate immediately upon contact with the air," Leal explains.

Mosquito saliva is powerful stuff. It makes our blood vessels dilate, blocks our immune response and lubricates the insect's proboscis. It causes us to develop itchy welts and can serve as a conduit for dangerous viruses and parasites.

"Infected mosquitoes spit highly variable doses, anywhere from one infectious virion to 10,000," says UC Davis virologist Lark Coffey, referring to virus particles. "The number of virions needed to productively infect mice can be as low as one. In theory, one might be enough to cause diseases like dengue or West Nile."

And it takes only eight to 20 early-stage malaria organisms to cause that disease.

"Within 20 minutes they make it to the human liver," says Luckhart. "It's a very fast process."

Scientists also believe bites from Aedes aegypti mosquitoes have been the main transmitters of Zika virus to people in the recent epidemic.

Mosquitoes don't get anything out of making us sick — they just incidentally pass these viruses and other organisms on to us. In fact, researchers have found that some viruses started out as mosquito-only viruses. This isn't hard to believe; the first organisms that resembled mosquitoes are thought to have developed about 200 million years before the first humans. 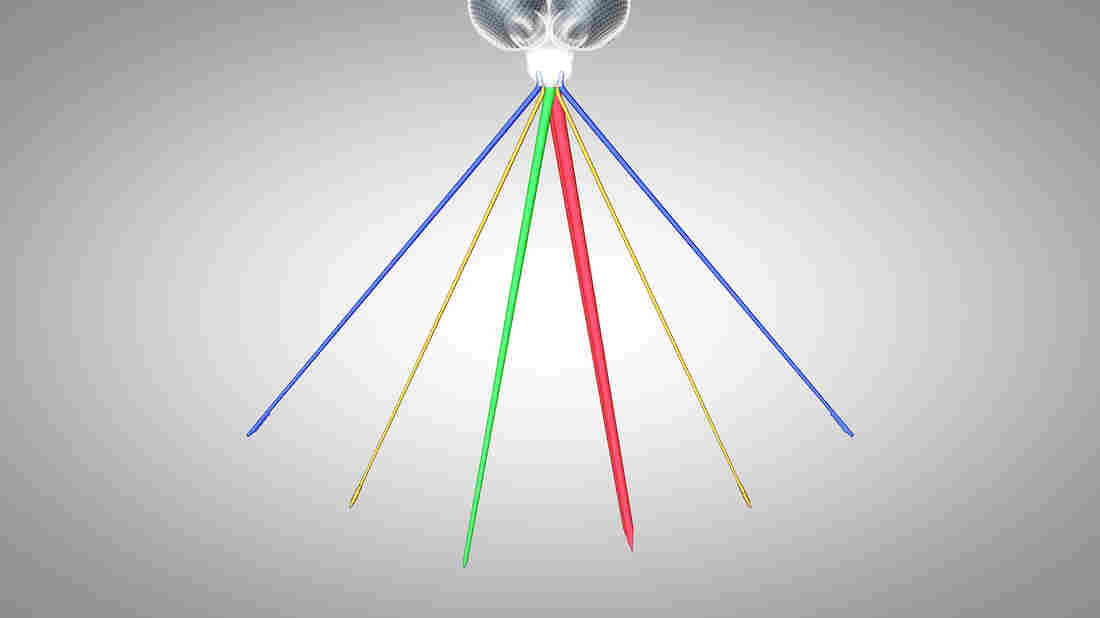 This illustration shows the six needlelike mouthparts that female mosquitoes use to bite people. Usually sheathed by a flexible tube, the weapons include two maxillae (blue) to saw into the skin and two mandibles (yellow) to hold the tissues apart as the maxillae saw. The bugs drool saliva into humans with the hypopharynx (green) and suck up blood with the labrum (red). Teodros Hailye/KQED, based on research by Young-Moo Choo and colleagues hide caption

toggle caption
Teodros Hailye/KQED, based on research by Young-Moo Choo and colleagues 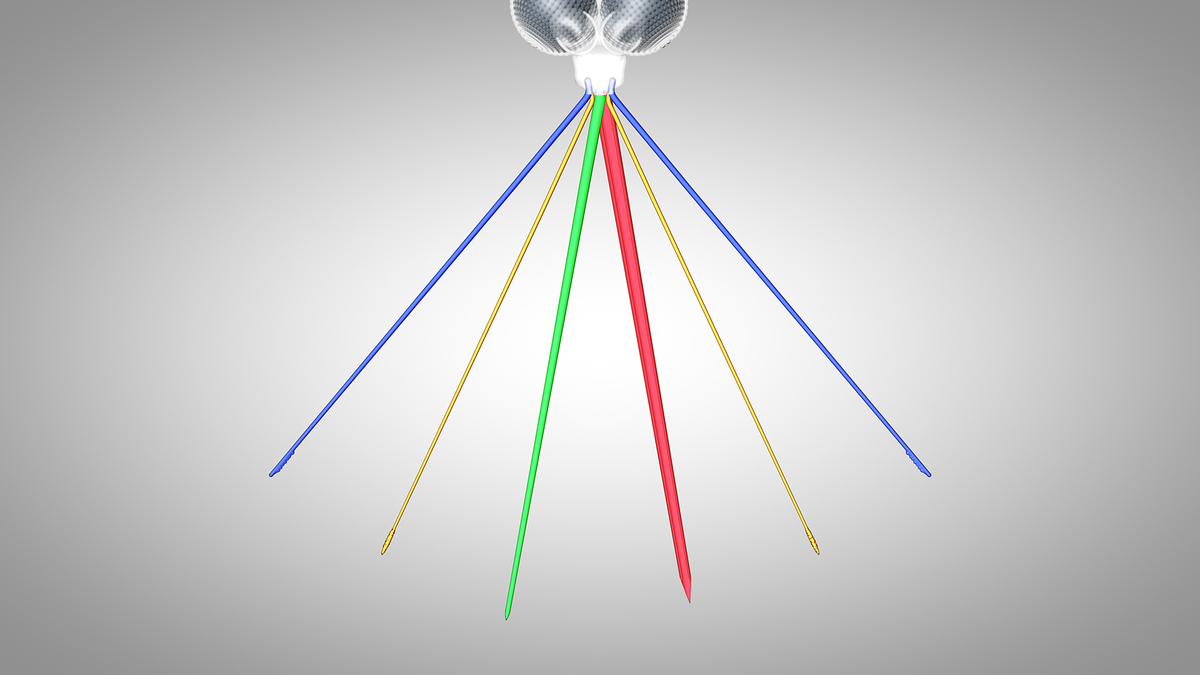 This illustration shows the six needlelike mouthparts that female mosquitoes use to bite people. Usually sheathed by a flexible tube, the weapons include two maxillae (blue) to saw into the skin and two mandibles (yellow) to hold the tissues apart as the maxillae saw. The bugs drool saliva into humans with the hypopharynx (green) and suck up blood with the labrum (red).

Teodros Hailye/KQED, based on research by Young-Moo Choo and colleagues

"As mosquitoes evolved the habit of drinking blood, some viruses have tracked that evolutionary path and become human-vectored viruses," says microbiologist Shannon Bennett, chief of science at the California Academy of Sciences, in San Francisco.

To reduce the chances of contracting a mosquito-borne disease, public health experts recommend wearing mosquito repellent, checking the screens on doors and windows and eliminating standing water inside and around our homes. Mosquitoes lay their eggs in water — even in the small amounts that pool in gutters and bits of trash, as well as in decorative ponds, flower vases, pet dishes and uncovered rain barrels.

"We've created the ecological niche that they're well-adapted to," says Bennett.

This post and video were produced by our friends at Deep Look, a wildlife video series from KQED and PBS Digital Studios that explores "the unseen at the very edge of our visible world." KQED's Gabriela Quirós is the coordinating producer of the series. You can read a longer version of her post on the Deep Look website.