Accessibility links
Penicillin Still Packs A Punch For Syphilis : Shots - Health News Syphilis cases are on the rise. The bacterium that causes the sexually transmitted disease is becoming resistant to some antibiotics. But somehow, penicillin has remained the best weapon against it.

Despite Rise Of Superbugs, Syphilis Still Has A Kryptonite

Despite Rise Of Superbugs, Syphilis Still Has A Kryptonite 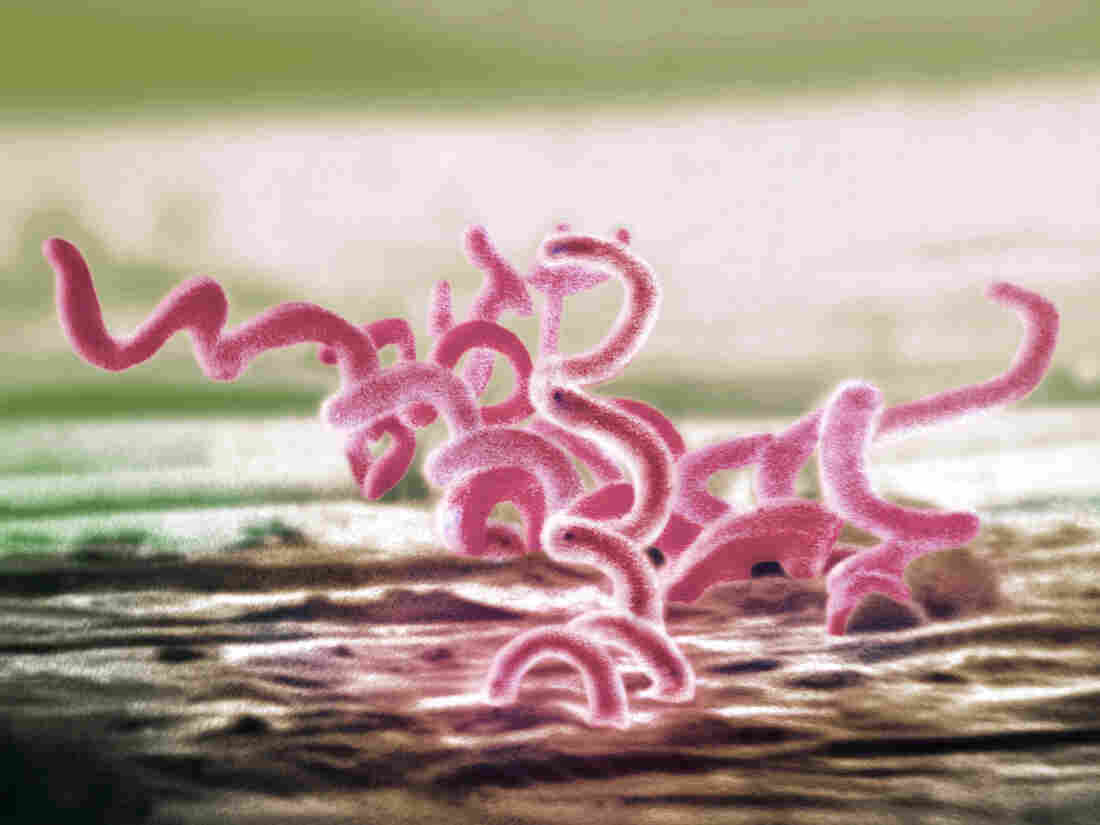 Treponema pallidum, the bacterium that causes syphilis, looks like a writhing snake under a microscope. Science Source hide caption 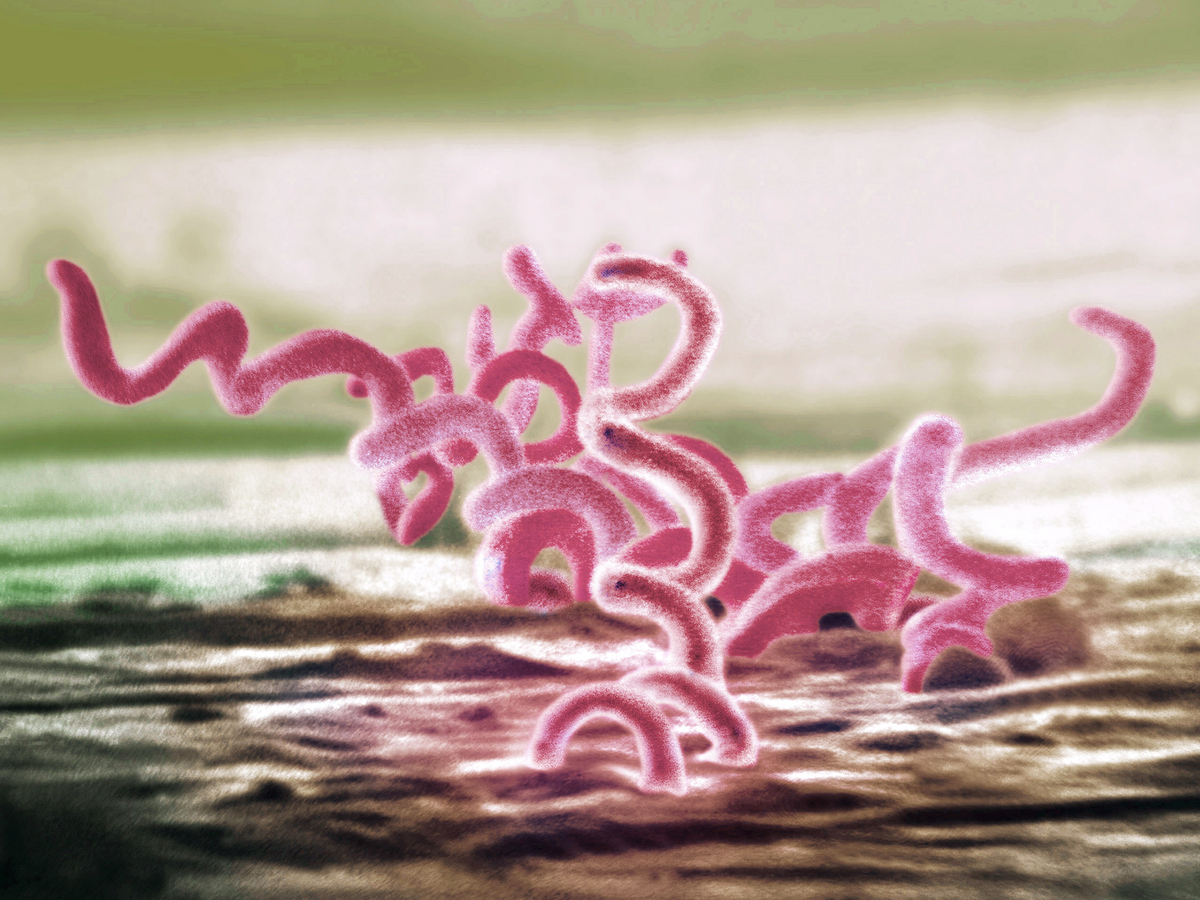 Treponema pallidum, the bacterium that causes syphilis, looks like a writhing snake under a microscope.

Lola Stamm fell in love with the bacterium that causes syphilis when she was in grad school.

Other bacteria are rod-shaped or blobby. Treponema pallidum, the syphilis culprit, is a long, skinny corkscrew — and it slithers.

"Under the dark-field microscope they look like little snakes," says Lola Stamm, a microbiologist at the University of North Carolina, Chapel Hill. "It's really rather creepy, but they're just fascinating organisms."

The bacterium is bizarre for another reason – penicillin still obliterates it.

Shortly after penicillin's discovery about 70 years ago, the wonder drug could treat a wide range of bacteria that caused infections, from war wounds to pneumonia.

"Before too long, they developed resistance," Stamm says. Within a decade, many bacteria had developed the ability to evade the antibiotic. (Now, so-called superbugs are an increasingly worrisome public health problem because they're nearly invincible.)

But somehow, through all the decades, penicillin has remained the kryptonite for syphilis. Just one to three shots of the drug and a person is cured. 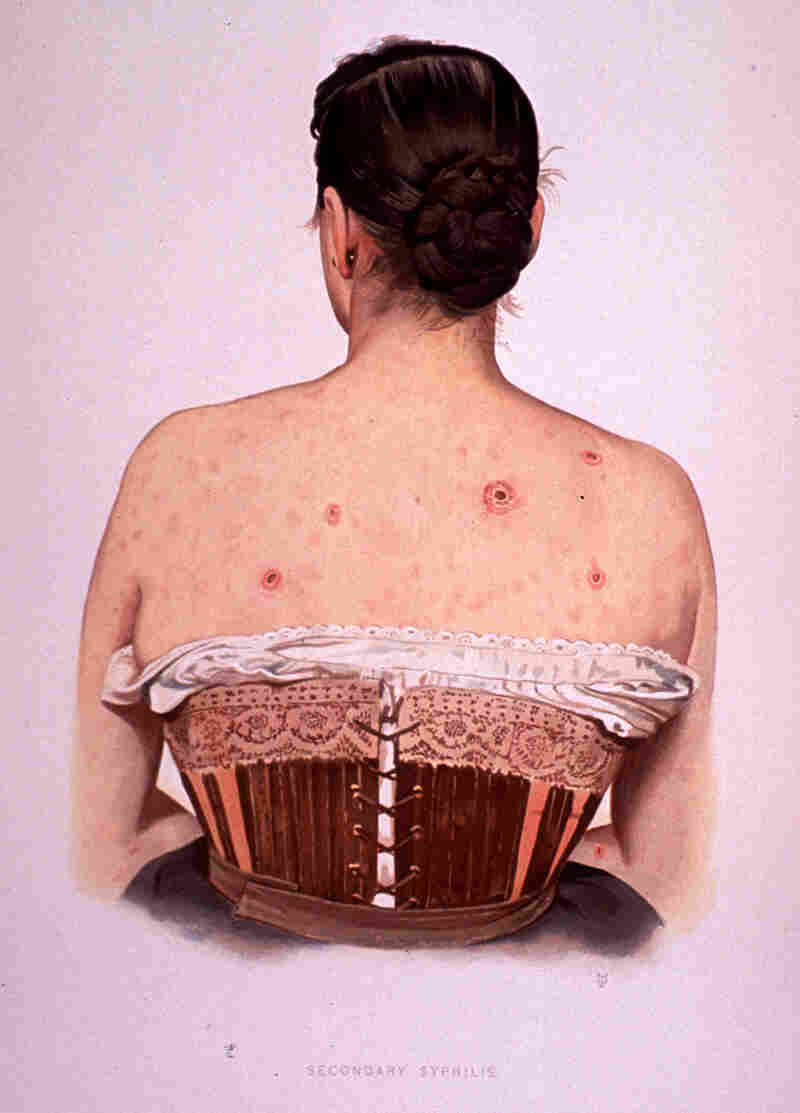 An 1893 illustration of secondary syphilis in the Atlas of Clinical Medicine. U.S. National Library of Medicine hide caption 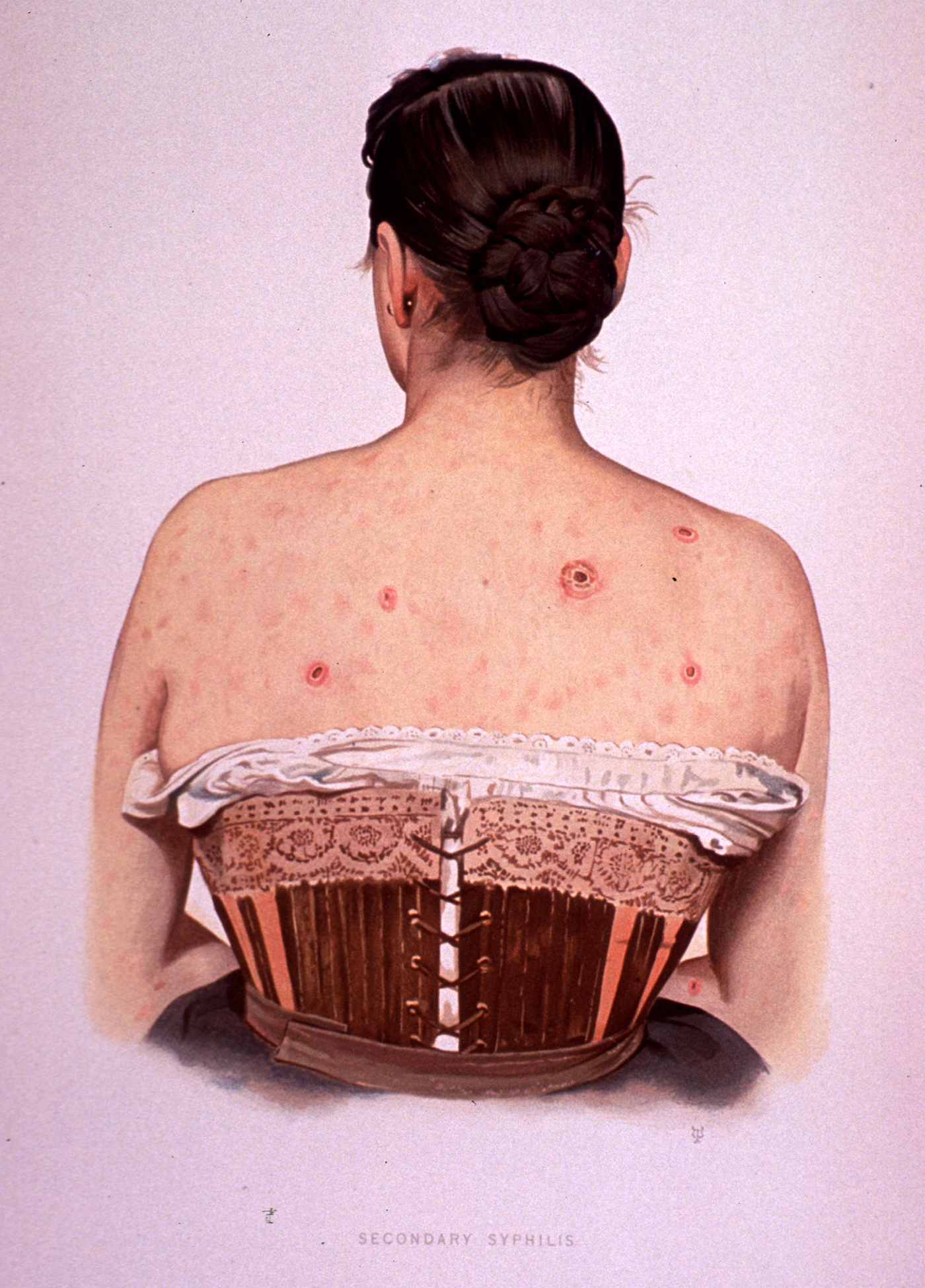 An 1893 illustration of secondary syphilis in the Atlas of Clinical Medicine.

As Stamm points out, we are extremely lucky that penicillin still works so well, because human victories against bacteria tend to be short-lived, and because syphilis is a terrible disease.

It used to land people in mental hospitals with hallucinations, dementia and brain damage. Untreated, it puts a person at a higher risk of getting HIV. And an infected pregnant woman can pass the disease to the fetus through the placenta, often causing debilitating birth defects.

In many countries including the U.S., cases are on the rise. The U.S. Preventive Services Task Force published a recommendation Tuesday that high-risk patients, including men who have sex with men, be screened for the infection, even if they don't have any symptoms.

Why has T. pallidum remained so helpless against penicillin while other bacteria develop resistance with ease?

"The short answer is that we don't know," says Steve Norris, a microbiologist with McGovern Medical School at University of Texas Health Science Center at Houston.

But scientists like Norris and Stamm have some educated guesses. It could be because the bacterium just isn't capable of importing genes the way others are.

"Bacteria are promiscuous, you know. They can take genetic material and move it around, and they do," says Stamm. So, instead of waiting around to accumulate the right combination of mutations over generations, they can just import genes from other organisms, sometimes even from organisms in another genus.

Most bacteria have plasmids, rings of DNA, that can help package and send antibiotic-resistance genes from one germ to another, like a bacterial FedEx. But T. pallidum doesn't. There's no evidence of viral transfer of resistance genes, another mechanism, either. 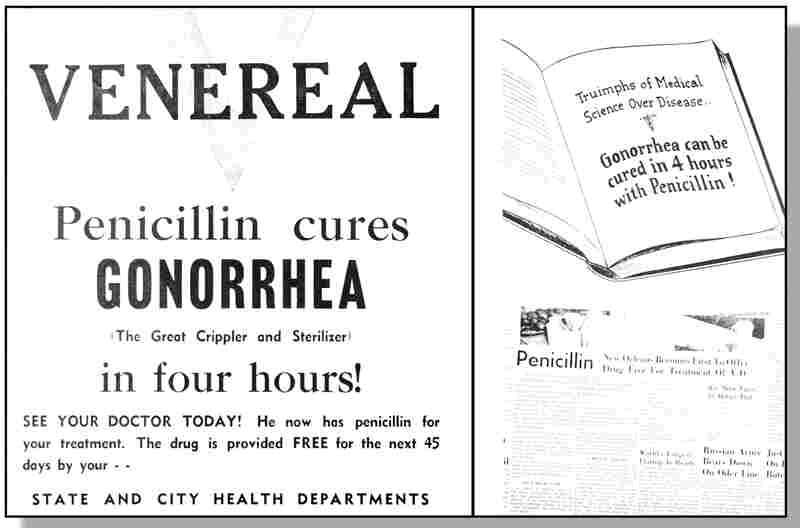 Penicillin was considered a "triumph of medical science over disease," but it no longer works against gonorrhea. U.S. National Library of Medicine hide caption

"They don't have U.S. mail, FedEx, or UPS," says Norris. If they did, then peering into the genome one might find snippets of genetic material that belonged to something else, wedged in with T. pallidum's. "T. pallidum doesn't have any plasmids, and it doesn't have signs of any viruses. That's very unusual for any type of bacteria."

Plus, he says, "In the world of bacteria, T. pallidum is a loner." It bores down under the skin and stays there, whereas other bacteria would tend to congregate on the surface of the skin and in crowded places like the intestines or mucous membranes. So even if it could pick up genetic packages, T. pallidum doesn't have many opportunities to rub up against other organisms and do so.

And because the organism is also extremely fragile, penicillin tends to wipe them all out, leaving no survivors to pass along possibly advantageous mutations.

"So, it's kind of just sitting there," says Stamm. "It can do some mutation in its DNA, but hopefully it's not going to do enough mutation that will allow it to become resistant to penicillin."

But it did manage to become resistant to other antibiotics. In 2000, Stamm figured out why a course of erythromycin failed to rid a U.S. patient of syphilis. It was remarkably and scarily simple.

The other day she came across the original results from that experiment. "It still gives me chills every time I see it," she says.

The results showed that T. pallidum had just one tiny change in its DNA. That was all it took to become invincible against the antibiotic.

"That is a beautiful, just simplistic mechanism of resistance," she says. "It's beautiful to me; it's ugly for the human population."

The class of antibiotics, called macrolides, had been so promising. It made people think syphilis could be done away with. The pills held a lot of promise for eradicating the disease because they were a lot easier to administer than shots of penicillin in the buttocks.

"I mean, you could take a 2-gram dose and be cured of your syphilis. Wonderful!" says Stamm. No need for an intramuscular shot, no need to worry about accessing clean needles for patients in developing countries.

"But then resistance developed. And it really seems to have spread," she says. T. pallidum strains now resistant to multiple macrolide drugs have led to syphilis cases in China, the U.S., Australia, the U.K., and most recently Cuba.

"Syphilis has not gone away, and it's not going away anytime soon," says Stamm. She expects the bacterium to become resistant to doxycycline at some point, too.

But at least for now, we can count on penicillin.