Accessibility links
The Gray Team Zeroed In On Subtle Effects Of IED Blasts : Shots - Health News A group of specialists called the Gray Team challenged the dogma that said head injuries were serious only if they were obvious and bloody. Bomb blasts can lead to lasting but invisible damage. 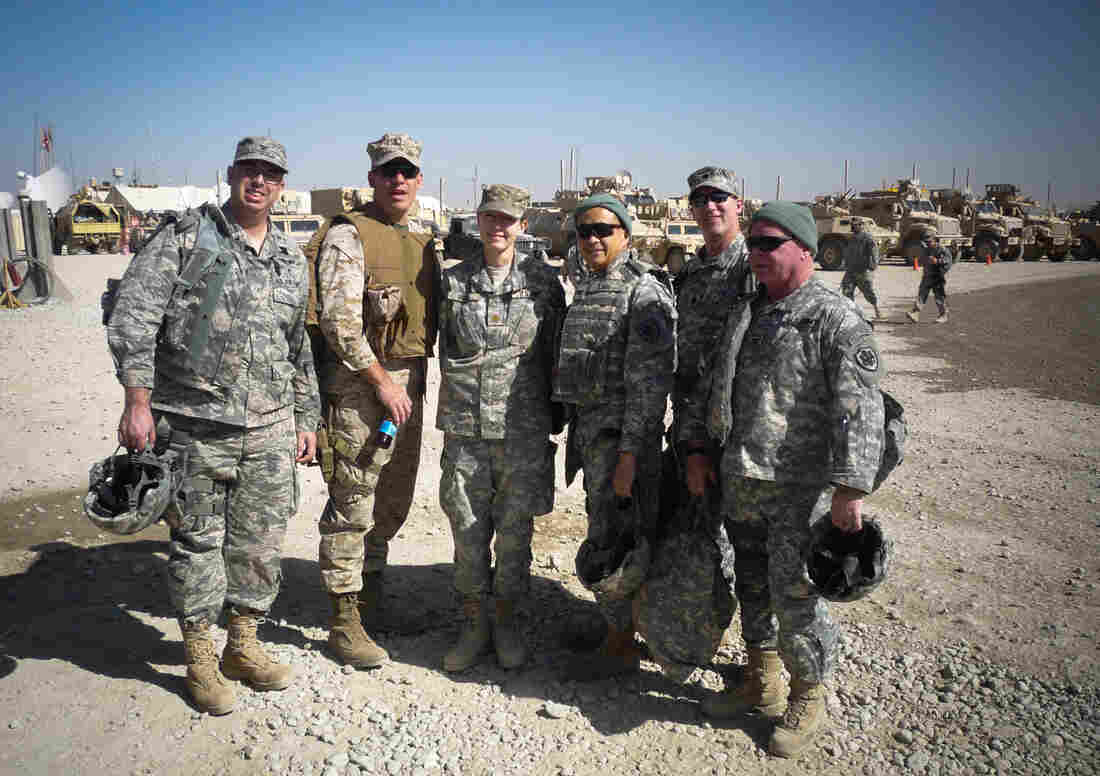 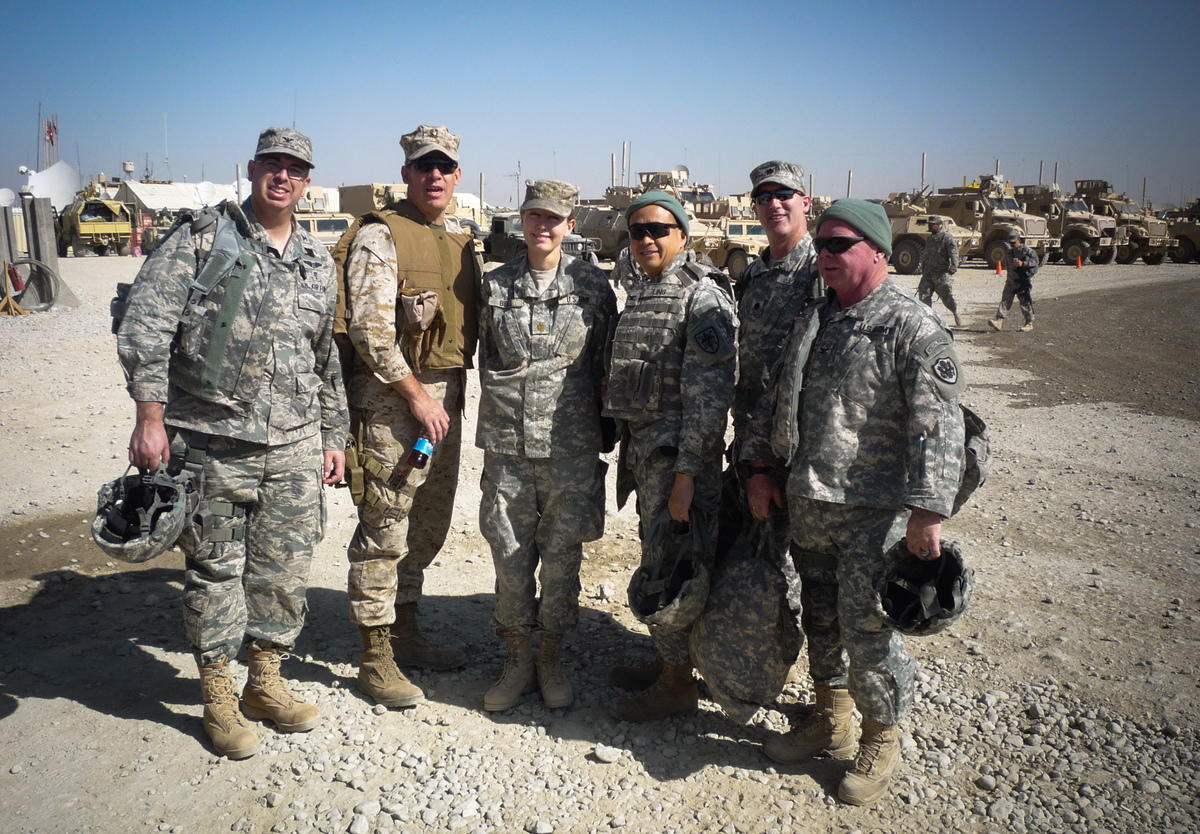 During the wars in Iraq and Afghanistan, the U.S. military did an about-face on detecting and treating brain injuries caused by explosions. After years of routinely sending blast-exposed troops back into combat, the military implemented a system that requires screening and treatment for traumatic brain injury.

The change came about in large part because of a remarkable campaign by an elite team of military officers who were also doctors and scientists. They worked for the highest-ranking officer in the armed forces. And they were known simply as the Gray Team.

The Gray Team began with a contentious job interview between the doctor who would lead the team and the man who would be his boss.

It was 2008 and Army surgeon Christian Macedonia had been told there was a high-level opening for a doctor who wanted to change the military's approach to battlefield brain injuries. When Macedonia arrived for the interview, he found himself face to face with Adm. Michael Mullen, chairman of the Joint Chiefs of Staff.

"And he looks at me and he goes, 'Who are you and what are you doing in my office?' " Macedonia says.

Macedonia explained he was there about the job. Mullen replied that he had decided he didn't need a doctor on his staff. "And I said, 'Sir, I'm going to disagree with you,' " Macedonia recalls.

Macedonia, a lieutenant colonel, told the admiral that if he really wanted to do something about brain injuries, he did need a doctor. What's more, he needed one with combat experience, strong scientific credentials and a high-level security clearance. "I said, 'Sir, you really only have one person and that's me.' "

Mullen smiled. He had been looking for someone he might have to rein in, but would never have to push. "And Macedonia fit that model for me perfectly," he says. "He's very outspoken, very straightforward. We talk about out-of-the-box thinkers; he just lives outside the box."

Macedonia's first assignment was to put together a team. He recruited four other military doctors with combat experience and impressive resumes.

They were called the Gray Team, after the brain's gray matter, the gray issues surrounding traumatic brain injuries and the graying team members themselves.

Their mission was to challenge something military doctors had been taught about blast exposure since World War I: 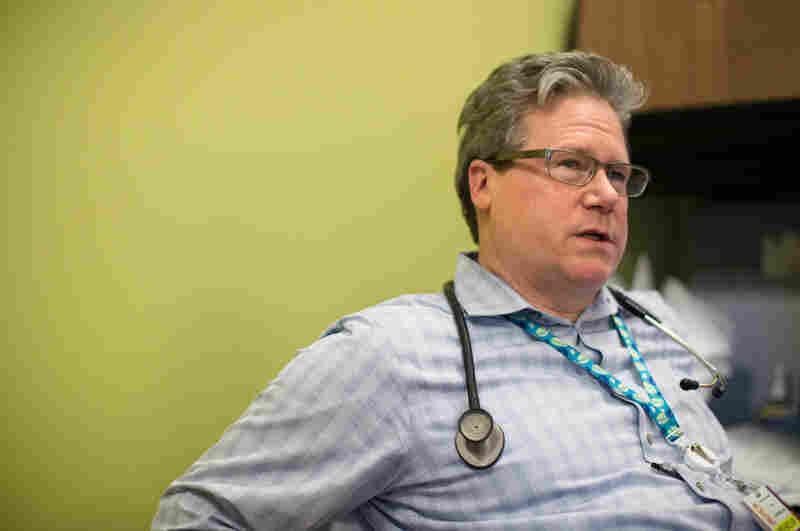 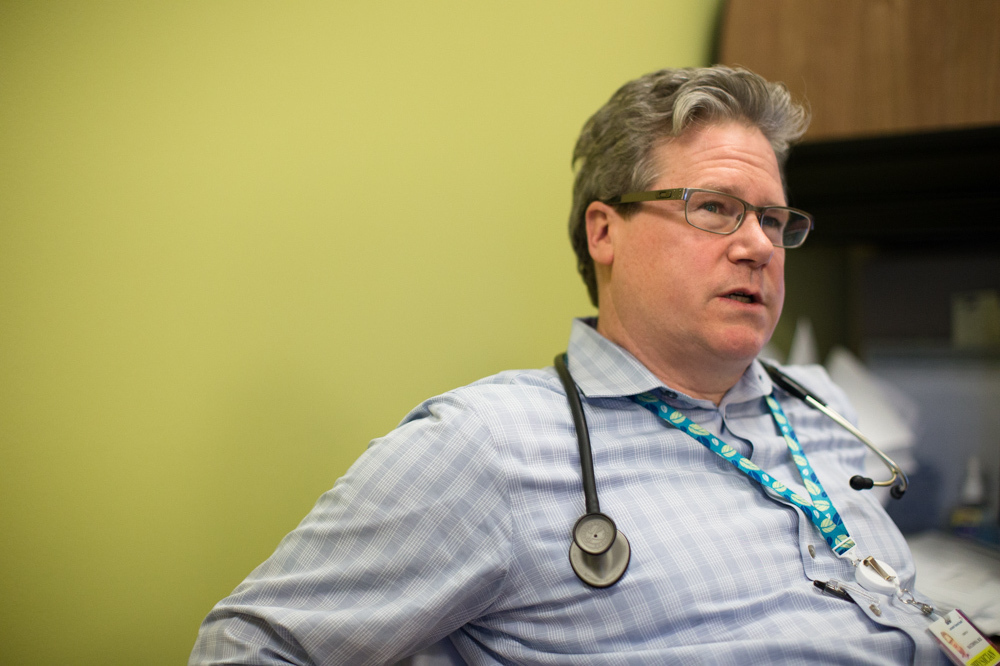 "If you don't have blood coming out of your head, if you don't have a penetrating injury, you have not been injured," Macedonia says. "Your job as a doctor at that point is to say, 'You're gonna be fine' and basically minimize any of the symptoms."

Macedonia himself believed that when he was deployed to Iraq in 2004, to serve as chief of a combat support hospital near Fallujah. He was seeing horrendous injuries, so he didn't have much time for people who looked OK, even if they'd been dangerously close to a blast.

Macedonia and other military doctors actually became suspicious of service members who suggested blast exposure was the cause of their headaches, fatigue or sleep problems. "The attitude was that these people were trying to get a Purple Heart or something like that," he says. "In retrospect, it was just awful. It was really a bad thing to do to people."

Macedonia's conversion occurred one day in Iraq, when he got caught in a mortar attack.

"I was out with a young Marine. We were in the middle of the attack. And the mortar was probably about 50 meters away," he says.

The blast wave shook them violently. But they were alive. And they weren't bleeding. So Macedonia went back to the hospital. He did surgery until midnight. Then, he headed for bed.

"I had a shaving mirror hung up by my cot and I looked in that mirror and I didn't recognize the person looking back at me," he says. Macedonia realized that he couldn't remember anything from the operating room that night.

And he recognized the vacant expression he saw in the mirror: "The same sort of strange look in the eye that I had seen in people who had been in IED blasts up and down the route near our base."

Macedonia was pretty sure he wasn't having a purely psychological reaction to combat. The blast had injured his brain.

In early 2009, Mullen's Gray Team headed for Iraq and Afghanistan. By this time, IEDs had become the weapon of choice for insurgents attacking coalition forces. Tens of thousands of soldiers were being exposed to bomb blasts. And many were experiencing memory loss, confusion and sleep problems.

But the military still wasn't taking the problem seriously. "We would tolerate multiple blasts [in] deployment after deployment," Mullen says. "And I was determined to see if I could do something about this."

So he sent the Gray Team to the battlefield to have a close-up look at what was happening to troops exposed to bomb blasts. "Quite simply, the Gray Team was there to establish ground truth with respect to traumatic brain injury," Macedonia says.

And the truth was pretty grim. Often, troops weren't even being checked for TBIs.

The military relies on something called the MACE exam — Military Acute Concussion Evaluation — to assess service members who have sustained a TBI or concussion. And Macedonia had been told the MACE exam was being administered to pretty much every service member near an explosion.

How A Blast Wave Affects The Brain

"But then you would go out and you would talk to these young medics and corpsmen — who are great patriots and doing wonderful things — and you would say, 'Hey, son, how often do you administer the MACE exam?' And they would look at you and say, 'Sir, I'm sorry, what's a MACE exam?' "

Because the military wasn't doing much to look for TBIs, it was usually up to individual service members to report their own brain injuries.

"If you were in a blast, you basically had one of two choices," Mullen says. "You either didn't admit you had a problem, or if you admitted a problem we put you on a plane, sent you home."

And Mullen knew from visiting hundreds of wounded troops that they didn't want to get sent home. "The first thing they tell you is they want to get back in the fight," he says. "So nobody would admit they had a problem."

When the Gray Team got back to the U.S., they began suggesting reforms. Their ideas got a hostile reception in the Pentagon.

"I would literally have people behind closed doors say, 'Who gave those people medical degrees?' " Macedonia says. It was a surprising allegation, considering the team members included people like Geoffrey Ling, an M.D.-Ph.D. considered the military's leading expert on traumatic brain injury.

But many senior medical officers just couldn't accept that there were real brain injuries you couldn't see on MRI or CT scans, Macedonia says. "The organized military medical system was still trying to hold back the ocean and say: No big deal, most of these injuries are psychiatric and our job is basically to provide counseling centers and get these people over the shock of being at war."

In the Pentagon, some medical officers feared that TBIs could become the next Gulf War syndrome — a poorly defined problem with no obvious cause and no good treatment.

Others had visions of the military medical system stateside being overwhelmed by newly diagnosed TBI patients. And more than a few just didn't like having someone outside their chain of command telling them what do.

Macedonia says bureaucratic concerns often seemed to trump the growing scientific evidence that blast-induced TBIs were real. "I can't tell you the number of times I walked out of rooms just being sorely disappointed at people who knew what the right thing to do was but chose to look the other way," he says.

But Macedonia was equal parts tenacious and ferocious. "He was a dog on a bone," Mullen says.

"Christian Macedonia doesn't give a f*** what anybody thinks if he believes he's on the right course," says Kit Parker, a Harvard professor and Army lieutenant colonel who served on the Gray Team in 2011.

MRIs On The Battlefield

The conflict between the Gray Team and the military medical establishment reached a peak over the issue of MRI scanners.

Conventional scanners usually couldn't detect the damage from a blast. But the Gray Team now included David Brody, a civilian scientist from Washington University in St. Louis, who was using a new MRI technique to study troops at the U.S. military hospital in Landstuhl, Germany.

"We went out there to Landstuhl, started enrolling patients, and started discovering immediately all sorts of injuries that were completely invisible to the conventional scans," Brody says.

Even though the Department of Defense was paying for Brody's research, the military medical establishment wasn't embracing the results. "There was a strong current in the military at that time that this was a problem that was going to go away if we ignored it," he says.

Macedonia wanted to deploy the new technology to hospitals near the battlefield. So during a Gray Team trip to Iraq, he made a pitch to a group of senior medical staff.

"I said, 'We're very seriously considering putting MRI machines in theater, what say you?' " he recalls. The reaction was as if he had proposed "bringing in a pile of radioactive waste to drop in your hospital."

Macedonia eventually got his MRIs, largely because his boss, Mullen, had clout. As chairman of the Joint Chiefs, Mullen was the highest-ranking officer in the armed forces. "But even the chairman can be ignored," Mullen says.

To make sure that didn't happen, Mullen, Macedonia and the Gray Team had been building a coalition that included Gen. Peter Chiarelli, the Army's vice chief of staff, and Gen. James Amos, assistant commandant of the Marine Corps. The Gray Team's allies simply outranked its opponents.

The team's decisive victory came in 2010, when the Department of Defense issued a memo that transformed the system for managing battlefield brain injury. "I can still remember Macedonia coming into my office saying, 'Chairman, we got it,' " Mullen says. 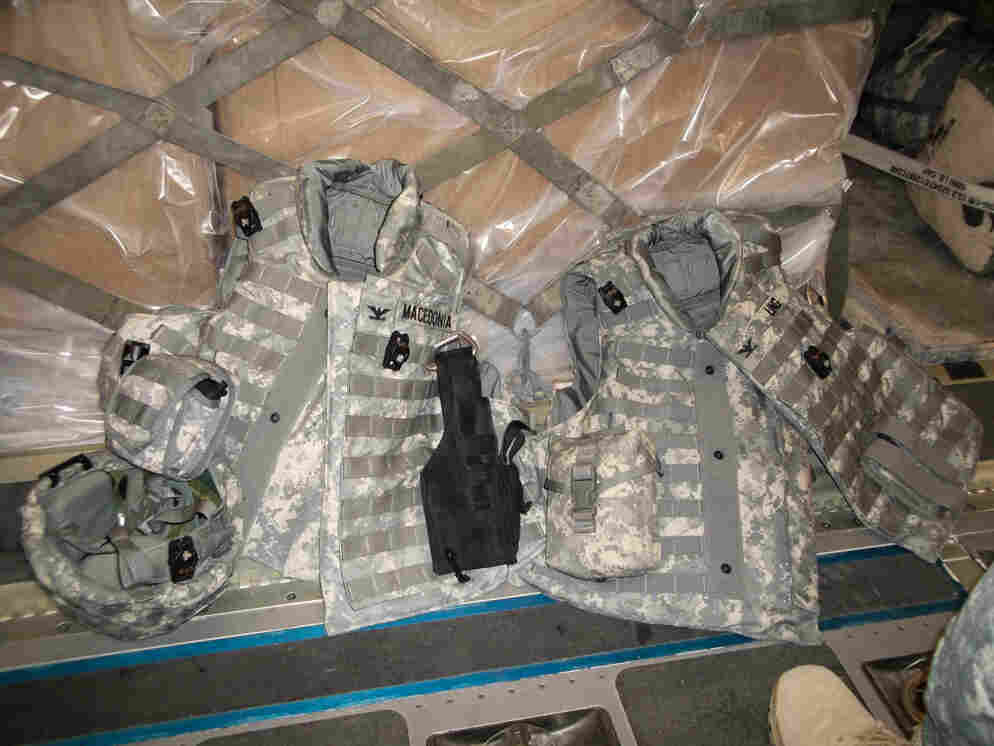 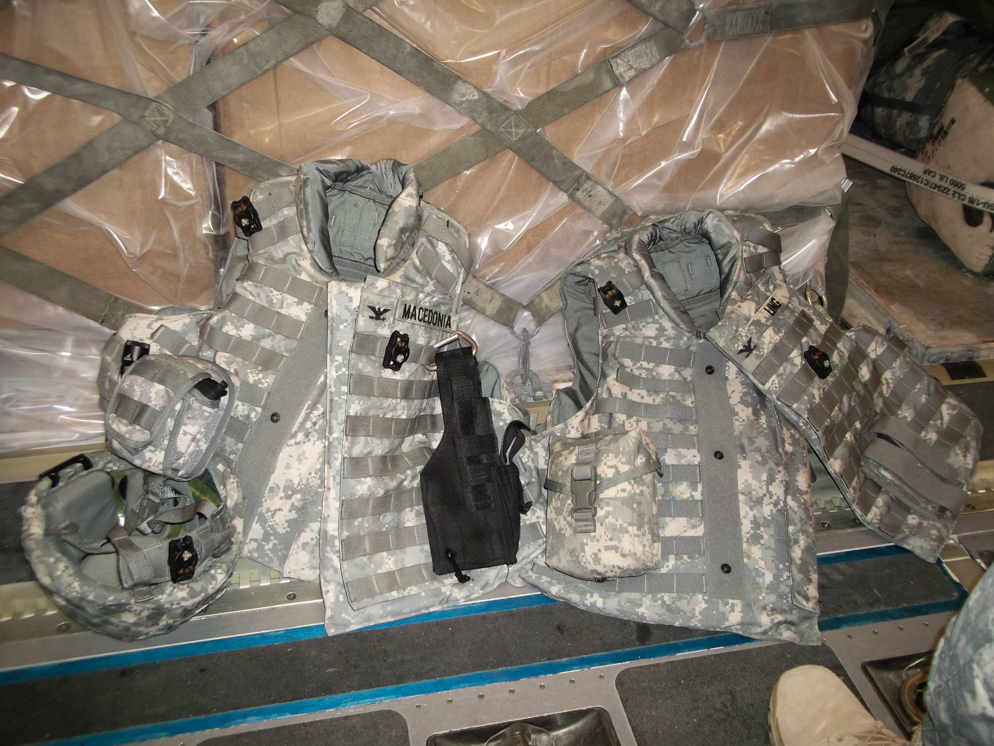 The memo requires evaluation and a 24-hour rest period for troops within 50 meters of a blast, and several other measures to ensure that TBIs are detected and treated. It also includes special provisions for service members who sustain multiple TBIs.

And the 2010 mandate was just the beginning. Today, combat troops often wear sensors that indicate when a bomb blast is strong enough to cause a brain injury. Military doctors are taught that blast waves really can cause physical brain injuries. And service members can get treatment for a TBI without being put on a plane and sent home.

The sweeping changes have brought solace to Macedonia, who still regrets that he once doubted blast waves could physically injure the brain.

"Doing the Gray Team's missions was probably the most awesome healing process that could have ever happened for me," says Macedonia, who has retired from the military. "It really was a way for me to make up for the lapses, the lack of understanding about TBI."