Accessibility links
County Map Shows Where Mosquitoes That Could Carry Zika Have Lived : Shots - Health News A few months ago, health officials published a map that made it look like a big part of the U.S. was at high risk for Zika. Now they've released a new map that paints a very different picture. 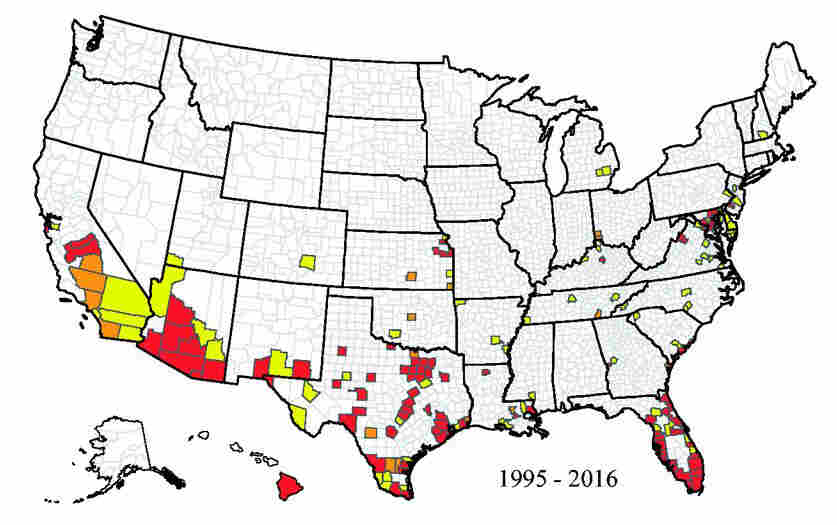 Counties where Aedes aegypti was reported between Jan. 1, 1995, and March 2016. Counties in yellow recorded one year of A. aegypti being present; those shown in orange recorded two years; and those shown in red, three or more years. Centers for Disease Control and Prevention hide caption 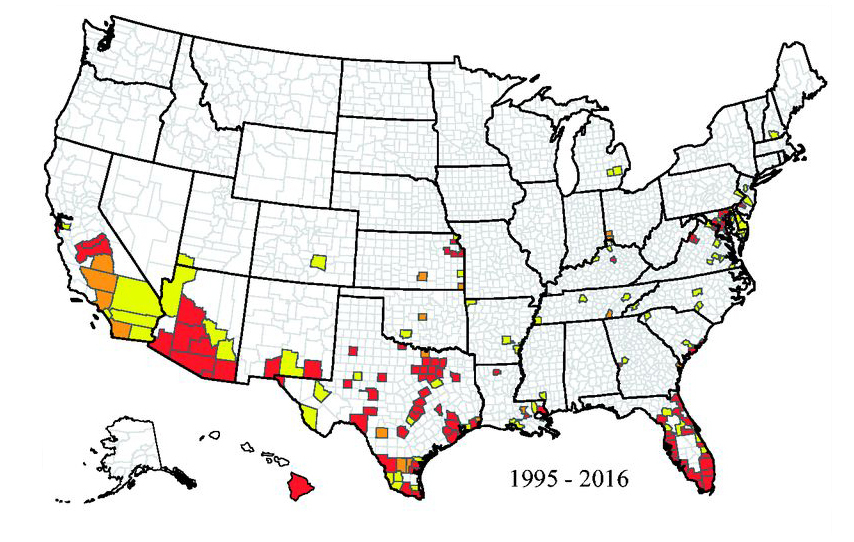 Counties where Aedes aegypti was reported between Jan. 1, 1995, and March 2016. Counties in yellow recorded one year of A. aegypti being present; those shown in orange recorded two years; and those shown in red, three or more years.

A few months ago, the Centers for Disease Control and Prevention published a startling map that showed the parts of the U.S. that could harbor mosquitoes capable of carrying Zika.

Many readers, including myself, thought, "Zika could come to my town! It could come to Connecticut! To Ohio and Indiana! Or to Northern California! Oh goodness!"

The map made it look like a vast swath of the country was at risk for Zika, including New England and the Upper Midwest.

On Thursday, CDC scientists published another mosquito map for the U.S. And it paints a very different picture.

The new map shows counties in which scientists, over the past two decades, have collected Aedes aegypti mosquitoes — the type of insect thought to be spreading Zika in Latin American and the Caribbean.

"The new map is more accurate than the initial one," says Thomas Scott, an entomologist at the University of California, Davis. "The distribution of the A. aegypti mosquito is much more restricted than the initial map showed."

This map represents "the best knowledge of the current distribution of this mosquito based on collection records," entomologist John-Paul Mutebi and his colleagues at the CDC wrote in the Journal of Medical Entomology.

Many of the hot spots for this mosquito aren't surprising. They're places that we already knew are vulnerable to Zika, including counties in southern Florida, along the Gulf Coast and southern Texas. These places have had problems with a virus closely related to Zika, called dengue. They're already on high alert for Zika.

But several hot spots are bit more unexpected — and concerning. "Perhaps the most concerning development for A. aegypti is its establishment in the Southwest, most recently in California in 2013," Mutebi and his co-authors write.

Other surprises include parts of the Bay Area, greater Washington, D.C., and the Dallas-Fort Worth region, which all have established populations of A. aegypti, the map shows.

So why did the first map from the CDC make it look like such an extensive part of the country was at risk for Zika?

"The two maps show different things," Mutebi tells Shots. "The first map showed where the climate is able to sustain populations of A. aegypti. This new map shows reports from counties where these mosquitoes were found in the last 20 years."

And the new map, Mutebi says, is not complete. "Not all counties have mosquito surveillance programs looking for mosquitoes," he says. In places that do, they are often targeting the mosquito that causes West Nile virus, not A. aegypti.

"So just because a county hasn't reported having any A. aegypti mosquitoes doesn't mean they're not there," Mutebi says.

A. aegypti mosquitoes are nasty critters. They chase down people so they can feed on their blood, says virologist Scott Weaver at the University of Texas Medical Branch in Galveston.

"A. aegypti lives in close association with people, feeds almost exclusively on people — not animals — and even comes into people's home," he says. "Its behavior and its ecology are almost ideal for a mosquito to transmit a human virus."