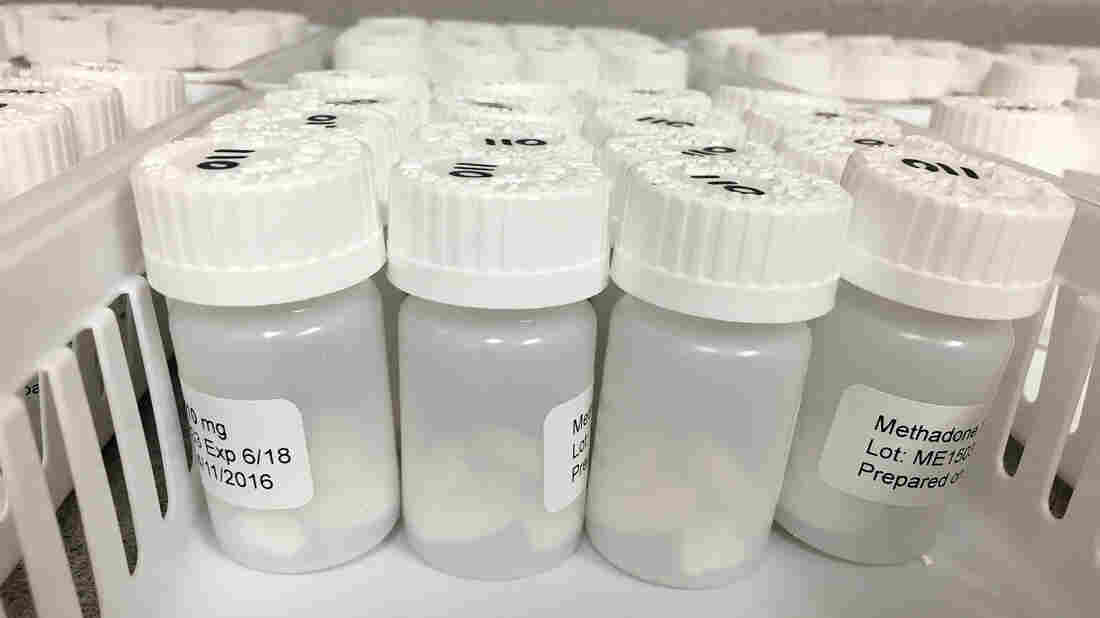 Methadone and similar drugs are legal synthetic opioids that are used to help block the cravings and withdrawal symptoms of people trying to wean themselves off prescription painkillers or heroin. Michell Eloy/WABE hide caption 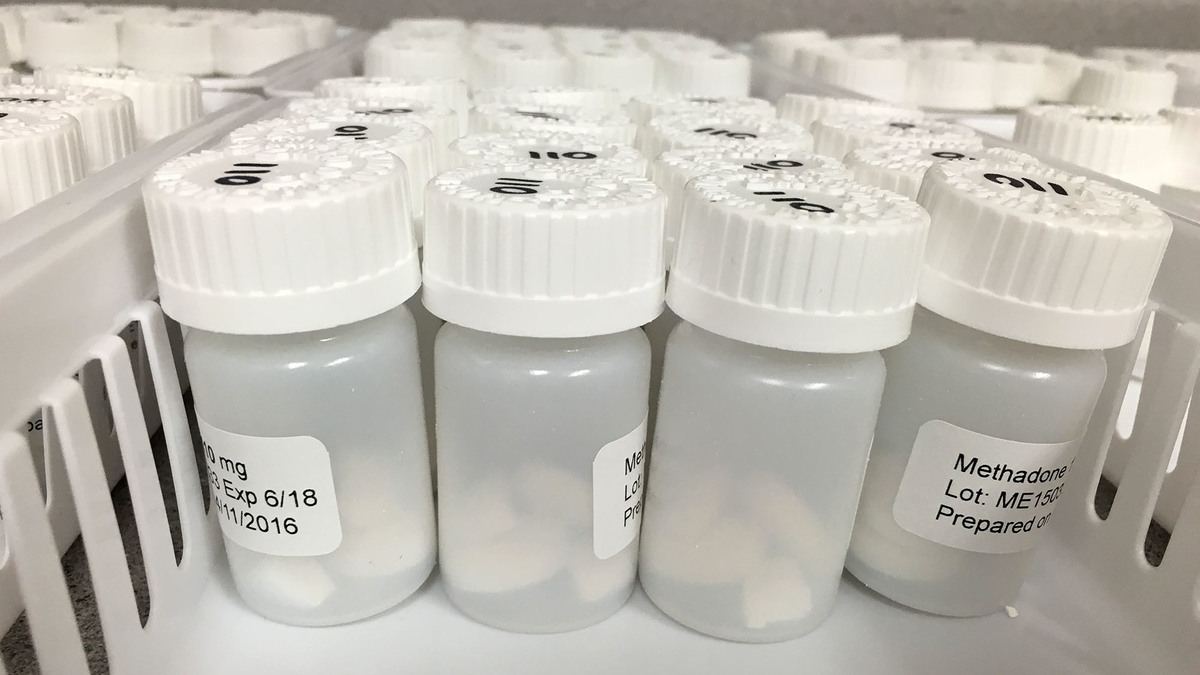 Methadone and similar drugs are legal synthetic opioids that are used to help block the cravings and withdrawal symptoms of people trying to wean themselves off prescription painkillers or heroin.

Zac Talbott sees the irony of running an opioid treatment program from a former doctor's office.

"The funny thing is, a lot of patients are like, 'This is where I first started getting prescribed pain pills,' " Talbott says.

Now, the Tennessee native says those same patients are coming to his clinic in Chatsworth, Ga., a small city about a half-hour south of the Tennessee border, to fight their addiction to those very pills.

Outpatient clinics like the one Talbott co-owns dispense drugs like methadone and buprenorphine, which are legal synthetic opioids that block cravings and withdrawal symptoms. Federal health officials say this medication-assisted treatment, coupled with counseling, is the best way to treat an addiction to prescription painkillers or heroin. Patients are required to show up a set number of times a week — the number of visits determined by how long they've been receiving treatment — to take their medicine in front of a nurse.

Talbott's clinic, Counseling Solutions, started treating patients in February, but he says it is already treating 150 people in a space that's fit for about 200. There's such a need in this part of the state, Talbott says, he is already making expansion plans.

More than 1,200 people died of an overdose in Georgia in 2014, according to the Centers for Disease Control and Prevention, with opioid drugs frequently implicated in those deaths. That's a 10 percent increase over the previous year. So Talbott is outraged that Georgia has put a one-year moratorium on issuing licenses to clinics that use medicine to treat people addicted to heroin or painkillers.

"We're in the middle of an opioid addiction and overdose epidemic," Talbott says. "You just think about that for a minute."

The reason for the moratorium, according to state Sen. Jeff Mullis, a Republican, is the state needs to figure out why so many opioid treatment programs have opened in Georgia. Mullis sponsored the legislation — which has since been signed into law — that created the freeze on new clinics. The law also required that a committee be established to look into Mullis' question.

"If you go to the parking lot of any of these clinics in northwest Georgia," Mullis says, "you'll see as many Tennessee, Alabama, North Carolina, Kentucky tags as you do Georgia tags." People are driving in from all over the South, he says, to get treatment there.

Georgia has 67 opioid treatment programs, more than any other Southeastern state. Tennessee has only 12, in contrast; Alabama has 24, and Mississippi has one. Only Florida comes close numbers-wise, with 65 clinics. But its population is nearly double that of Georgia's.

While individuals who want to open a clinic in Georgia still have to fulfill multiple licensing requirements and approvals from both the state and federal governments, Mullis says it's too easy; unlike other surrounding states, Georgia doesn't have a certificate of need program for narcotic treatment centers. Those programs limit entry or expansion of some health care facilities by requiring operators to show there's a need for it. For opioid treatment programs in Georgia, open competition has been the only real constraint on the number of clinics.

There's also stigma around the addiction drugs used at opioid treatment centers because the drugs dispensed are opioids themselves. Critics say drugs like methadone are replacing one addiction with another.

Tapering off these treatment drugs is optional, and some patients can stay on them all their lives.

Jonathan Connell, who heads the Opioid Treatment Providers of Georgia, an advocacy group for state providers, says pushing people off medication-assisted treatment shouldn't be the focus of lawmakers' efforts.

"If someone stays on a medication, that's not really the issue," he says. "People can still be dependent on something, but not live an active addiction."

He says the problem is that regulations are not enforced properly by the Georgia Department of Community Health, which oversees the clinics.

"We have had some clinics open up — some people with limited knowledge of the field," Connell says. "They have not received surveys. How do we know they're functioning correctly?"

The Department of Community Health has only a small staff to keep track of the 67 clinics — three workers, with another person now in training. An agency spokesman says its rules and regulations also do not specify how frequently treatment centers should be inspected but that re-licensure surveys are conducted every two years.

A shortage of clinics in other states means Georgia's are filling a need other Southern states aren't meeting, Talbott argues.

He has some personal experience to bring to bear on this issue — he is in long-term recovery for an opiate addiction. 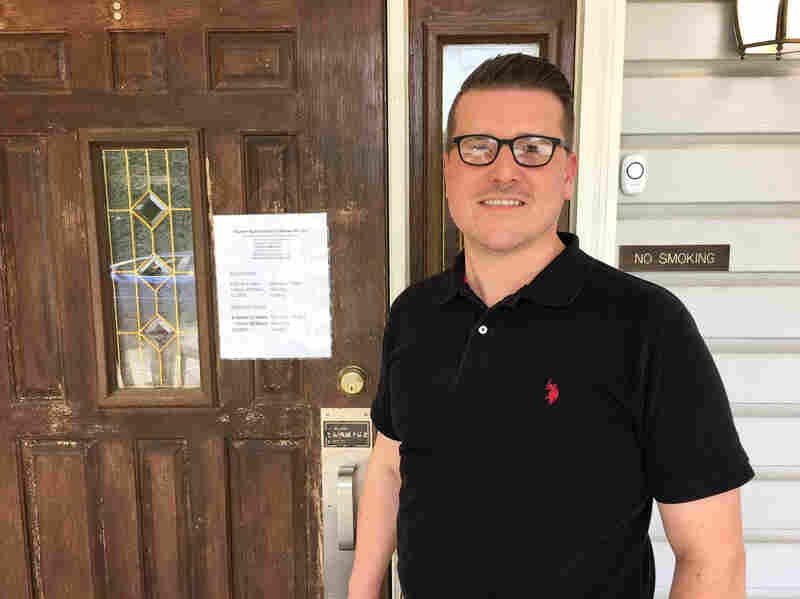 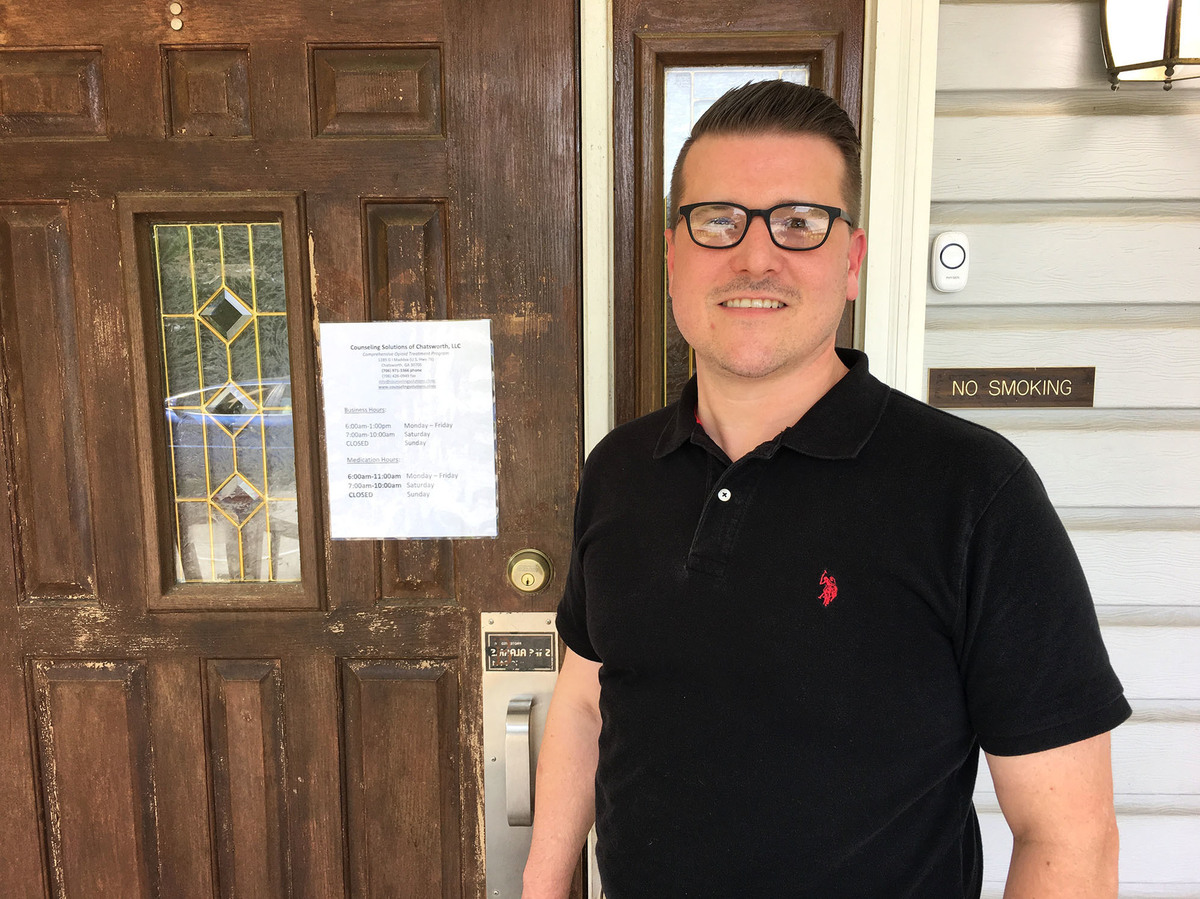 While getting his master's degree in social work eight years ago, Talbott was prescribed painkillers for some lower back pain. He says things spiraled from there.

"I still recall to this day, learning how to help people with behavioral conditions in class, and then going to the bathroom to shoot pills and/or heroin," Talbott says.

He says there were long wait lists at the three Tennessee clinics closest to him that were authorized to treat his opioid dependency. Rather than wait, he drove four hours back and forth between Knoxville and a clinic in Rossville, Ga., nearly every day for six months to get treatment.

He says he's grateful for that Georgia clinic.

"The old Zac — that Zac that was in that graduate program for clinical social work — quickly came back," he says, once he was able to stop the opioid use.

Georgia's moratorium went into effect June 1. It will last a year, to give the state Legislature time to look at new ways to regulate the clinics.

This story is part of NPR's reporting partnership with WABE and Kaiser Health News.