Accessibility links
Baby-Making Could Move From The Bedroom To The Lab : Shots - Health News Before long, human embryos will be made so easily in the laboratory that many people will choose that route for having children. The option would offer genetic control at an ethical price. 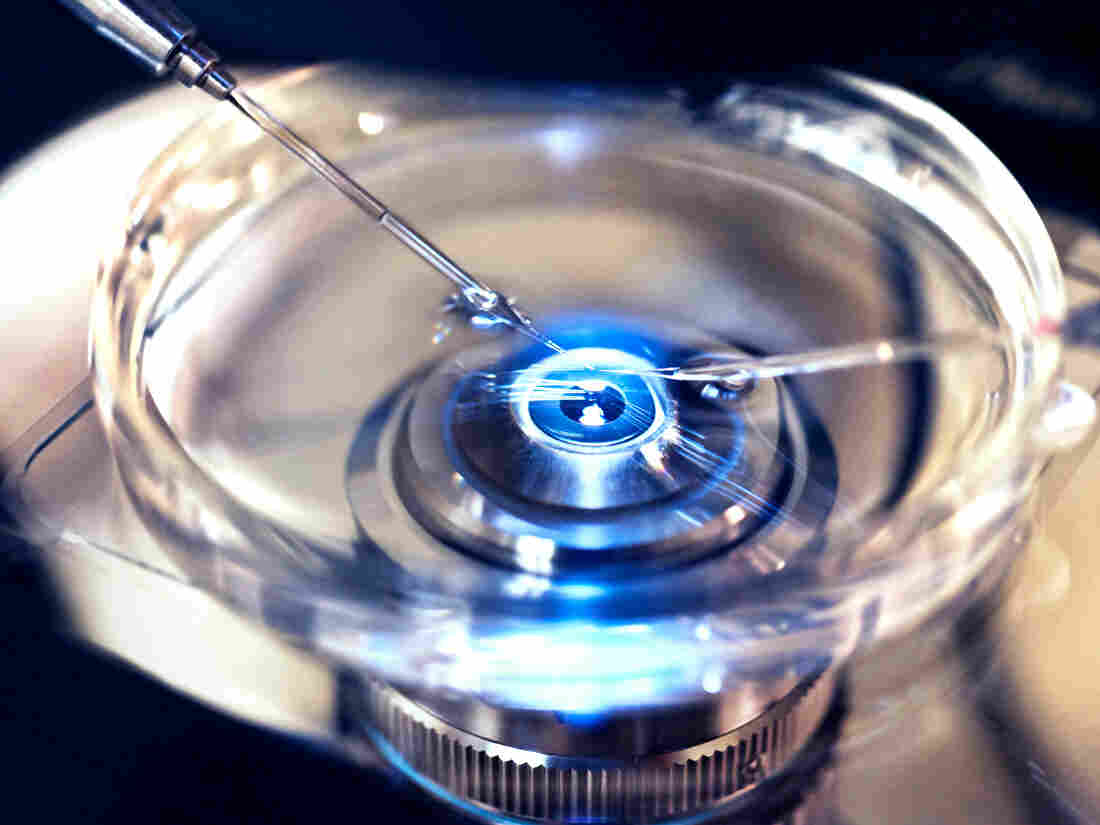 The creation of eggs from skin cells and genetic screening of embryos could transform in vitro fertilization for the masses. Ted Horowitz/Getty Images hide caption 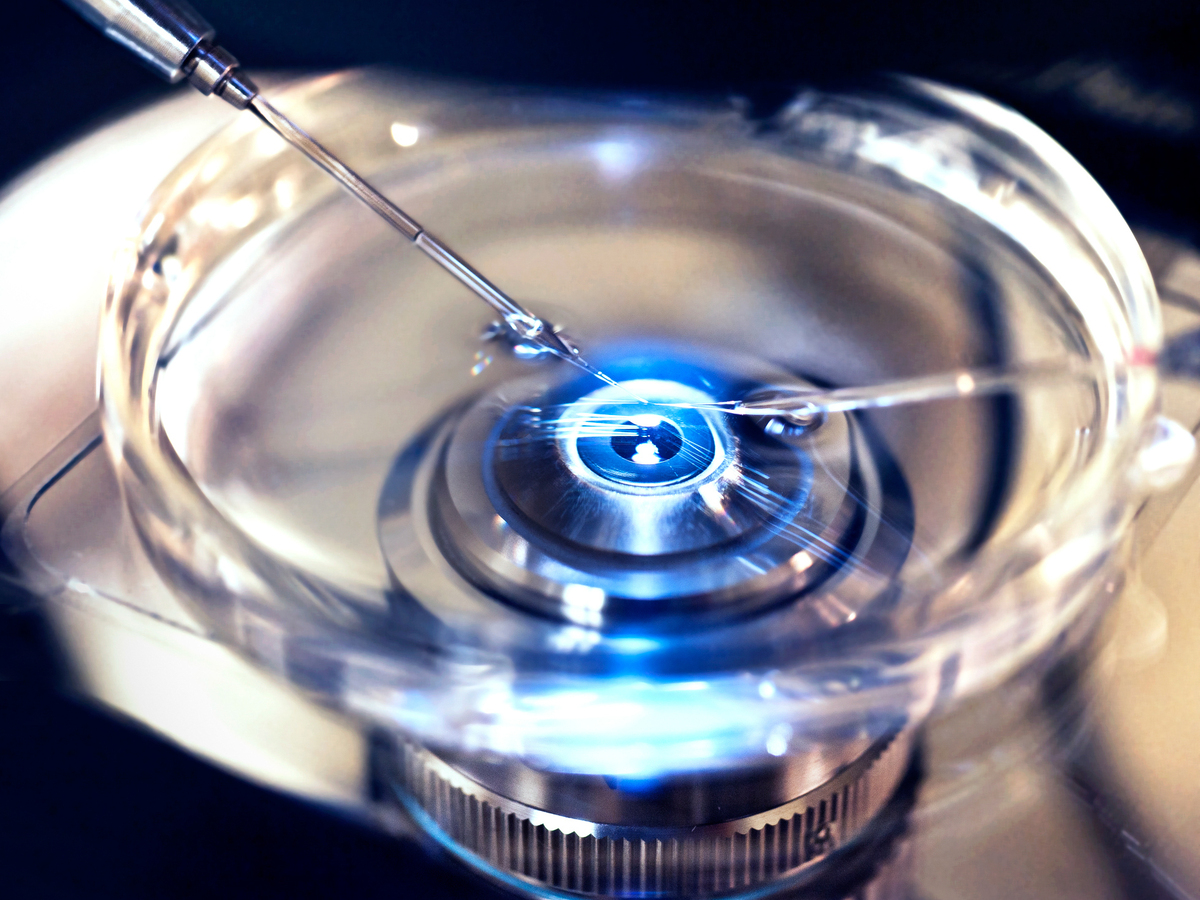 The creation of eggs from skin cells and genetic screening of embryos could transform in vitro fertilization for the masses.

Stanford law professor and bioethicist Hank Greely predicts that in the future most people in developed countries won't have sex to make babies. Instead they'll choose to control their child's genetics by making embryos in a lab.

The End of Sex and the Future of Human Reproduction

Title
The End of Sex and the Future of Human Reproduction
Author
Henry T. Greely

On KQED's Forum program, Michael Krasny spoke with Greely about his new book, The End of Sex and the Future of Human Reproduction. Greely highlights the ethical and legal questions that might arise in the future's reproductive paradigm.

Krasny: There are a lot of new advances, technology and so forth. We reached the point where you get some sperm donor and a little piece of skin and you're in business because of stem cells.

Greely: My book argues that two different biomedical innovations coming from different directions and not really propelled by reproduction are going to combine here. One is whole-genome sequencing, and the other is what I call easy PGD, preimplantation genetic diagnosis, [that] is, getting rid of egg harvest ... which is unpleasant, dangerous and really expensive.

This ties in with in vitro fertilization also being not as onerous as it has been in the past.

What I think is going to happen, we'll be able to take some skin cells from anyone and turn them into any cell type. Make these into eggs or sperm and that is going to make IVF much easier, cheaper and less dangerous.

You [can] decide, "Well, I want these traits," and it becomes a selective process.

Yes, I think we will see an increased and broad use of embryo selection. I would be careful to set the time frame at 20-40 years. I think we'll actually see a world where most babies born to people with good health coverage will be conceived in the lab. People will make about a hundred embryos, each will have its whole genome tested, and the parents will be [asked ... "Tell] us what you want to know and then tell us what embryo you want."

This could bring down health care costs, and it is also good for same-sex couples, isn't it?

Well, yes and maybe. I think it should bring down health care costs, and, in fact, one of the advantages to it is that it would be so beneficial for public health care costs that I think it would be provided for free. If it costs say, $10,000 to start a baby this way, 100 babies is a million dollars. If you avoid the birth of one baby with a serious genetic disease, you've saved $3 [million to] $5 million. The same-sex issue, I think that's going to work, but that's another jump. That would be taking a skin cell ... from a woman and turning it into a sperm. I think [it's] probable, but that hasn't been done yet.

A lot of people talk about playing God, but before we get into that, there's the rubric of consumer eugenics. And there is a eugenics fear when we start talking about selection.

There certainly is. Eugenics is a slippery word; it means many things to different people. To some, it's state-enforced reproductive control. To some ... what we had was state-enforced sterilization. To some, it's any kind of reproductive choices, but those are different things. For me, I think the coercion is much more important than the issues of selection. The concern about the state or the insurance company or someone else, forcing you to pick particular babies, worries me a lot more than having parents make choices, though that raises its own set of questions.

What do you see as the biggest question here?

I worry about the dilemma of Republican legislators in very conservative states. They want to spend as little money as possible on Medicaid. I could imagine a state saying, "We're not going to pay for this via Medicaid," which would mean that the roughly 40-50 percent of babies born in that state who are paid for by Medicaid wouldn't get to go through this, and although they are not "superbabies," adding another 10-20 percent health advantage to the babies of the rich over the babies of the poor is a bad thing.

Listen to the full interview here. Greely shares his thoughts on cost, socioeconomics, gene editing and the ethics of designer babies.

This story was produced by KQED's daily health and technology blog, Future of You. The blog's host and editor is Jon Brooks.