Accessibility links
Texas Has Few Places Where Medical Residents Can Learn About Abortion : Shots - Health News Accredited medical residency programs have to teach doctors how to perform abortions. But interpretation of the requirement varies, especially in a state like Texas where training options are scarce. 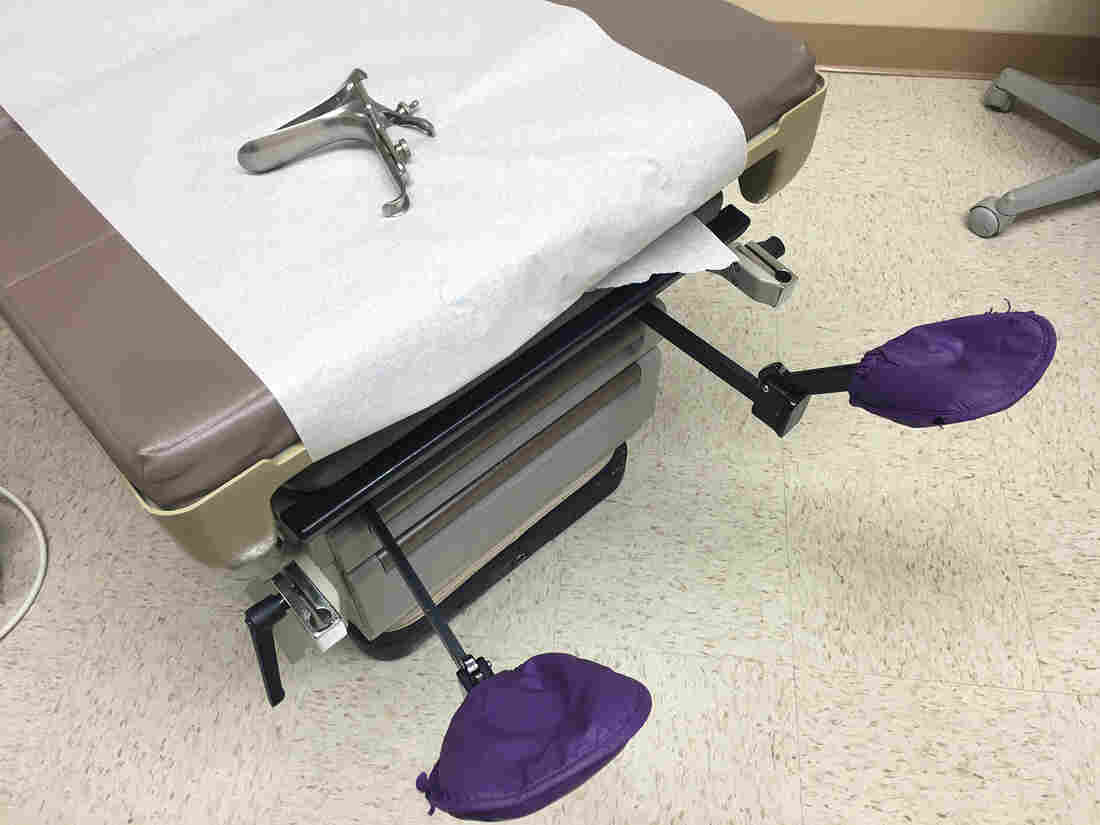 Medical residents training to be OB-GYNs in Texas don't have many places where they can learn how to perform abortions. Carrie Feibel/Houston Public Media hide caption 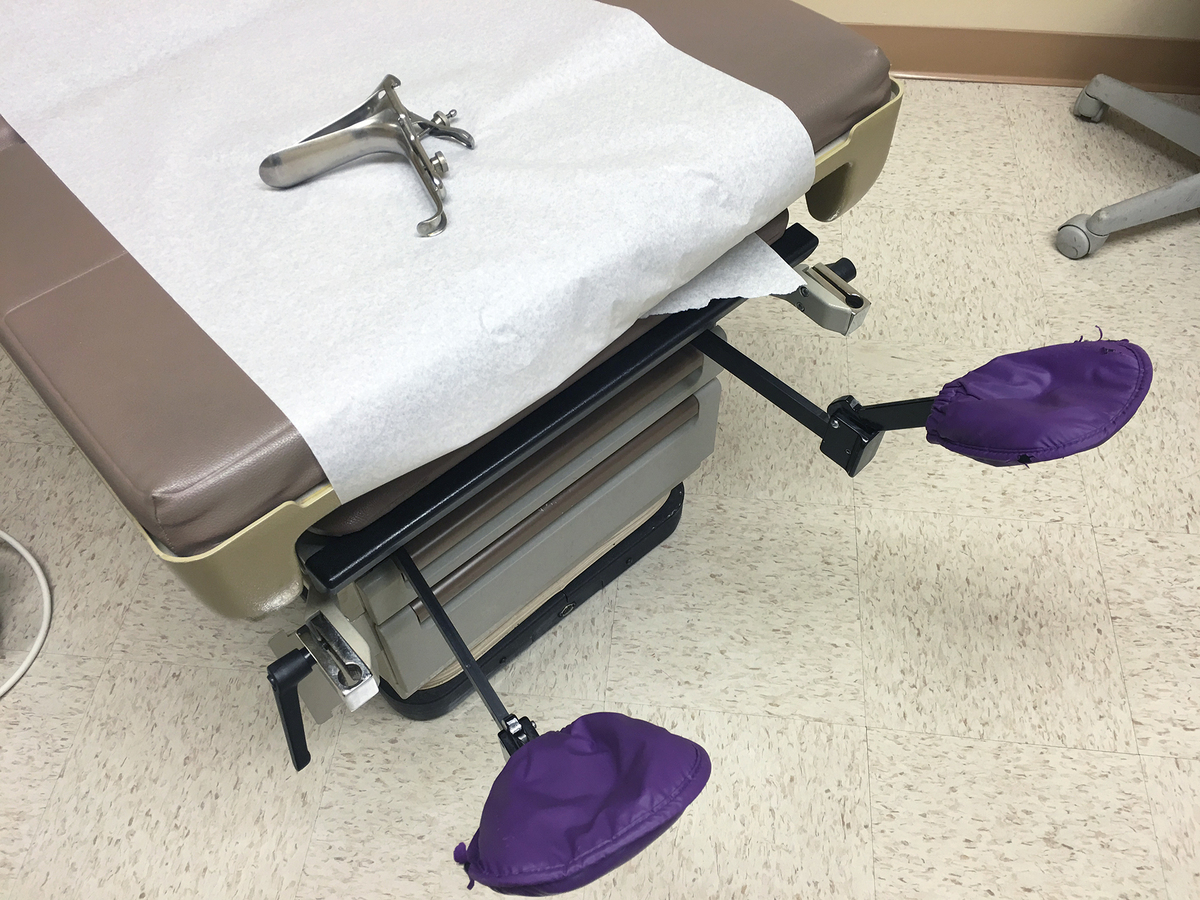 Medical residents training to be OB-GYNs in Texas don't have many places where they can learn how to perform abortions.

Abortion is one of the more common procedures performed in the U.S., more common even than appendectomy. But as clinics in Texas close, finding a place in the state where medical residents training to be OB-GYNs can learn to do abortions is getting harder.

"There are places in Texas where there are OB-GYN residents who can't get anywhere to be trained," said a senior doctor at one Texas clinic who is also a medical school professor. The physician asked not to be named to avoid backlash from anti-abortion groups and politicians.

Clinics that used to perform abortions have closed recently in Lubbock, Odessa and other Texas cities. But the professor's clinic, which still does abortions and trains some OB-GYN residents, can't take up the slack.

"We've been approached by many different residency programs about the ability to train their residents," she said. "Unfortunately, we just don't have the capability to train everyone."

The day we spoke, the doctor was spending the afternoon at the clinic, supervising a third-year resident. The resident agreed to be identified by her middle name, Jane.

During her four years of residency, Jane spent about a month doing rotations at this clinic. The experience improved her medical skills, she said, but also gave her a new political perspective on what it means to be a doctor.

"It makes it even more obvious how important it is for women to have access to abortions," she said. The rotation made her more committed to providing abortions throughout her career, she added. "If I think a woman needs access and I have the skills to provide access, I should," she said.

Jane listened as the senior doctor prepared her for the next patient: "She's 21 years old, and this is her first pregnancy. She is at about eight weeks today. Do you have any questions about what we're going to be doing or the procedure?"

Later, I asked the professor if it's hard to teach abortion. She said it's not difficult to teach the procedure.

"The technical procedure is the same, whether you are doing it for a miscarriage, or whether you're doing it to terminate an ongoing pregnancy," she said.

That procedure is known as a dilation and curettage, or D and C. The cervix is dilated, and then a suction instrument is inserted to remove tissue from the uterus.

D and C's are also used to treat excessive bleeding, or to take a biopsy from inside the uterus.

"I like to say that a D and C, a suction D and C even, is bread and butter gynecology," she explained.

OB-GYNs have always learned the D and C procedure. There's nothing controversial about it, per se. But when it's done because a woman chooses to end a pregnancy, it's called an elective abortion, and to be able to perform the procedure in such a case, the doctor needs to have additional training.

Elective abortions are almost always done on an outpatient basis. To do them, doctors learn how to counsel the patients and manage their pain during the five-minute procedure. They also need to learn how to administer medical abortions — the ones that use pills.

In addition, many states like Texas require doctors to perform extra steps, such as reading out loud a state-mandated script to the woman, or having her listen to the fetal heartbeat.

OB-GYN residents can't learn all that's required without spending time at an outpatient clinic, which is where most abortions in Texas take place.

But in Texas, there are only 18 of those clinics still in operation.

Use the "+" sign above to zoom in and see how residency programs responded to the question, "How are OB-GYN residents trained in abortion?"

That worries Lori Freedman, a medical sociologist at the University of California, San Francisco. "How can you have abortion provision if you don't have trained doctors?" Freedman said. "Especially the ones likely to stay in your state."

Abortion training has become more common in the U.S. but only in some areas in the country. "We've trained a lot of people, but they're staying in relatively liberal, urban areas," Freedman said.

Texas has 18 OB-GYN residency programs. All of them undergo periodic reviews by the Accreditation Council for Graduate Medical Education, or ACGME, in Chicago.

One of the things the reviewers look for is whether residents have opportunities to learn about induced abortion, called that to distinguish it from a miscarriage.

All 18 residency programs in Texas are currently accredited, even though some of them are located in cities where outpatient abortion providers have closed.

He explained the residents don't have to perform elective abortions. They can practice terminating pregnancies in the hospital, for other reasons.

"As long as they're getting sufficient experience in some form of abortion, you know, where the mother's life is in danger, where there's significant neonatal abnormalities," Potts said.

In other words, to become an OB-GYN, the resident must know how to safely empty a woman's uterus if her pregnancy is experiencing a medical complication. For situations when it's the woman choice to end pregnancy, residents can hear lectures about it, perform simulations or practice counseling skills on each other.

Some Texas professors maintain that minimal standard of experience is good enough — or, at least, the best they can do under the circumstances.

But I asked Dr. Bernard Rosenfeld, who has been providing abortions in Houston for decades, if he thought it really was enough to learn how to perform elective abortions.

"No, absolutely not," he said.

When residents are learning to do D and C's, they usually do them in the hospital, and the patient is often asleep, Rosenfeld pointed out. But most abortions in this country take place in outpatient clinics.

At the clinics, patients get a local anesthetic or none at all. That makes the abortion safer for the patient, but it requires more skill on the part of the doctor, according to Rosenfeld and other experts.

"Time is a big factor, and causing as least pain as possible, and having a very gentle touch," Rosenfeld said. "But all that is learned."

Residents won't have competence in performing abortions until they do dozens of outpatient abortions, Rosenfeld said.

"Nobody would ever say that about a cesarean delivery or a regular delivery: 'Well, OK, you just saw one or two, so you can just do them,' " he said. "Lots of time you'll have uterine abnormalities and you're not going to know unless you've done many procedures what to do with a uterine abnormality."

There's one more intangible, but critical, experience residents get from abortion training, many doctors say.

Jane summed it up this way: "Every woman has a different story and a different reason why she chooses to end her pregnancy."

Hearing those stories from patients is crucial to an OB-GYN's professional development, said Dr. Jody Steinauer, an OB-GYN professor and researcher at the Bixby Center for Global Reproductive Health at UCSF.

"When they spend time in a setting that provides abortion care, they have real epiphanies," Steinauer said. "They become more aware of their biases. They're surprised that more than half of women having abortion are already mothers, for example."

Steinauer's research also shows that OB-GYNs who have access to training during their medical residencies are more likely to provide abortion later in their careers.

But some doctors question the need for more training, saying if residents really want abortion skills they can leave Texas to acquire them, and then come back to the state to practice.

"It should not be part of any kind of medical training to do elective, induced abortions," she said.

Residents have always been able to "opt out" of abortion training if they have moral or religious objections, Harrison acknowledged. But some residents might feel pressured to do the rotation, she said, and they could end up indoctrinated with the view that elective abortion is OK.

"If you do a procedure that you have moral qualms with, there's a kind of desensitization that goes on," Harrison said. "The attempt to force residents to participate in abortion is an attempt to desensitize those residents, so they will have less ability to think clearly about what that procedure is actually about."

But Freedman, the medical sociologist, disagreed that abortion training amounts to indoctrination.

"If you look at medicine in general, how many things do we do to teach people empathy, sensitivity, compassion about a lot of things?" she asked.

Doctors will always have patients whose life decisions they privately disagree with, Freedman said, but it doesn't help the patient when doctors judge them or withhold a treatment or procedure.

"Things happen to people that they don't want, healthwise, all the time," she said. "We just need doctors to know how to do this."

According to a national survey, 97 percent of OB-GYNs have had a patient who wanted an abortion. But only 14 percent of those doctors actually provide abortions.