Accessibility links
Behavioral Therapy Reduces Recidivism In Prisoners : Shots - Health News More than half of prisoners released from prison are rearrested within a year. Cognitive therapy can help prisoners change the thinking that gets them in trouble, like "I'll never back down." 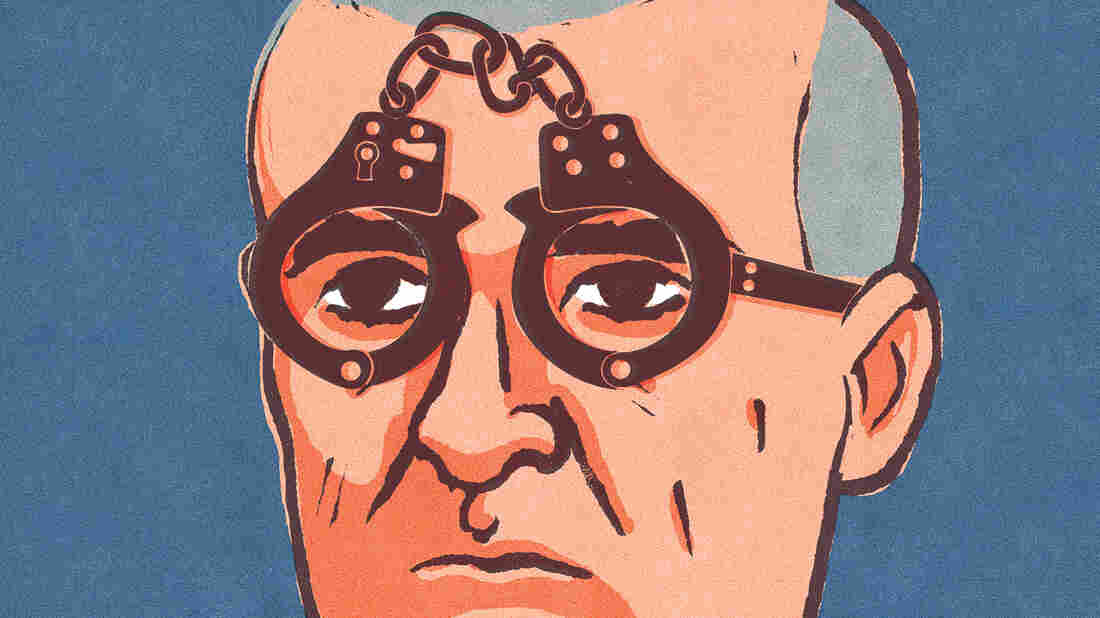 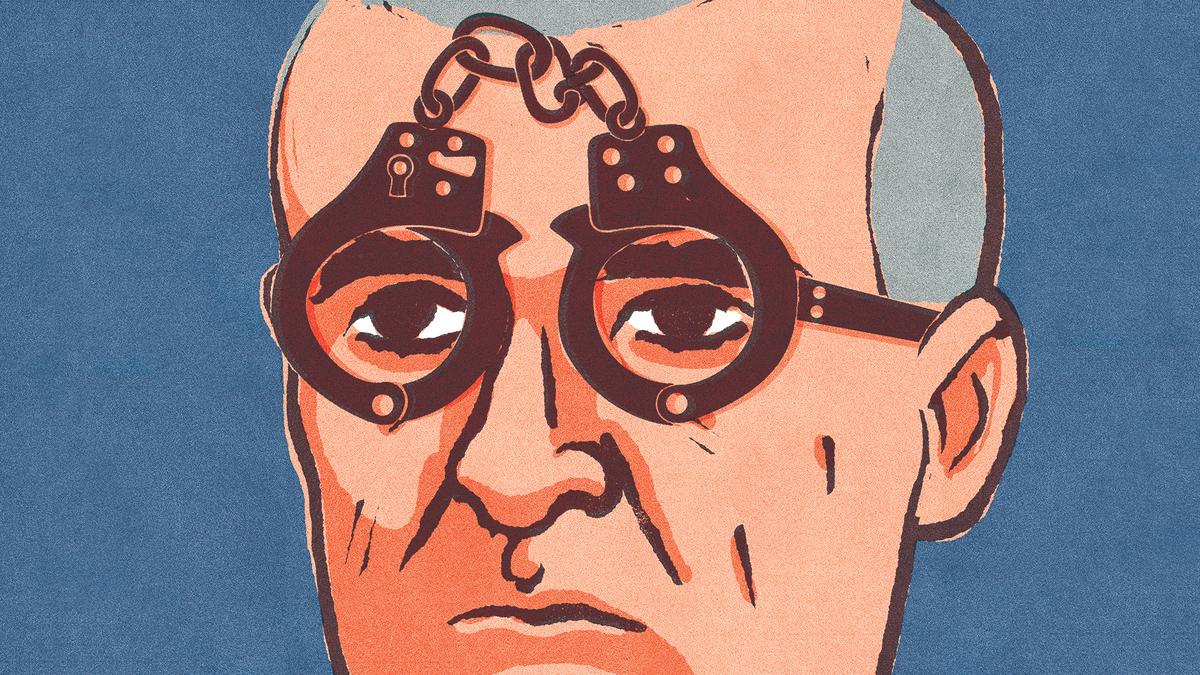 Hard-core criminals are trapped in a vicious circle of their own thinking. Cognitive treatment of offenders can show them a way out of that trap. With effort and practice, even the most serious offenders can learn to change their thinking about other people and themselves. They can learn to be good citizens, and feel good about it. But in most cases the criminal justice system doesn't present them that opportunity — not in a form that offenders recognize as genuine.

Since 1973, I've been working to develop and deliver cognitive treatment to medium- to high-risk offenders in juvenile and adult detention centers, jails and prisons. The treatment is rooted in cognitive-behavioral therapy, which has proved effective in treating a wide range of mental disorders.

In the 1950s and 1960s, psychiatrist Aaron Beck discovered that his depressed patients had habits of thinking that kept them depressed. ("I'm no good.") At about the same time, Albert Ellis found that patients with a wide range of neuroses held what he called "irrational beliefs." ("Everyone must like me all the time.") Both based their psychotherapy on leading their patients to change that thinking.

We like to think of our own personalities, and those of our family and friends, as predictable, constant over time. But what if they aren't? What if nothing stays constant over a lifetime? Explore that enigma in the latest episode of the NPR podcast Invisibilia.

In correctional treatment, cognitive therapy has evolved to include cognitive skills training, like how to solve problems, how to deal with social situations, and how to control your anger.

The idea is to change the thinking that lands offenders in trouble, like "I'll never snitch," "I'll never back down," "I'm going to take what I want," and "If anyone disrespects me, I'm going to attack." Forms of cognitive treatment have become the predominant treatment for offenders in the U.S. and Europe. Underlying it is the realization that criminal behavior is the result of criminal ways of thinking, and that for offenders to change their behavior they must change the way they think.

In the 1990s, Canadian researchers discovered that treatment of offenders is effective, but only if it addresses what they called "criminogenic needs." Chief among these is criminal thinking. More recently, researchers have established that cognitive treatment programs delivered with professional standards can reduce recidivism by 25 to 35 percent. That means saving taxpayer money on incarceration, which costs $31,286 per inmate per year on average. It also means safer communities, more intact families, more people back in the workplace.

This doesn't mean we should replace incarceration with treatment, or let people out of prison early just because they have taken treatment. But adding treatment to incarceration provides hope to offenders now, and benefits to society in the future.

Incarceration is a basic tool of criminal justice, but when the sole purpose is punishment and confinement, offenders respond, in the privacy of their own minds, with resentment and defiance. The thinking that led them to offend is not extinguished by punishment; it is reinforced.

Criminal justice need not be solely punitive. We can enforce the law without compromise and without triggering offenders' resistance. We can offer genuine opportunities to change. And we can acknowledge offenders' innate freedom to choose the attitudes they live by. My colleagues and I call this strategy "supportive authority." It consists of conveying three messages at the same time, spoken with one voice.

Enforcement of rules and laws is the core, but we don't stop there. Punishment is tempered with the opportunity to join with us in our common society. That invitation must be real, and each offender must be able to recognize it as such. It includes the opportunity to escape the trap of their habits of thinking.

And finally, we acknowledge that each offender will decide whether to take the opportunity to change or to continue to break the law. Offenders know they always retain the power to freely think, the human freedom to choose their own path in life, whether the rest of us like it or not. By acknowledging this freedom, we are giving them nothing they don't already have. We are simply conveying respect for them as human beings. As Viktor Frankl said in Man's Search For Meaning: "Everything can be taken from a man but one thing: the last of the human freedoms — to choose one's attitude in any given set of circumstances, to choose one's own way."

Providing offenders an opportunity to change their thinking, their lives and their place in society is in everyone's interest. It does not compromise our enforcement of the law. But it demands changes in our thinking: to see criminals as fellow human beings and to provide genuine opportunities for ex-offenders to take part in society.

Time and again I've seen real change happen. Ken had been a criminal all his life. "I wanted to be the baddest criminal anybody had ever seen," he said. In prison he was a convict leader and a strong upholder of the convict code. In spite of his reputation, the administration of Oregon State Penitentiary recognized his potential to change. Ken came to understand the pain he had brought to others and that his hurtful actions came not from what others had done to him but from his own ways of thinking. He developed a new goal: "I want to be an honorable man."

Once he was out of prison, Ken learned and practiced ways to think that allowed him to marry, to hold jobs in drug treatment programs or gas stations or anything he could find to earn an honest living. The 20-plus years since his release from prison have been hard, but he's a taxpaying citizen — and an honorable man.

I've also seen failures. Like many medical treatments, sometimes behavioral treatment works and sometimes it doesn't. People who take statins to lower cholesterol sometimes still have heart attacks, and convicts who have been in treatment programs sometimes re-offend. The question is, how can we maximize the positive results and minimize the failures?

I recently visited Red Onion State Prison in Wise County, Va., a "supermax" facility for "the worst of the worst" that had come under Department of Justice scrutiny for excessive use of solitary confinement. This prison is in the process of changing from what had been a culture of control and punishment into a culture of control and hope. Prison officers and counselors are trained to treat prisoners with respect. They are also trained to support and deliver an array of cognitive treatment programs. Offenders are presented with pathways leading from solitary confinement to lower levels of control and eventually, for most of them, to re-entry and life in the community.

At Red Onion, cognitive treatment is a key piece of the system, but only a piece. The whole prison is the intervention.

Jack Bush is co-developer of the treatment program Thinking For A Change, published by The National Institute of Corrections, and co-author with Daryl Harris and Richard Parker of Cognitive Self Change: How Offenders Experience the World and What We Can Do About It (Wiley Blackwell, 2016).