Accessibility links
FluMist Vaccine Lost Its Punch : Shots - Health News A CDC advisory panel concluded the nasal spray vaccine is so ineffective that it shouldn't be used by anyone during the 2016-2017 flu season. Until 2015, the spray was the top choice for kids. 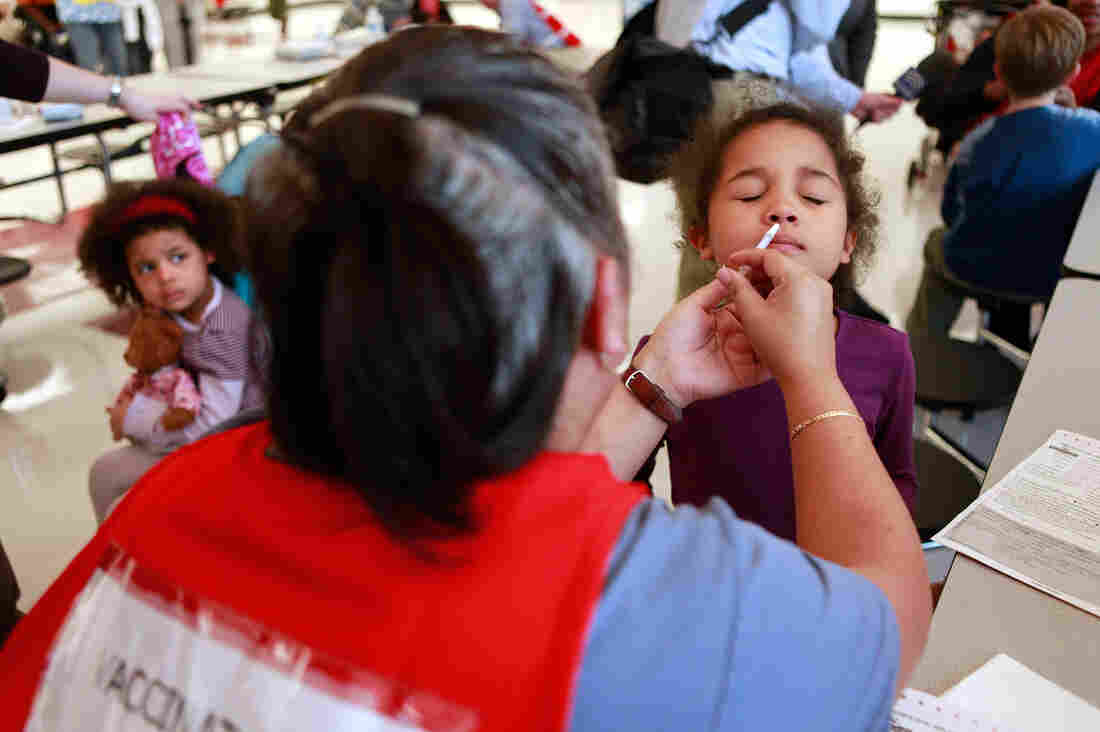 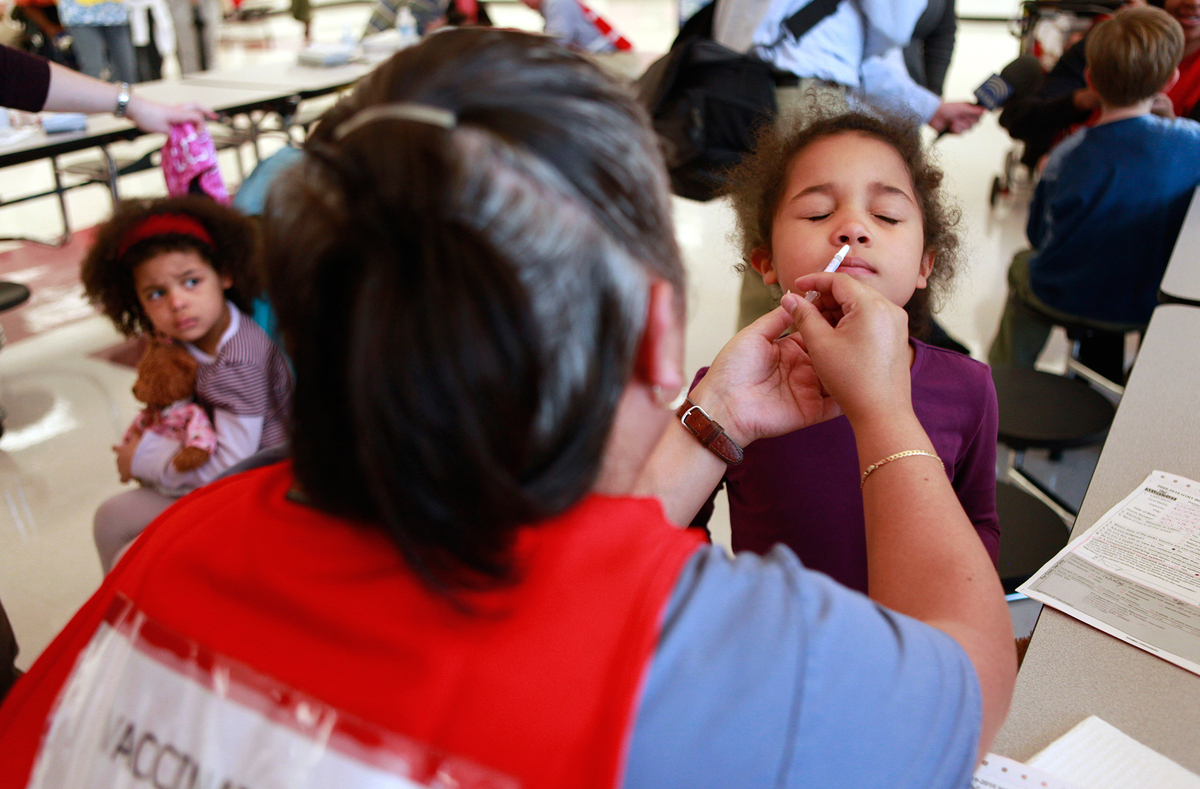 Back in 2009, Ella Curry, 6, received a spritz of FluMist at Northwood High School in Silver Spring, Md.

What led to the abrupt fall of FluMist — the nasal spray version of influenza vaccine — which until recently was considered the first choice for younger children?

On Wednesday, an advisory panel to the Centers for Disease Control and Prevention concluded that the spray version was so ineffective, it shouldn't be used by anyone during the 2016-2017 flu season.

Just two years ago, that same Advisory Committee on Immunization Practices recommended FluMist as the preferred alternative for most kids ages 2-8, after reviewing several studies from 2006-2007 that suggested the spray was more effective in kids than the injectable forms of the vaccine.

What changed to make the spray so much less effective than studies had shown it to be in the past?

The bottom line is that right now "we don't understand what it is," said David Kimberlin, a professor of pediatrics at the University of Alabama, Birmingham, who said academic researchers and those at MedImmune, the subsidiary of Astra Zeneca that makes FluMist, are working to get answers.

Finding trouble spots in the timeline

FluMist is a live attenuated vaccine, meaning it contains a weakened version of the influenza virus but doesn't give the recipient the flu. Instead, the spray sparks the body's immune system to create antibodies to the virus. The injectable forms of the vaccine contain killed versions of the virus.

Among several studies the panel considered when it made its July 2014 preferential recommendation for FluMist was a 2004 randomized controlled trial — considered the best type of study — that found a 55 percent reduction in the number of flu cases among children who received the nasal spray compared with those who got the shot. Results were reported in the New England Journal of Medicine in 2007.

Three months after it made the recommendation, however, the CDC received some troubling data. During the 2013-2014 flu season, the nasal spray showed no measurable effectiveness against the pandemic H1N1 virus in kids ages 2 to 8. That was the predominant type of influenza virus circulating that year.

As a result, the panel in February 2015 didn't renew its preference for FluMist for the next flu season, although it was still considered a viable option.

At that meeting, the panel also heard that the spray had performed poorly in the 2014-2015 season.

Because vaccine makers have to guess months ahead of time what the predominant strains of the virus will be, designing the correct combination is always a gamble.

For its part, AstraZeneca said the CDC's data for 2015-2016 are in sharp contrast with its own studies as well as preliminary findings by public health officials abroad.

"These findings demonstrate that FluMist ... was 46-58 percent effective overall against the circulating influenza strains during the 2015-2016 season," the firm said in a release Thursday.

In search of an explanation

In any given flu season, vaccine effectiveness varies. One factor is how well the vaccines match the virus that is actually prevalent. Other factors influencing effectiveness include the age and general health of the recipient. In the overall population, the CDC says studies show vaccines can reduce the risk of flu by about 50 to 60 percent when the vaccines are well-matched.

Now, researchers are trying to see what — if any — is the common factor behind FluMist's recent poor performance.

There's not a clear answer, said Henry Bernstein, a professor of pediatrics at Hofstra Northwell School of Medicine in New York and an ex officio member of the committee on infectious diseases for the American Academy of Pediatrics.

"We know that the influenza virus itself is totally unpredictable from one year to the next," he said.

Among the questions researchers are considering is why the strain of pandemic H1N1 used in the 2013-2014 flu season didn't perform well. The manufacturer's attempt to fix it in following seasons also did not work.

Several years ago, the vaccine also went from incorporating three flu virus strains to four. Did that somehow reduce its effectiveness? The earlier studies demonstrating that the spray was more effective than the shots were based on the three-virus vaccine, not the four-virus version.

Researchers will investigate whether the vaccine loses effectiveness for some reason when given to children who have had many previous flu vaccinations.

Uncertainty comes along with the territory for researchers.

But it's harder for the general public. Kids are bound to be especially disappointed.

"Once they found out about the nasal vaccine instead of the shot, they strongly, strongly preferred the nasal one," said Elizabeth Howton of Falls Church, Va., who has an 8-year-old and a 10-year-old.

Howton said she fears the uncertainty now surrounding the nasal spray will add to the skepticism some parents have about vaccines in general.

For her kids, there will be no skipping the vaccine. Even though it means a shot. Howton said she expects to offer "copious bribes," to sweeten the deal.

"I know they will be very disappointed, but I will still get them vaccinated," said Howton.

The public should be reassured that recommendation not to offer FluMist shows that public health agencies are watching carefully, said Bernstein.

"People need to recognize and applaud the idea that this type of monitoring and evaluation happens continuously," he said. "The CDC does evaluate the effectiveness of these public health initiatives, including vaccine effectiveness and safety."

While people who don't like needles will be disappointed, FluMist's absence is not likely to lead to an overall shortage, experts say.

The spray made up about 8 percent, according to the CDC, of the total projected supply of 176 million doses of flu vaccine being prepared for the upcoming flu season.

And despite the loss of this form of vaccine, the CDC and other experts continue to strongly recommend that just about everyone 6 months and older get vaccinated because influenza can cause serious illness and is blamed for thousands of deaths each year.

"The importance of preventing flu hasn't changed," Kimberlin said. "What has changed is we have one less tool."

Kaiser Health News is a service of the nonprofit Kaiser Family Foundation. Neither one is affiliated with the health insurer Kaiser Permanente. Follow Julie Appleby on Twitter: @Julie_appleby