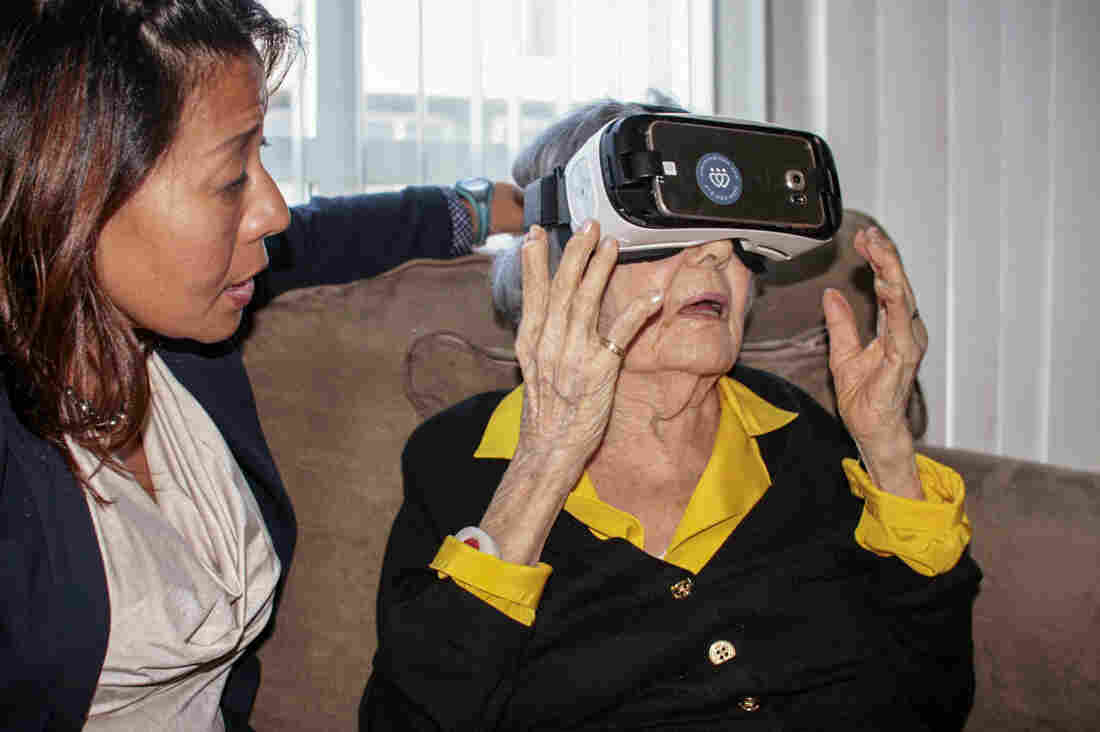 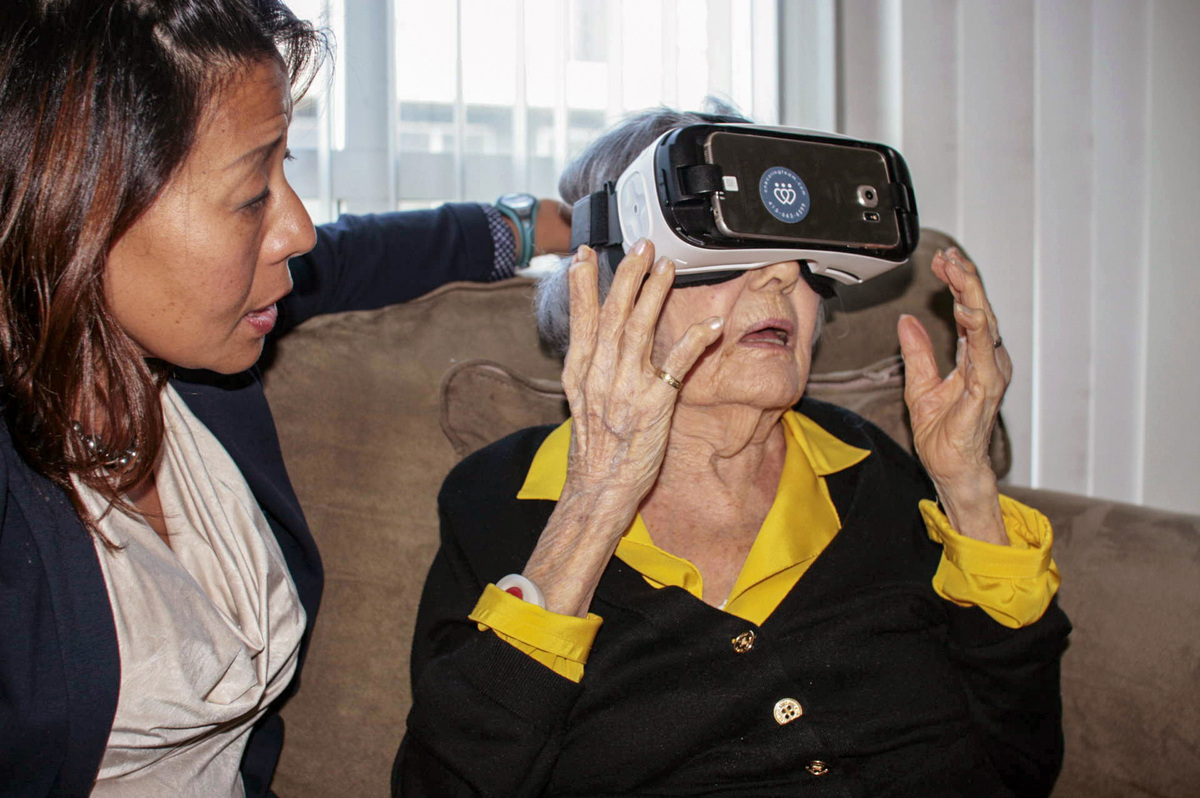 Virginia Anderlini (right) was the first private client to try out Dr. Sonya Kim's new virtual reality program for the elderly, and says she's eager to see more. Kim's handful of programs are still at the demo stage.

Virginia Anderlini is 103 years old, and she is about to take her sixth trip into virtual reality.

In real life, she is sitting on the sofa in the bay window of her San Francisco assisted-living facility. Next to her, Dr. Sonya Kim gently tugs the straps that anchor the headset over Anderlini's eyes.

But in the virtual world, Anderlini is on a Hawaiian beach, and it's sunset, and she is surrounded by a glistening sea and a molten, purple-red sky. If she looks up, she sees the fronds of an enormous palm tree, and falling rainbow specks that dance in the air like the light from a disco ball.

"Hello, it's so nice to see you again," comes Kim's prerecorded voice from inside the headset. "It's such a beautiful day today, isn't it?"

"Oh my goodness!" says Anderlini, sounding delighted. She turns her head slowly from side to side, taking in the details of the virtual landscape: little grass shacks, twists of driftwood, outcroppings of volcanic rock. "Hey, that's really pretty!" 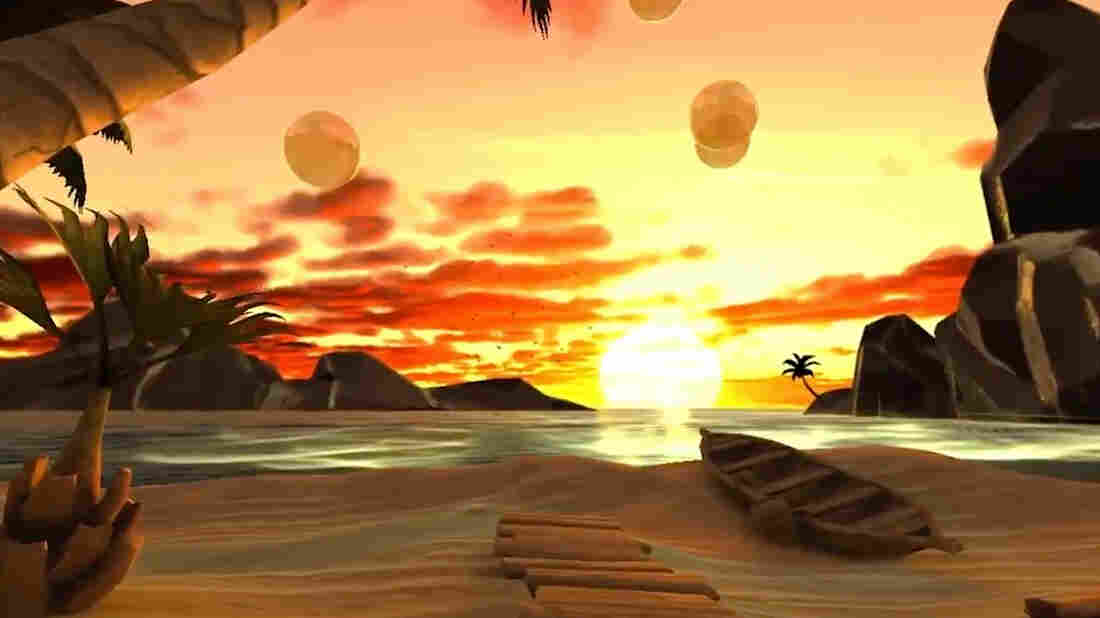 Aloha VR combines images of beaches with music, brief text and an audio introduction and welcome from the physician who helped create the program. Courtesy of One Caring Team hide caption 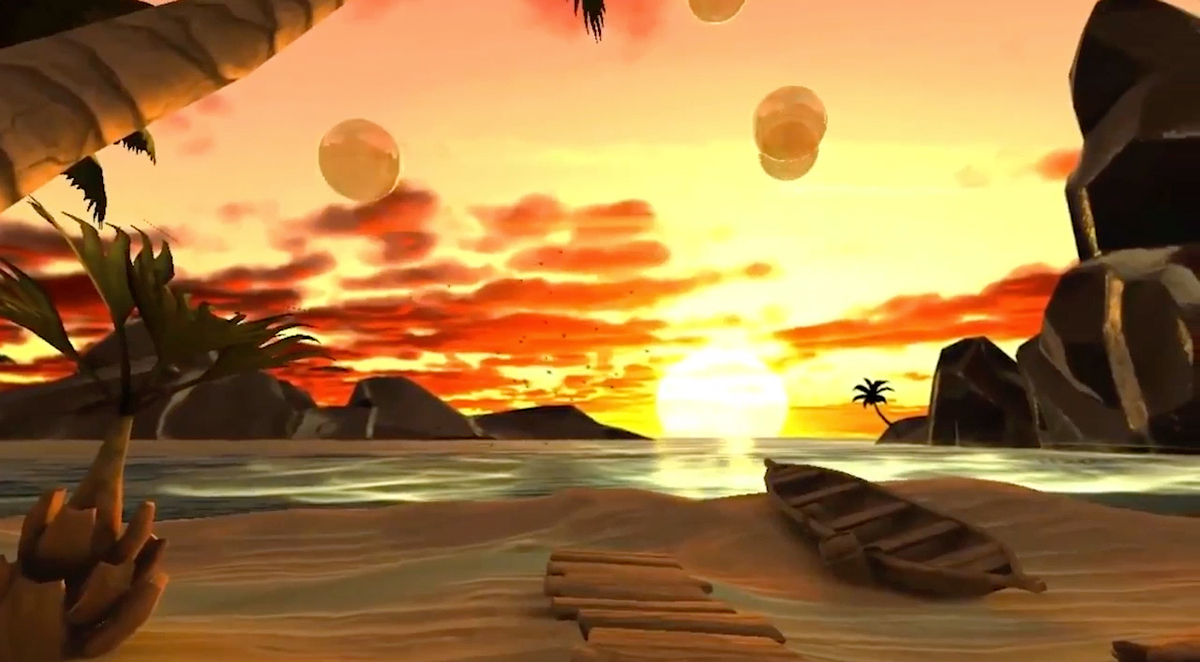 Aloha VR combines images of beaches with music, brief text and an audio introduction and welcome from the physician who helped create the program.

Courtesy of One Caring Team

"In the back, look at this," she continues, wriggling around to see the imaginary world behind her. "Terry, you've got to see this, too!" she calls to her son, who is watching nearby.

For a virtual reality entrepreneur, Kim has an unusual target audience: the elderly. Anderlini is the first private client for Kim's Aloha VR program, which Kim envisions as a way to help people relax, an alternative to endlessly watching TV and a change of scenery for those who can't get out much.

And for those unhappy in the present day, virtual reality might provide an escape into an immersive other world that "allows them to forget their chronic pain, anxiety, the fact that they are alone," Kim says. In VR, she says, her company has found "a new care modality to bring to a senior care setting like this, to inspire them to live another day, where they're happy."

'No One Cares About Me'

A former emergency room doctor, Kim found her way to virtual reality through a series of tough requests. A few years ago, she was running a house-call practice when she received a call for help from a woman whose 88-year-old mother had stopped eating and drinking. As a result, she'd made three trips to the ER in a month, racking up more than $50,000 in medical bills.

Kim knew that seniors often end up in the hospital for preventable conditions — like dehydration, malnutrition and electrolyte imbalances — exacerbated by loneliness and lack of self-care. And when she asked the older woman why she'd stopped eating, Kim recalls, her patient replied: " 'No one loves me. No one cares about me. I don't matter anymore. Why should I eat, why should I drink, why should I live? I just want to die today.' "

"When I was driving back home from that visit, I couldn't stop sobbing," Kim says. "As a single woman without any kids, I thought, when I'm her age, who's going to call me? Who's going to take care of me?"

That interaction led Kim to found One Caring Team in 2014. Staffers regularly phone seniors at home to check on their mood, medications and appointments, and prompt them to chat about positive subjects, like what makes them happy or what they could do to bring joy to someone else.

But then one day, as Kim was giving a talk about her service, a man in the audience asked: "What about my mom?" His mother has dementia, he said, and couldn't have a coherent phone conversation. Finding a solution for his mom, Kim says, became her "new homework assignment."

By chance, Kim had been reading about virtual reality and decided to attend a VR mixer in San Francisco; someone let her use an Oculus headset to walk through a virtual garden, and she "totally fell in love" with the medium. Convinced the older patients would like it, too, she borrowed a friend's headset and took it to a preventive care conference. By the time she was done, she already had directors of assisted-living facilities asking about pricing.

That convinced her that the concept could sell, but she wanted to make sure VR could actually make people feel better.

"There are over 100 clinical research papers that are already published that show proven positive clinical outcomes using VR in managing chronic pain, anxiety and depression," she says. "And in dementia patients, all those three elements are very common." 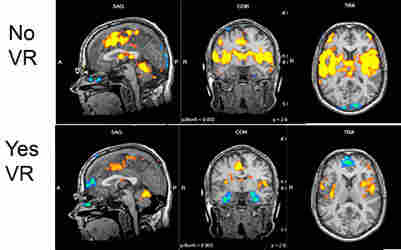 These images from an fMRI scan show areas of the brain affected by pain, and how those activated areas quieted down for one test patient who donned a headset that immersed the patient in a virtual reality world. Courtesy of Dr. Sam Sharar/University of Washington hide caption 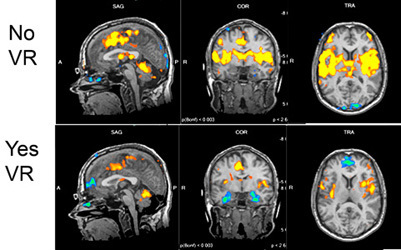 These images from an fMRI scan show areas of the brain affected by pain, and how those activated areas quieted down for one test patient who donned a headset that immersed the patient in a virtual reality world.

For example, in the 1990s, pioneering researchers at the University of Washington developed SnowWorld, an icy virtual environment that reduced pain for burn victims during wound treatment. More recently, Dr. Albert Rizzo's lab at the University of Southern California has helped military veterans who have post-traumatic stress disorder, by offering exposure therapy in virtual environments. The Veterans United Foundation has created virtual reality experiences of veterans' memorials, for vets who can't travel to see them. And scientists at the Chronic Pain Research Institute have tested a virtual meditative walk meant to help users manage pain and stress.

VR is typically formulated for younger users, and often asks them to play games, solve puzzles, master new information and move around energetically. But many of Kim's clients use wheelchairs; those with advanced dementia cannot read or follow verbal commands. Nearly all of them are unfamiliar with the conventions of virtual reality devices, which assume that the user knows to swivel his or her head to take in the 360-degree view, to move around to make the landscape scroll, or to tap objects to interact with them. Instead, many of Kim's clients go through entire sessions seated, heads cast down, hands folded in their laps. Sometimes her staff has to gently pivot clients' chins to help them look to the side.

But exploration and beating puzzles aren't the point of this kind of VR: The environments have no story-line, just scenery. Kim says the name Aloha VR is a nod to her experiences working in a Hawaiian emergency room, where she came to admire the state's "ohana spirit," a concept that encompasses love for extended family and respect for elders.

In the version of the VR program Anderlini is watching, Kim's voice offers a friendly welcome and reminds her to take her medication to stay healthy. As she speaks, the brief text pops up in little orange bubbles that burst pleasingly at the end of each sentence. Versions for the cognitively impaired have no words at all; just music and the sounds of waves.

Instead, the point is to make users feel safe and welcome. "Dementia patients often feel lost, because they feel that they don't belong anywhere," says Kim — they may be confused about their surroundings or who they are, or estranged from family members overwhelmed by their care. By giving them a beautiful beach, Kim said, "I want them to feel found again."

In addition to having private clients, Kim conducts group therapy sessions at Bay Area assisted-living centers, where a dozen or so people take turns with the goggles. Although some of her clients struggle with verbal communication, they seem to have found other ways to express enjoyment. One client, Kim said, simply blew kisses. Another hummed happily. A third stole 40 minutes in the headset, repeatedly asking for "Just a little more, hon." A few just go to sleep.

The Challenge: Heavy And Expensive Headsets

There are still challenges for the company to work out. The headsets can be heavy; it can take seniors a while to warm up to trying them. And while prices for mobile VR equipment have come down, it still costs about $850 for each Samsung Gear VR headset plus the Galaxy smartphone that slides into it — costly enough that the firm doesn't have a rig for each client.

Kim's company has created a handful of virtual environments for demonstration purposes, but it will take time and money to build more. So, for now, they also buy off-the-shelf programs to give the clients a little variety. (They recently teamed with the Virtual World Society, a group that intends to use VR to promote social good. The group's founder, the University of Washington's virtual interface pioneer Dr. Tom Furness, is now One Caring Team's acting chief technology officer.)

So far, Virginia Anderlini has taken virtual visits to Venice and Africa and, after her brief trip to the beach, spent some time in an autumn-themed meditation session watching leaves fall. But she's seen it before, and soon asks for something different. What virtual world would she like to try next? "Just something I haven't seen before," she says.

But that could be tougher than it sounds.

"You know, when you get to this age, I think you've seen everything," Anderlini says, and laughs.

This story was produced by KQED's health and technology blog, Future of You.