Accessibility links
A Community Takes On Caring For Strangers With Mental Illness : Shots - Health News Families struggle to find a safe, therapeutic place for loved ones with serious mental disorders. In Geel, Belgium, residents have brought mentally ill strangers into their homes for centuries.

For Centuries, A Small Town Has Embraced Strangers With Mental Illness

For Centuries, A Small Town Has Embraced Strangers With Mental Illness 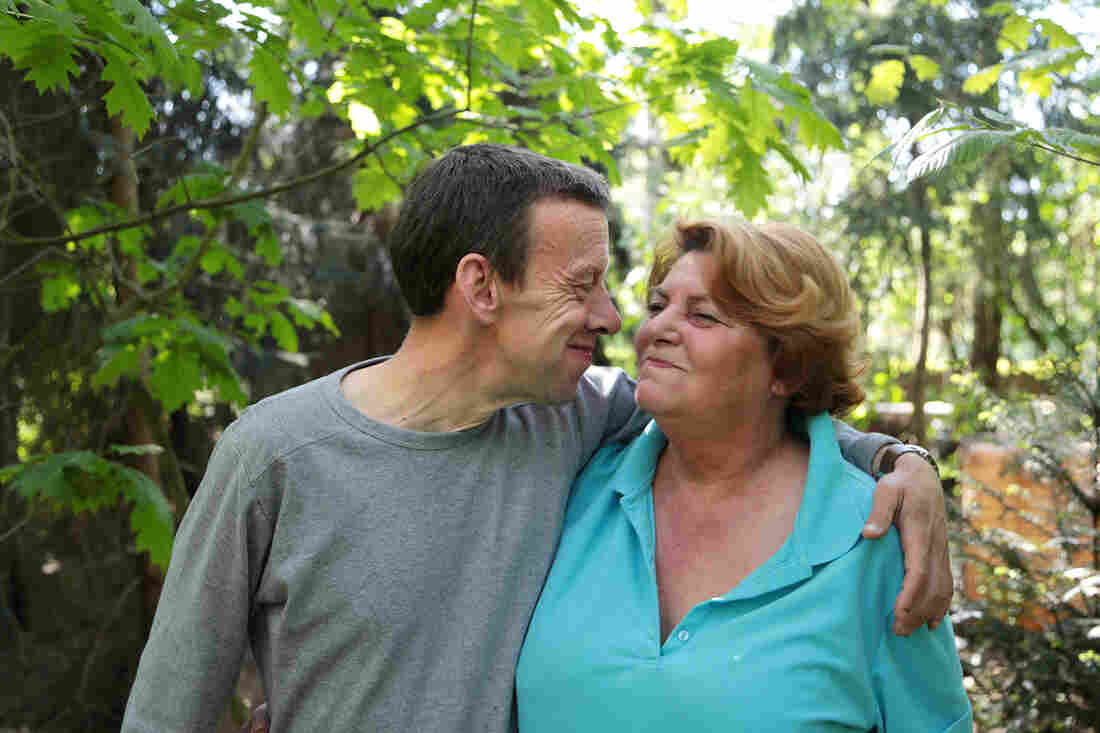 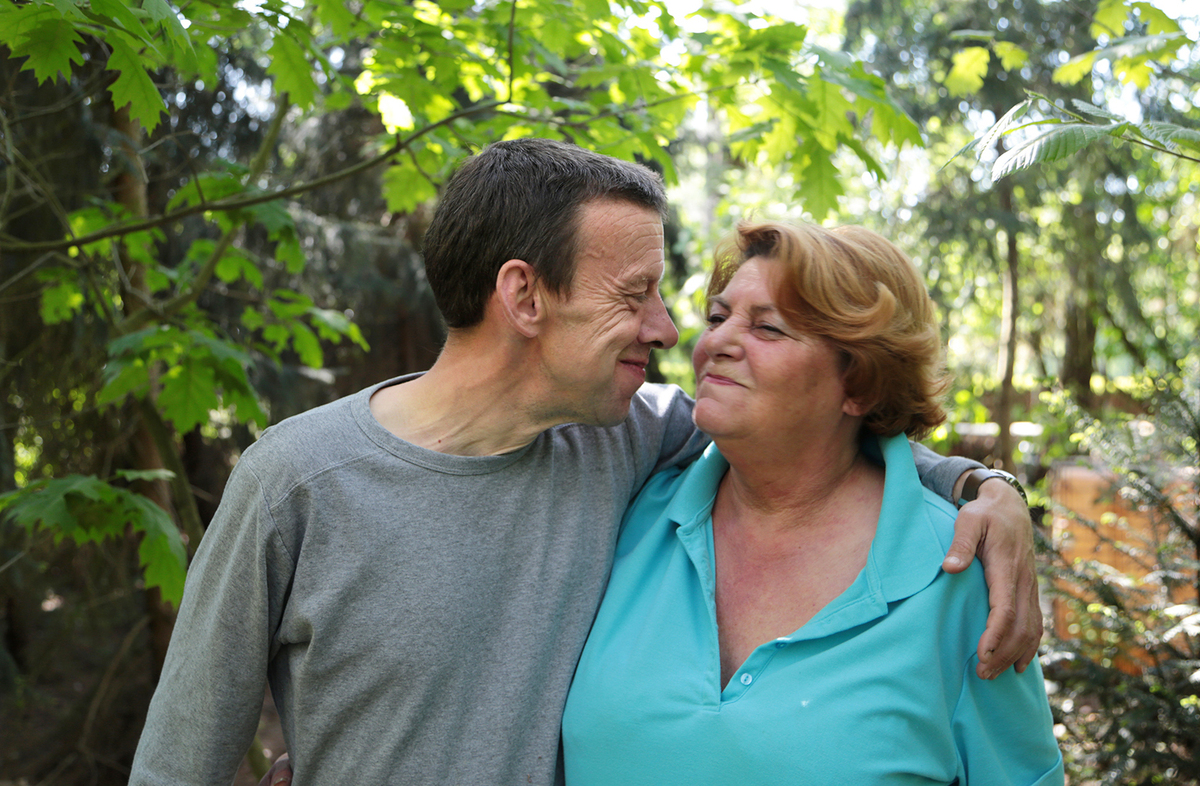 At the center of Geel, a charming Belgian town less than an hour's drive from of Antwerp, is a church dedicated to Dymphna, a saint believed to have the power to cure mental disorders. It's a medieval church with stone arches, spires and a half-built bell tower, and it has inspired an unusual centuries-old practice: For over 700 years, residents of Geel have been accepting people with mental disorders, often very severe mental disorders, into their homes and caring for them.

It isn't meant to be a treatment or therapy. The people are not called patients, but guests or boarders. They go to Geel and join households to share a life with people who can watch over them. Today, there are about 250 boarders in Geel. One of them is a Flemish man named Luc Ennekans. He's slim and has green eyes, and he's 51 years old. NPR's Lulu Miller went to Geel and met him and his host family there and reported this story for Invisibilia.

Like all of the guests in the town today, Ennekans first went to a public psychiatric hospital in Geel that manages the boarder program. Ennekans saw medical professionals and received treatment and an evaluation. Then he was paired with a household. His hosts, Toni Smit and Arthur Shouten, say that living with Ennekans was rough at the start.

Ennekans became deeply attached to Smit. "If it were up to Luc, he would be hugging and kissing me all day," Smit says. He showered her with such affection, bringing her flowers, little kisses, linking arms with her on walks, that it began to interfere with Smit and Shouten's marriage. "You couldn't even give each other a hug or Luc is standing behind us," Shouten says. Wrinkles like this are common, according to the couple. They've had six boarders over the years, each with a unique set of challenges.

One boarder used to lock Smit and Shouten out of the bathroom to furiously wash his hands, and another used to struggle to sleep because he saw lions coming out of the walls. "He was really dementing," Smit says. But that doesn't affect the way they see their boarders. Like many hosts in Geel, they accept that this is simply who their boarders are. It's not abnormal or something they need to change. "It's just normal life," Shouten says.

That acceptance of mental differences has become something of a tradition in Geel. It's at the heart of the boarder program, and some observers think it's also responsible for the system's success. Around the world, many different experiments have been attempted over the centuries to provide humane care for people with mental illness and mental disabilities. Geel is one that has endured.

Residents of Geel have not only accepted the eccentric or disruptive behaviors of the boarders but have come up with creative ways to help boarders and residents manage them, says Ellen Baxter, the founder of Broadway Housing Communities, a nonprofit in New York City. It is partially inspired by Geel, which Baxter visited as a young woman.

For example, when Ennekans became too jealous or attached to Smit, Shouten and Smit encouraged him to find a girlfriend or other companionship. When their former boarder hallucinated lions coming through the walls, Smit would pretend to chase the lions away. "And that would work every time," Smit says.

Shouten and Smit receive a stipend from the Belgian government for taking care of Ennekans, as well as training and support from psychiatric professionals. Hospitalization is available if needed. Several studies have found that the incidence of violence by boarders is low; people who have previously exhibited violent behavior are usually not admitted to the program.

The integration of people with mental disorders into Geel society has fascinated scholars for centuries. In 1862, Dr. Louiseau, a visiting French doctor, described it as "the extraordinary phenomenon presented at Geel of 400 insane persons moving freely about in the midst of a population which tolerates them without fear and without emotion." Nearly 100 years after that, an American psychiatrist named Charles D. Aring wrote in the journal JAMA, "The remarkable aspect of the Gheel experience, for the uninitiated[,] is the attitude of the citizenry."

Early psychiatrists who observed Geel noticed that the treatment prescribed for mental patients was, in fact, no treatment at all. "To them, treating the insane, meant to simply live with them, share their work, their distractions," Jacques-Joseph Moreau wrote in 1845. He and others advocated for that communion. "In a colony, like in Geel, the crazy people ... have not completely lost their dignity as reasonable human beings." In the next half-century, many would uphold Geel's model as the best standard of practice for mental disorders. 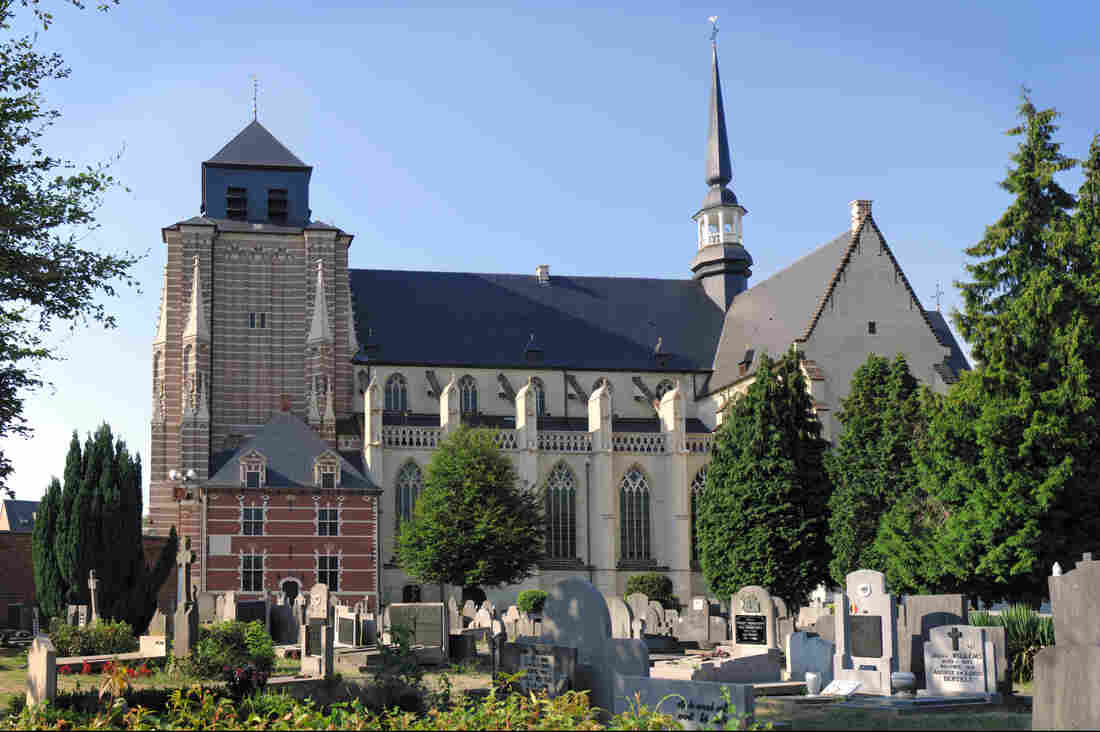 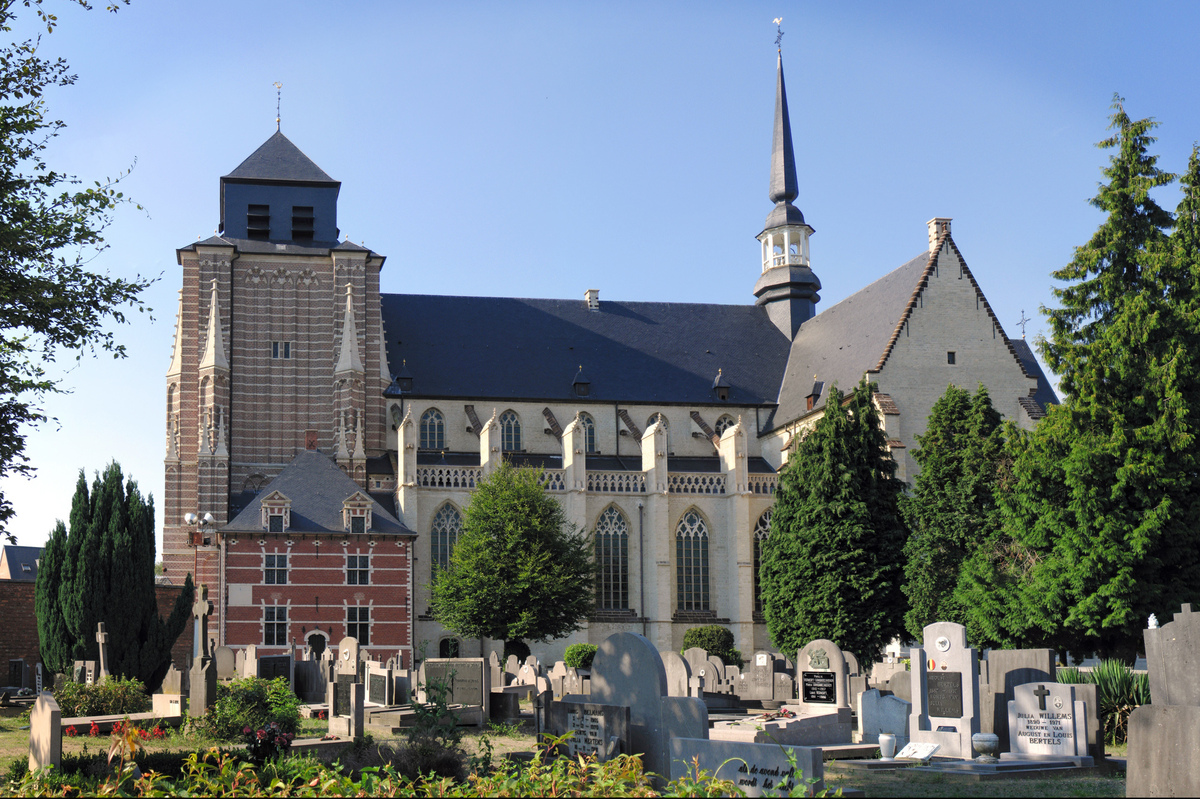 How Geel came to be this way begins with the town's devotion to St. Dymphna, whose church stands in the center of town. According to legend, Dymphna was a 7th-century Irish princess who fled to Geel from a maddened father and devoted her life to serving the mentally disabled. But she became a martyr when her father discovered her location and traveled to Geel to behead her.

The town built St. Dymphna's church in the 14th century to honor the saint and enshrine her supposed remains. It became a popular pilgrimage site for people across Europe, who would bring loved ones to the shrine in the hopes of finding relief from their mental distress. 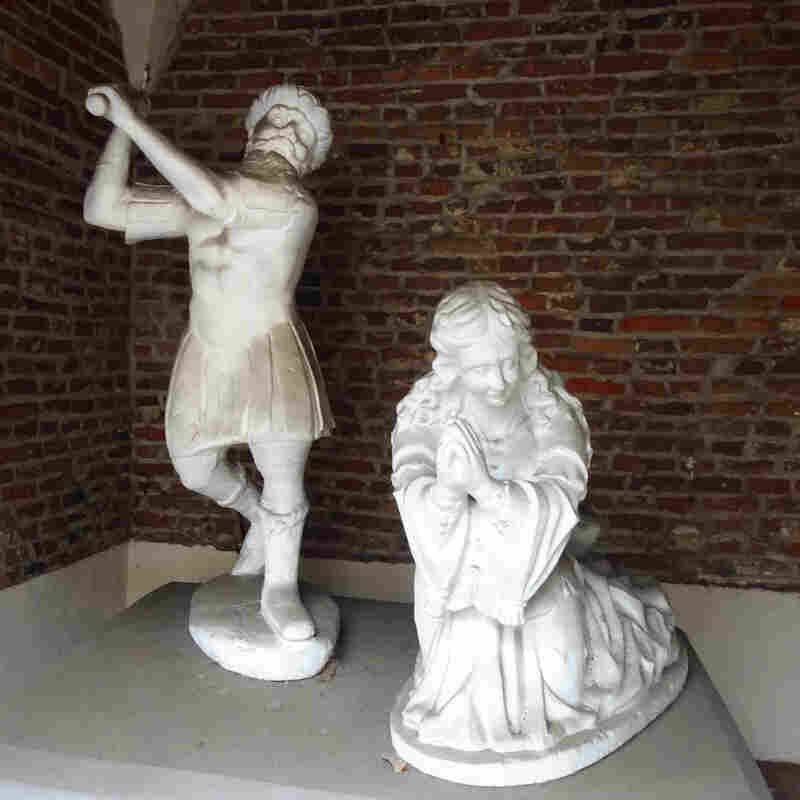 St. Dymphna is said to have fled to Geel from Ireland, where she helped care for people with mental illness. Courtesy of Eric de Smet hide caption 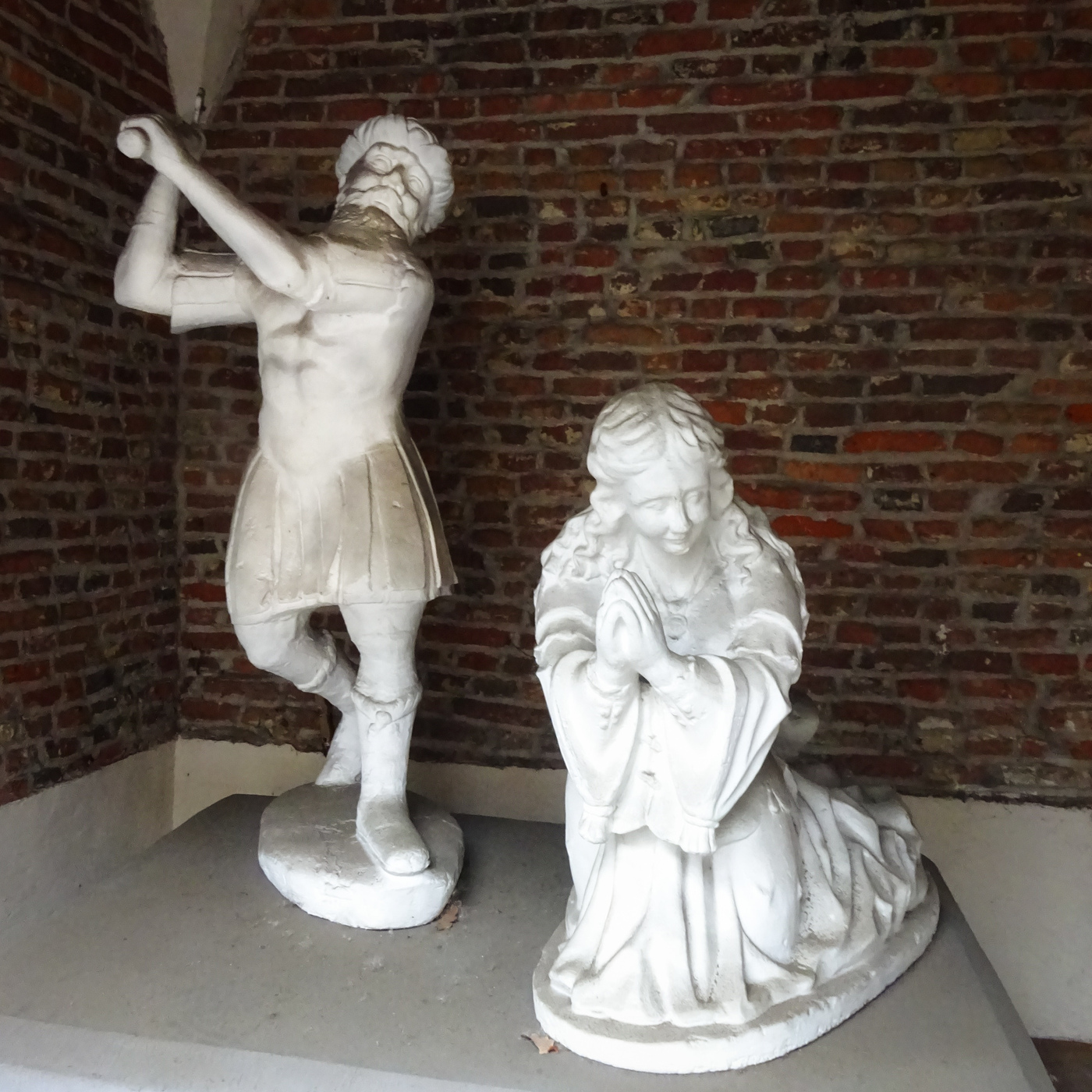 St. Dymphna is said to have fled to Geel from Ireland, where she helped care for people with mental illness.

By 1480, the town had built a small hospice on the side of the church to accommodate pilgrims, but the shrine became so popular that the pilgrims overwhelmed the annex's capacity. "Sometimes the families would return home and leave their uncured relatives in the hospice," says Mike Jay, a historian of psychiatry and curator for the Wellcome Collection in London, who has studied Geel. "So local people began taking them in as guests or boarders, as they call them."

The early practice was often mutually beneficial for both the hosts and the boarders, Jay says. Many Geel residents were farmers, and boarders offered a source of labor. In exchange, the boarders got stable housing and a family life. But the integration was not always a happy one. There are stories of abuse, Jay says. "One of the laws was that if a boarder committed a crime, it was the fault of the family. If you had a boarder who was difficult, then some of the families would resort to keeping them chained or restrained."

As medical treatment for the mentally ill evolved, so did Geel. In the 19th century, a central medical establishment was set up that provided standard medical and psychiatric care to boarders and other residents. But this was at the same time that large insane asylums were considered the most advanced, scientific form of care. Geel became the source of a great debate in psychiatry. "It was a polarizing example," Jay says. "Some people regarded Geel as a sad remnant of old medieval culture where people were left to toil in the field and never given therapy and no chance of recovery."

Other early observers noted the same things that Baxter and other more recent visitors have: By and large, people in Geel were happy. "One of the agreeable features is the general contentment manifested by the insane," wrote John Sibbald, a Scottish psychiatrist, in 1861.

By the turn of the 20th century, the International Congress of Psychiatry had declared Geel an example of best practice to be copied elsewhere. The program continued to be a source of local pride, and it grew. At the program's peak in 1930, about 4,000 boarders resided in Geel — a quarter of the town's population.

Over time, Jay says, boarders had become such a part of life and society that distinctions between them and nonboarders blurred. And with that, "a lot of the problems we associate [with mental illness] kind of fade away," Jay says. "Like trying to navigate a world full of kind of normal people who don't understand what's going on and aren't tolerant towards it."

There are a few important criteria for acceptance into the Geel program. The program typically selects patients with severe mental illness or cognitive disabilities who have difficulty living independently. In 2003, almost half of the town's 516 boarders had a cognitive disability, and over 20 percent carry a diagnosis of schizophrenia or other psychotic disorder, according to research by Jackie Goldstein, a professor emeritus of psychology at Samford University. Some boarders have traditionally had other conditions such as learning disabilities or autism.

While scholarship of Geel is rich with observation, there remain few long-term, empirical studies on how these patients do in the system. "The successes and shortcomings of Geel's system of foster family care had never been thoroughly or systematically examined," Goldstein noted in a speech presented at the American Psychological Association Annual Convention in 1998. In the 1960s, researchers embarked on a 10-year project studying Geel that Goldstein took part in, but it never reached completion.

Goldstein continued studying Geel throughout her life, and some of her work shows that boarder life is stable. Boarders tend to stay in family care for years. In some cases, when boarders' caretakers grow too old or die, they continue to live with their caretakers' children. In 2005, nearly a third of boarders lived in a foster home for more than 50 years.

But the centuries-old custom has been shrinking. The number of boarders has fallen to roughly 250 today, less than 7 percent of its prewar peak. Eugeen Roosens, a Belgian psychiatrist, and Lieve Van De Walle, a former director for rehabilitation in Geel, write, "the time of extended farmer families, who could do with a helping hand, is gone," in their book, Geel Revisited: After Centuries of Mental Rehabilitation.

There are possible reasons for the program's decline besides the time and professional pressures of modern life. There may be fewer patients who need supported living thanks to improved psychiatric medication, which might contribute to fewer referrals to the program. Roosens and Van De Walle also note the program lacks enough funding to cover the cost of a boarder. The Belgian government pays 40 euros (less than $45) per boarder per day to support the practice, less than half of which goes to the foster family to cover living expenses.

Still, the tradition persists, in large part because Geelians are proud of it. In a 1962 survey of Geel foster families, American psychiatrist Matthew Dumont found that their main reason for accepting boarders was custom. Roosens and Van De Walle describe the program as part of Geel's heritage. It's part of the town's identity. But, they write, that may not be enough to sustain the program.

Invisibilia co-host Lulu Miller contributed to this report. For more on experiments in community-based housing and support, see our story on Mr. Kitt, a man who lived on the streets of New York City for decades before finding a home, health and art at Broadway Housing Communities.