Accessibility links
Episiotomies Don't Help Moms Or Babies In Most Cases, But Remain Common : Shots - Health News Overall rates of the surgical snip have declined nationally in the past decade. But, despite advice, some hospitals and certain doctors still routinely cut the vagina to ease a baby's birth. 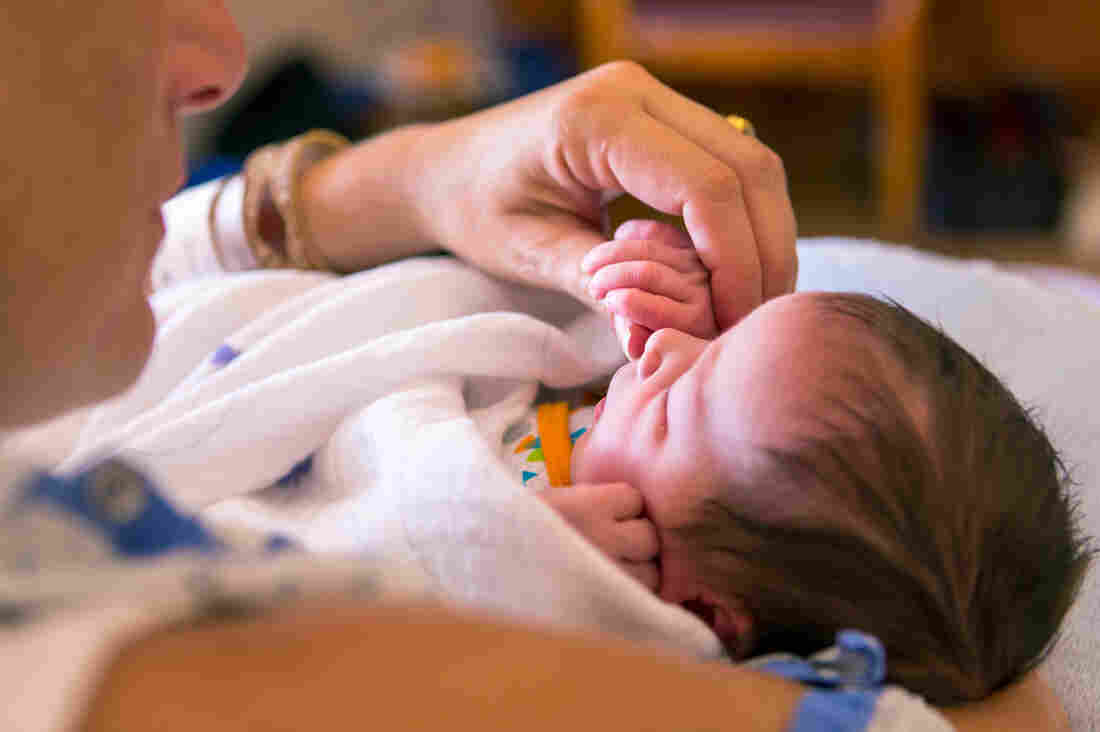 Women go through a lot in the delivery of a healthy baby. But in most cases, doctors say, an episiotomy needn't be part of the experience. Marc Romanelli/Blend Images/Getty Images hide caption 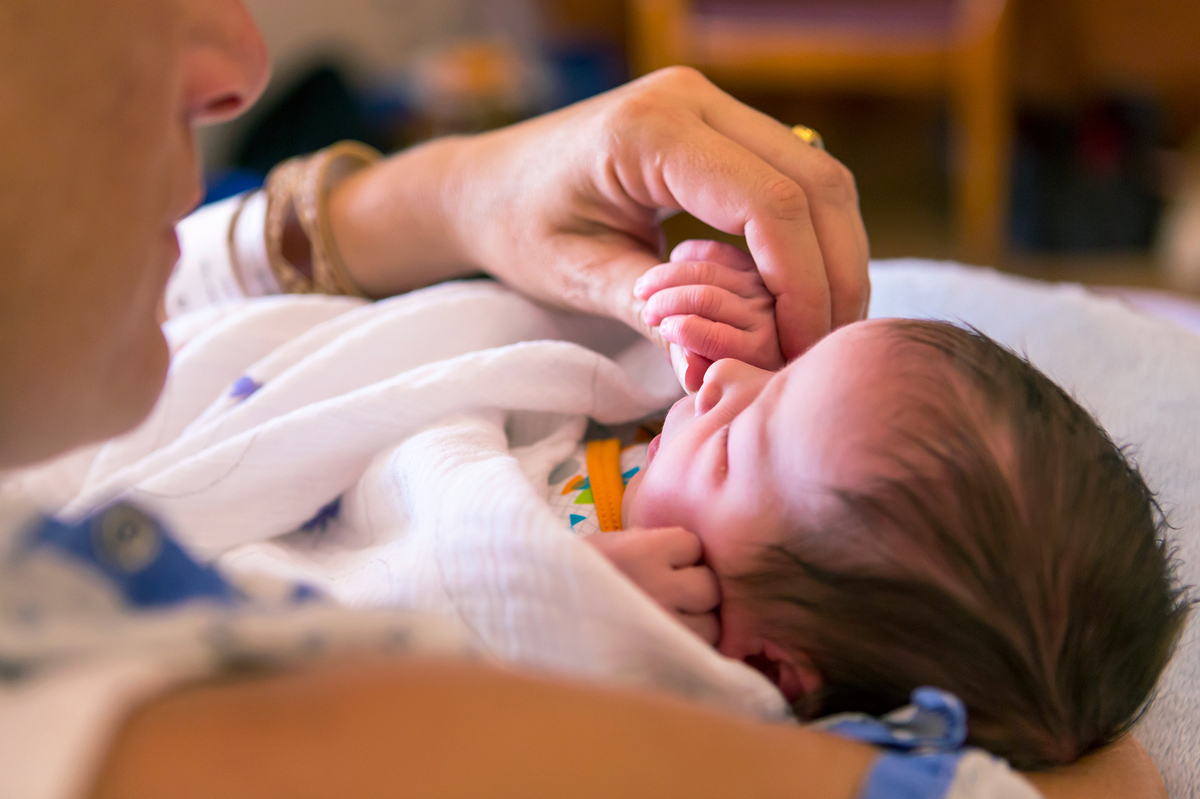 Women go through a lot in the delivery of a healthy baby. But in most cases, doctors say, an episiotomy needn't be part of the experience.

Episiotomy, a once-routine surgical incision made in a woman's vaginal opening during childbirth to speed the baby's passage, has been officially discouraged for at least a decade by the leading association of obstetrician-gynecologists in the United States.

Nonetheless, despite evidence that the procedure is only rarely necessary, and in some cases leads to serious pain and injuries to the mother, it is still being performed at much higher than recommended rates by certain doctors and in certain hospitals.

In one recent case, Kimberly Turbin, a 29-year-old dental assistant who lives in Stockton, Calif., is suing her former obstetrician for assault and battery after he performed an episiotomy on her in 2013. A video of the birth, with Turbin begging the doctor not to cut her, has been viewed more than 420,000 times.

Average Age Of First-Time Moms Keeps Climbing In The U.S.

Since then, the use of this surgical incision has dropped significantly — from 21 percent of all vaginal births in California in 2005, for example, to fewer than 12 percent in 2014. National trends have been similar.

But that overall drop masks some giant disparities. While the majority of California's hospitals now have episiotomy rates under 10 percent, according to state data, the technique's use at individual hospitals can be five or six times as high.

Dr. Alexander Friedman, an assistant clinical professor of obstetrics and gynecology at Columbia University Medical Center in New York City, who has studied the issue, says sky-high rates at some institutions are surely based on factors that go beyond medical need.

"If you perform an episiotomy, you're more likely than not going to cause more postpartum pain and discomfort," says Friedman, who was lead author of a 2015 report, published in JAMA, the Journal of the American Medical Association, about the variation in episiotomy rates among hospitals nationally. While the ideal rate of episiotomy is unknown, he says, it should likely be less than 10 percent.

As recently as the late 1970s, episiotomy was used in more than 60 percent of vaginal deliveries across the U.S. because doctors believed a clean incision helped prevent tears between the vagina and rectum, that a clean cut was easier to stitch than a tear, and that the incision prevented overstretching of the muscles surrounding the vagina.

In the past few decades, though, research has shown that the cuts sometimes cause serious pain and injuries, including deep tissue tears, incontinence and sexual dysfunction. The repaired incisions often prove slower to heal than a natural tear.

Armed with this information, many pregnant women started refusing the procedure, and most obstetricians stopped doing it routinely.

But certain doctors are going against that trend.

Dr. Emiliano Chavira, a maternal and fetal medicine specialist at Dignity Health's California Hospital Medical Center in Los Angeles, says he suspects three main reasons why some providers continue to perform routine episiotomies: They've always done them; they lack awareness of best practices; or they want to speed up deliveries.

"Certain segments of the obstetric community are very slow to modernize the practice," Chavira says. "They're very slow to abandon procedures that are not a benefit and, in fact, may be harmful. And it's really disappointing."

There can also be great variation from hospital to nearby hospital, research shows.

For example, in Los Angeles each of the six hospitals owned by AHMC Healthcare have continued to do episiotomies in more than 29 percent of vaginal births, according to state data. And two of the institutions — Garfield Medical Center in Monterey Park and Whittier Hospital Medical Center in the city of Whittier — have episiotomy rates close to 60 percent. Representatives of the chain and its hospitals didn't return repeated calls and emails requesting comment.

Meanwhile, Kaiser hospitals in Northern California have seen huge reductions in the use of the procedure since the Oakland-based managed care organization undertook an intentional effort to address overuse.

Dr. Tracy Flanagan, director of women's health and maternity at Kaiser Permanente in Northern California, says her office began examining episiotomy rates at different hospitals four or five years ago. They first looked at rates at the hospital level, then at the physician level, she says, and found " a lot of variation."

They first sent the data to the individual hospitals. Then, doctors at each hospital who rarely performed episiotomies were asked to educate their colleagues about the appropriate use and relative risks of the procedure.

Physicians tend to respond best if other physicians present them with a compelling argument to change their ways, Flanagan says. Reliable data, transparency and peer-to-peer education, she adds, is a good recipe for narrowing variation.

The average episiotomy rate for the Northern California Kaiser hospitals is now about 3 percent, Flanagan says.

Zero percent would be too low, she adds; in some cases — if a baby's shoulder is stuck, for instance, or the infant's heart rate drops, or if the mother is exhausted and wants an episiotomy — the procedure's use is warranted.

Dr. Elliott Main, medical director of the California Maternal Quality Care Collaborative and a clinical OB-GYN professor at Stanford University, says the episiotomy data offer a lesson in how quickly practices can change. This evidence also highlights the hospitals where doctors refuse to alter their ways, he says.

In the case of C-sections, doctors may be motivated to perform the procedures because they allow for faster deliveries or better pay, Main says. But the main reason some doctors still perform too many episiotomies is probably that they always have done so — in some cases for decades.

"It is always hard for people to relearn," Main says.

His organization is leading an effort to provide doctors and hospitals with data on certain childbirth practices, to show them how they compare with their peers around the state. Beginning in 2010, the group partnered with the March of Dimes to educate providers about the dangers of elective delivery prior to 39 weeks. Within three years, that practice had dropped off rapidly, he says. The organization is currently undertaking similar efforts related to C-sections.

Chavira, the maternal and fetal medicine specialist at California Hospital in Los Angeles, says he would like to see similar transparency with data on episiotomies.

A lot of women don't want the procedure, Chavira notes, and doctors are supposed to honor their patients' wishes.

In June, a Superior Court judge in Los Angeles County ruled that Turbin's lawsuit against her former obstetrician can go to trial in the fall. Meanwhile, Turbin says she is terrified of getting pregnant again.

"If I go back to that day, there's nothing I could have done," she says. "That doctor was going to cut me, no matter what."

Kaiser Health News is an editorially independent news service that is part of the nonpartisan Henry J. Kaiser Family Foundation. (Kaiser Permanente has no relationship with Kaiser Health News.)