Accessibility links
People Go To Work Sick, Even When They Shouldn't : Shots - Health News An NPR poll found that most working adults say they go to work when they're sick. For people who work in hospitals or restaurants that can be a problem, since it's easy to spread disease.

The Workplace And Your Health 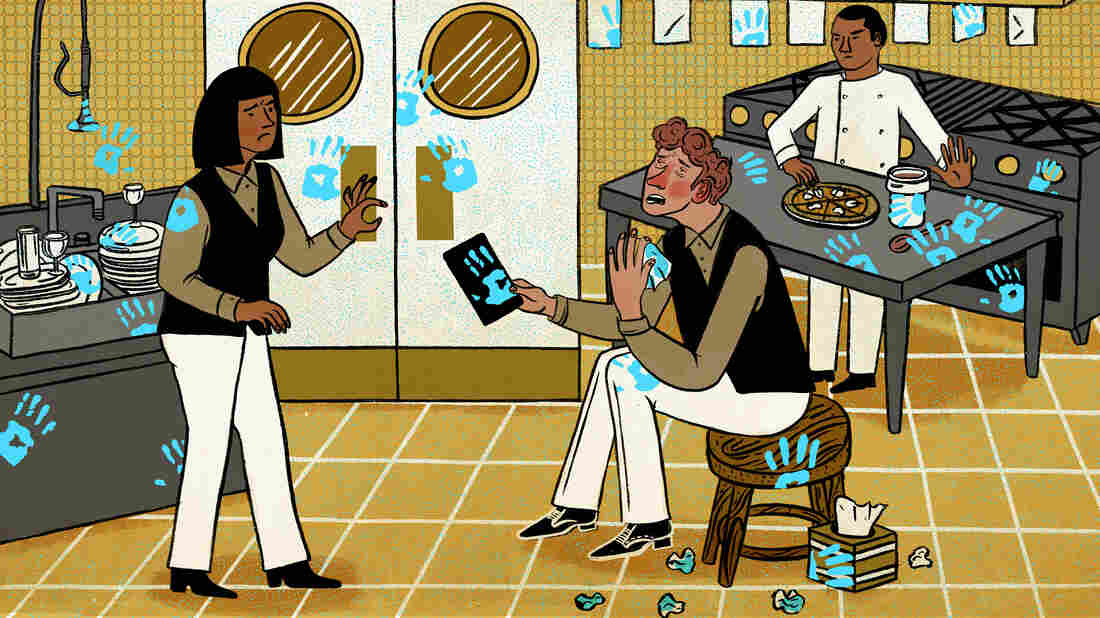 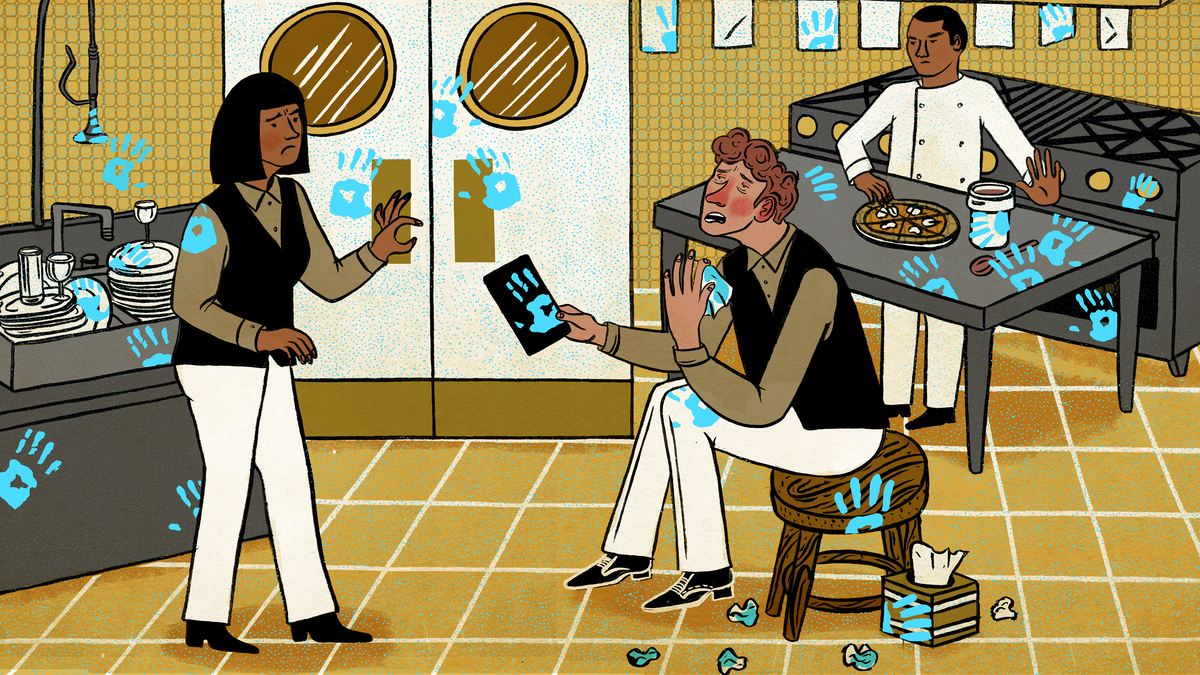 A majority of working adults say they still go to work when they have a cold or the flu. There are some jobs where doing that can have a big effect on health.

At least half of people who work in very public places, like hospitals and restaurants, report going to work when they have a cold or the flu. Those were among the findings of a poll conducted by NPR, the Robert Wood Johnson Foundation and the Harvard T.H. Chan School of Public Health.

They are some of the last people you'd want to go to work sick, because they tend to have a lot of contact with people. And that helps spread disease.

"It's one of the biggest food safety problems that there is, and we've known about it forever," says Kirk Smith, who oversees foodborne outbreak investigations with the Minnesota Department of Health. But he says it's really hard to get people to stop doing it.

When it comes to food handling, there's one illness that's particularly concerning: norovirus. "It is by far the most common cause of foodborne illness," says Smith. According to the Centers for Disease Control and Prevention, the virus is responsible for 35 percent of them.

That's because there are billions of virus particles per gram in stool and vomit. It only takes about 20 of those to get someone sick. And norovirus can hitchhike from surface to surface. It takes a high concentration of bleach to kill it.

"And so it just takes microcontamination of your hands, if you don't do a perfect job washing, to be able to contaminate food with enough of the virus to infect lots and lots of people," says Smith.

The same virus has plagued restaurant customers across the country. Last winter, 140 people — including much of the Boston College basketball team — got sick from eating at a Chipotle in Boston where one person had gone to work sick.

"It's definitely the norm to go into work sick. That's what I and most of my co-workers usually do," says Anthony Peeples. He used to work at an Olive Garden restaurant. Now he's a bartender at a casino in Michigan City, Ind. 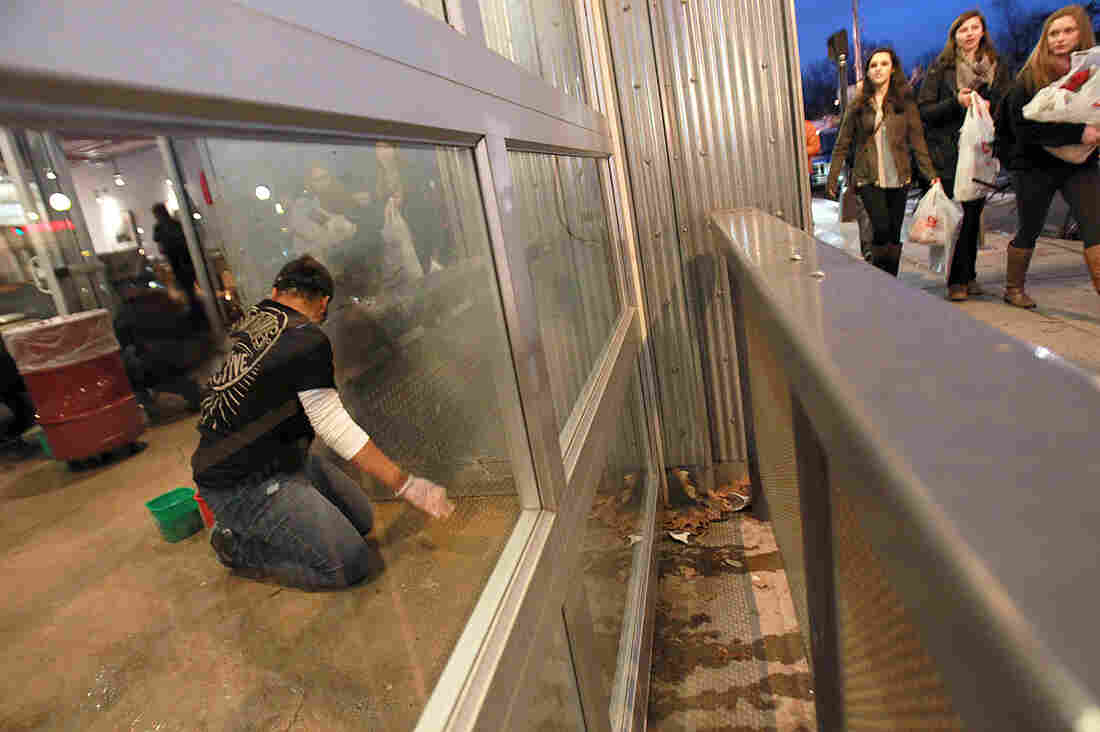 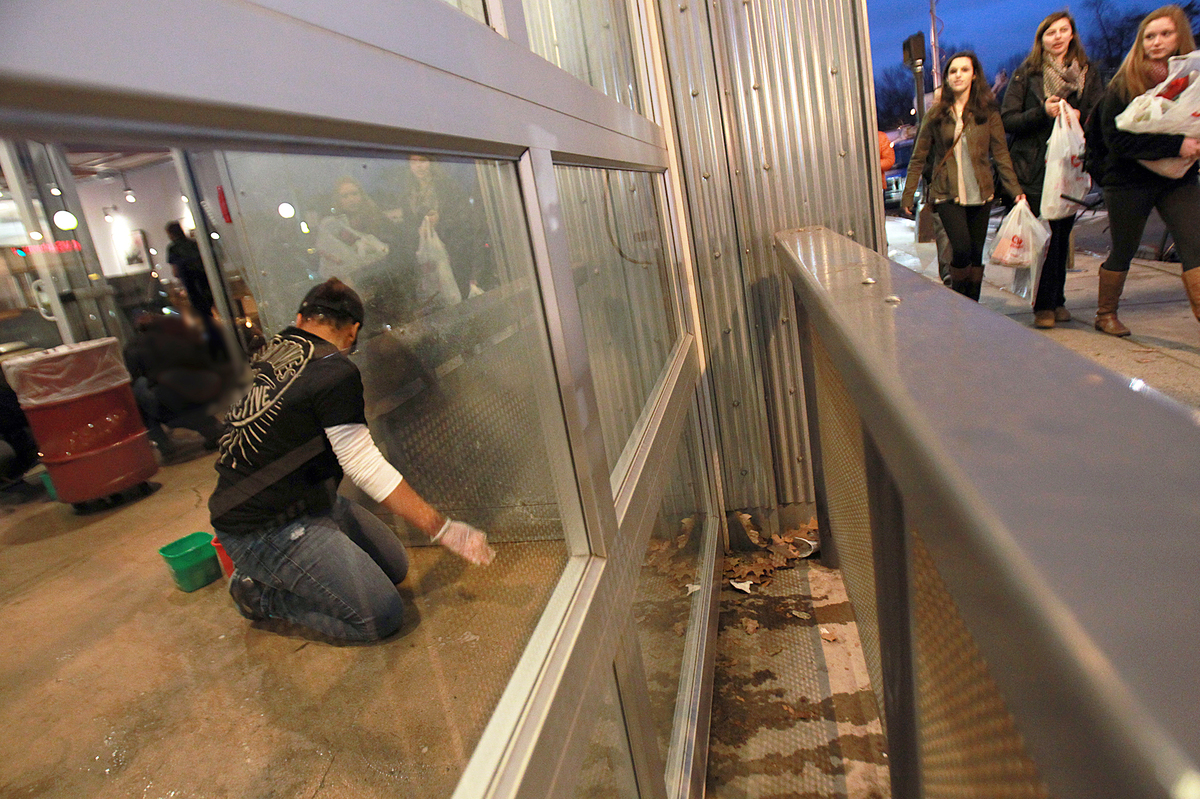 Workers clean a closed Chipotle restaurant in Boston in December after customers became infected with norovirus.

At Olive Garden, he says, he was in a bind when he got sick, because he didn't have any paid sick leave.

"I don't think anybody really wants to go out there and get people sick or let alone work when they're miserable, but you have to," he says, "Or else you're not going to be able to pay your electricity or water or your rent."

The Food and Drug Administration has something called the Food Code that says food workers need to stay home 24 hours after their symptoms go away, but not all states have adopted the rule.

The CDC has found that 1 in 5 food service workers has reported working while sick with vomiting and diarrhea.

People don't want to leave their colleagues in the lurch, says Laura Brown, a behavioral scientist with the CDC's National Center for Environmental Health.

She and her colleagues interviewed employees at about 500 restaurants in nine different states and then calculated which factors were most strongly linked to people going to work sick.

"Forty percent of workers did say to us that they'd worked while sick in the past because they wouldn't get paid," Brown says. "But when we look at the data statistically, that doesn't really seem to be a large driving factor in whether or not people actually work when they're sick."

A lot of them went to work because they were worried about losing their jobs if they didn't show. And there was another thing. "We found that workers who were concerned about leaving their co-workers short-staffed were more likely to say they'd worked while sick," Brown says.

Likewise, those who worked in places that had backup options — like on-call workers to fill in for sick staff — were less likely to work while sick. So the biggest factor, Brown says, was that "the workers are concerned about their co-workers having to work a man down."

NPR's poll also found that it isn't always money that drives people to work when they should stay home.