Accessibility links
How To Reduce The Pain And Anxiety of Vaccinations : Shots - Health News There are plenty of proven techniques that can help parents soothe the sting of the needle. And guess what? A parent's attitude can matter more than the actual pain of the shot.

Parents Can Help Reduce Pain And Anxiety From Vaccinations

Parents Can Help Reduce Pain And Anxiety From Vaccinations 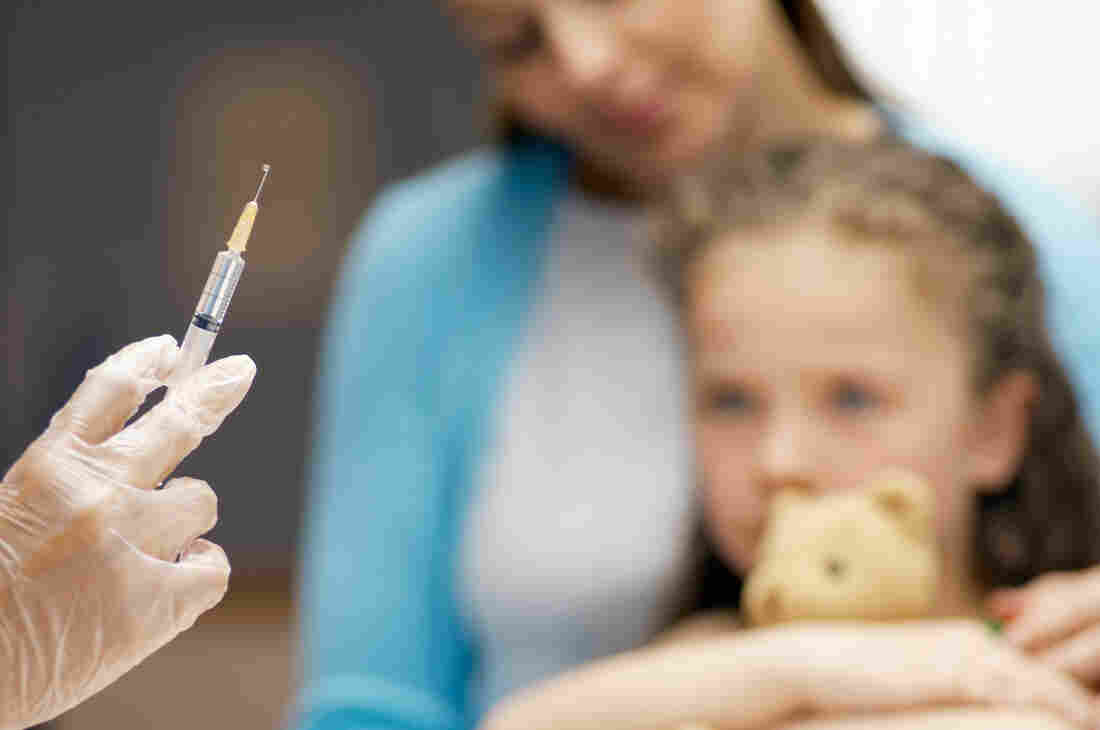 If you're worried, they're worried. Staying calm is one of many techniques parents can use to reduce pain and anxiety about shots. Fuse/Getty Images hide caption 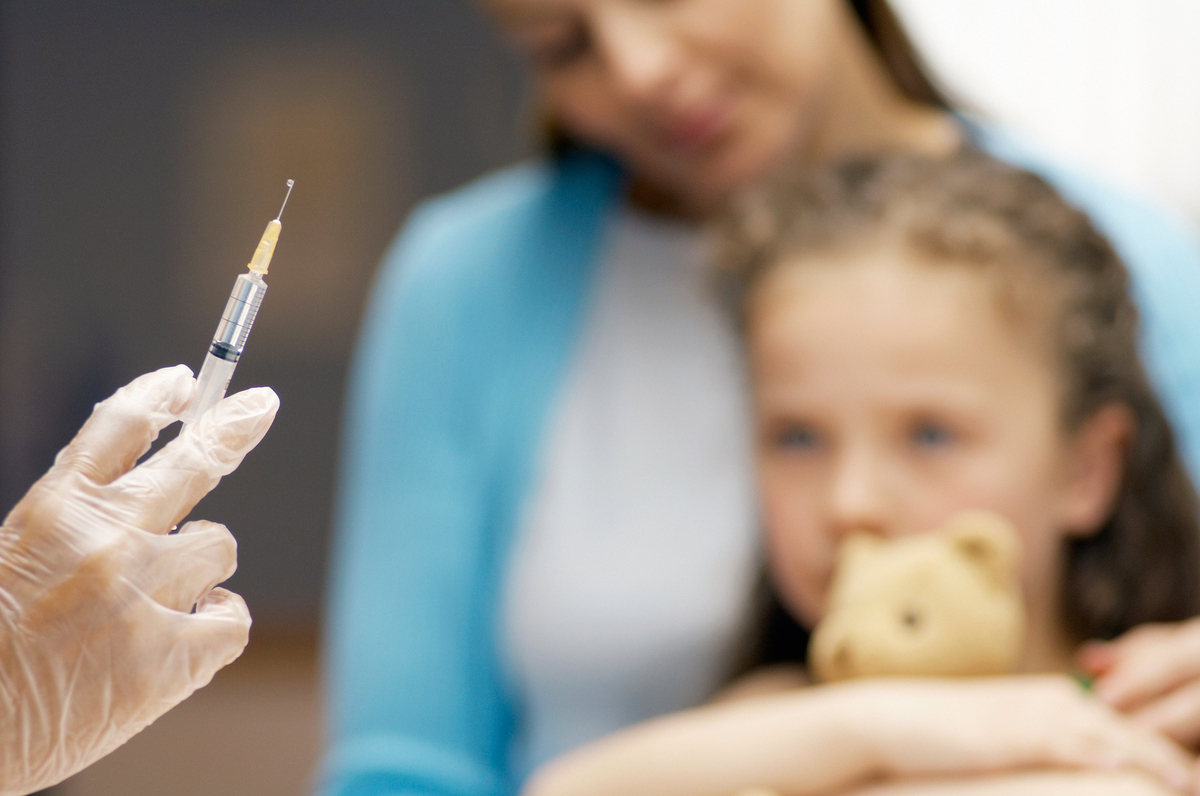 If you're worried, they're worried. Staying calm is one of many techniques parents can use to reduce pain and anxiety about shots.

Now that the nasal spray FluMist is no longer considered an effective vaccine against influenza, parents will have to resort to the old, unpopular standby for their kids: a shot.

It's not unusual for a child to have as many as 20 vaccinations by age 5 — all typically administered by injection. The pain of those shots can sometimes be a barrier to getting kids vaccinated, but several studies have shown that the pokes don't have to be so painful or petrifying, and parents can actually play a big role in soothing the sting.

"There is a whole body of research on children's pain management that people aren't aware of," Christine Chambers, a clinical psychologist and professor whose lab is based at the Centre for Pediatric Pain Research in Halifax, Nova Scotia, tells Shots. "Parents assume that everything possible is already being done — that if there was something more, it would be offered."

"In theory, every health professional would be offering these strategies, but we know physicians aren't very well trained when it comes to pain," says Chambers.

Chambers is trying to spread awareness of vaccine pain-management techniques via blogs, videos and social media sites. Together with Erica Ehm, publisher of YummyMummyClub, a Canadian online forum for moms, Chambers has launched a social-media campaign called "It Doesn't Have to Hurt," which aims to quickly give parents science-backed information on how to help kids better cope with vaccination pain.

Parents need to be honest with their kids about the fact that they're going to get a shot, says Chambers. But telling them too far in advance gives them more time to worry.

Rebecca Pillai Riddell, research chair of pain and mental health at Toronto's York University, suggests telling your child on the morning of the shot. "When they're waking up, getting dressed and eating breakfast, talk about what's coming up. Make it about the next event: 'We're going to go for ice cream afterward.' It helps them focus beyond the vaccination," she says.

When it's time to actually get the vaccination, the most important thing parents can do is remain calm themselves. This can be difficult, as research has shown that nearly a quarter of adults fear needles. When parents are anxious, kids pick up on that right away.

According to a study co-authored by Riddell and published earlier this year in the journal Pain, it is the parent's behavior rather than the actual pain level of the shot that increases a child's anxiety in the vaccination room.

And worse, says Riddell, babies who show distress before a vaccination exhibit more post-needle pain, which is measured by signs such as facial expressions, crying, heart rate and blood pressure.

"When kids are riled up, it makes them more reactive," she says.

Too many verbal assurances have repeatedly been shown in studies to cause higher distress, says Riddell. "When things are OK, parents don't go walking down the street reminding kids that things are OK," she says.

A child's position during the shot can also help set the tone of the experience. Chambers says physicians or nurses can prompt parents to hold kids in a way that's more like being hugged and less like being restrained. Letting your child remain upright establishes a sense of control and decreases fear.

In babies, skin-to-skin contact, and breastfeeding or pacifiers have been shown in multiple studies to stabilize heart rates, improve oxygen levels and decrease crying during painful medical procedures.

Parents can also try using an over-the-counter topical skin-numbing cream on their kids, making sure to give it time to take effect (this varies depending on which anesthetic you are using.)

Sugar water can provide some relief from pain, though possibly more because it's a pleasure that compensates for the pain rather than an analgesic that relieves it. Health professionals recommend giving a child sugar water before the shot and, if receiving multiple shots, throughout the entire process.

Older kids can also try the "cough trick." Coughing once before and once during routine vaccinations helped reduce painful reactions among children receiving their prekindergarten vaccines as well as in those getting shots before middle school, according to a 2010 study published in the journal Pediatrics. Coughing provides a distraction, and the sensory stimuli of the sound and feeling may compete with the pain.

Immediately after the shot, try distraction, suggests Riddell. Let your child play with a favorite handheld video game, watch a cartoon, hug a stuffed animal or sing a song. Blowing a few bubbles might also be helpful, since they're both distracting and relaxing, says Chambers.

Finally, don't dwell on the shot once it's over. "It's best to emphasize what went well, and then move to the next thing," she says.

Laurel Dalrymple is a freelance health and science writer based in Fairfax, Va. She's on Twitter: @ldal