When Mario Oikonomides was 38 years old he had a massive heart attack. About a month later, after he'd recuperated from the emergency, his doctors sent him to a cardiac rehabilitation program, where he learned about the role physical activity can play in reducing cardiac risk.

"I never exercised before," Oikonomides says. "I became addicted to exercising." The program, overseen by a medical team, also checked up on his medications, provided nutrition counseling and offered other help and coaching in the fraught weeks and months after his hospitalization.

Oikonomides is 69 now and lives in Charlottesville, Va. When he recently needed bypass surgery, long decades after that heart attack, he again signed up for a rehabilitation program as soon as he could.

"I bought myself 30 years of healthy life as a result of cardiac rehab," he says.

But, despite many years of research showing that joining a cardiac rehabilitation program can help heart patients heal faster and even live longer, Oikonomides is among a minority of patients who take advantage of such programs; fewer than a third do.

Why is rehab such a hard sell? Blame it on a number of factors, doctors say.

Some patients have to travel a long way to the nearest program; work schedules keep others from joining. Uninsured patients often can't afford it. And even those with insurance can be stopped short by copayments that can be $20, $40 — or even $50 a class.

"The number one barrier is the cost of the copay, which is frustrating," says Dr. Ellen Keeley, a cardiologist at the University of Virginia Health System.

These days, Medicare and most private insurers cover cardiac rehab for patients who have had heart attacks, coronary bypass surgery, or who have had stents implanted or received a diagnosis of heart failure or any of several other conditions. Most plans cover two or three hour-long visits per week — up to 36 sessions. With most programs encouraging patients to participate two or three days a week, the cost of copayments can add up fast.

Courtney Conners is an exercise physiologist at U.Va. who meets with patients after a heart attack. The U.Va. clinic, started by Keeley about a year ago, contacts patients before they are discharged and brings them back to the clinic a week or 10 days later to meet one-on-one with a nutritionist, pharmacist, cardiologist and exercise physiologist to develop a tailored rehab program.

"There's a little hesitance, where they're like, 'I don't really want to come. I don't know if I want to go three days a week,'" Conners says of the exercise program. "And then their wife, or one of their family members will push them, and then they'll agree to sign up." 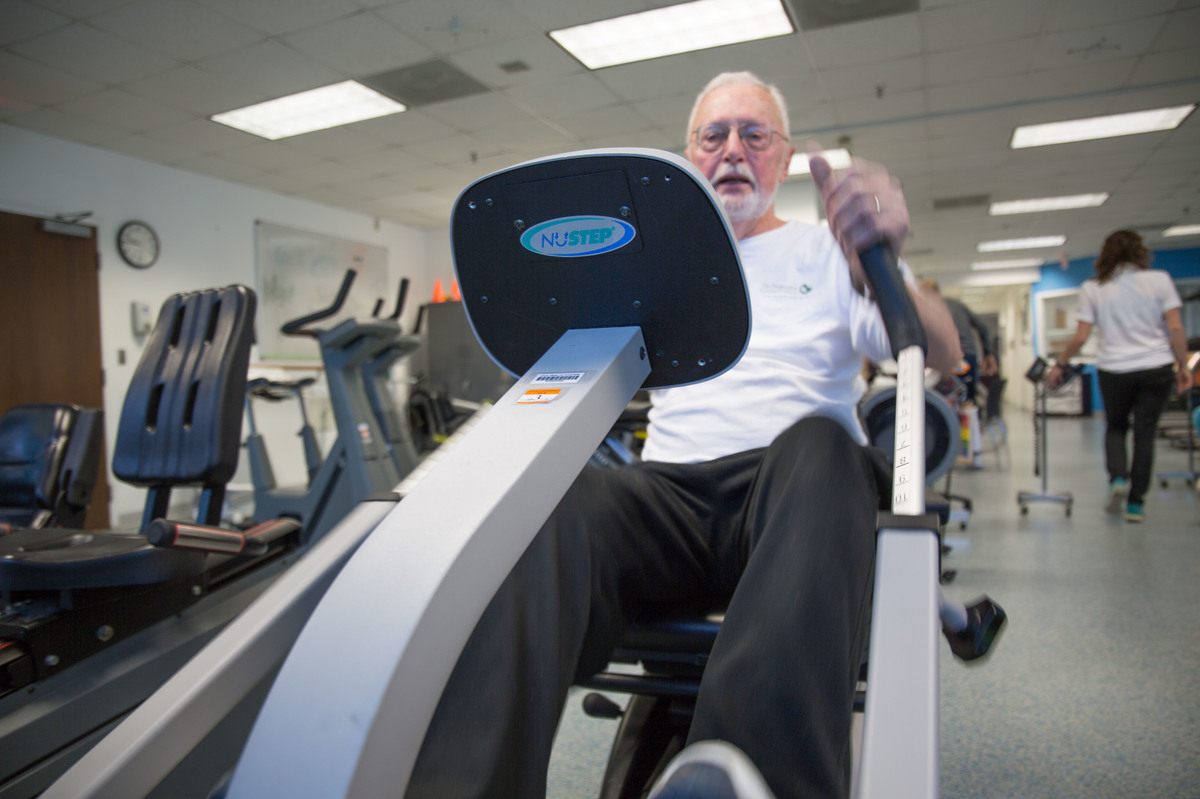 Charles Greiner gets his heart rate up — with supervision — at the U.Va. cardiac rehabilitation gym in Charlottesville, Va.

Right now, there actually aren't enough rehab programs in the U.S. to accommodate all the patients who are eligible, advocates say. A recent study in the Journal of Cardiopulmonary Rehabilitation and Prevention surveyed 812 existing cardiac rehab programs across the nation and found that even if they were expanded modestly and operated at capacity, the existing programs could serve only 47 percent of qualifying patients.

Still, advocates are hopeful that cardiac rehab may start to gain more traction, now that hospitals have an extra incentive to encourage patients to sign up. Because of provisions in the Affordable Care Act, hospitals now face financial penalties if too many of their cardiac patients need to be readmitted soon after discharge — and enrolling patients in rehab helps keep those numbers down, the evidence shows.

For example, getting patients into cardiac rehab programs cut hospital re-admissions by 31 percent in one Canadian study, according to a review of the literature by the American Hospital Association, saving $8.5 million a year; a study in Vermont pegged the savings at about $900 per patient.

Kathryn Shiflett, a hospital phlebotomist and one of Keeley's patients, is just 33 and has two young kids. A week after her heart attack she was at the U.Va. clinic looking for information about a rehab program. She's eager to get well. But she's not used to exercise and she's a bit nervous about cardiac rehab.

After being reassured that her vital signs would be monitored closely as she exercised, Shiflett hinted at the real barrier: She lives an hour away and is about to start a new job. Cardiac rehab classes happen Mondays, Wednesdays and Fridays, with sessions at 8 a.m., 10 a.m. and 3 p.m. 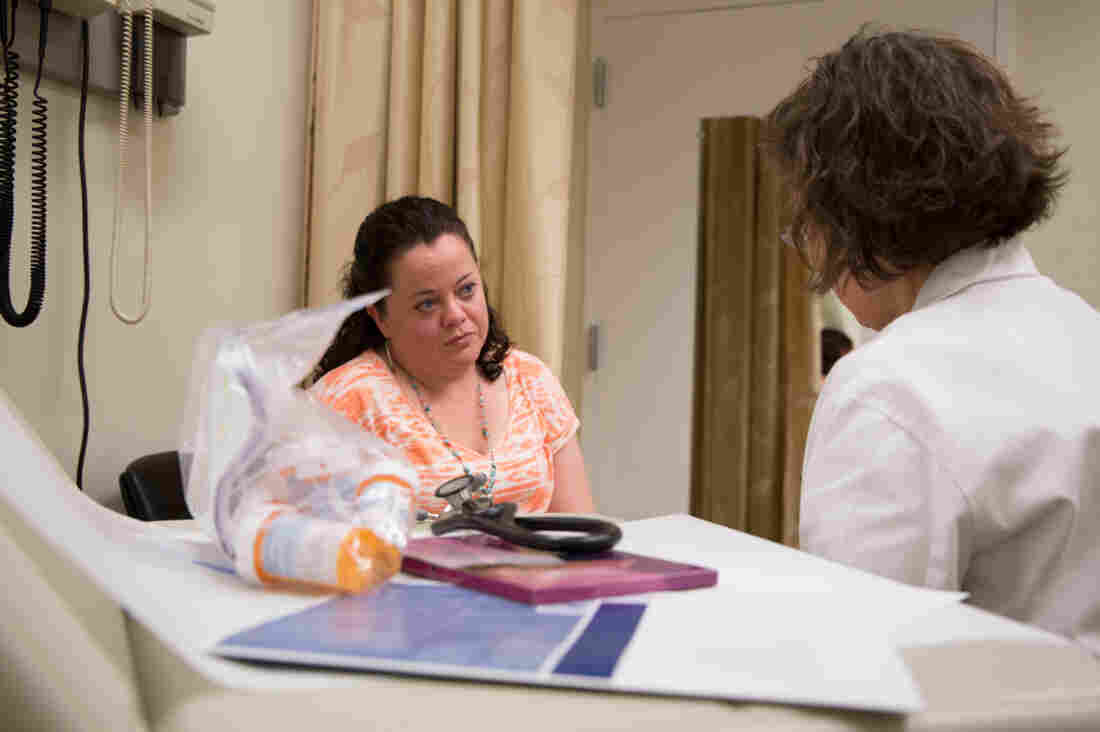 Just a week after her heart attack, Kathyrn Shiflett meets with Dr. Ellen Keeley, a U.Va. cardiologist, to learn more about the next steps in healing. Francis Ying/Kaiser Health News hide caption 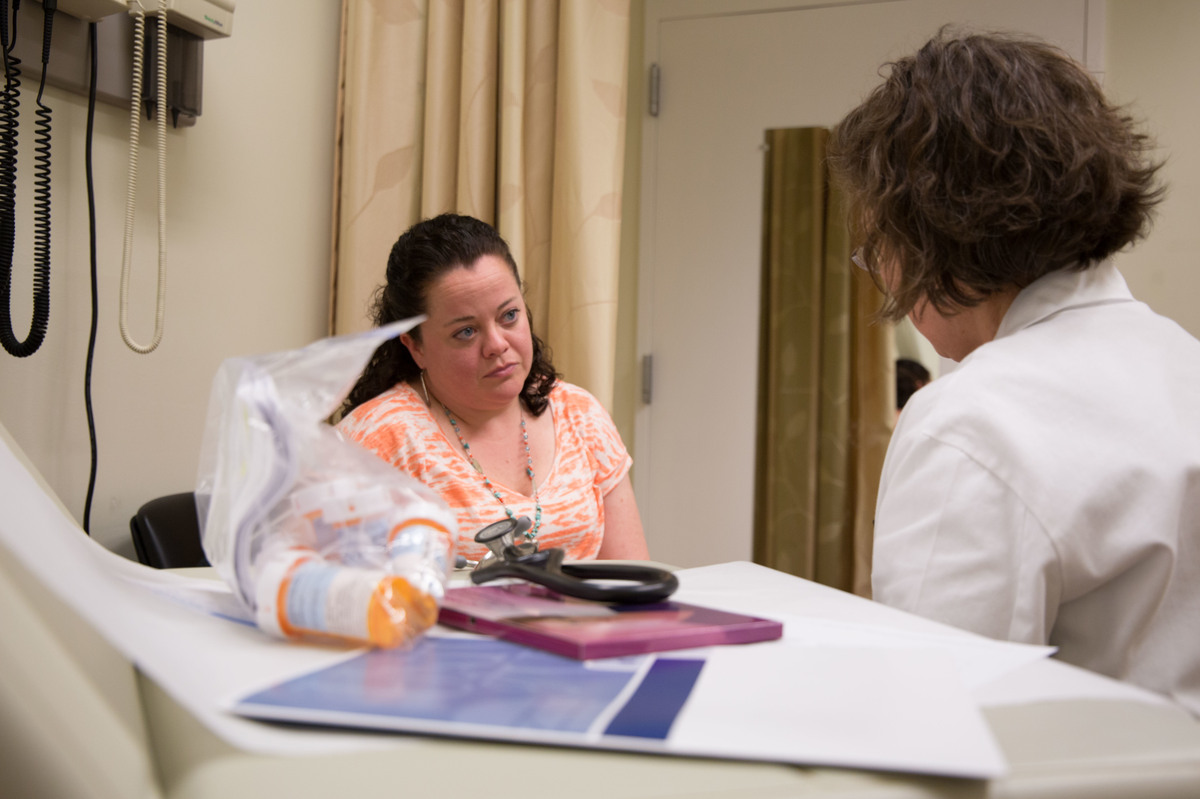 Just a week after her heart attack, Kathyrn Shiflett meets with Dr. Ellen Keeley, a U.Va. cardiologist, to learn more about the next steps in healing.

Oikonomides says there was no question that he would do whatever it took to participate in rehab after his bypass surgery this winter. Cardiac rehab sparked his love of exercise, he says — and that has helped keep him out of the hospital for decades.