Accessibility links
Twin Sisters Try To Get Pregnant With Ovaries They Froze In 2009 : Shots - Health News Each twin had an ovary removed and frozen in 2009, when they were in their 30s, in hopes of buying more time to get pregnant and have babies. But will the thawed, reimplanted ovaries work? 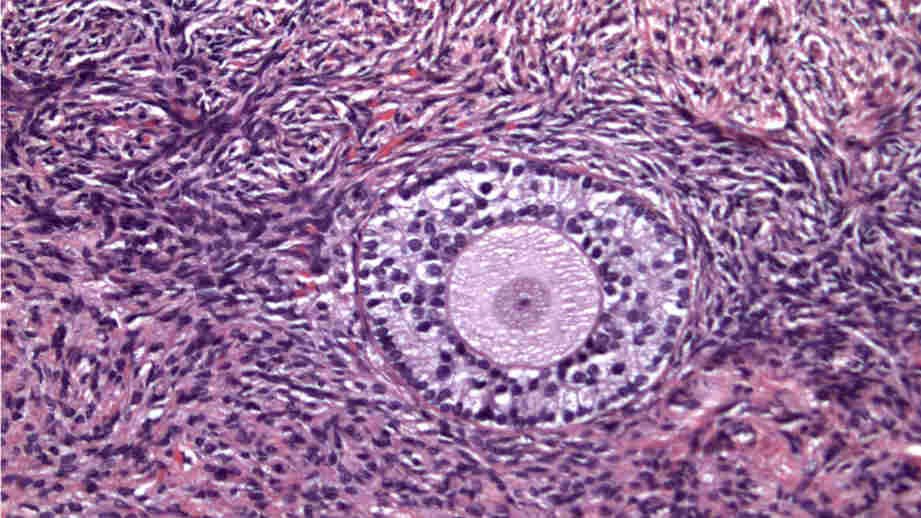 Ovarian tissue after the thaw — ready for reimplantation. Courtesy of The Infertility Center of St. Louis hide caption

toggle caption
Courtesy of The Infertility Center of St. Louis 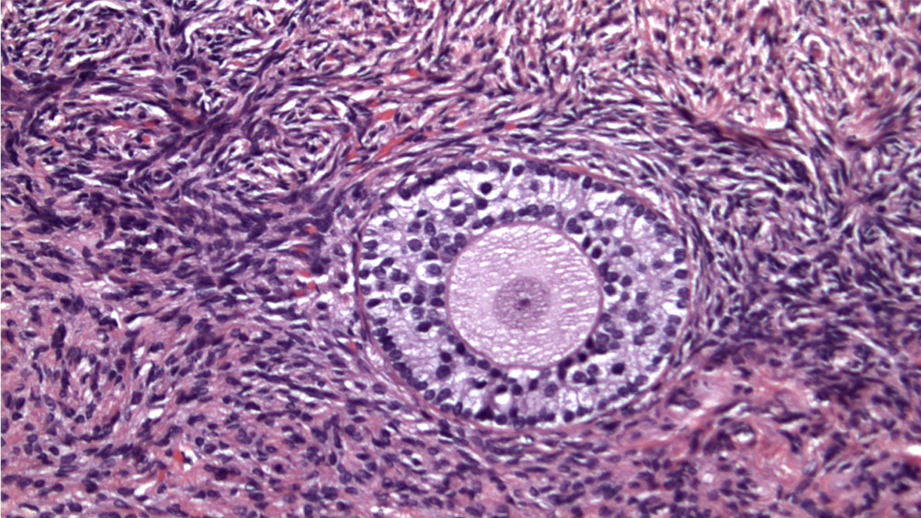 Ovarian tissue after the thaw — ready for reimplantation.

Courtesy of The Infertility Center of St. Louis

When Sarah Gardner was 34, she started getting worried about whether she'd ever have a baby. So she took a test that aims to measure a woman's fertility.

The results terrified her. They indicated she had the fertility of a woman a decade older — a woman in her mid-40s.

"I was devastated," Gardner says. The news hit her especially hard because she was in the midst of breaking up with her longtime boyfriend.

"I knew that being a mom was something I wanted in my life," she says. "And I knew that it would be very difficult to achieve that, given that I was about to be single. So, yeah, I was devastated."

In her hunt for a solution, Gardner eventually found Dr. Sherman Silber, a surgeon who runs the Infertility Center of St. Louis. As Shots reported in 2012, when we first met Gardner and her doctor, Silber does something controversial among infertility specialists — he removes and freezes the ovaries of healthy women to put their biological clocks on hold.

The idea is that the ovaries can then be thawed and returned to the women via surgery when they're ready to try to have children. 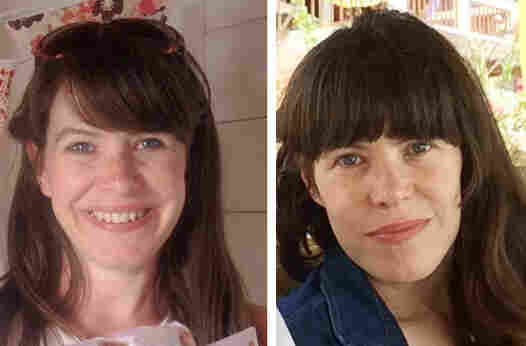 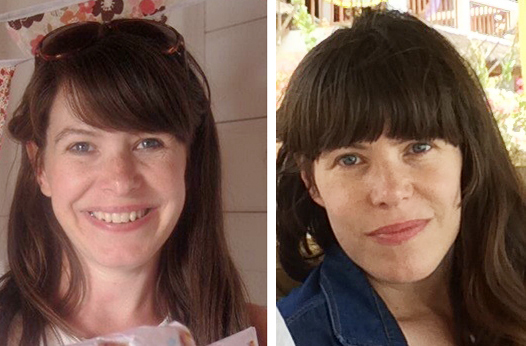 Joanne Gardner (left) and Sarah Gardner each had an ovary removed and frozen when they were in their 30s. Now 44, the women had the ovaries reimplanted in June.

Gardner, who lives in Australia, discussed that option with her twin sister, Joanne, who lives in London. Joanne was also worried about running out of time to have kids. So both sisters decided to undergo the procedure, as a hedge against their dwindling fertility odds.

"What it gave us was huge amounts of relief," Sarah Gardner says. "It really just took a huge weight off us."

Today the Gardner twins are 44; Sarah just got engaged and wants to finally try to have a baby. She and Joanne both returned to St. Louis in June to get their ovaries reimplanted.

"It's weird," Sarah Gardner says. "It's like we went in a time machine — a fertility time machine. It's amazing."

Not only do the sisters hope their reimplanted ovaries will help them get pregnant, they are also hoping the procedure will reverse their menopause.

"I'm really excited," Sarah says. "It will be really nice to not have another hot flash."

The approach was originally developed for women who are being treated for cancer and hope to preserve their fertility but don't have time to freeze their eggs. Some cancer treatments can destroy fertility.

Although removing ovarian tissue (or an entire ovary) and preserving it, then reimplanting it years later has produced promising results for such women, it remains far from clear how often the multistep procedure works. It's still considered experimental. The Gardner sisters may be the first women without a history of cancer to have undergone it, according to Silber.

Egg freezing, on the other hand, has been studied more extensively. And many experts say egg freezing, with its far from certain success, is much safer than going through two surgical procedures to have an ovary removed and later reimplanted.

Dr. Glenn Schattman, an associate professor of reproductive medicine at the Weill Medical College of Cornell University, says recommending ovarian freezing for women who don't have cancer is "irresponsible."

But Silber says freezing, thawing and reimplanting an ovary is easier, more reliable and safer than egg freezing; typically, harvesting the ovary and reimplanting it can both be done on an outpatient basis, he says.

Moreover, when an entire ovary is frozen, women don't have to undergo the weeks of hormonal injections required to ripen the multiple eggs that are extracted when the eggs are to be frozen, Silber says. And the total cost of the procedure to remove, freeze, thaw and and reimplant and reattach an ovary — less than $3,000 — is much lower, he says, than the cost of going through several attempts to collect eggs for freezing.

"There are huge advantages to this," Silber says.

Meanwhile, the Gardner sisters are once again home in Australia and England. They're both waiting for their periods to start again and hope to be pregnant by the end of the year.

"Wouldn't that be nice?" Sarah Gardner says, adding that she and her sister realize that the doctors can't guarantee success.

"We're going to leave it up to the gods or the universe," she says, "and see what happens."

An earlier headline on this story said that the Gardner sisters had ovaries removed and frozen in 2012. They actually had the procedures in 2009.