Accessibility links
Covered California's Health Plan Rates To Jump Sharply In 2017 : Shots - Health News After two years of moderate rate hikes, a double-digit increase in the cost of insurance premiums in California is likely to resonate across the U.S. in the debate about the benefits of Obamacare. 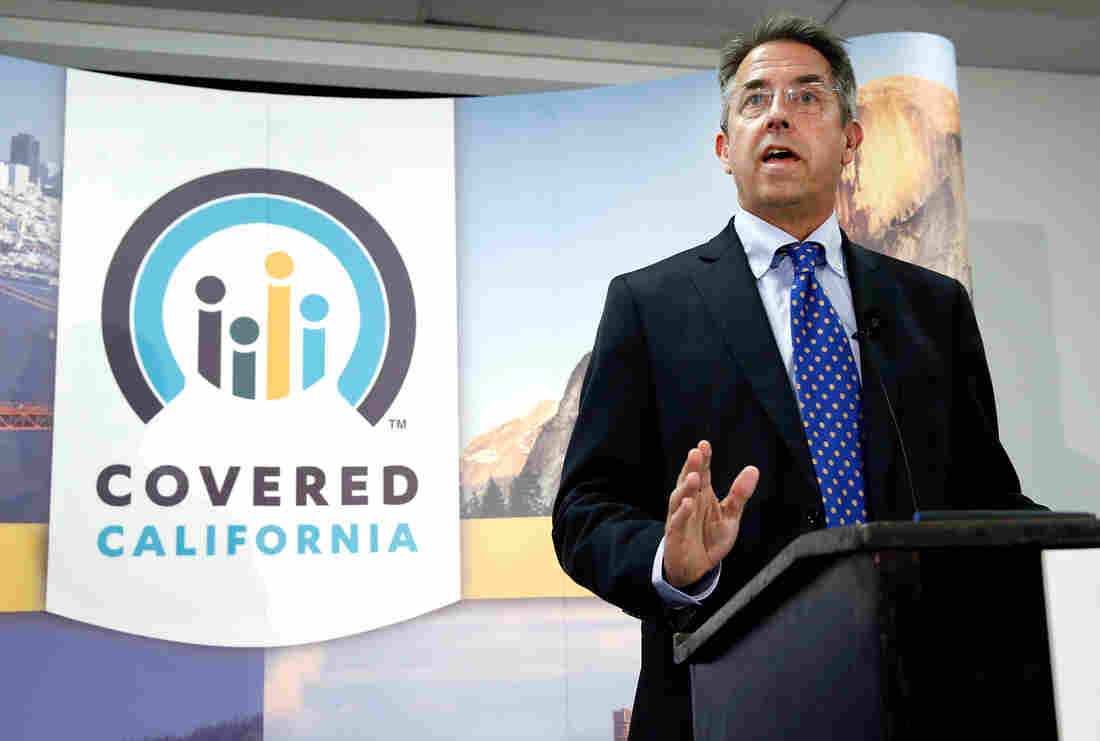 Peter Lee, executive director of Covered California, the state's health insurance exchange, said the projected rate increases for 2017 are linked to increases in the cost of health care in the state. Rich Pedroncelli/AP hide caption 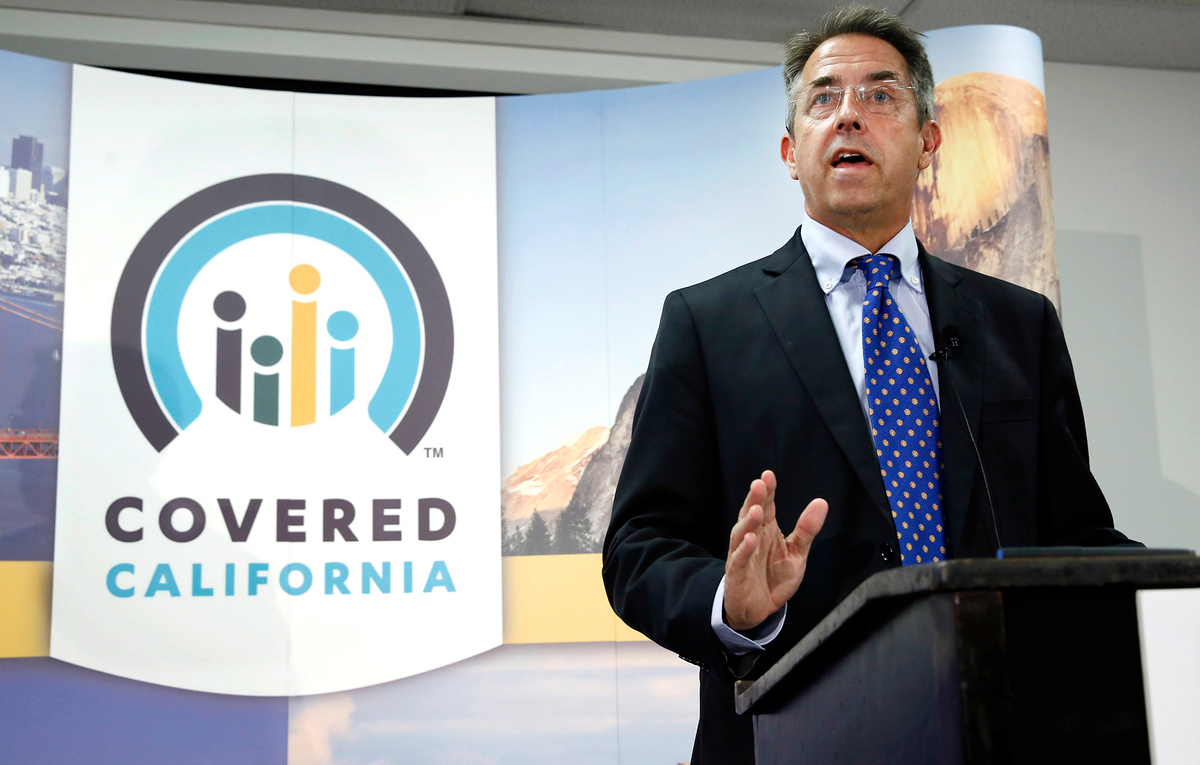 Peter Lee, executive director of Covered California, the state's health insurance exchange, said the projected rate increases for 2017 are linked to increases in the cost of health care in the state.

California's Obamacare premiums will jump 13.2 percent on average next year, a sharp increase that is likely to reverberate nationwide in an election year.

The announcement comes as the presidential candidates clash over the future of President Obama's landmark health law and as major insurers around the country seek to announce even bigger rate increases during the open enrollment period this fall.

California won plaudits by negotiating rate increases for its 1.4 million enrollees that averaged 4 percent in the past two years. But that feat couldn't be repeated for 2017, as overall medical costs continue to climb and two federal programs that help insurers with expensive claims are set to expire.

Health policy experts said California is rejoining the pack after keeping rate increases lower than much of the country during the first years of Obamacare.

Critics of the health law, including Republican presidential candidate Donald Trump, have been quick to seize on these rising costs as further proof that the Affordable Care Act warrants repeal for failing the average consumer.

The Obama administration counters that federal subsidies spare most consumers from the full impact of the premium increases and says the health law enables people to shop around for a better deal.

Last week, consulting firm Avalere Health found that the average rate increase being sought for widely sold silver plans on the state and federal health insurance exchanges was 11 percent across 14 states. But consumers could limit the increase by choosing one of the lower-cost silver plans, which are set to go up only 8 percent.

These rate increases apply to people who purchase their own coverage in the individual market, not to the majority of Americans, who get their health insurance through work or government programs such as Medicare and Medicaid.

Peter Lee, executive director of Covered California, said prices for 2017 reflect the rising cost of care, not efforts by insurers to increase their profits.

"Under the new rules of the Affordable Care Act, insurers face strict limits on the amount of profit they can make selling health insurance," Lee said. "We can be confident their rate increases are directly linked to health care costs, not administration or profit, which averaged 1.5 percent across our contracted plans."

Two federal programs that have helped health insurers offset costly medical claims, and cover sick patients in general, are set to end this year. They were intended as a temporary cushion for insurers, who are now required to accept all applicants regardless of their medical histories.

Insurers also have complained about lax rules for special enrollment outside the designated sign-up period. The loose rules have allowed some people to game the system by waiting until they need care to enroll, insurers say, and those people tend to generate more claims and higher costs. Federal and state officials say they have tightened the rules to address these complaints.

To press their case for higher rates, health insurers said they had the benefit of detailed data on exchange customers and their medical claims for the first time since these marketplaces opened in 2014.

Many consumer advocates in California had hoped that UnitedHealth Group Inc. would become another formidable competitor on the state-run insurance exchange. But the nation's largest health insurer is leaving Covered California after just one year of minimal participation — part of a broader pullback nationwide after the company posted heavy losses on individual plans.

The top four insurers in Covered California, led by Blue Shield of California and Anthem Inc., control more than 90 percent of enrollment.

The premium increases in California will vary widely by region and by insurance company and could pinch the pocketbooks of cost-conscious consumers like David Arnson.

Arnson, 57, of Los Angeles, qualifies for a federal subsidy and pays just $32 each month for a Molina Healthcare policy he purchased through Covered California. He said he relies on the coverage to help pay for treatment for ankle and knee problems.

Arnson, who works at a record store and plays in a band, said he worries about his monthly premium increasing next year.

"I make a marginal living," he said. "Like anything, you want to pay as little as possible. I need health care — it is at the top of my pyramid of necessities."

The higher rates in California may spur more consumers to switch health plans. Only 14 percent of Covered California enrollees who returned this year chose a different insurer. On the federal exchange, 43 percent of people switched plans for 2016.

However, the proliferation of narrow networks can make shopping complicated since certain doctors and hospitals may only be available through one or two insurers, and provider directories are often inaccurate.

Since 2014, California has benefited from having a healthier mix of enrollees compared with other states. One reason for that is that state officials defied the Obama administration by requiring insurers participating in Covered California to cancel existing individual policies at the end of 2013.

That unpopular decision quickly moved people into coverage that fully complied with the health law and created one giant risk pool for rating purposes. Those previously insured customers were generally thought to be healthier because, before the switch, insurers could deny coverage to people with pre-existing conditions.

But that positive effect may be wearing off as people get sick over time or leave the individual market for coverage elsewhere, health care analysts say.

The expansion of coverage under the Affordable Care Act has driven the percentage of uninsured Californians to a record low.

The share of Californians lacking health insurance was 8.1 percent at the end of 2015, down from 17 percent in 2013, federal data show.

The expansion of Medi-Cal, the state's Medicaid program for lower-income residents, accounts for a significant part of that reduction. Since January 2014, nearly 5 million people have joined the Medi-Cal rolls, bringing total enrollment to 13.4 million — about a third of the state's population.

Kaiser Health News is an editorially independent news service that is part of the nonpartisan Henry J. Kaiser Family Foundation. This story was produced by KHN, which publishes California Healthline, a service of the California Health Care Foundation. Anna Gorman of KHN contributed to this report.