Accessibility links
Deciphering Indiana Governor Mike Pence's Record On Health Care : Shots - Health News Pence signed into law some of the tightest abortion rules in the U.S., and was slow to respond to Indiana's heroin and HIV crises, critics say. But he compromised with Obama to expand Medicaid. 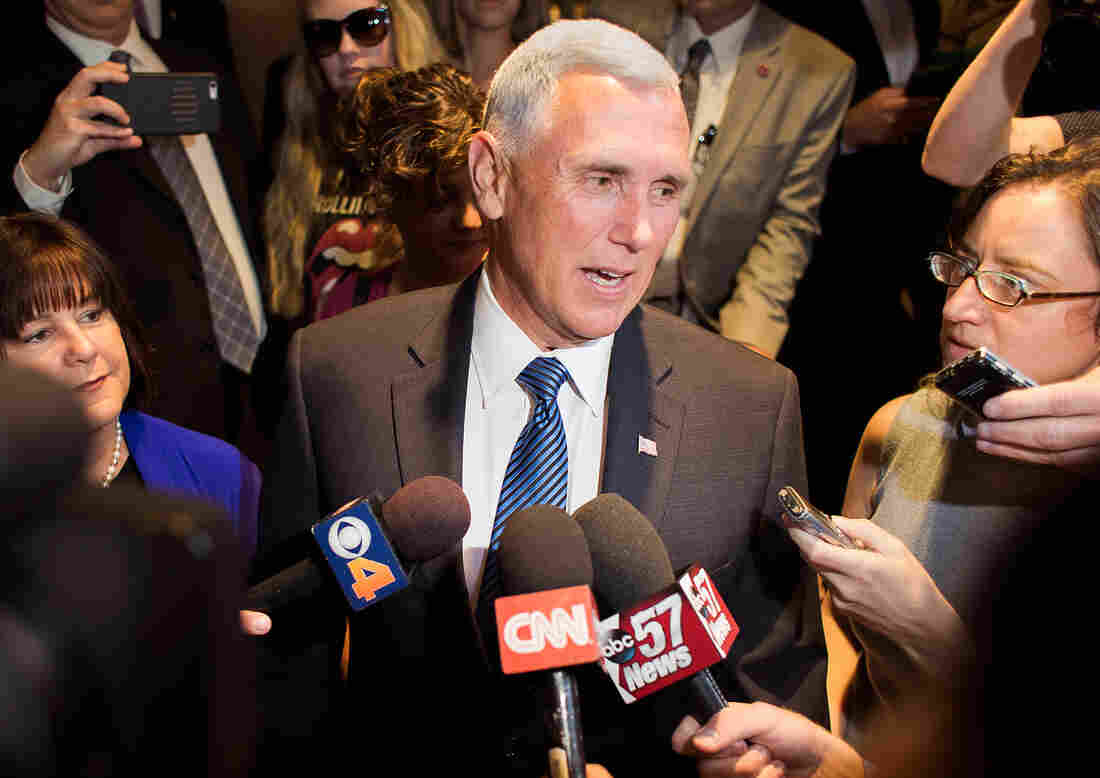 Indiana Gov. Mike Pence took questions from the media as he and his wife, Karen, left their New York hotel to meet with Republican presidential candidate Donald Trump on July 15. Pence has drawn criticism from the left and the right for various health care stances. Andres Kudacki/AP hide caption 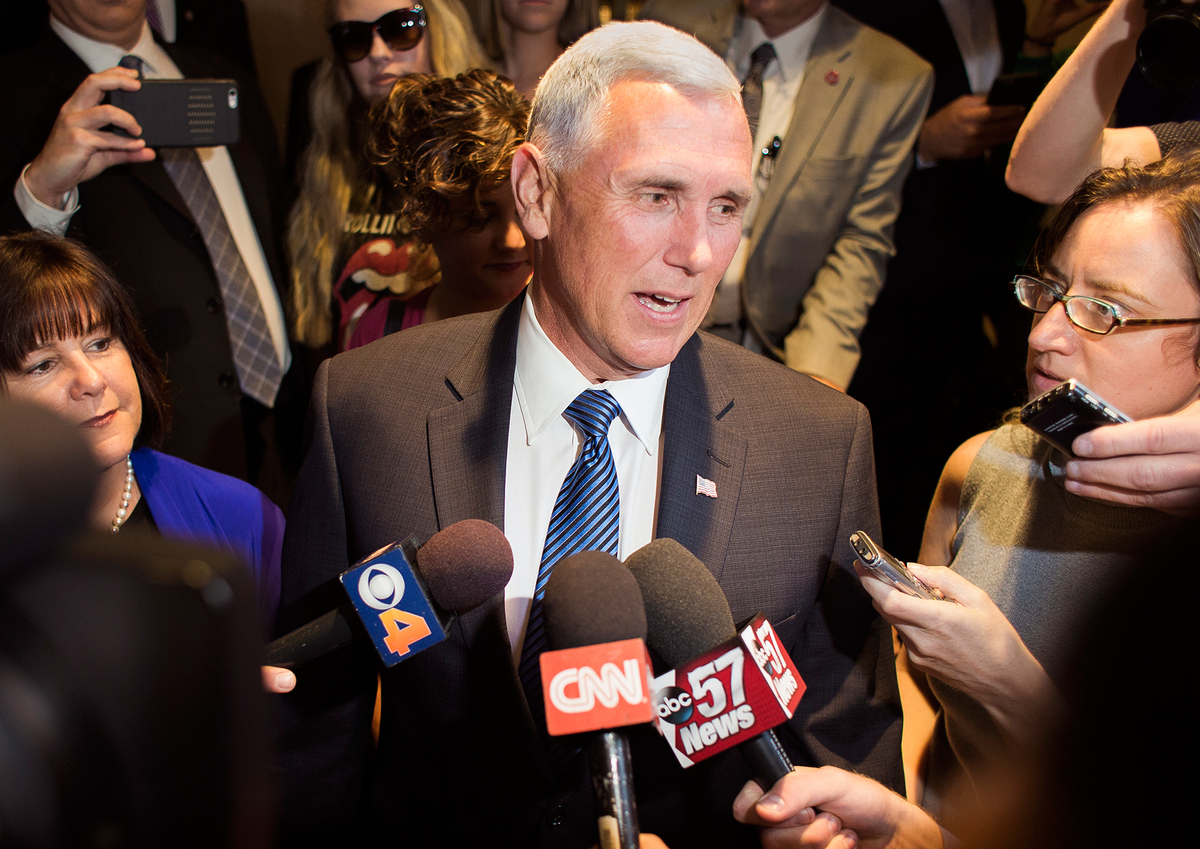 Indiana Gov. Mike Pence took questions from the media as he and his wife, Karen, left their New York hotel to meet with Republican presidential candidate Donald Trump on July 15. Pence has drawn criticism from the left and the right for various health care stances.

Indiana Gov. Mike Pence is in the spotlight this week as the man Donald Trump has picked to be his running mate. Pence's decisions about health and health care in Indiana have drawn attention from within and outside the state. His record could be important in November, because Trump doesn't have a legislative record at all.

Pence has always been a vocal opponent of the Affordable Care Act, even after the federal law passed in 2010 and was upheld by the Supreme Court.

But when faced with the choice of whether to expand Medicaid to cover Indiana residents who earn incomes that are 138 percent of the federal poverty level or below, a key part of the ACA, Pence compromised. He debuted a conservative-friendly version of the expansion, one that requires Medicaid recipients to pay a monthly contribution, based on income, into a health savings account. Recipients who miss a payment can be bumped to a lower level of coverage, or lose it entirely, for six months.

Now, after a year and a half, the Healthy Indiana Plan, or HIP 2.0, has enrolled about 190,000 more people into health coverage.

Caitlin Priest, director of public policy at Covering Kids & Families of Indiana, says the plan has helped many people get health insurance for the first time in their lives.

"It's really been a wonderful way to move the needle both on healthcare access and ultimately on long-term health outcomes," Priest says.

Pence took criticism from the right for accepting a component of Obamacare, but his conservative tweaks to Medicaid have other Republican-led states looking at that model.

Pence drew criticism from local and national infectious disease experts for his response to an urgent health crisis in Indiana. In February of 2015, the state reported an outbreak of HIV in Scott County, blamed on opioid addiction and needle sharing.

It got so bad — growing to more than 80 cases in the month after the announcement, and more than 190 to date — that the CDC went to Indiana to investigate, and public health experts began calling for a needle exchange. At the time, syringe exchanges were illegal in the state, and Pence was opposed to changing that, at first.

Only a few counties have done it, so far, because the process takes a lot of planning, local support and money, which the state doesn't provide, says Carrie Lawrence, a researcher with the Rural Center for AIDS/STD Prevention.

"If you're the health department with only two part-time staff, and a full-time health director, who's going to do this, and when is it going to happen?" Lawrence says.

"I think we are dealing with the consequences of the fact that that we don't have a strong infrastructure for public health in the state," she says.

As governor, Pence signed legislation that cut Indiana's budget for public health programs, despite the state's many pressing public health problems. Indiana has a high smoking rate, high obesity rate, and high infant mortality rate. The state is ranked nearly last for both federal and state public health funding. According to Trust for America's Health, Indiana spends just $12.40 per resident on public health. West Virginia, in contrast, spends more than $220.

As a member of Congress from 2001 to 2013, Pence voted against funding for health programs such as the State Children's Health Insurance Program and the Prevention and Public Health Fund.

As a congressman, Pence was an early advocate for defunding Planned Parenthood, and this year, women's health advocates have clashed with him again.

In March, the governor signed a bill that's been cited as one of the most restrictive in the U.S., barring abortion on the basis of disability, gender or race of the fetus. It also requires women to get an ultrasound at least 18 hours before the procedure, and requires that the fetal remains be buried or cremated.

What Did Mike Pence Do For Indiana Schools As Governor? Here's A Look

Some Indiana women responded by updating the governor's office with (sometimes graphic) news on their menstrual cycles by phone and on social media with the hashtag #periodsforpence. The social media backlash mirrors #periodsarenotaninsult, which took aim at Donald Trump last year.

The Indiana ACLU brought a lawsuit against the state's abortion restrictions — and a judge has since blocked portions of that law. "What the state of Indiana has attempted to do here ... grossly flies in the face of existing law," says ACLU attorney Ken Falk.

This story is part of NPR's reporting partnership with Side Effects Public Media and Kaiser Health News. For more on Pence, check out this profile by NPR's Nina Totenberg, and a review of his record on education.