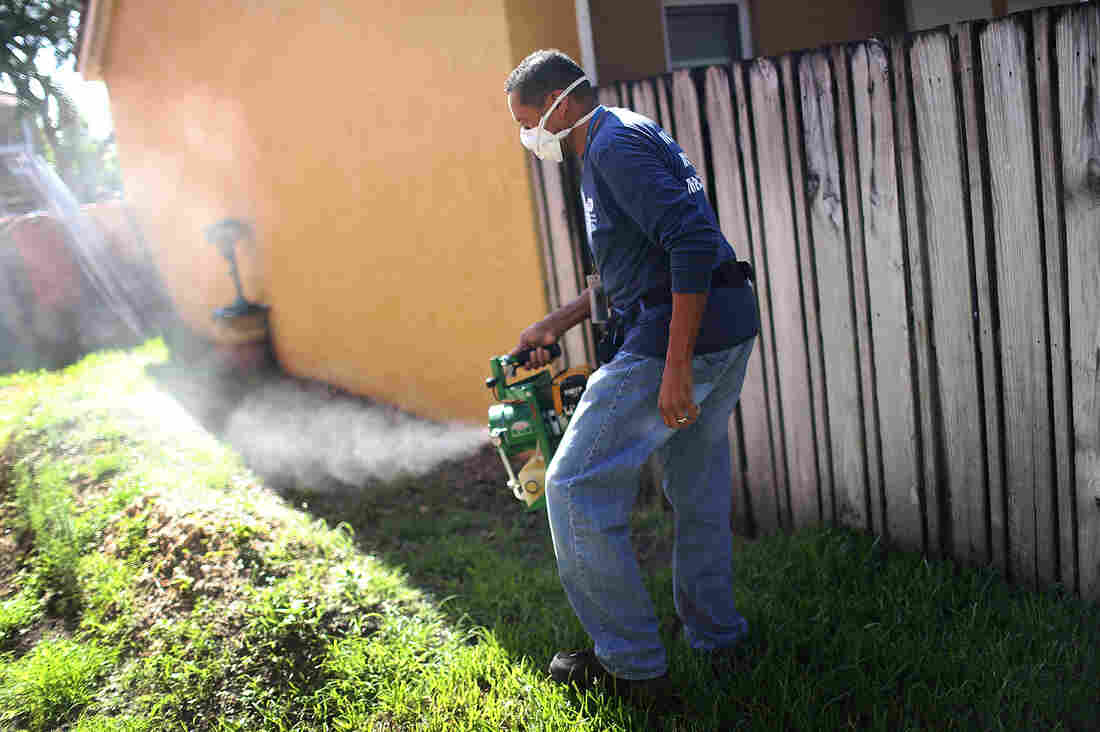 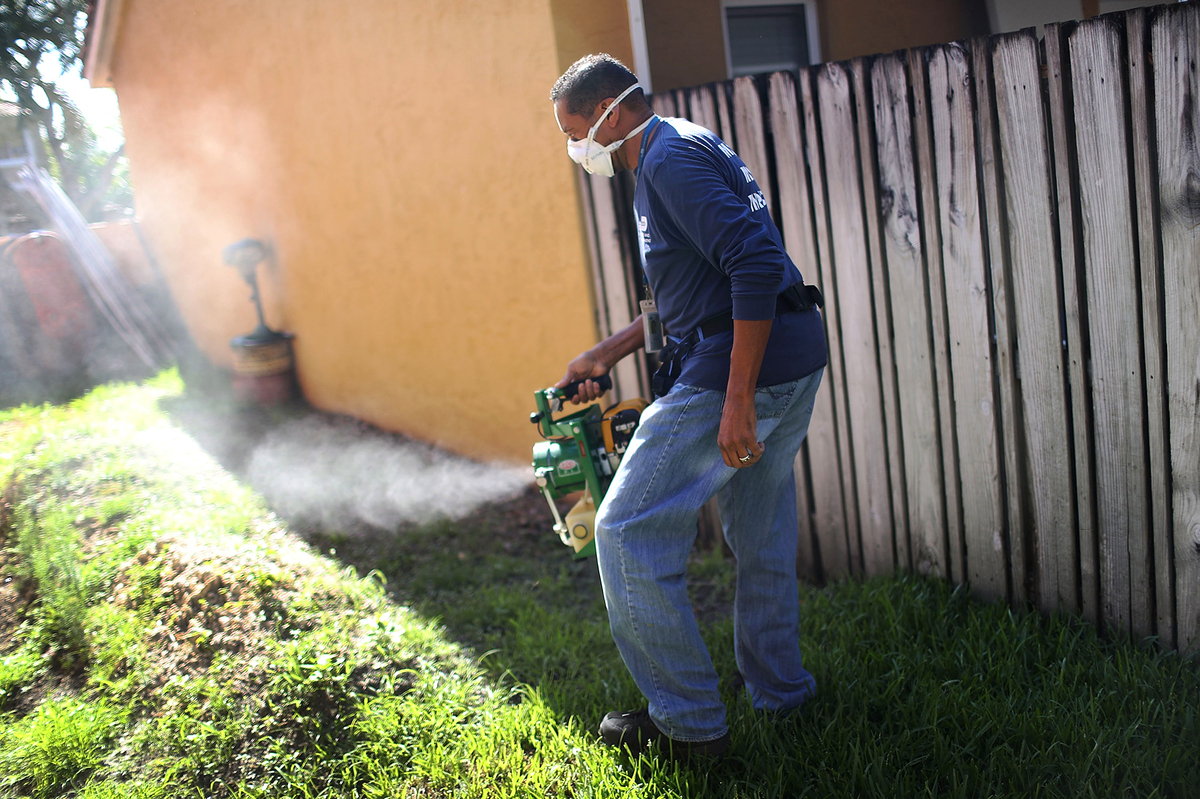 Larry Smart, a Miami-Dade County mosquito control inspector, uses a fogger to spray pesticide to kill mosquitoes in an effort to stop a possible Zika outbreak in Miami.

In a well-kept neighborhood in Miami with lush gardens, Larry Smart, a county mosquito control inspector, holds a turkey baster up to the light. "If you look closely, you'll see some moving fast. They're wriggling around," he says. "That's actually mosquito larvae." Smart uses the turkey baster to sample standing water in hard-to-reach places.

Florida is home to dozens of mosquito species, but the one officials are most concerned about now is Aedes aegypti, the main species that carries the Zika virus. These mosquitoes typically live near people and can breed in as little as a teaspoonful of stagnant water.

Health officials are worried that Zika may have a foothold in South Florida. They're investigating two cases of Zika that may have been contracted from mosquitoes in Florida, not by people traveling abroad.

At this Miami home, Smart found mosquito larvae in water held in the leaves of a bromeliad, a flowering plant common in South Florida yards. 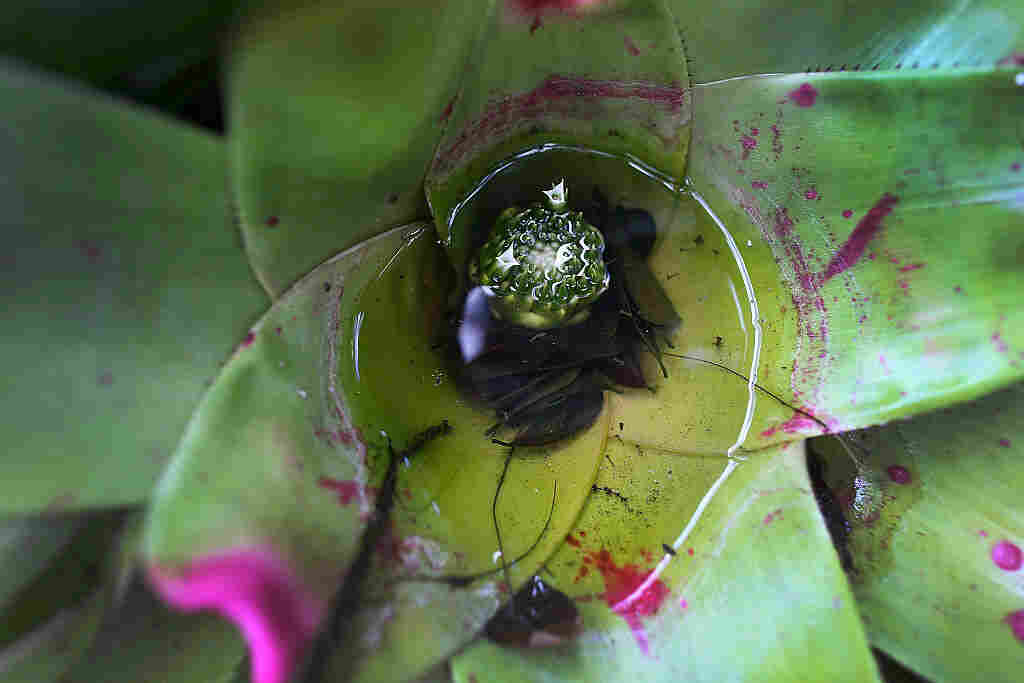 Mosquitoes like to breed in the pooled water in plants like this bromeliad. Joe Raedle/Getty Images hide caption 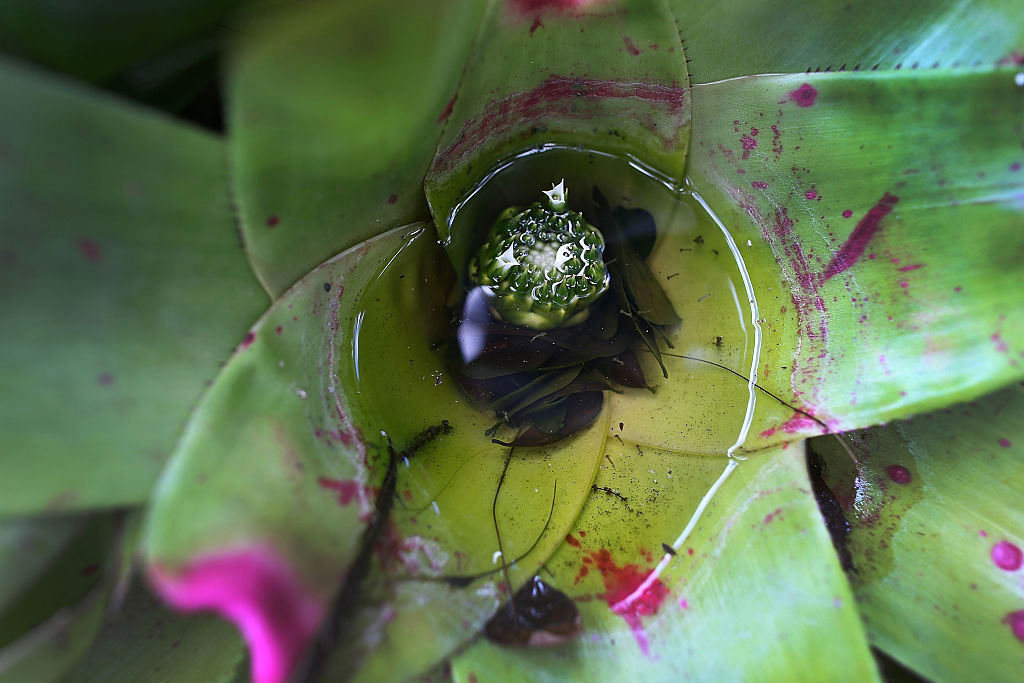 "They'll breed in there and become adults," he says. "A lot of people don't realize that a plant like that is renowned for mosquitoes."

With a handheld fogging machine, Smart mists the foliage with an insecticide. He also drops pellets that kill mosquito larvae into the plant. Officials say going door-to-door and spraying by hand is the most efficient way to stop the Aedes aegypti mosquito and the spread of Zika.

Over the past week, Miami's mosquito control activity has been focused on one particular neighborhood. It's near the home of a person health officials say may have contracted Zika locally from a Florida mosquito. There are actually two cases of suspected local transmission now, one in Miami and one just north in Florida's Broward County. But Lilian Rivera, the head of Miami-Dade County's Health Department, says there are few details she can share.

"We are in an active investigation stage, not only in Miami but also in Broward," she says. Her message for the media and the public? "Just to have patience."

Florida's Department of Health is working with the Centers for Disease Control and Prevention to rule out other ways the two individuals could have contracted Zika, such as through travel or sexual transmission. The department is also trapping mosquitoes and testing them for the Zika virus. So far, none have come back positive. Miami took similar measures in 2010 when the city saw a number of dengue cases. Because it can cause birth defects including microcephaly, Zika is even more worrying.

Miami's head of mosquito control, Chalmers Vasquez, says he really wasn't surprised when health officials began investigating a possible locally acquired Zika case, because of the city's close contacts with the Caribbean and Latin America. He says: "The virus is flowing through Miami International Airport every day. There are thousands and thousands of people coming back into our area from those countries that may be affected, they may not be."

Vasquez says, "We're trying to be as aggressive as possible."

Officials in Florida are concerned about how much the Zika response will cost. This week, the White House announced it was sending $60 million in Zika funding to the states, including $5.6 million for Florida.

Much more will be needed, says Peter Hotez, dean of the National School of Tropical Medicine at the Baylor College of Medicine. He's concerned Zika may already be established in mosquitoes in Florida, Texas and other states along the Gulf Coast. But so far, funds haven't been made available for intensive testing and surveillance.

"You have to have teams of people going into affected communities, community health centers, asking about fever and rash, and then taking a blood sample and testing it," Hotez says. "That requires some resources and it's not being done. I'm worried that we could be seeing quite a bit of Zika happening now. It's just that no one's looking."

The Obama administration is asking Congress for $1.9 billion to fund the fight against Zika, so far without success. And, at the height of mosquito season on the Gulf Coast, Congress has adjourned until after Labor Day.

In the audio of this story, as in a previous Web version, we say the National School of Tropical Medicine is at Baylor University. In fact, it is part of the Baylor College of Medicine, which separated from Baylor University in 1969.