Accessibility links
Cosplayers Use Costume To Evoke Their Inner Strengths : Shots - Health News A shy woman becomes a brave warrior princess. A man calls on Captain America to help him lose 45 pounds. In costume role play they become part of a community where they can transform themselves.

Cosplayers Use Costume To Unleash Their Superpowers

Cosplayers Use Costume To Unleash Their Superpowers

Leland Coleman of Nashville, Tenn., says Captain America was an inspiration to him over the past year as he lost 45 pounds and went off insulin. So he designed this Renaissance version of the character. The costume, he says, "gave me the strength. I feel like I've grown into it and become it. He and Becki Turner were among the attendees at AwesomeCon in Washington, D.C., in June. Meredith Rizzo/NPR hide caption

Leland Coleman of Nashville, Tenn., says Captain America was an inspiration to him over the past year as he lost 45 pounds and went off insulin. So he designed this Renaissance version of the character. The costume, he says, "gave me the strength. I feel like I've grown into it and become it. He and Becki Turner were among the attendees at AwesomeCon in Washington, D.C., in June.

"My name is Becki," says a young woman standing in a convention center turned comic book bazaar. Then she flips a mane of orange hair and launches into Scottish accent. "And today, I am Merida from Brave."

Becki Turner, a 28-year-old from Waldorf, Md., is at AwesomeCon in Washington, D.C., along with thousands of other attendees dressed in elaborate costumes. When she's not a fictional Scottish princess from a Disney movie, Turner says she's much more withdrawn. "I'm much less shy when I'm in cosplay. I don't have as much hangups as I do when I'm me, [like] a little bit of social anxiety."

She flares her green dress and brandishes a recurved bow with a grin on her face. "[Merida's] a strong, fierce, independent woman," Turner says. And today, so is she.

Costuming as science fiction or fantasy characters began at science fiction conventions in the United States back in the 60s and 70s. The first cosplayers wore outfits from Star Trek and Star Wars. But the practice has really grown. People wear costumes from comic books, anime, video games, movies and TV series. Think of a character from even a modestly popular science fiction or fantasy universe, and there's probably been someone who's masqueraded as that character. And there large subgroups of specialty cosplay like the "bronies:" men who dress up as ponies from My Little Pony.

Now cosplayers, a portmanteau of costume role players, regularly pack conventions in Japan, Europe and the U.S. For geeks, the convention offers a sanctuary where they can nerd out and meet their science fiction and fantasy brethren. For the cosplayers, that means sharing the experience of transforming themselves into someone, or something, else.

But for many, it's not a mere game of dress-up. The costumes they choose bring out something in them that's not usually visible. Ni'esha Wongus from Glen Burnie, Md., carries a 6-foot foam gun and wears a tight pleather bodysuit. "I am Fortune from Metal Gear Solid 2," she says. "I still consider myself an introvert. But once I got all the buckles and straps on and the gun and stood in front of the mirror for the first time? I fell in love with it. I feel like there's some strength, some confidence in me now because of this."

And for Leland Coleman of Nashville, Tenn., his costume symbolizes a physical transformation. Captain America was an inspiration to him over the past year as he lost 45 pounds and went off insulin. So he designed a Renaissance version of the Marvel Comics character. The costume, he says, "gave me the strength. I feel like I've grown into it and become it." 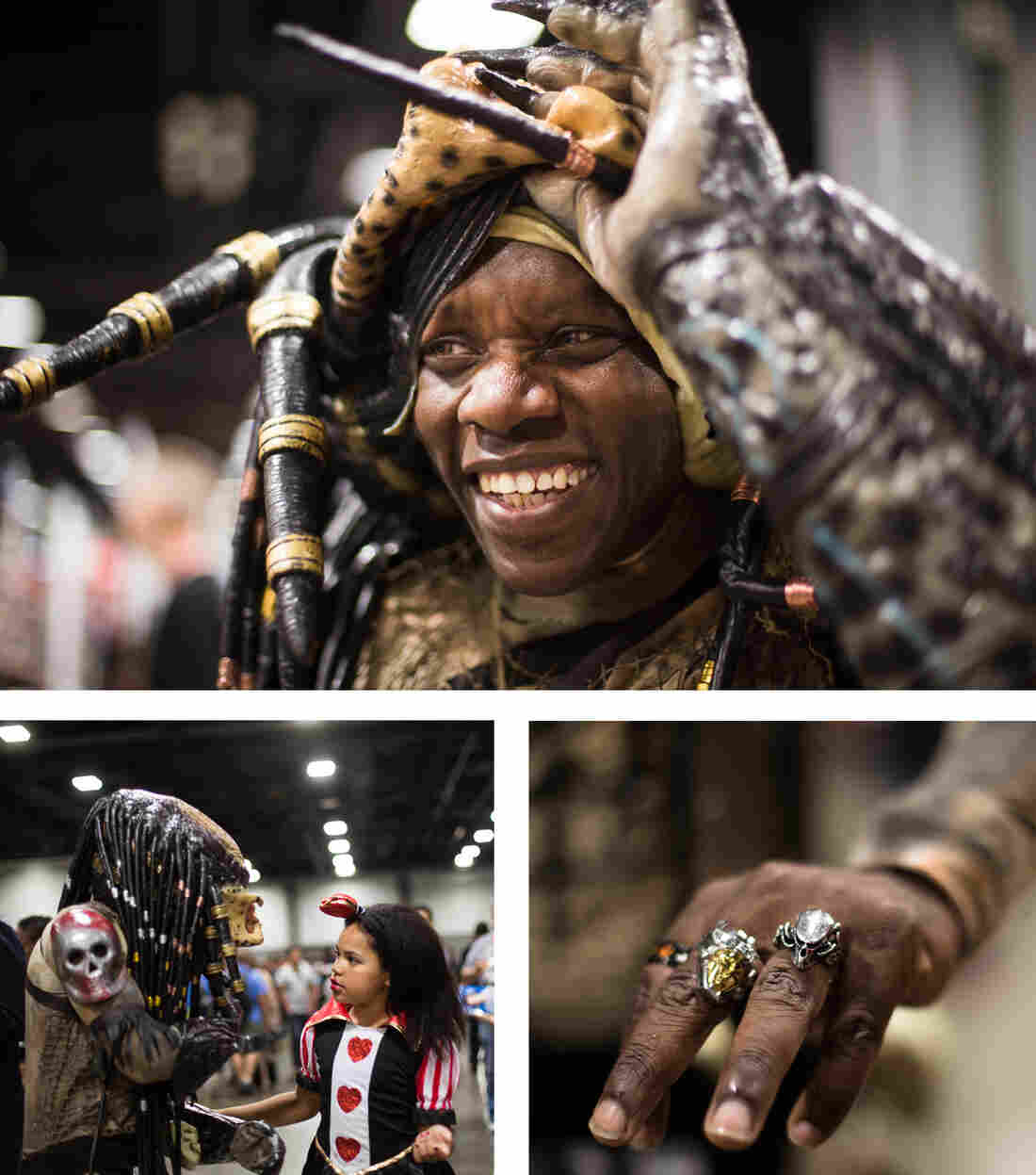 Jayson Brown of Sterling, Va., portrays Predator from the 1987 film. Brown has spent the past two years working on his costume, which includes a Predator ring that he wears even when he's not cosplaying. Brown's daughter Skyla Brown is dressed as the Queen of Hearts from Alice in Wonderland. Meredith Rizzo/NPR hide caption 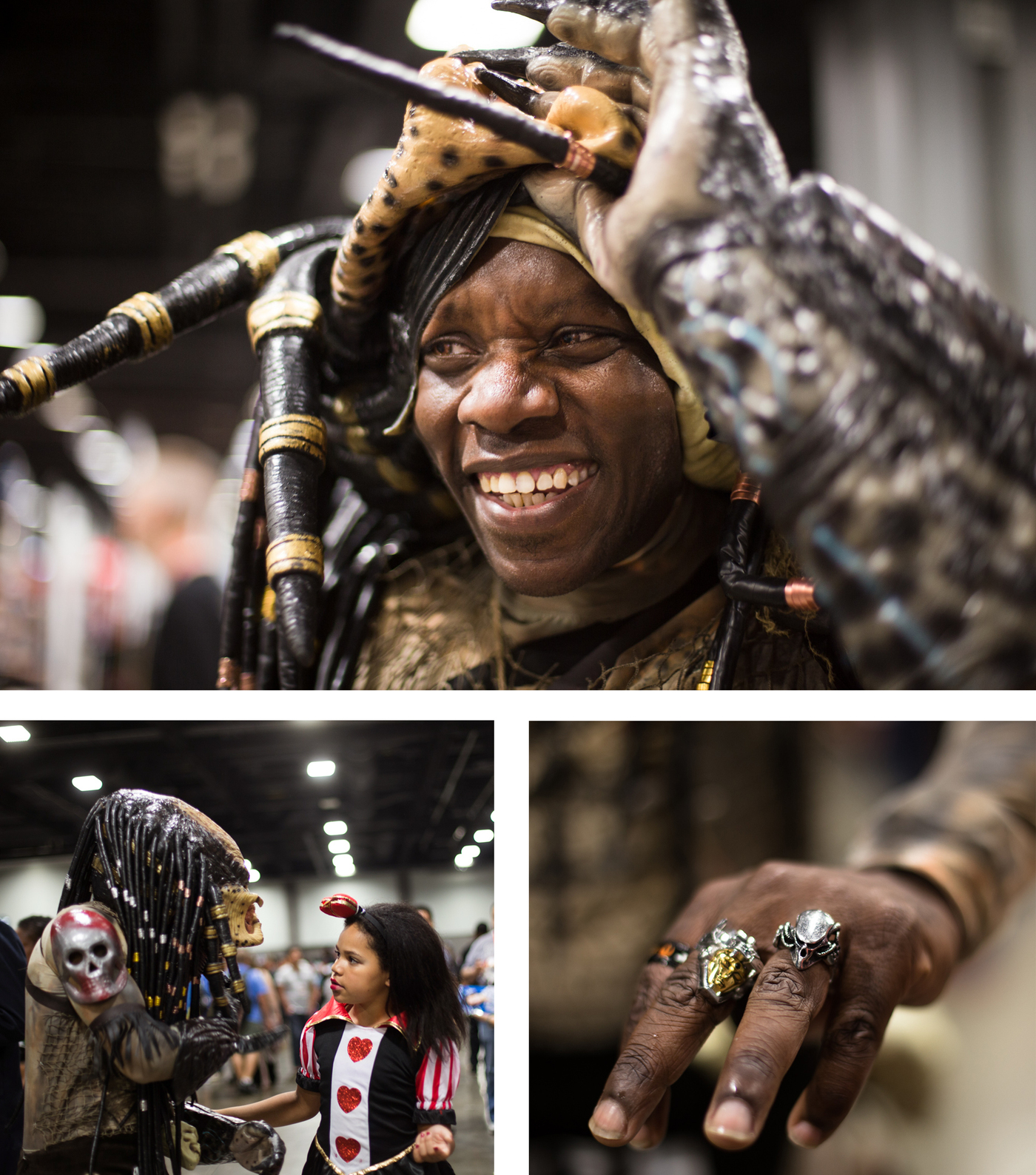 Jayson Brown of Sterling, Va., portrays Predator from the 1987 film. Brown has spent the past two years working on his costume, which includes a Predator ring that he wears even when he's not cosplaying. Brown's daughter Skyla Brown is dressed as the Queen of Hearts from Alice in Wonderland.

These cosplayers are invoking clothing's subtle sway over us. People have used clothing to subdue, seduce and entertain for millennia. In some outfits, people not only look different, but they feel different. Psychologists are trying to figure out how clothes can change our cognition and by how much. Adam Galinsky, a psychologist at Columbia Business School, spoke with NPR's Hanna Rosin for the podcast and show Invisibilia. Galinksy did a study where he asked participants to put on a white coat. He told some of the participants they were wearing a painter's smock, and others that they were in a doctor's coat.

The Secret Life Of Clothes

Do clothes have the power to transform us? The latest episode of the NPR podcast Invisibilia explores seven stories about how the clothes we wear affect us more than we think (though perhaps less than we hope).

Then he tested their attention and focus. The people who thought they were in the doctor's coat were much more attentive and focused than the ones wearing the painter's smock. On a detail-oriented test, the doctor's coat-wearing participants made 50 percent fewer errors. Galinksy thinks this is happening because when people put on the doctor's coat, they begin feeling more doctor-like. "They see doctors as being very careful, very detailed," Galinksy says. "The mechanism is about symbolic association. By putting on the clothing, it becomes who you are."

Almost any attire carrying some kind of significance seems to have this effect, tailored to the article as a symbol. In one study, people wearing counterfeit sunglasses were more likely lie and cheat than those wearing authentic brands, as if the fakes gave the wearers a plus to cunning. "If the object has been imbued with some meaning, we pick it up, we activate it. We wear it, and we get it on us," says Abraham Rutchick, a psychologist at California State University Northridge.

In Rutchick's studies, he has found that people wearing more formal clothing like they would wear to a job interview thought more abstractly and were more big-picture oriented than people in casual wear. For example, those in formal clothing would say that locking the door was more like securing a house, an abstract concept, than turning a key, a mechanical detail.

The effect from clothing is probably twofold, Rutchick says. "When I gear up in those things, I will feel a certain way," Rutchick says. Then, he says, "I [also] feel how people are perceiving me, and that's going to change how I act and how I think about myself."

The effect of that feedback is obvious in the cosplay convention atmosphere, where people rush to compliment one another on costumes and take photos.

Riki LeCotey, a well-known cosplayer from Atlanta who goes by the stage name Riddle, says that the power she finds in cosplay is both from the costume and from people's reactions. "Someone is like, you're a perfect Black Cat [a character from Spiderman]. So you're like, 'Oh they think I'm sexy. I feel sexy in the costume. Maybe I am sexy,' " she says.

And those feelings linger after the con, LeCotey says. "When you take the costume off, you kind of remember. Or you look at photos and it reminds you. If you keep doing it over and over again, it just stays with you. It's like a muscle memory – of sexiness." LeCotey says cosplaying has helped her become far more confident than the shy teenager she was 17 years ago when she started.

At a fundamental level, LeCotey says, "[cosplaying] is about embodying the characters you love." For her, that means choosing characters that she identifies with because of a similar history or an attribute that she admires. About a quarter of cosplayers would agree with her, saying they choose their characters because of psychological traits or their narratives, based on a survey done in The Journal of Cult Media.

The clothing is a conduit to those traits, but it doesn't always need to be elaborate. "Like today, I woke up, and I wanted to wear something like Black Widow," says Jennifer Breedon, an AwesomeCon attendee from Washington, D.C. She's dressed in a leather jacket, black tights and combat boots. It's not Natasha Romanova's leather catsuit, and there's no S.H.I.E.L.D. patch to identify the Marvel Comics hero. Still, it works for Breedon. "And today, I'm channeling that character, that person, that part of me that feels that affinity with them."

She calls it a subtler cosplay, choosing characters who tend to wear simpler or street casual outfits. "Even if it's under the radar, even if nobody notices it. I know what it is," she says.

The costumes can be barely noticeable – say, the grey hoodie, jeans and boots of another Marvel Comics hero, Jessica Jones. But Breeden says that at a terrible moment, when she was alone and defeated, these clothes helped her draw the strength to move forward.

Breedon, now 32, says that a decade ago she felt like a failure. She struggled with an eating disorder, drug abuse and one serious suicide attempt. And along the way, "I hurt a lot of people." She says that in the years since rehab, her life and health has felt precarious. "Even today, there's an underlying shame, and I need to work through it every single day."

She worked her way through law school, graduated and got a job. It felt like a huge achievement; she told everybody. Then they canned her a few months later, saying it wasn't a good fit. She spiraled into a depression, thinking, "I'll never be good enough."

For three days, Breedon says, she sat alone in her apartment, re-watching Jessica Jones. She made a point of dressing just like Jessica, in her grey hoodie. "I had to be Jessica," she says. "The hoodie gave me purpose. Jessica Jones is always like, 'I don't want to work for your law firm or S.H.I.E.L.D. or whatever.' She had to do her own thing. It made me think, 'Maybe I'm not meant to work for this organization.' I just felt at peace."

Breedon moved on. She got a job working as an attorney and human rights analyst that she loves. She says she gets to help people, just like her heroes. And when she finds herself in need of toughness, she has their talismans, the hoodie, the leather pants, the boots, waiting in her closet.