Accessibility links
Some Children May Be Missing Out On Treatment For Hepatitis C : Shots - Health News Now that there are better treatments for hepatitis C in adults, doctors hope the drugs soon will be approved for use in children who were infected at birth. But many at-risk infants don't get tested. 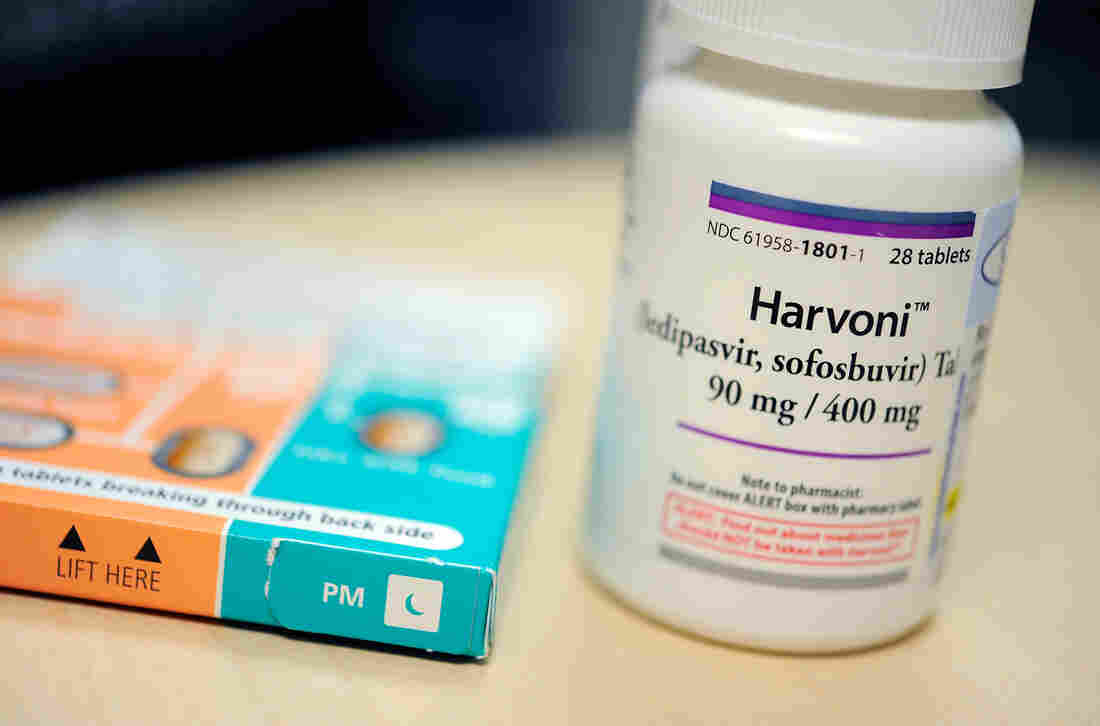 New drugs like Harvoni effectively cure hepatitis C, but they haven't yet been approved for use in children. Lloyd Fox/Baltimore Sun/TNS via Getty Images hide caption 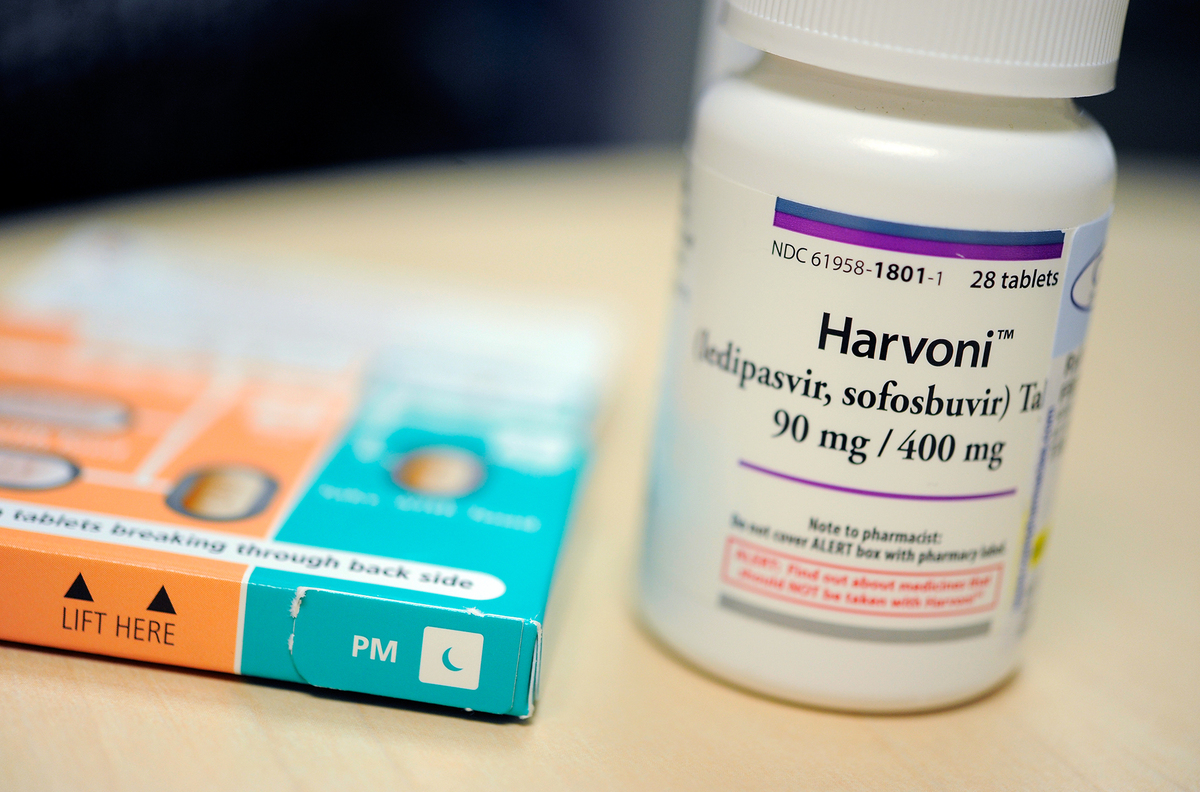 New drugs like Harvoni effectively cure hepatitis C, but they haven't yet been approved for use in children.

Several times a month, Jessica Wen, a pediatrician specializing in liver diseases, has a teenager show up at her clinic at the Children's Hospital of Philadelphia with an unexpected diagnosis: hepatitis C.

Hepatitis C virus, or HCV, is the most common bloodborne infection in the U.S. and a leading cause of liver failure and cancer. Injection drug use is a common risk factor, as is receiving a blood transfusion before 1992. But some of the teens Wen sees picked up the illness another way: at birth, from their mothers.

"I have diagnosed moms after diagnosing the kids," Wen says, referring to mothers who have hepatitis C, didn't know it and then passed it to their babies during childbirth. Wen estimates that about 1 or 2 of every 1,000 young children have chronic hepatitis C.

A study by the Philadelphia Department of Health points to what Wen and others in the medical profession see as a worrisome trend: Children with hepatitis C may be unaware of their diagnosis and the potential need for treatments down the road to prevent long-term liver damage.

Using city surveillance data, the study found that as many as 8 in 10 children at high risk for hepatitis C exposure in Philadelphia were never screened for the condition. More specifically, of the approximately 500 moms-to-be who were registered as having hepatitis C between 2011 and 2013, only 84 of their newborns, or about 16 percent, were tested for the virus by 20 months of age.

"Sixteen percent is really low," says Danica Kuncio, lead author of the study. "When you think about children, you hope that the number would be 100 percent, that it should be in the interest of every provider to be doing the best they can to get information to the next provider."

Kuncio, an epidemiologist with the city, worries that people who don't know they contracted hepatitis C as babies won't get the health care they need or realize they could spread the virus to others through blood-to-blood contact. It's a concern intensified by a rise in both injection drug use and hepatitis C among women of childbearing age, she said.

"It's a call to arms to figure out how we can do this better," said Dr. Michael Narkewicz, who specializes in pediatric liver diseases and hepatitis C at the University of Colorado School of Medicine.

Not so long ago, the lack of drugs to cure hepatitis C made screening less of a priority. But in 2013, the Food and Drug Administration approved the first of several drugs that effectively eliminate the virus. Now, with access to these expensive medicines, the condition has gone from chronic and debilitating to curable.

Narkewicz and others say the next frontier is to prove these treatments are safe and effective in children. Clinical trials are underway, and he thinks the drugs could become available for children in the next year or two.

But unlike HIV, which has safe and effective treatments that can dramatically reduce transmission of the virus from mother to child, "for hepatitis C, there are no treatments to prevent transmission in a mom or in a newborn," said Narkewicz.

Hepatitis C in children may be lacking attention for another reason: perinatal transmission rates are a lot lower for hepatitis C compared with hepatitis B and HIV. For every 100 babies born to women with HCV, 5 to 7 will contract the virus. Of those who do get it, 30 to 40 percent will clear it on their own before the age of 2, said Narkewicz. That's why the current protocols for children exposed to HCV call for monitoring and then screening them at 18 months with an antibody test.

But up to 15 percent of those born with HCV will develop a more aggressive form of the disease during adolescence, said Narkewicz, which can result in advanced fibrosis or liver scarring that can progress over time. "It's a small percentage, but it's still a real number," he said.

The medical community really hasn't done a good job of projecting the costs and benefits of early identification and treatment in children, according to Dr. Ravi Jhaveri, a pediatrician at UNC Children's Hospital in Chapel Hill, N.C.

A lot of research issues related to mother-to-infant transmission have "fallen by the wayside," Javeri says, as doctors have focused on other aspects of HCV.

"The old dogma was, why screen mothers if there's nothing to be done?" says Dr. Regino Gonzalez-Peralta, a pediatrician at the University of Florida Health System in Gainesville. He has been studying gaps in identifying children infected with hepatitis C and says that having new drugs to treat children will be a game changer.

While drugs to prevent transmission are not yet available, there are promising developments. "Now [that] we've got drugs that potentially might be useful in preventing maternal-fetal transmission," says Gonzalez-Peralta, "this is going to become a hotter area."

Another issue under debate is universal screening for the virus. Dr. Damien Croft, an obstetrician at Hahnemann University Hospital in Philadelphia, doesn't advocate it for everyone in the country. But he thinks it might be a good idea for his pool of patients. "There [are] enough women who are high risk for hepatitis C in Philadelphia that maybe we should consider doing that."

Croft also thinks it's important to improve communication between obstetricians and pediatricians so the pediatrician will know which children are at higher risk for having hepatitis C and can recommend screening.

In the meantime, Philadelphia's health department has begun working with health care providers and at-risk mothers in the city to improve the testing of infants born to women with hepatitis C, and when necessary, linking mother or child to specialists.

This story is part of a reporting partnership with NPR, WHYY's health show, The Pulse, and Kaiser Health News.