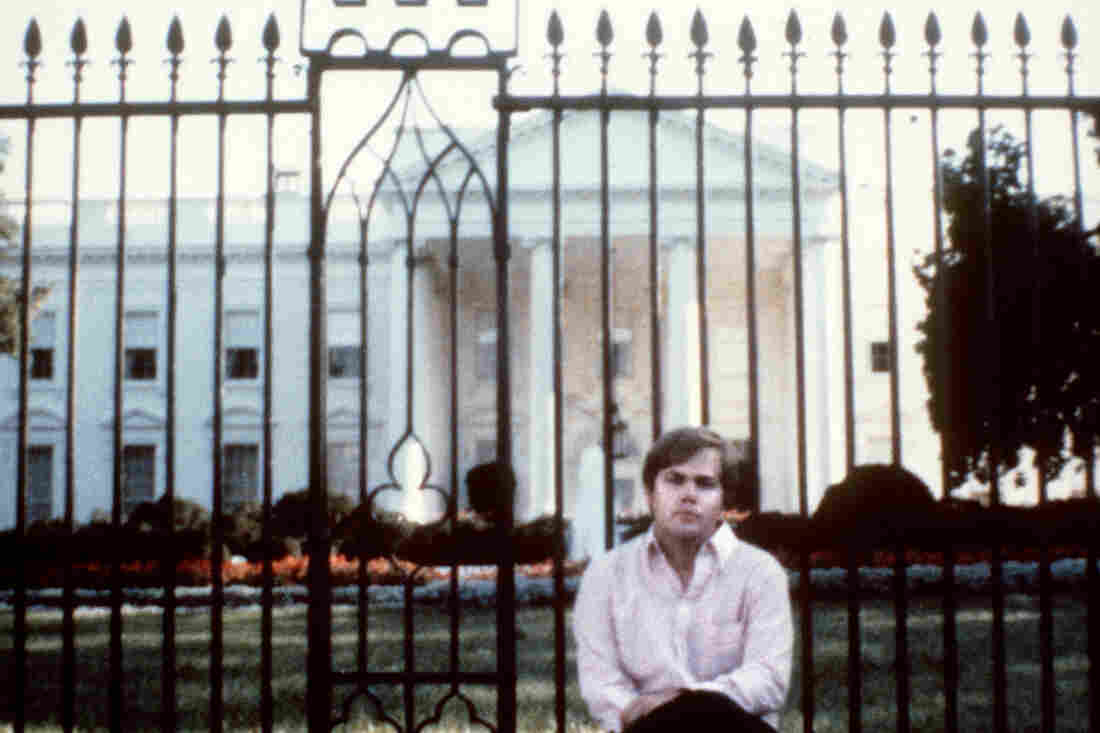 This undated photo was taken of John Hinckley Jr. in front of the White House. He attempted to assassinate President Ronald Reagan in D.C. on March 30, 1981. AFP/AFP/Getty Images hide caption 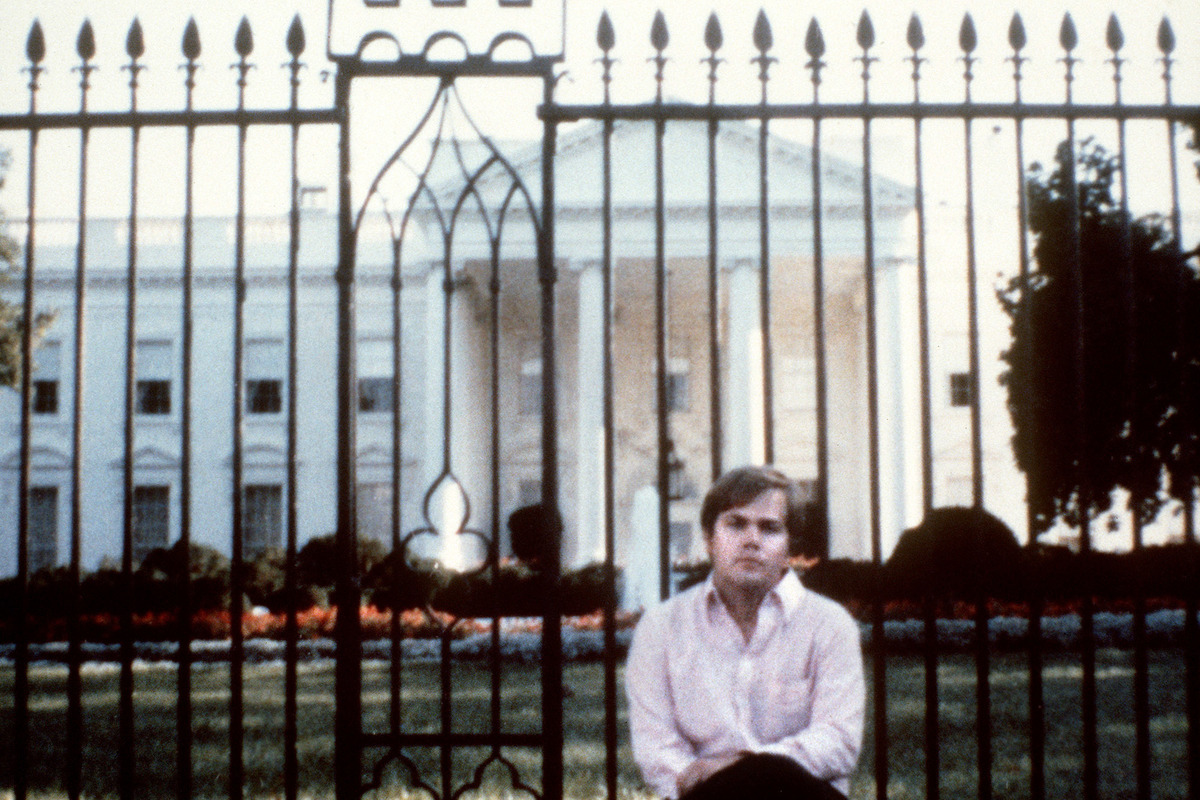 This undated photo was taken of John Hinckley Jr. in front of the White House. He attempted to assassinate President Ronald Reagan in D.C. on March 30, 1981.

The insanity ruling that sent President Ronald Reagan's would-be assassin, John Hinckley Jr., to a government psychiatric hospital rather than prison was handed down 34 years ago, but its repercussions still affect hundreds, if not thousands, of people who commit a crime and also have mental illness.

These consequences and the insanity defense itself were forced into the national spotlight again on Wednesday, when a federal judge said Hinckley would be released to live with his elderly mother in Williamsburg, Va.

Before attempting the assassination, Hinckley had grown obsessed with the movie Taxi Driver, in which the protagonist plots to assassinate a presidential candidate. He called and sent letters to Jodie Foster, one of the movie's stars.

In Hinckley's trial, there was no question that he was a troubled young man. The defense argued that Hinckley should not be held accountable for the shootings because he was suffering from a major depressive disorder and from schizophrenia. Prosecutors argued that he was sane and should be found guilty because he was only suffering from depressive neurosis and personality disorders.

To convict Hinckley for the assassination attempt, the prosecution had to prove the defendant was either not mentally ill, or if he was, that he could still appreciate the wrongfulness of his actions and conform to the law. A jury found Hinckley not guilty by reason of insanity.

Last year President Reagan's daughter Patti Davis told NPR that "the verdict of not guilty by reason of insanity was a bad verdict."

Decades later, the chances of winning an insanity defense are punishingly slim, according to lawyers and psychiatrists, especially for crimes like homicide. 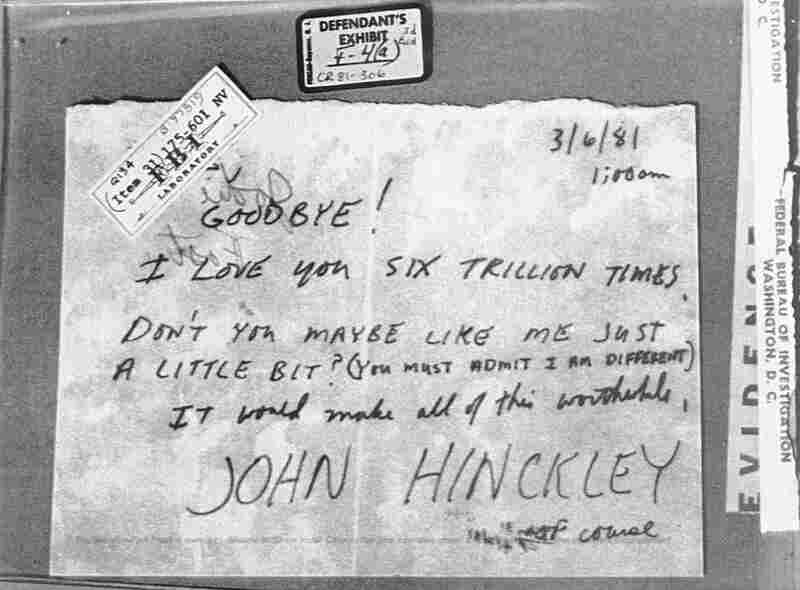 A note written by Hinckley to actress Jodie Foster just over three weeks before President Reagan and others were shot was used as evidence in his trial. Bettmann Archive/Getty Images hide caption 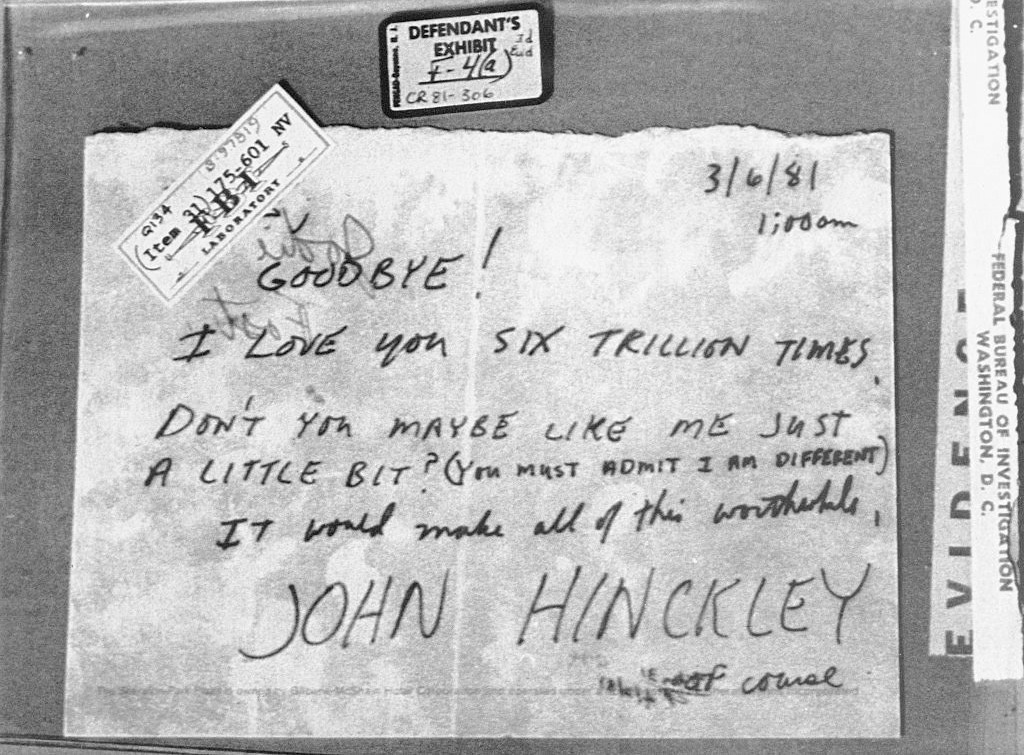 A note written by Hinckley to actress Jodie Foster just over three weeks before President Reagan and others were shot was used as evidence in his trial.

"There is a misperception that the insanity defense is frequently used and frequently successful," says Dr. Jeffrey Janofsky, president of the American Academy of Psychiatry and the Law. "There is a huge group of people with mental illness that commit crimes. They just don't meet the test" for insanity.

Even before the Hinckley verdict, people thought it was used much more often than it was. A 1981 study of Wyoming residents found people believed the insanity defense was raised in 43 percent of cases over a two-year period. In fact, only 102 defendants — less than 1 percent of all defendants — raised the plea, and only 1 of the 102 was acquitted.

The law has a long and complicated history with mental health. Even lords of state in 12th century England sometimes issued criminals pardons for "madness."

Today, the "not guilty by reason of insanity" plea exists to distinguish between those who break the law because of mental illness and those who do so with sound judgment. But as with Hinckley's case, assessing a defendant's mental health is difficult. It involves reading someone's mind at the time of a crime — often long after the crime was committed.

"You have to be capable of abstract thinking" to be considered of sound mind, says Jeffrey Smith of Greenville, S.C., who has served an expert psychiatric witness in insanity plea cases. "A psychiatrist doesn't have an X-ray that can show clearly someone has a broken bone.... it's a confusing situation for juries."

Defendants found not guilty are sent to institutions for mental health, where they remain until deemed safe to leave. Hinckley was housed at St. Elizabeths Hospital in Washington, D.C. Officials there argued that his illness had been in remission for decades and that he should be allowed to live in the community with restrictions.

If found guilty, those convicted go to prison, where most patients receive lower quality mental health care if they get it at all, psychiatrists say.

The tests for insanity vary by state. Most states rely on one of three different legal definitions of insanity with small customizations, according to Vanderbilt law professor Christopher Slobogin. 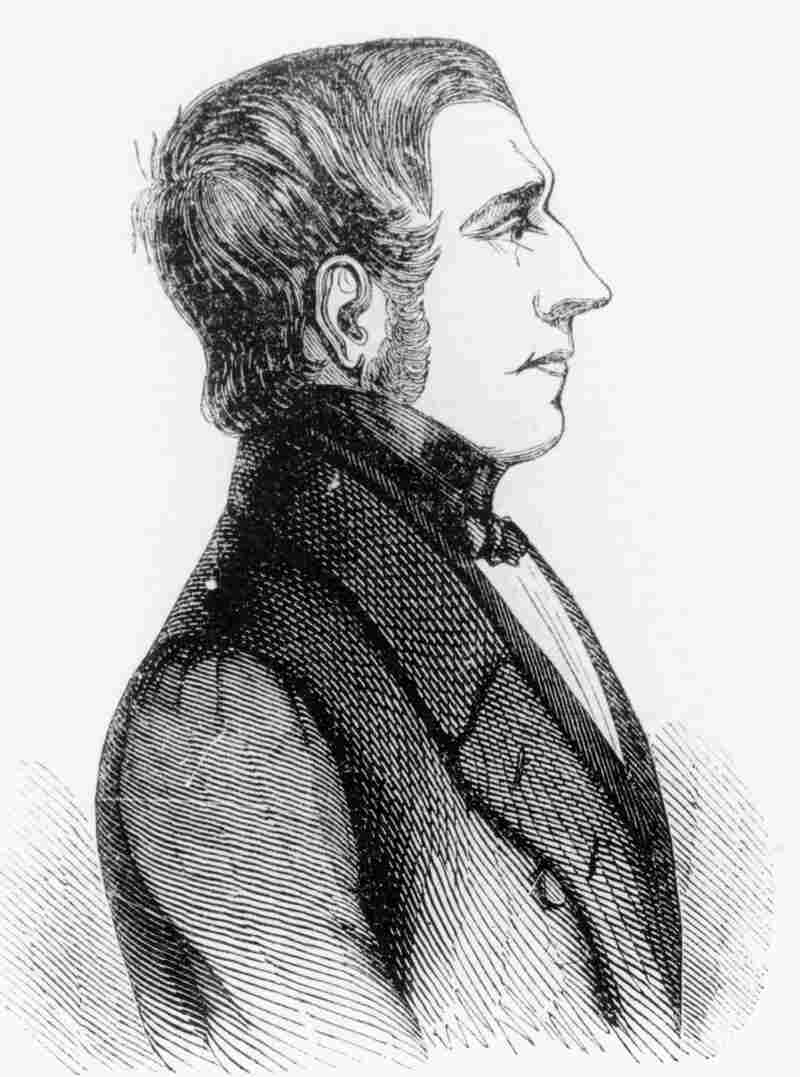 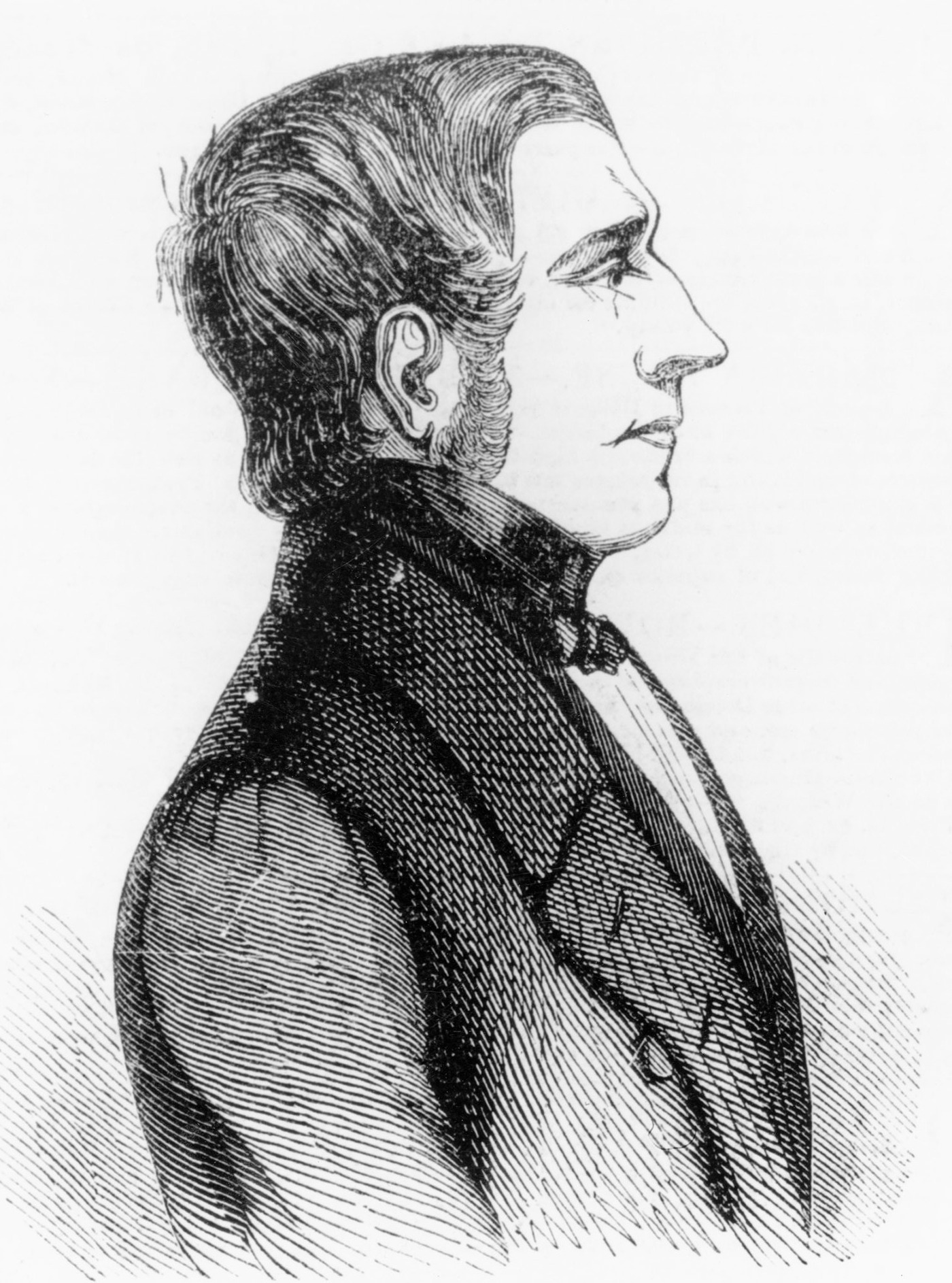 The oldest test for insanity, the M'Naughten rule (also spelled M'Naghten), comes to the U.S. by way of 19th-century England. The test finds someone insane only if he did not "know the nature and quality of the act he was doing; or if he did know it, that he did not know he was doing what was wrong." Roughly half of the states in the U.S. employ this test, as well as U.S. military courts.

Other states have turned to looser definitions of insanity. In 1871, the New Hampshire Supreme Court decided no one could be held criminally responsible for an act that was the "product of mental disease." New Hampshire and the U.S. Virgin Islands use this rule.

Most of the remaining states employ the American Law Institute's definition of insanity from 1955, a middle ground between the other two tests. The ALI definition exempts someone from punishment who lacks mental capacity to "appreciate the criminality of his conduct" or to "conform his conduct" to the law. It was under this definition that Hinckley was tried.

To the public, these definitions can seem pretty similar. But Stanford law professor Robert Weisberg says the varying tests can have real consequences for someone with delusions or bipolar disorder.

Take, for example, someone who believes voices from a higher power are telling her to kill someone, though she knows killing is illegal. Under M'Naughten, this defendant is guilty because she knows the legal wrongfulness of killing someone. But under Durham, she'd likely be found not guilty because the voices that caused her to commit a crime were the "product of mental illness." Under ALI, the decision might hinge on whether her urges to kill were so strong that she could not "conform her conduct" to the law.

These varying definitions carry the greatest consequence in states with the death penalty, which numbered 31 as of January 2016. Idaho, Montana, Utah and Kansas have no insanity defense and all have capital punishment.

Even in these states, a judge can take mental illness into account when sentencing, according to August Cahill, recently retired chief deputy of the Ada County Public Defender's Office in Boise, Idaho. But forensic psychiatrist Camille LaCroix of Boise says there's no guarantee someone with mental illness won't be sentenced to death.

LaCroix has joined a coalition formed by the American Bar Association and American Civil Liberties Union to ban the death penalty for mentally ill defendants in Idaho, part of a national initiative.

"You're violating their constitutional right to be adjudicated for a crime [they] have no idea that [they] did," LaCroix says of Idaho's lack of an insanity defense and its effect on the mentally ill. Defendants with mental illness deserve a chance to plead not guilty because of their illness no matter their state of residence, she says. LaCroix says trying defendants for cases they don't understand they committed violates their constitutional rights.