Accessibility links
The Costs Of The Pulse Nightclub Shooting : Shots - Health News Researchers are taking a look at the economic costs of the mass shooting at the Orlando nightclub. Meanwhile, those affected personally are fretting about their bills. 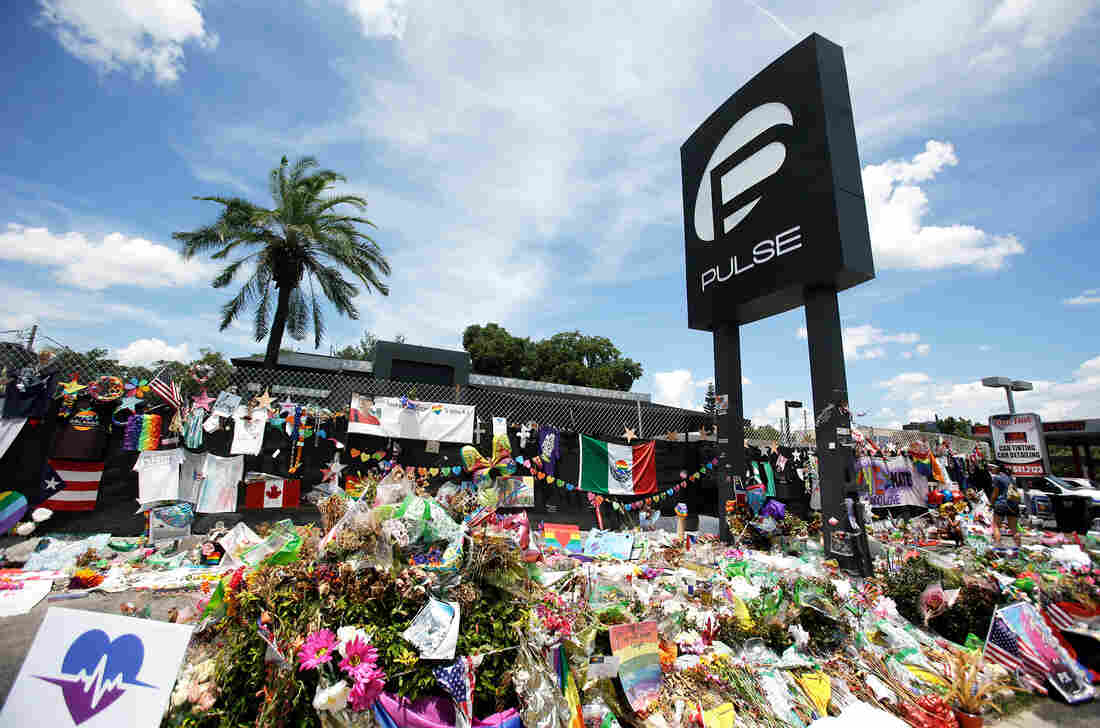 A makeshift memorial continues to grow outside the Pulse nightclub in Orlando, Fla., on July 11, one month after the mass shooting at the club. John Raoux/AP hide caption

A makeshift memorial continues to grow outside the Pulse nightclub in Orlando, Fla., on July 11, one month after the mass shooting at the club.

Mario Perez lives in Miami, but he was in Orlando for a housewarming party Saturday, June 11. After the party, the 34-year-old went to the Pulse nightclub for Latin night.

"And the minute he started shooting, I got hit from the side, I got grazed by a bullet," Perez says. "My first instinct was to fall to the floor, that's what you're taught to do."

He heard gunshot after gunshot after gunshot — too many to count. But then there was a brief break in the firing, and Perez ran out the back of the club. He hid inside the kitchen of a nearby 7-Eleven until police and paramedics showed up. He was taken to Orlando Regional Medical Center, and was at the emergency room from 3 a.m. until 8 a.m.

The gunshot wound on his side is purple and swollen, and he has nerve damage from the bullet fragment. He cut his elbow from glass on the floor of the nightclub and needed six stitches. Perez doesn't know how much bills coming from specialists, X-rays and tests might cost him. But his bill from Orlando Regional Medical Center's emergency department is $20,000.

Perez has no health insurance. He's working for a temp agency right now and doesn't have the money to be seen by a doctor for follow-up care in Miami.

So just how much will the Pulse nightclub shooting cost all of the victims? It's a difficult, if not impossible question to answer right now. At last check, 56 people had been brought to the hospital, including three patients who spent two weeks in the intensive care unit, and one patient who is still in the hospital in critical condition.

Embry Howell, a senior fellow at the Urban Institute, a think tank in Washington, D.C., studied the average cost of a gunshot victim in 2010. Using that benchmark, she estimates the hospital costs from the Pulse shooting will be about $1 million.

"And I would imagine that would be an underestimate," Howell said.

Howell said many of the victims may be in the same boat as Mario Perez: uninsured.

"They're young, primarily Latino and living in Florida," she says, a state that has not expanded Medicaid to its population.

"My guess would be you have a high rate of uninsured," she concludes.

Ted Miller, a researcher with the Pacific Institute for Research and Evaluation, has been studying the cost of firearm injuries for more than two decades. He used the 2011 shooting of former U.S. Rep. Gabby Giffords and 18 others in Arizona to make what he calls a conservative estimate: $4 to $7 million in medical costs and mental health costs for victims and survivors of people who died.

That's lifetime medical costs for the survivors, the costs of surgery and rehab — but it doesn't count long-term costs for those who are severely injured.

"They said some time ago that there were six people in ICU who would have longtime, serious consequences," Miller said. "And my guess is most of those folks will have traumatic brain injuries that will have continuing lifetime care."

Miller also makes a broader estimate beyond just the medical costs. That includes the cost of the police response, the cost to employers — and the dollar value of those 49 lost lives.

"I estimate that the total cost of the Orlando shooting is around $385 to $390 million," Miller says. "To put that in context, on that same day, the cost of other gunshot wounds in the U.S. was probably about $600 million. So about 1 1/2 times the cost of the Orlando incident. That tells you that there are a lot of people killed and injured by firearms every day in this country," he says. And, he explains, "Suicide deaths account for the largest share of gun violence costs."

Miller's $385 million estimate doesn't include the cost of mental health counseling for people who were in the club but not physically shot — and friends and family of those there. And then there's the cost of fear: people being afraid to go out to a dance club, or maybe skipping a visit to the theme parks.

Orlando Regional received 44 of the shooting victims. A hospital spokeswoman says some patients have insurance coverage, some don't. The hospital is going to look for payment sources from the community or the state, such as victim funds that are raising money across the country. But she says the hospital expects unreimbursed costs of more than $5 million.

Pulse shooting victim Mario Perez is calculating his personal costs. He's worried he's going to lose his job. He's anxious knowing millions of dollars have been raised to help victims, but his bills are arriving now. He started his own GoFundMe campaign, but it's only raised about $600.

This story is part of a reporting partnership with NPR, Health News Florida and Kaiser Health News.