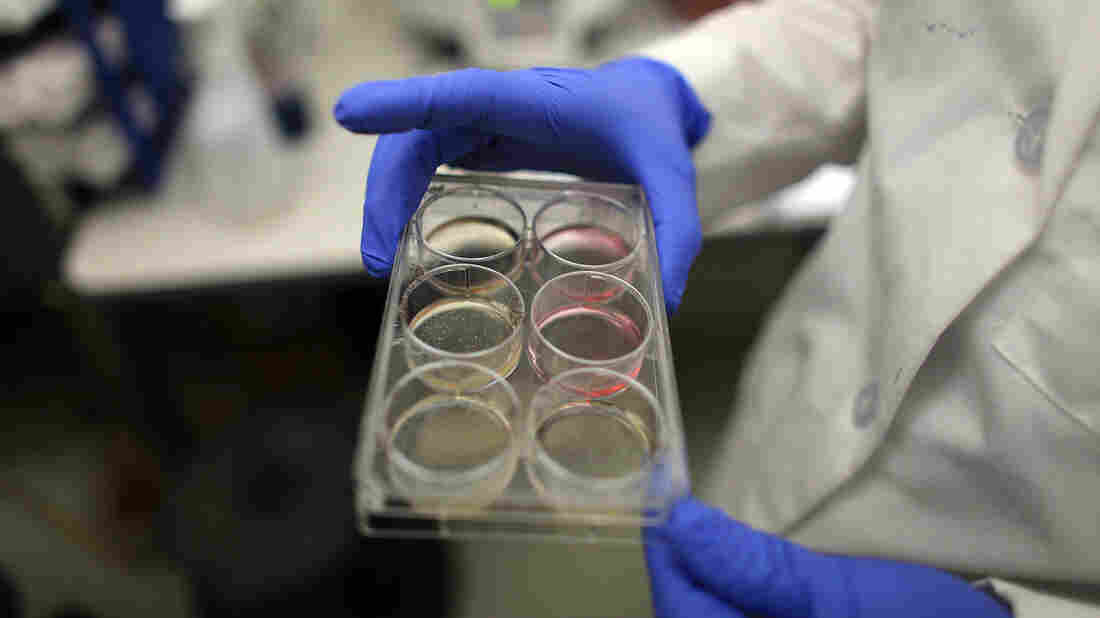 In this file photo, a professor holds a tray of stem cells at the University of Connecticut. The NIH plans to lift a moratorium on funding studies using human stem cells in animal embryos. Spencer Platt/Getty Images hide caption 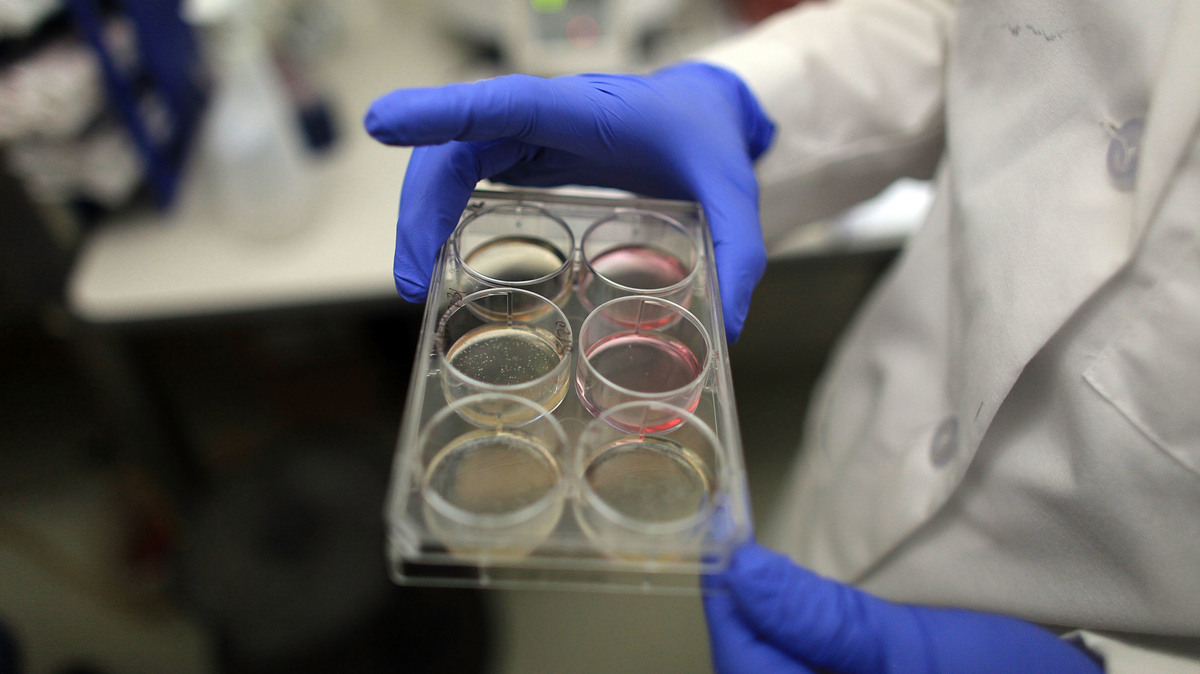 In this file photo, a professor holds a tray of stem cells at the University of Connecticut. The NIH plans to lift a moratorium on funding studies using human stem cells in animal embryos.

In Greek mythology, the Chimera is a monster that is part lion, part goat and part snake. Far from reality, sure, but the idea of mixing and matching creatures is real — and has ethicists concerned.

That's because last week, the National Institutes of Health proposed a new policy to allow funding for scientists who are creating chimeras — the non-mythological kind. In genetics, chimeras are organisms formed when human stem cells are combined with tissues of other animals, with the potential for creating human-animal hybrids.

Since September, the NIH has had a moratorium on funding these types of studies in order to consider the ethical implications of creating animals that could possibly have human organs. On the other hand, advocates say research could help scientists better understand human diseases and find new ways to treat illnesses.

To better understand all of the ethical issues at hand, All Things Considered host Ray Suarez spoke with Insoo Hyun, a professor of bioethics and philosophy at Case Western Reserve University.

On reasons why ethicists are concerned about this type of research

One very large area of concern is animal welfare. We don't know exactly what effect, in terms of animal suffering, these experiments will result in. That's one.

There's also great concern about the level of human-animal mixing that might result in animals that are not 100-percent animal and not 100-percent human. We may be flirting with an area of human dignity that we just do not want to cross, even if the scientific value of the work may be quite high.

I am a general supporter of this kind of research under certain conditions. Which is, that it has to be scientifically meritorious and that there must be no other way to do the experiment but with this particular approach. So I really take it on a case-by-case basis — understanding that people are very concerned, and legitimately so.

On discoveries so far

In Search For Cures, Scientists Create Embryos That Are Both Animal And Human

One experiment that happened recently was when researchers put human glial cells, which are a type of human brain cell, into mice. They found that the mice were able to solve maze tests twice as fast as normal mice and had memory tests that were twice as fast.

So that's an area that in recent years has drawn some attention, and could be sort of a harbinger for the kinds of concerns people have as you go outside of rodent and go to more complex, more human-like animals.

I think that is the root of many people's concerns. There's this idea of creating something completely new and, in some people's view, completely unpredictable. I will say though that this [is] research that has to be monitored very closely institutionally by oversight committees. They'll never allow a chimeric animal to roam the Earth and leave the laboratory.

But overall, I think the theme is the same. When you have a new ability technologically, it raises lots of new uncertainties of what to do with this ability.

On similarities between this and the abortion debate

It is part of the continuum of debates. I think we have a continuum of beliefs and principles and ideas of what it means to be a human — not everybody agrees. But this is definitely butting up against that continuum, because we are talking about embryo research and human cells.

On how review boards determine what crosses the line

Review boards do have a track record and a history of overseeing both 100 percent human embryo research and also animal research. So they'll have to find some chimeric approach, if you will, to this area. And so I think this is a work in progress.

In an earlier Web version of this story, our guest incorrectly said the National Institutes of Health is now allowing the transfer of human stem cells into nonhuman embryos. In fact, the NIH has simply proposed a policy that would allow funding for such research.