Accessibility links
Doctors Find 'Overdose Syndrome' Marked By Low Blood Pressure : Shots - Health News As doctors and nurses learn more about what the body goes through during drug use, they are changing the treatment they provide for patients on heroin and other drugs. 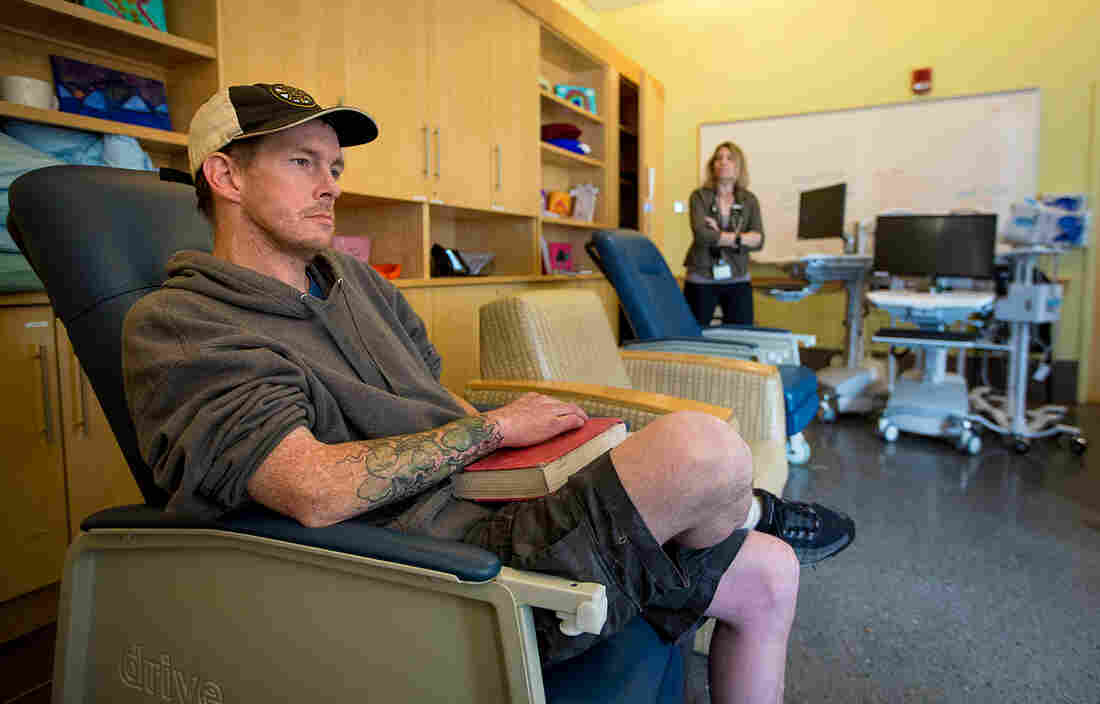 Tommy, a repeat patient at the Supportive Place for Observation and Treatment in Boston, says the room has saved lives. Jesse Costa/WBUR hide caption 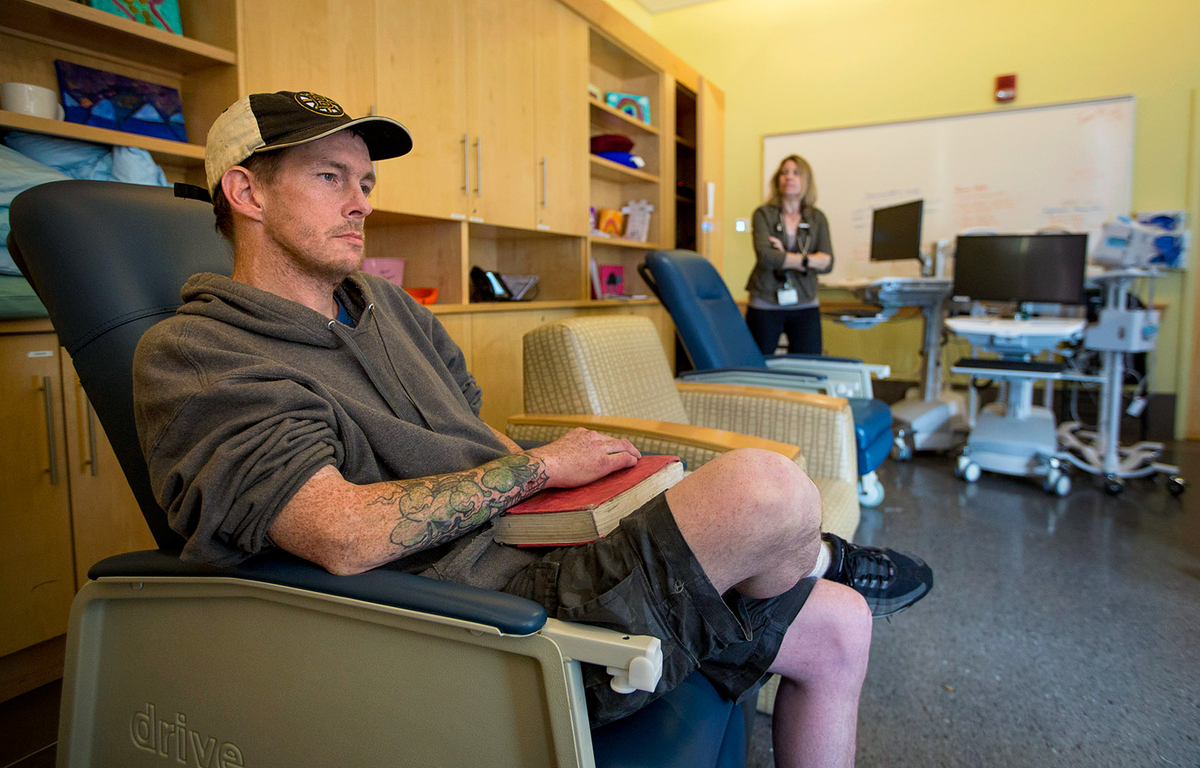 Tommy, a repeat patient at the Supportive Place for Observation and Treatment in Boston, says the room has saved lives.

Some arrive on their own, worried about what was really in that bag of heroin. Some are carried in, slumped between two friends. Others are lifted off the sidewalk or asphalt of a nearby alley and rolled in a wheelchair to what's known as SPOT, or the Supportive Place for Observation and Treatment, at the Boston Health Care for the Homeless Program.

Nine reclining chairs have been full most days, especially during peak midday hours. It may be the only room in the country where patients can ride out a heroin or other high under medical supervision.

"It's a safe place to be," says Tommy, 39, who's been using heroin for at least 21 years. "It's a lot safer than being out on the street, possibly walking into traffic. I might OD if I was alone out there."

Tommy is looking for a job and housing, and we've agreed not to use his full name. He's one of 180 people who've come to this former conference room to ride out an opioid or other drug high since SPOT opened in late April. Nurses have logged almost 900 visits. At least half of the patients have come more than once.

If the person can speak, a nurse will ask what they took before settling them in a chair, wrapping a blood pressure cuff around one arm and placing an oxygen monitor over a finger.

"The monitors are really convenient," Dr. Jessie Gaeta, chief medical officer for BHCHP, says as she pulls the Velcro edges of a blood pressure cuff apart. "It takes a lot of the guessing out of understanding how far someone is into an overdose syndrome."

Gaeta coined the term "overdose syndrome" to describe what's happening to patients in this room. In many cases, she is surprised by what she's seeing.

"A classic opiate overdose is characterized by a person who stops breathing," Gaeta says. "They have central nervous system depression. So it's mostly respiratory depression and respiratory arrest."

But Gaeta says about 75 percent of her SPOT room patients show something different. "What we're seeing in this room is more depression of heart rates and blood pressures as actually the primary — sometimes the only — abnormalities," Gaeta says. So the patient may be unconscious with low blood pressure, but have nearly normal breathing. 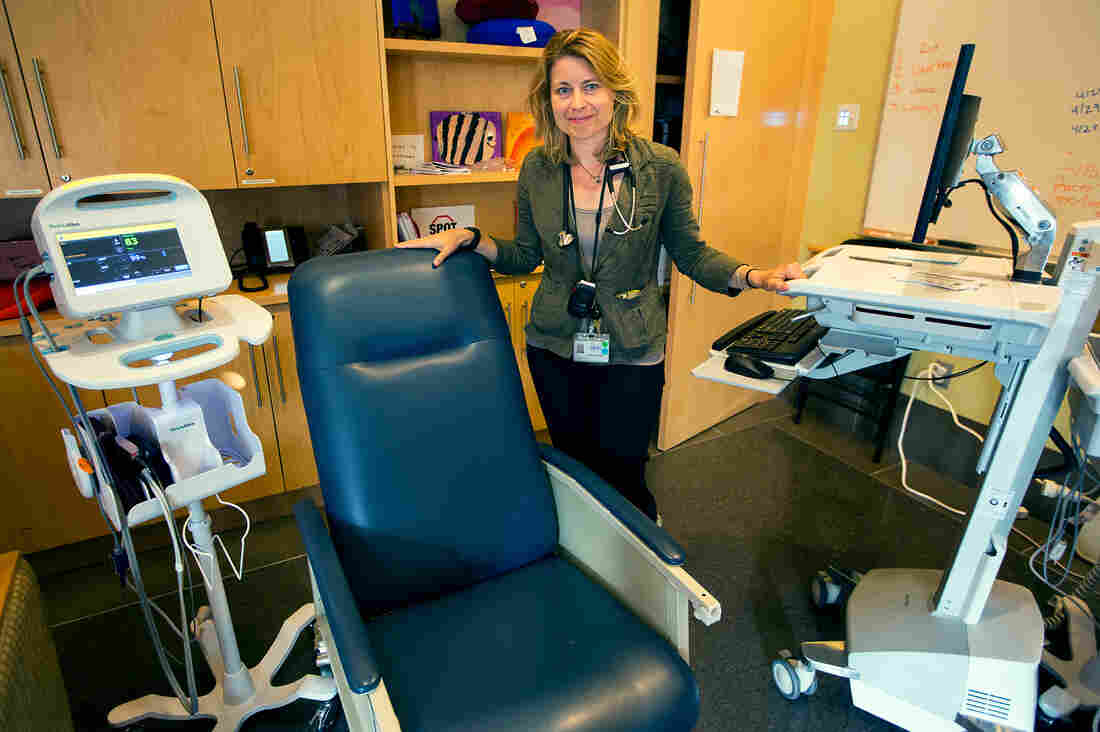 Dr. Jessie Gaeta, chief medical officer of the Boston Health Care for the Homeless Program, stands at a setup where heroin users would be monitored while riding out a high. Jesse Costa/WBUR hide caption 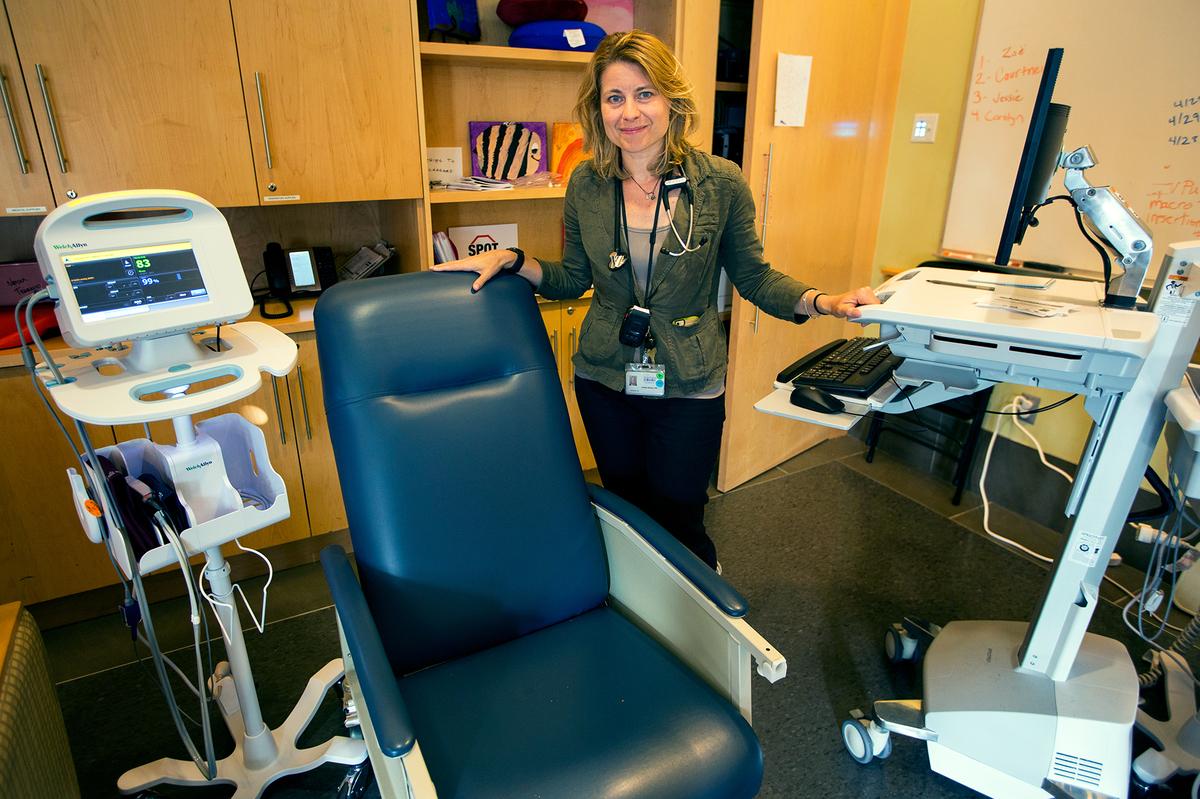 Dr. Jessie Gaeta, chief medical officer of the Boston Health Care for the Homeless Program, stands at a setup where heroin users would be monitored while riding out a high.

Patients tell Gaeta they may start the day with heroin or another opioid and then, a few hours later, take pills that will enhance the high.

"People are talking about that a lot here," Gaeta says, "about the layering of this cocktail of medications, and that's really reflected in the vital signs that we're seeing, which is not indicative of pure opiate overdoses. I'm not sure that we'd have seen that without doing this kind of monitoring."

Gaeta describes a typical combination or cocktail of four drugs: heroin or another opioid, clonidine (which lowers blood pressure), Klonopin (to control for anxiety) and gabapentin (used to treat seizures or nausea).

The observations are just a snapshot based on a small number of addiction patients in one area of Boston. But what Gaeta is seeing is reflected in overdose death reports and is changing the way she and her staff respond to these patients who look like they are falling into a deep sleep. To boost sinking blood pressures, for example, they've brought IV fluid equipment into the room. They are going through many more tanks of oxygen than expected.

Dr. Barbara Herbert, president of the Massachusetts chapter of the American Society of Addiction Medicine, says she's never heard anyone use the term "overdose syndrome."

"But I think it's a great phrase, and I suspect it will move into more conversations. Because we created a safe space, we can now think about what's in front of us with more science than we could before we had this," she says. "So, while all of us knew this cocktail could produce overdose, few of us have ever had the opportunity of seeing people after they use and monitoring their blood pressure or their heart rate. So, this is an unexpected positive for us, coming to understand the disease better from that safe space."

SPOT nurse April Donahue says some patients in the room appear so sedated that they don't respond when she speaks loudly in their ear or raps on their sternum. But, she says, some of those people "have rock-solid vital signs, better than mine." So, she says, "What you see subjectively looking at someone and what their vital signs are don't always match up." 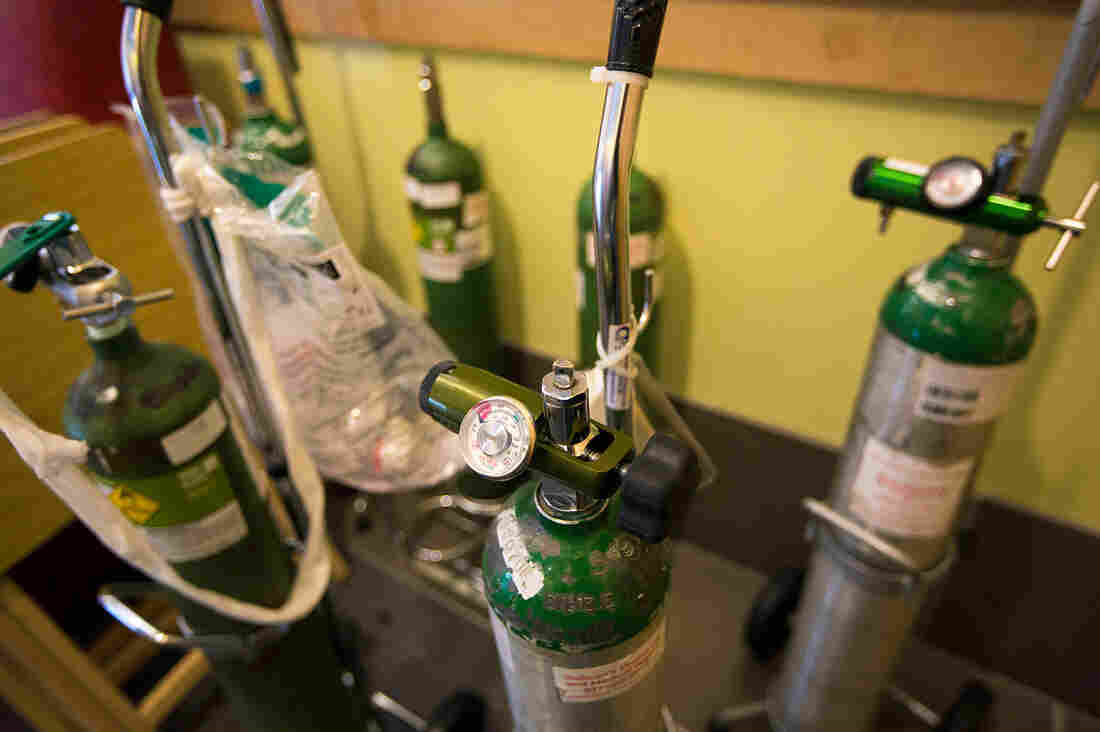 The facility is going through many more tanks of oxygen than expected because of what medical staff are learning about what's going on in the body while people are high. Jesse Costa/WBUR hide caption 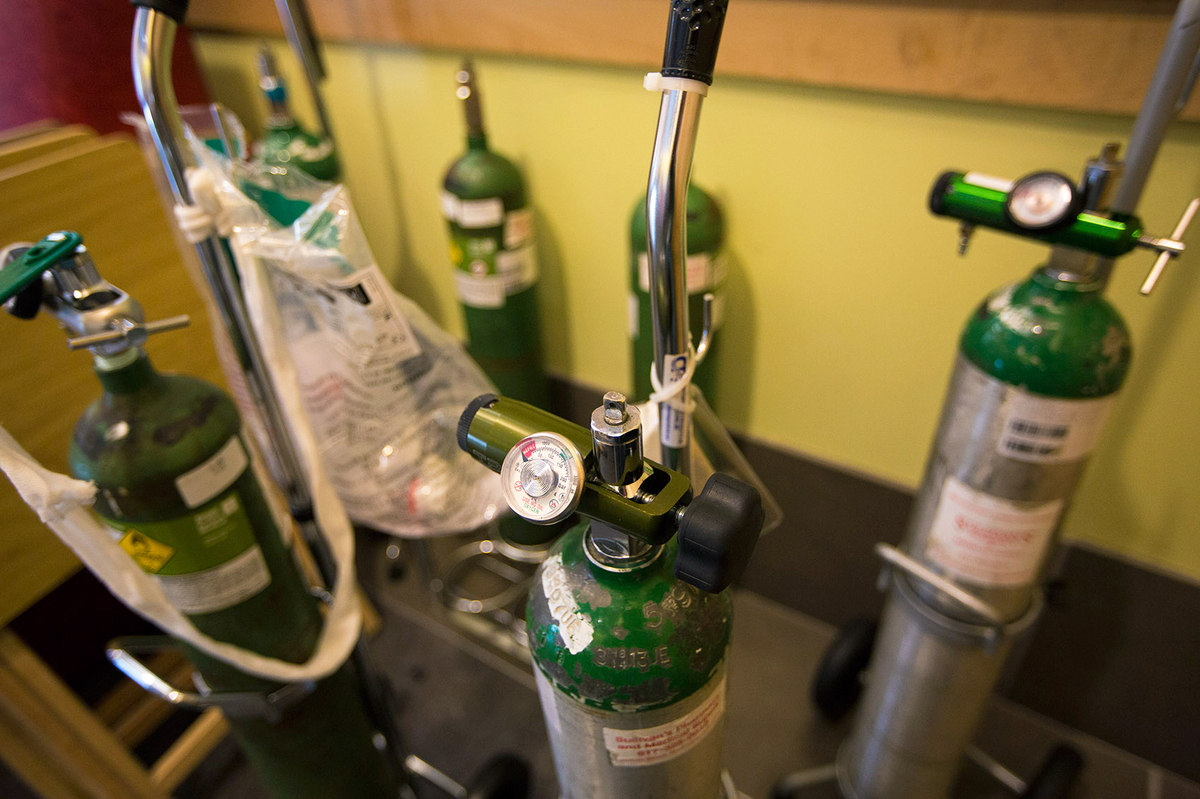 The facility is going through many more tanks of oxygen than expected because of what medical staff are learning about what's going on in the body while people are high.

If Donahue weren't monitoring the vital signs, she says, she'd be racing to inject naloxone, the drug that reverses the effects of opioids. But Donahue found she can sometimes avoid using naloxone, which is very harsh on the body, by giving patients oxygen or fluids to keep them alive.

The nurses speak to each patient about addiction treatment. Getting patients into treatment is their top priority after keeping people safe while high.

"I think what's struck me the most is the gratitude — just to get out of that environment, even for a little while, to get off the street and be cared for," Donahue says. "I mean, so many of our participants don't have anyone who's caring for them."

And Tommy knows. He went into respiratory failure a few weeks ago while at SPOT and was brought back with naloxone.