Accessibility links
Video: Lessons In Wound Healing From Our Favorite Fly, The Caddis Fly : Shots - Health News You may know the caddis fly as a fishing lure. But bioengineers hunting a better way to seal wounds and set bones say the larvae of these insects have a few tricks we should try to mimic. 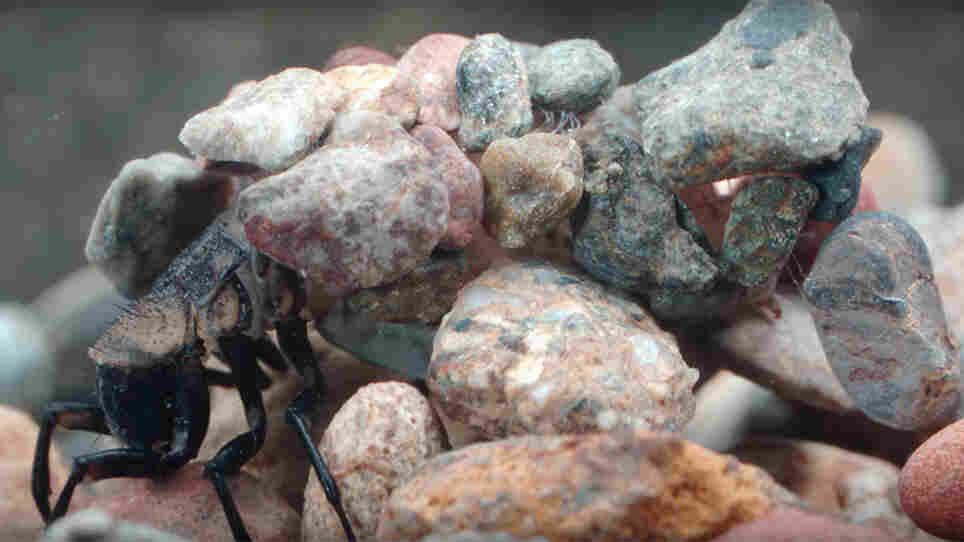 The underwater construction skills of the caddis fly larva have caught the interest of bioengineers. The larva tapes and glues pebbles together to form a sturdy protective case. Josh Cassidy/KQED hide caption 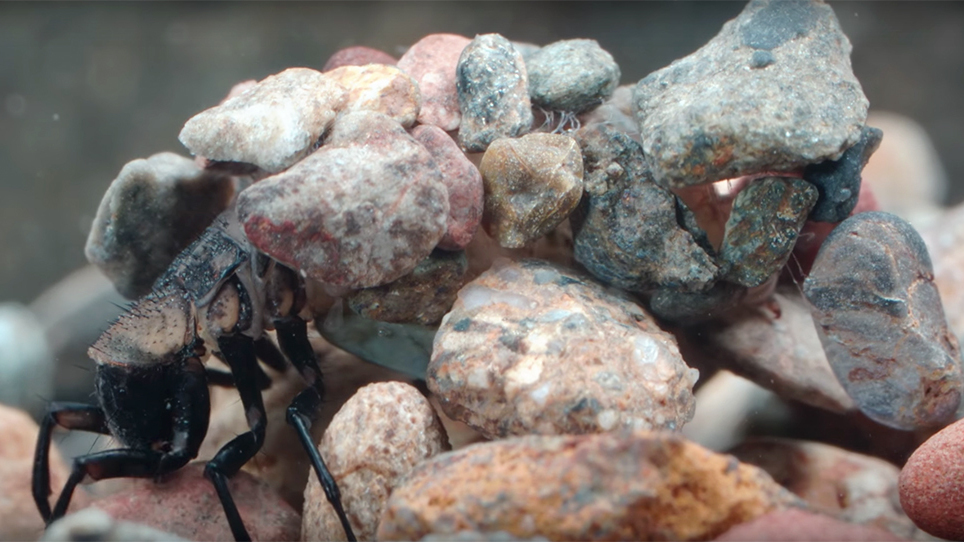 The underwater construction skills of the caddis fly larva have caught the interest of bioengineers. The larva tapes and glues pebbles together to form a sturdy protective case.

Instead of stitches and screws, doctors are looking to the next generation of medical adhesives — glues and tape — to patch us up. Their inspiration? Water-loving creatures like oysters, marine worms and the caddis fly, a type of stream-dwelling, fish-baiting insect that lives in creeks all across the United States.

The medical adhesives doctors use today work pretty well outside the body. Attach a "waterproof" bandage to dry skin, and it will stay put, for a time. And certain brands of liquid stickum, such as Super Glue and Krazy Glue, which employ compounds called cyanoacrylates, also resist degradation in water.

The challenge for mechanical engineers, however, is making compounds that will stick to things when they're already submerged.

"Typically we can make an adhesive bond that is stable underwater," says Nicholas Ashton, a doctoral student in bioengineering at the University of Utah. "But we can't form the bond underwater."

Humans are 60 percent water, and our insides are as fluid as fish tanks — hostile to chemical adhesives. So, doctors have traditionally used mechanical means to mend bones and sew up internal tissues.

"The second you go inside the body, it changes the ballgame entirely," says Ashton.

Enter the caddis fly, a stream-dwelling insect equipped with a homespun waterproof tape dispenser. In its larval stage, this industrious builder uses pebbles and its double-sided "tape" to construct a tiny, tube-like house, or "case," for itself — entirely underwater. The tape is really a specialized silk, extruded by a pair of glands under its chin.

Thanks to the qualities of that silk, the case not only holds up underwater, it is strong enough to protect the caddis fly's soft lower body amid forces many times its body weight.

"It's an extremely fancy tape," says Russell Stewart, a materials science engineer at the University of Utah, who studies caddis fly silk.

The case-building behavior begins as soon as the caddis flies hatch.

"And when they get to building, they are very selective," says Patina Mendez, an environmental entomologist at the University of California, Berkeley.

After carefully choosing a starter pebble for its case, the caddis fly meticulously tapes stone after stone together, as the case begins to take shape.

California is home to approximately 400 species of caddis flies, and there are some 15,000 worldwide, all of which use some version of the silk. 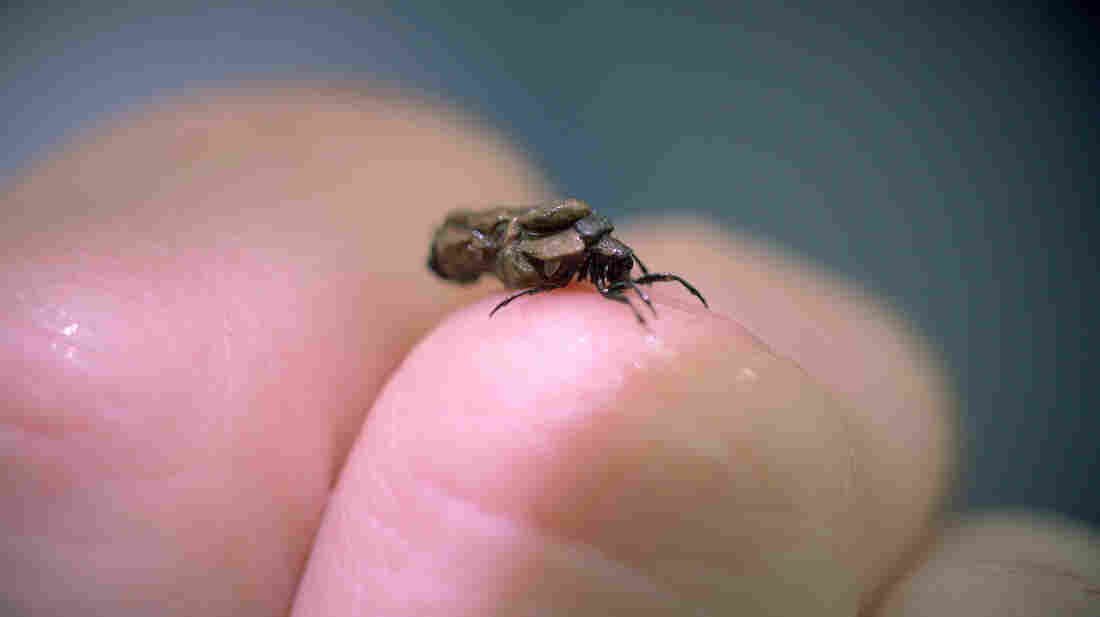 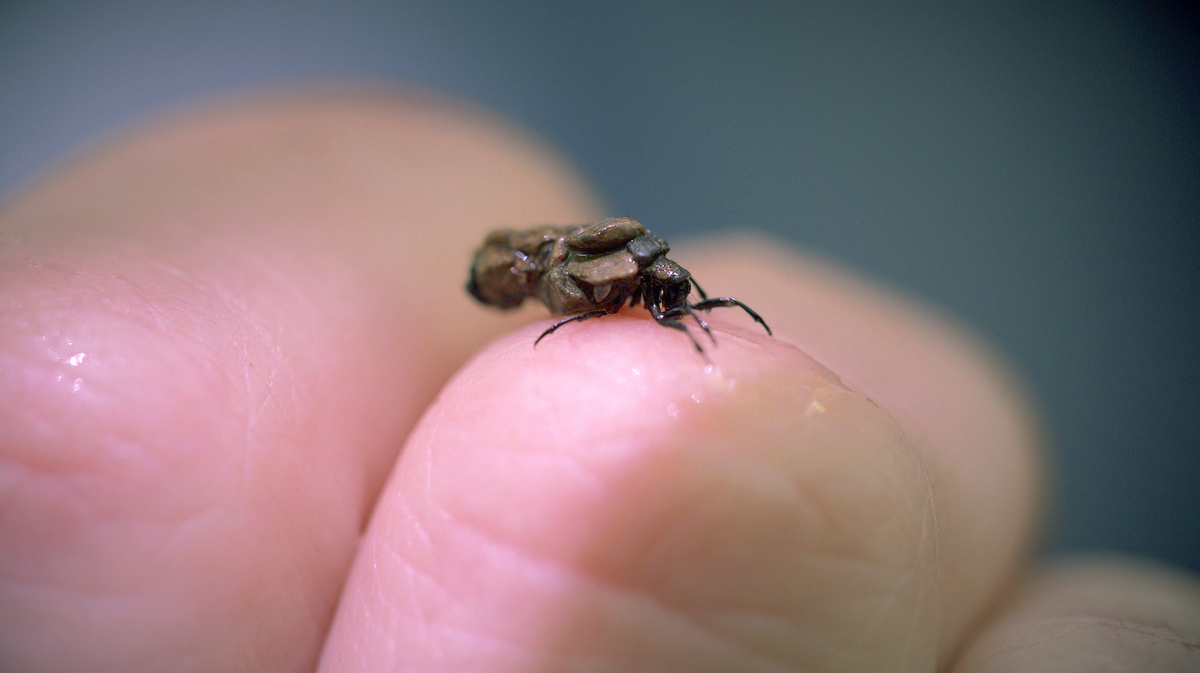 A caddis fly larva doesn't need its sticky tape to perch on a human finger.

Any tape, including this one, has two basic components, scientists explain: the flat ribbon, or backing, and the layer of sticky stuff, or glue. From the standpoint of materials science, caddis fly tape is extraordinary in both departments.

Though its mechanism still isn't fully understood, the sticky part of the tape forms highly complex bonds, both chemical and physical, with whatever it adheres to. As these bonds form, they displace the water where the tape meets the stone, allowing the two substances to stick together.

Interestingly, unlike most glues, which tend to work better on clean, dry surfaces (like skin), the glue of the caddis fly bonds more readily to biofouled surfaces — those already coated with decaying matter and bacteria from the stream.

The scientists say this fly's adhesive system is distinct from that of other well-studied underwater glue-makers, such as mussels and sea cucumbers, and may offer a very different path forward for researchers trying to engineer an underwater fixative.

As for the ribbon component of caddis fly silk, it's resilient — like a rubber band. The fiber can stretch to twice its original length and still recover. But unlike a rubber band, caddis fly silk returns to its shape slowly. The tape fibers can absorb forces that would cause another material to snap back violently, Stewart says. 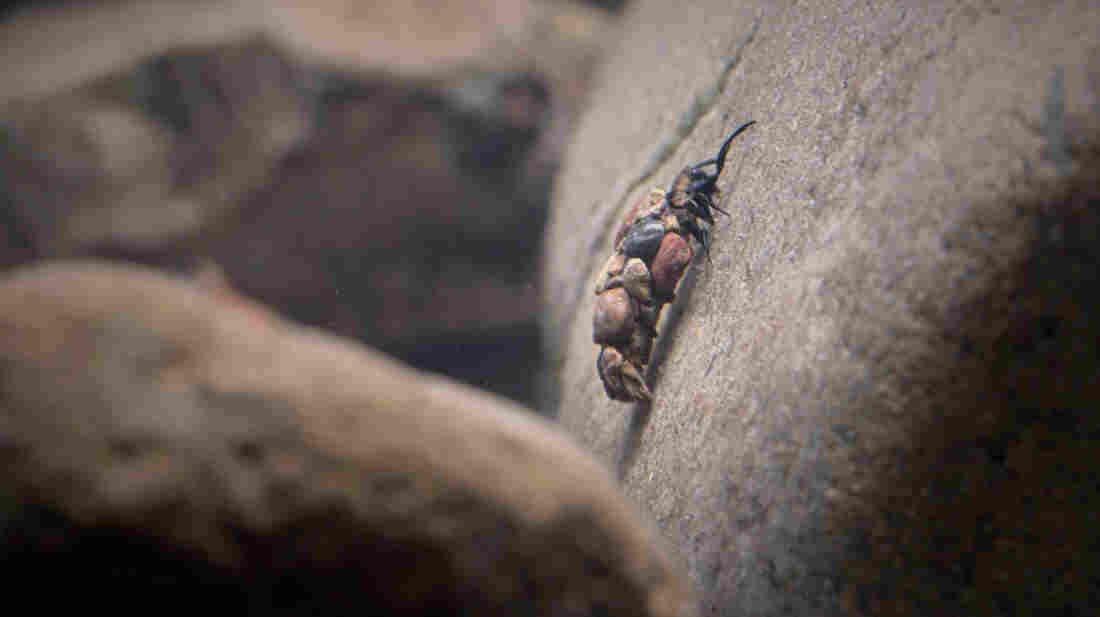 The pebbles of its case stay snugly in place, as the larva weathers steep climbs underwater. Josh Cassidy/KQED hide caption 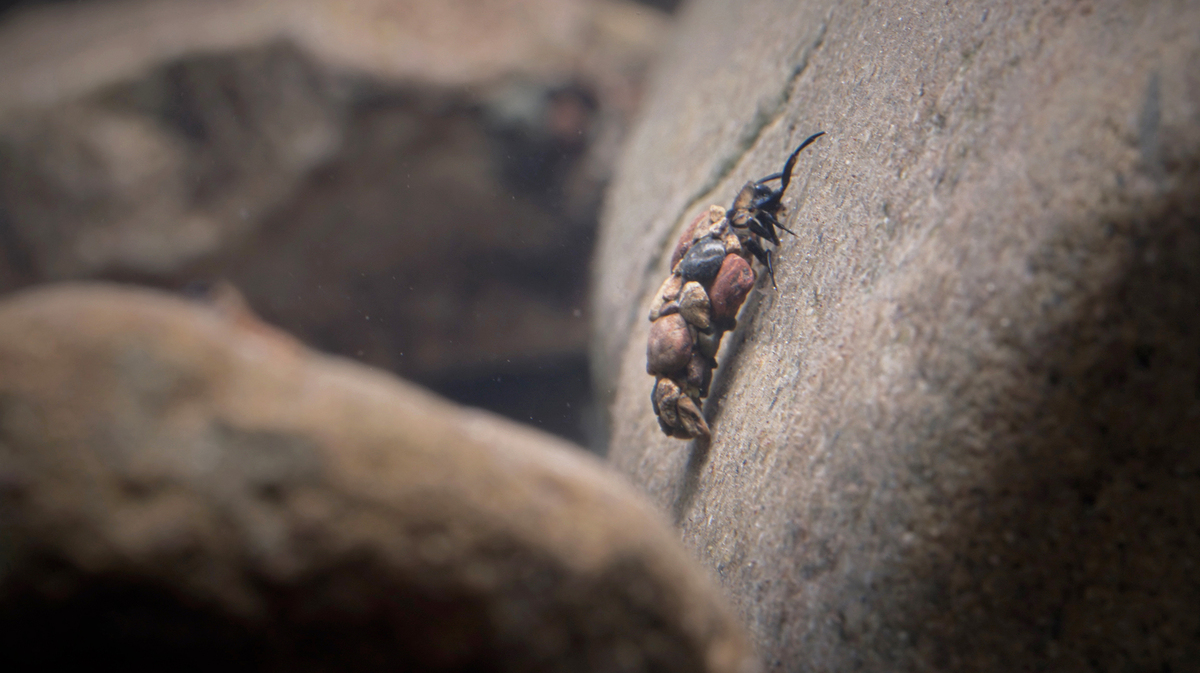 The pebbles of its case stay snugly in place, as the larva weathers steep climbs underwater.

Given the larva's challenging environment, that type of mortar makes its pebble case resilient, too. Stewart uses an earthquake analogy: "If you think about a house made out of brick or stone, it's brittle," he explains. "You don't want to live in a stone house in California! If you have an earthquake, it would break and fall down. But if the mortar were flexible, it wouldn't."

Compare that resilience to spider silk which, though mechanically stronger, isn't built to last. If an insect damages a spider's web, the spider has to make all new threads. (Spider silk also loses its remarkable elasticity altogether underwater.)

The ability to mimic caddis fly silk is only in its infancy. With the help of chemical models, Stewart and his colleagues have been able to reverse-engineer a primitive version of the glue component that went on wet in a watery setting, then solidified without losing integrity. One day, a similar compound might be used inside the body to mend soft tissues, like organs and tendons, and even repair hard ones — like teeth and bone.

Eventually, the caddis fly larva makes its case into a cocoon by sealing it up at the top with what's called a "hat stone," and reinforcing the inside with extra tape. That's when the insect larvae are most recognizable in the wild, Mendez says, because of their habit of gathering together.

"They line themselves up like little sleeping bags," she says.

Like its land-based cousins, butterflies and moths, from whom it diverged 250 million years ago, the caddis fly larva then undergoes a metamorphosis and emerges as a winged adult.

That's the form that most often captures the imagination of people.

"When I go give a lecture, I always ask, is there a fly-fisherman in the room?" Stewart says. "There usually is."

This post and video were produced by our friends at Deep Look, a wildlife video series from KQED and PBS Digital Studios that explores "the unseen at the very edge of our visible world." Lisa Potter contributed reporting.