Accessibility links
Puerto Rico's Efforts To Stop Zika Are Hampered By Mistrust : Shots - Health News Puerto Rico has more reported cases of Zika than many other places in the region, and the number of cases continues to rise. Unfortunately, Zika is just one of the island's many problems. 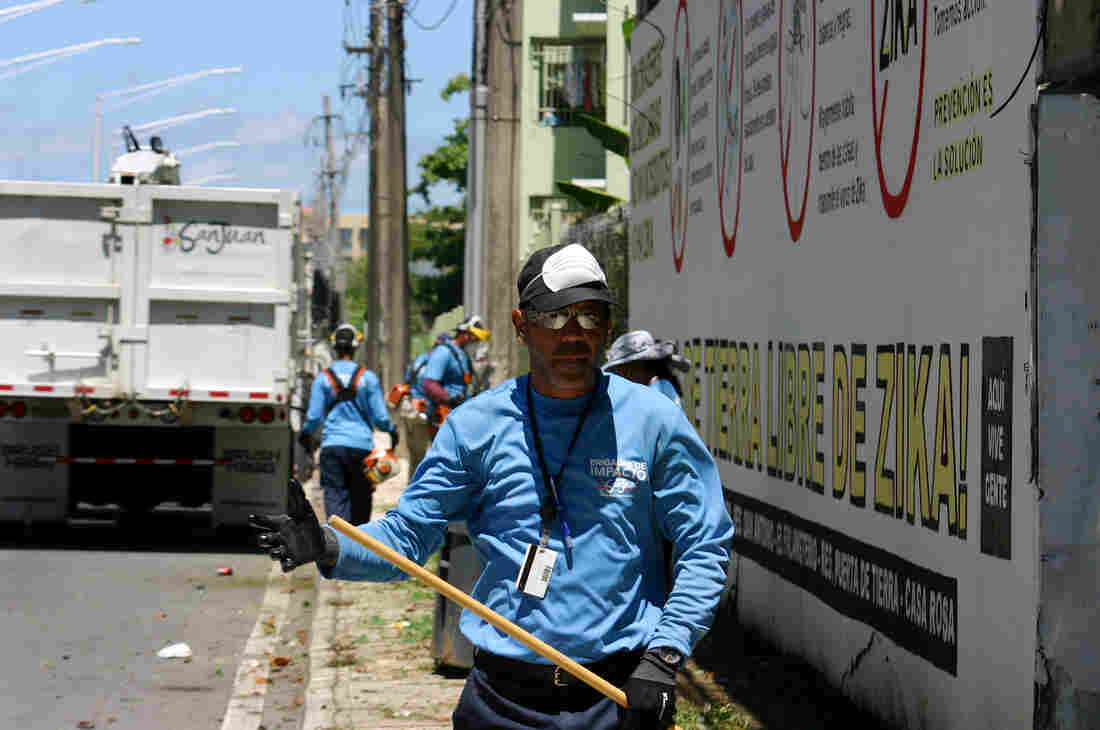 A city worker in San Juan, Puerto Rico, cleans up a vacant lot where mosquitoes could be breeding. Jason Beaubien/NPR hide caption 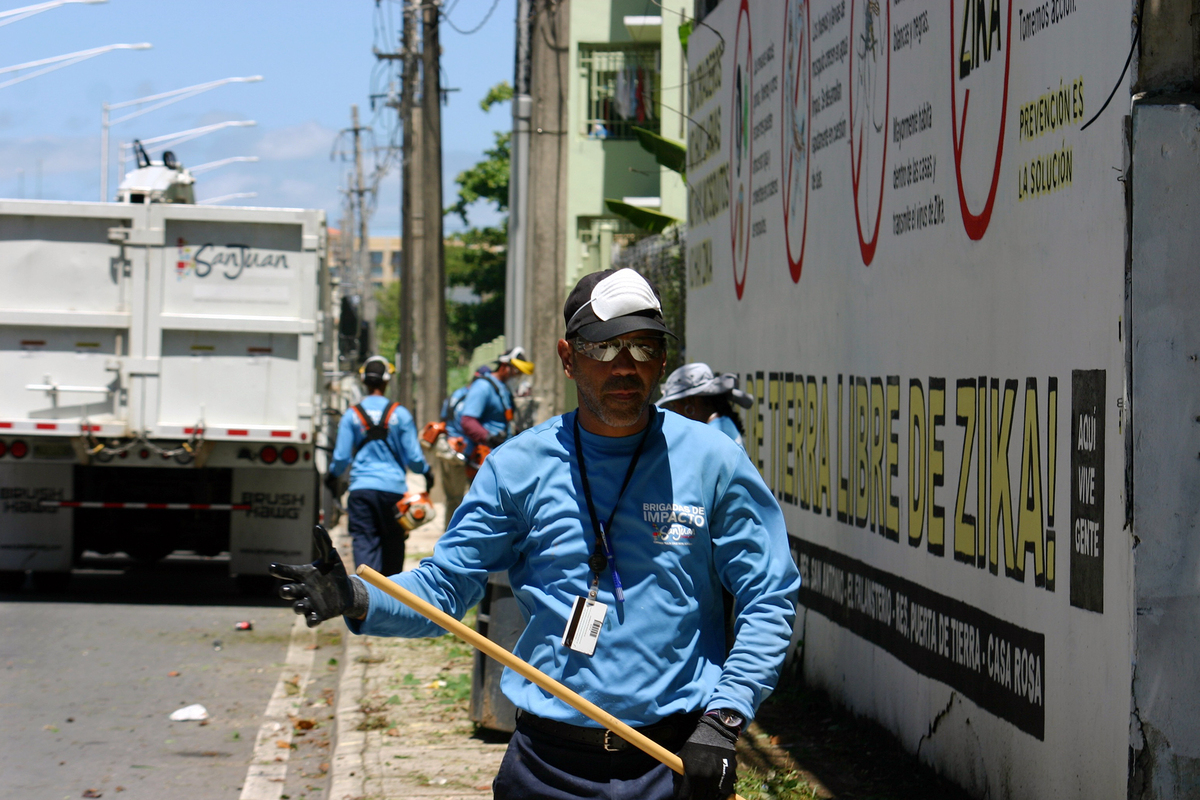 A city worker in San Juan, Puerto Rico, cleans up a vacant lot where mosquitoes could be breeding.

Puerto Rico is in the midst of one of the worst Zika outbreaks of any region in the northern hemisphere. The island has been reporting roughly 1,500 new cases of Zika each week. Hundreds of pregnant women are already infected, and public health officials say the outbreak in Puerto Rico probably won't start to subside until September or October.

Yet health officials also say efforts to stop the spread of the virus are being hampered by mistrust, indifference and fatigue among residents, over what some view as just the latest tropical disease to hit the island.

At a park in the San Jose section of San Juan, 58-year-old Umberto Antonio Guzman leans against a chain-link fence watching baseball practice.

It's just after sunset, but the tropical air is still hot and sticky.

Guzman says he knows about Zika, and adds that he should be worried about it — but he's not. He says this outbreak isn't as bad as when Puerto Rico got hit in 2014 by chikungunya, another tropical disease new to the island.

"The chikungunya was very strong," Guzman says. "A lot stronger than Zika. With Zika many people don't even have any symptoms."

Just a few weeks ago, Guzman's 15-year-old son, who's out on the baseball field playing third base, had a bad case of dengue fever.

Guzman shrugs and says Zika is just one more health problem people here have to deal with.

Puerto Rico had its first Zika case in December of last year. Since then, laboratories have confirmed nearly 9,000 more cases in the commonwealth and U.S. territory.

Health officials say the actual number of people who have contracted the virus is much higher. One sign that's true is that almost 2 percent of blood donations in Puerto Rico are now turning up positive for Zika.

The Centers for Disease Control and Prevention predicts that by the end of the year more than 20 percent of the entire population — or some 700,000 people in Puerto Rico — could be exposed to the virus.

"Among us scientists, it is scary," says Brenda Rivera Garcia, the state epidemiologist for Puerto Rico. She says this is the first time she's ever seen a mosquito-borne virus that's capable of crossing the placenta and causing major birth defects. In extreme cases, the virus is being linked to microcephaly in newborns. And then, as if all that wasn't bad enough, she says, Zika also turns out to be a sexually transmitted disease.

"This is something you would imagine if you were writing science fiction — but it's the reality," Rivera Garcia says. Even though, in some cases, the Zika virus causes only mild symptoms, or none at all, she says, it's clear that's not true for everyone. "We know that there are serious consequences for some in our population."

Yet it's difficult to get many people in Puerto Rico to pay attention to the risks, she and others working to curb the damage say. 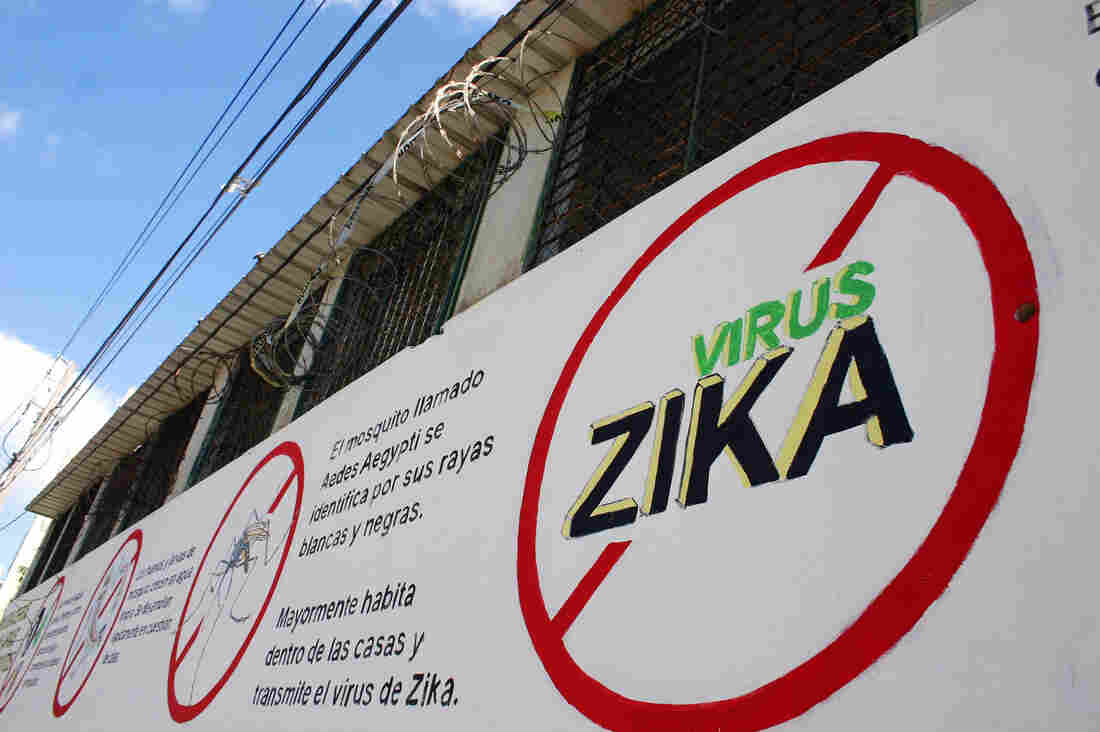 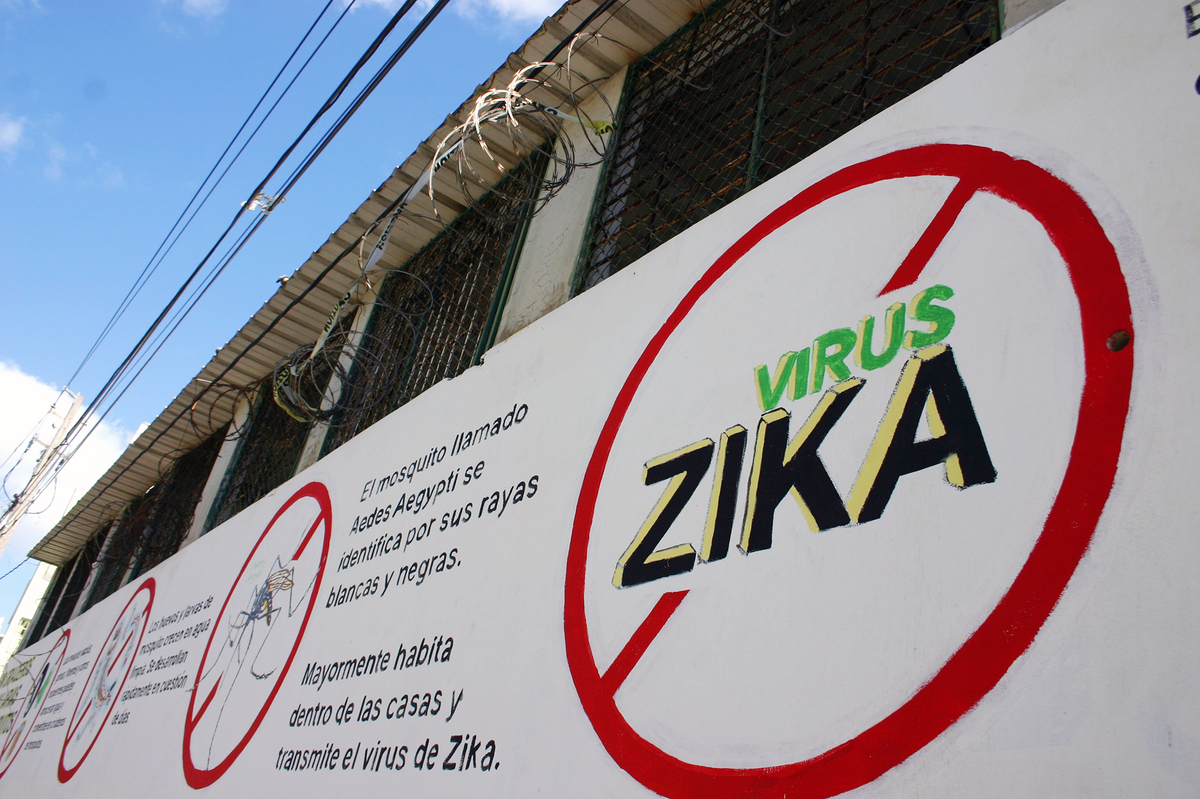 A mural in the Puerta de Tierra section of San Juan warns about Zika.

"Zika is a problem and we are aware of it," says Hiram Torres Montalvo, a public interest lawyer and the co-founder of Puerto Rico Limpio, a citizens' action group that aims to clean up environmental hazards in Puerto Rico. Torres has been trying to raise awareness about mosquitoes spawning in open landfills. But he says sometimes people in the commonwealth just don't have time to think about Zika.

"We have so many problems in Puerto Rico," Torres Montalvo says. "Our economy is bad. We have a lot of crime, a lot of social issues, public debt, problems with the government. I think that we are so overwhelmed by all the problems that we have in Puerto Rico, that maybe we don't pay as much attention as we should to the Zika situation."

One thing that did get a lot of attention recently, in regards to Zika, was a plan backed by the CDC for aerial spraying of insecticide to combat the virus. Residents were furious. The mayor of San Juan, Puerto Rico, called it "environmental terror," and the governor eventually blocked it.

Ralph Rivera Gutierrez, dean of the graduate school of public health at the University of Puerto Rico, is still irate about the proposed aerial spraying.

"To go and spray the entire country, based on the limited scientific evidence of the association [between Zika and microcephaly] — that is outrageous to us," Rivera Gutierrez says.

He's speaking with me at a community cleanup event in the Puerta de Tierra section of San Juan that is aimed at thwarting Zika. Volunteers and municipal workers are clearing out trash from a vacant lot to try to get rid of mosquito breeding grounds.

I ask Rivera Gutierrez if he sees Zika as a major problem for Puerto Rico. "Major?" he answers, and ponders the term. He looks skeptical. "I'll say it is a problem," he says.

Gutierrez says the government is Washington wants to "spray us." That phrase — "spray us" — is repeated a lot in Puerto Rico by opponents to the aerial spraying plan. Residents' response to Zika and their resistance to aerial spraying should be seen within a political context, he says, in which many Puerto Ricans distrust the U.S. government.

"We are an invaded country," Gutierrez says. "We've been a colony of the U.S. for 118 years, and there's been a lot of experimentation done on us. And so people have had enough of that."

The pesticide that was going to be sprayed — Naled — is an organophosphate that has been used in Puerto Rico in the past during dengue outbreaks. Also, Naled is currently being sprayed in Miami-Dade County, Fla., to try to address the spread of Zika there. Rivera Gutierrez points out correctly, however, that Naled is no longer approved for use in the European Union. And, he says, in the case of Zika, the proposal to spray the insecticide in Puerto Rico was an overreaction.

"We don't understand it, except for what might be some economic interest in getting rid of that product," Rivera Gutierrez says.

Amid the heat, the heavy summer rains and the skepticism in Puerto Rico, the Zika virus continues to spread — making people sick and possibly harming hundreds of babies who will be born in the months to come