Accessibility links
Psychiatrists Reminded To Refrain From Armchair Analysis Of Public Figures : Shots - Health News After a 1964 poll of psychiatrists found almost half considered Barry Goldwater psychologically unfit to be president, the doctors' professional society said they should stay mum on mental fitness. 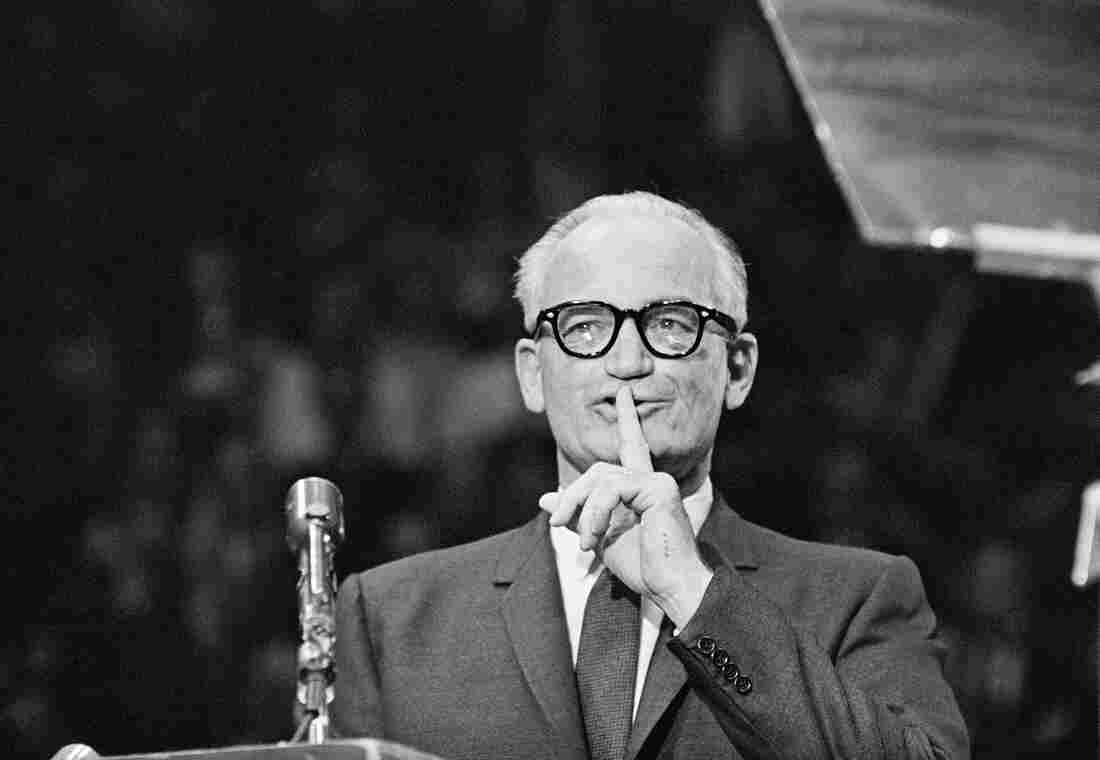 A poll of psychiatrists about the mental fitness of Barry Goldwater, Republican nominee for president in 1964, led to the creation of a rule that discourages doctors from public diagnoses. William Lovelace/Hulton Archive/Getty Images hide caption 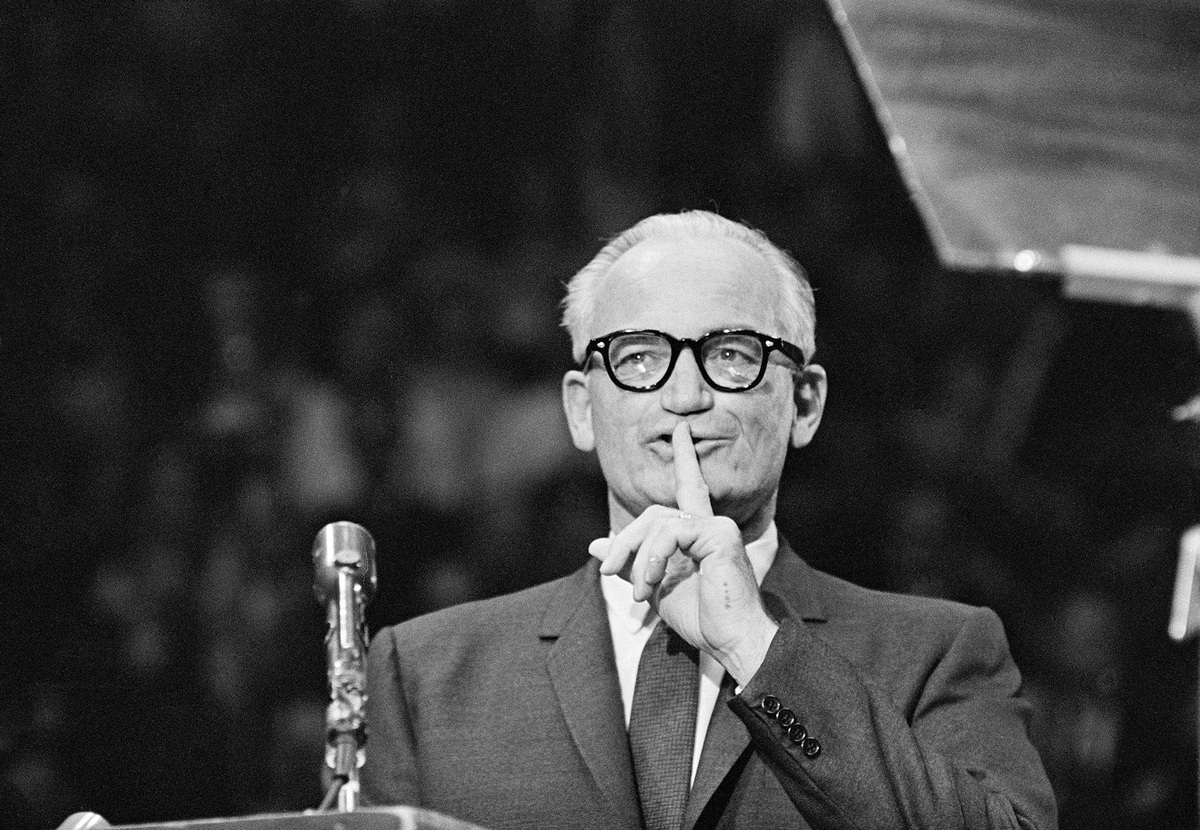 A poll of psychiatrists about the mental fitness of Barry Goldwater, Republican nominee for president in 1964, led to the creation of a rule that discourages doctors from public diagnoses.

On the organization's website, APA President Maria A. Oquendo wrote: "The unique atmosphere of this year's election cycle may lead some to want to psychoanalyze the candidates, but to do so would not only be unethical, it would be irresponsible."

Oquendo was referring to the "Goldwater Rule," a guideline adopted by the APA after a 1964 survey of psychiatrists found that nearly half of those polled felt that GOP presidential candidate Barry Goldwater was psychologically unfit to be president.

The rule states that despite the shiny diagnostic T-ball Trump has propped in front of them — his volatility, his grandiosity, his entitlement — professional code holds that if they haven't performed an in-person evaluation, psychiatrists should keep quiet on the mental character of public figures (unless of course they have that person's permission to speak out).

The professionalism is sound. But what happens when, in the minds of many, a candidate crosses the line?

On occasion psychiatrists are asked for an opinion about an individual who is in the light of public attention or who has disclosed information about himself/herself through public media. In such circumstances, a psychiatrist may share with the public his or her expertise about psychiatric issues in general. However, it is unethical for a psychiatrist to offer a professional opinion unless he or she has conducted an examination and has been granted proper authorization for such a statement.

Principles of Medical Ethics with Annotations Especially Applicable to Psychiatry

On Tuesday of this week, at rally in Wilmington, N.C., Trump suggested that perhaps there is something gun owners — or, "the Second Amendment people" — can do if Hillary Clinton is elected and appoints judges who oppose gun rights. Though he didn't specify just what they could do, the implication was ominous.

A few months ago, speaking about nuclear weapons, he reportedly asked a senior foreign policy adviser, "If we have them, why can't we use them?"

One could argue that a presidential candidate casually evoking the possibility of nuclear war — even if joking — could be seen as crossing a line.

Many mental health specialists feel that short of saddling politicians with formal diagnoses, we still need a realistic way to assess and discuss their mental states. In his recent cover story for The Atlantic, Dan McAdams, a psychology professor at Northwestern, did just that.

McAdams used scientifically backed personality and social psychology research to develop what he calls a "psychological commentary" on the life and the personality of Trump. It's a reasoned, rational account of a hulking persona: careful to avoid a specific diagnosis. McAdams simply concludes that the Republican candidate has "narcissistic motivations and a complementary personal narrative about winning at any cost."

"These constructs give you a richer understanding of his life and personality than you might get from, say, offering a clinical diagnosis," McAdams told me in an email.

Tufts psychiatrist Nassir Ghaemi agrees that mental assessments can be important, whether by psychiatrists, psychologists or other mental health professionals: "I think in principle [this] kind of detailed psychological analysis can be legitimate, and certainly shouldn't be verboten for being unethical." Yet, he says, objectivity and a scientific rationale are key, as opposed to what he considers catchphrases rooted in Freudian jargon. The media's frequent verdict on Trump's "narcissism" especially bugs him.

Ghaemi also proposes a few amendments to the Goldwater Rule. He believes that the in-person examination requirement should be nixed — assessing psychiatric patients often requires outside input: from colleagues; from family; from friends — and he also feels that psychiatrists should be able to weigh in when a candidate poses a societal threat that overtakes professional oath.

Still, Ghaemi, McAdams and the other mental health experts I interviewed in reporting this piece all staunchly advise against diagnosing public figures from afar — armchair psychiatry, they feel, is a great irresponsibility.

But many also feel that even in the absence of a diagnosis, the more general psychological interpretations common to cable news and other media outlets — not under the rubric of the Goldwater Rule, psychologists show up with exceptional frequency as talking heads — can be ethically dubious. 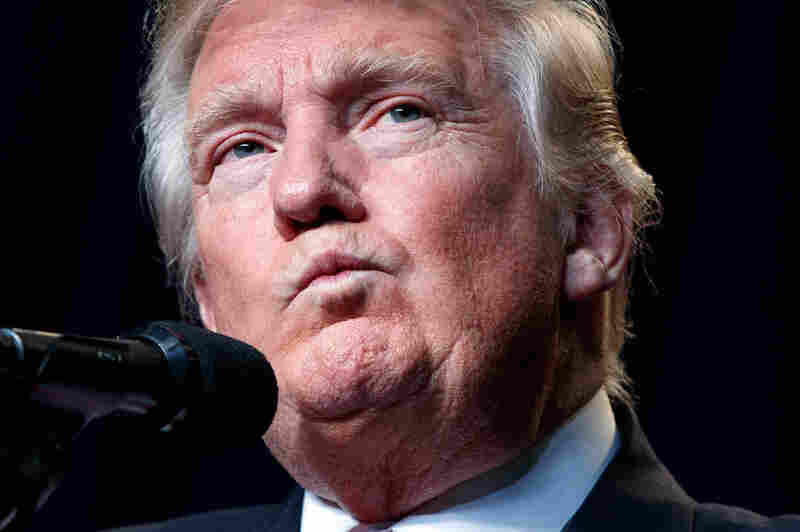 After a series of statements by Donald Trump drew fire, the president of the American Psychiatric Association cautioned members that publicly psychoanalyzing candidates is unethical and irresponsible. Evan Vucci/AP hide caption 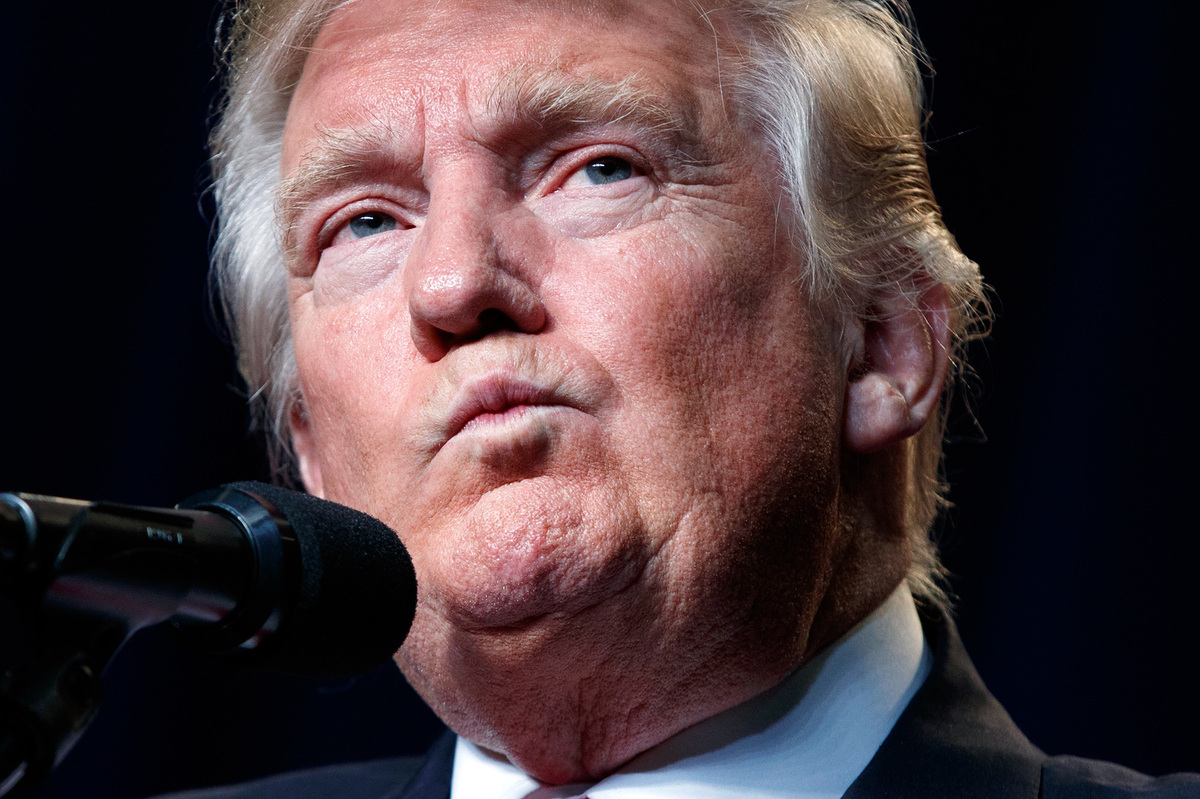 After a series of statements by Donald Trump drew fire, the president of the American Psychiatric Association cautioned members that publicly psychoanalyzing candidates is unethical and irresponsible.

"I think offering semi-psychological interpretations is a poor idea for psychologists and psychiatrists," said Arthur Caplan, a bioethicist at New York University's Langone Medical Center. "How can anyone give an in-depth character analysis on psychological or mental health grounds without knowing or examining the person at all?"

Caplan feels doing so not only stirs up gossip — gossip that demeans those suffering from diagnosed mental illness — but risks pathologizing what could be normal, if off-putting, personality traits. "Positions or attitudes that are outside of the mainstream or outside the pale can be ascribed to mental illness, when in fact there are plenty of racist, sexist, classist bigots all over the place who are not mentally ill," he said.

Insight into the health of our politicians has been a campaign concern, well, probably forever.

But a few recent examples come to mind. FDR had a deal with the press corps to cover up the extent of his paralysis. John F. Kennedy's Addison's disease, a disorder of the adrenal glands, was cleverly concealed until after he was elected. President Eisenhower, after being hospitalized for a heart attack, was red-faced when his doctors publicly applauded his first "good bowel movement."

In her statement on behalf of the APA, Oquendo makes clear her strong support for the Goldwater Rule. She — and Caplan for that matter — also feel the guidance should apply not just to psychiatrists but to psychologists and other mental health practitioners as well.

One reason that Oquendo is resolute in pointing this out is that plenty of people with mental illness attain great success: CEOs, performers and even psychiatrists.

"Whether we like it or not, many have the notion that an individual with a psychiatric condition is less capable than others," she laments. "The fact is that's simply not true."

Ghaemi has written extensively on how mental illness can positively contribute to character and success in many ways, whether it's the empathy and realism sometimes imparted by depression (Lincoln, Gandhi and Martin Luther King Jr. come to mind) or the ambition and creativity brought on by mania. A 2006 study out of Duke University reviewed the historical records of 37 presidents and concluded that 18 of them met criteria of psychiatric diagnoses.

One idea occasionally floated through the psychiatry community is instituting a mandatory mental and physical health screen for aspiring presidents, the results of which would be made public.

In 2008, for example, a panel of high-level health experts recommended that both presidential and vice presidential candidates be required to undergo a health screen by an independent team of doctors. To this end, Ghaemi argues that if someone is in a position to send our sons and daughters into war, we deserve a more in-depth glimpse into his or her psyche — one interpreted and presented to the public by mental health experts.

"I've been arguing for a presidential health screen for over 20 years!" said Caplan, laughing. "But I see it as a panel that simply provides information for the public to assess, not one that qualifies or disqualifies anyone. If you want to vote for FDR with polio or Reagan with incipient Alzheimer's, you should be able to."

However, much like the 2008 recommendation, Caplan's efforts, he admits, have gone nowhere.

Oquendo is not sold on a standardized mental health screen, pointing out that upwards of 20 percent of the population experiences mental illness in a given year — and also that a public screen could bolster the erroneous notion that having a psychiatric condition renders someone an unfit candidate.

So assuming no screening process is implemented anytime soon — and also that asserting psychiatric absolutes remotely is probably irresponsible and ultimately unhelpful — how are we to assess the mental character and capacities of our candidates?

According to Oquendo, the answer is simple: behavior.

"So many factors can influence behavior. And, for example, not everyone with bipolar will be overly creative or ambitious, so you can't predict somebody's behavior just based on diagnosis," she explains. "But how someone acts is right there for people to see; voters can then decide if a particular behavior is acceptable or not."

In other words, the cause of someone's conduct — whether mental illness or not — is beside the point.

Bret Stetka is a writer based in New York and an editorial director at Medscape. His work has appeared in Wired, Scientific American and on The Atlantic.com. He graduated from University of Virginia School of Medicine in 2005. He's also on Twitter:@BretStetka