Accessibility links
California Court Helps Kids By Healing Parents' Addictions : Shots - Health News A special court in Sacramento, Calif., aims to keep families together by getting treatment for parents who have substance abuse problems, instead of sending off their kids to foster care. 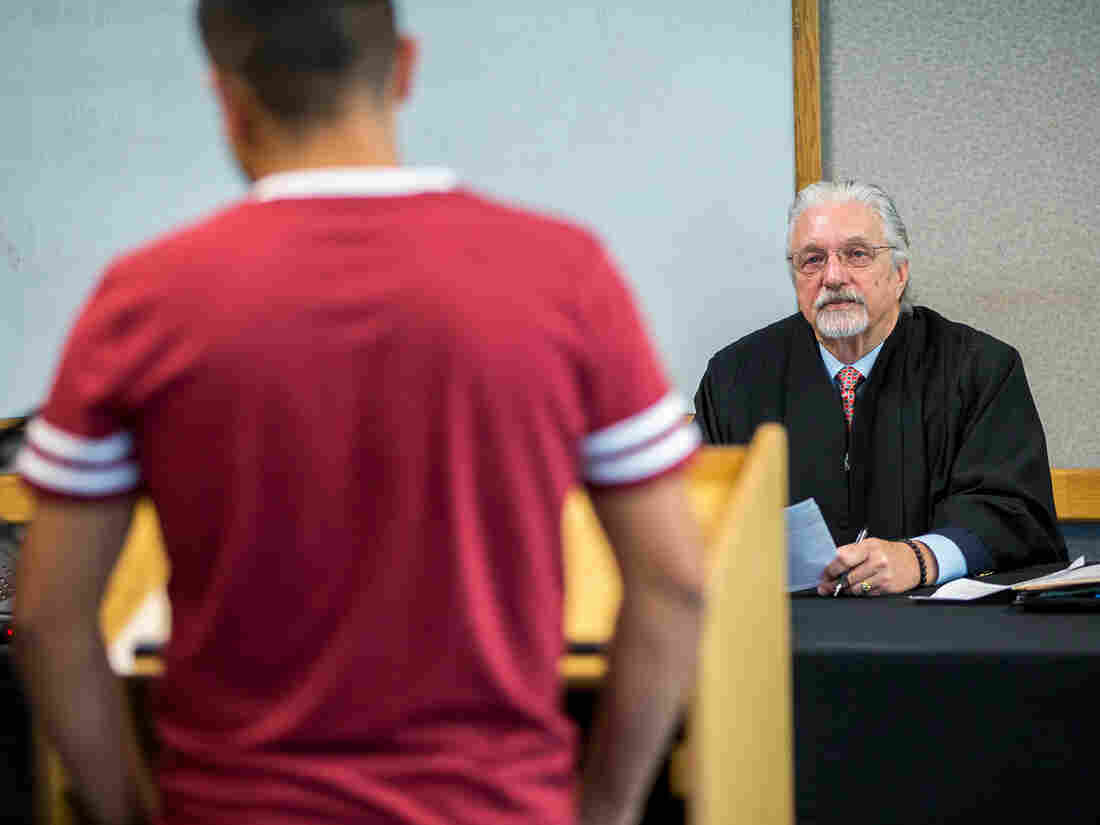 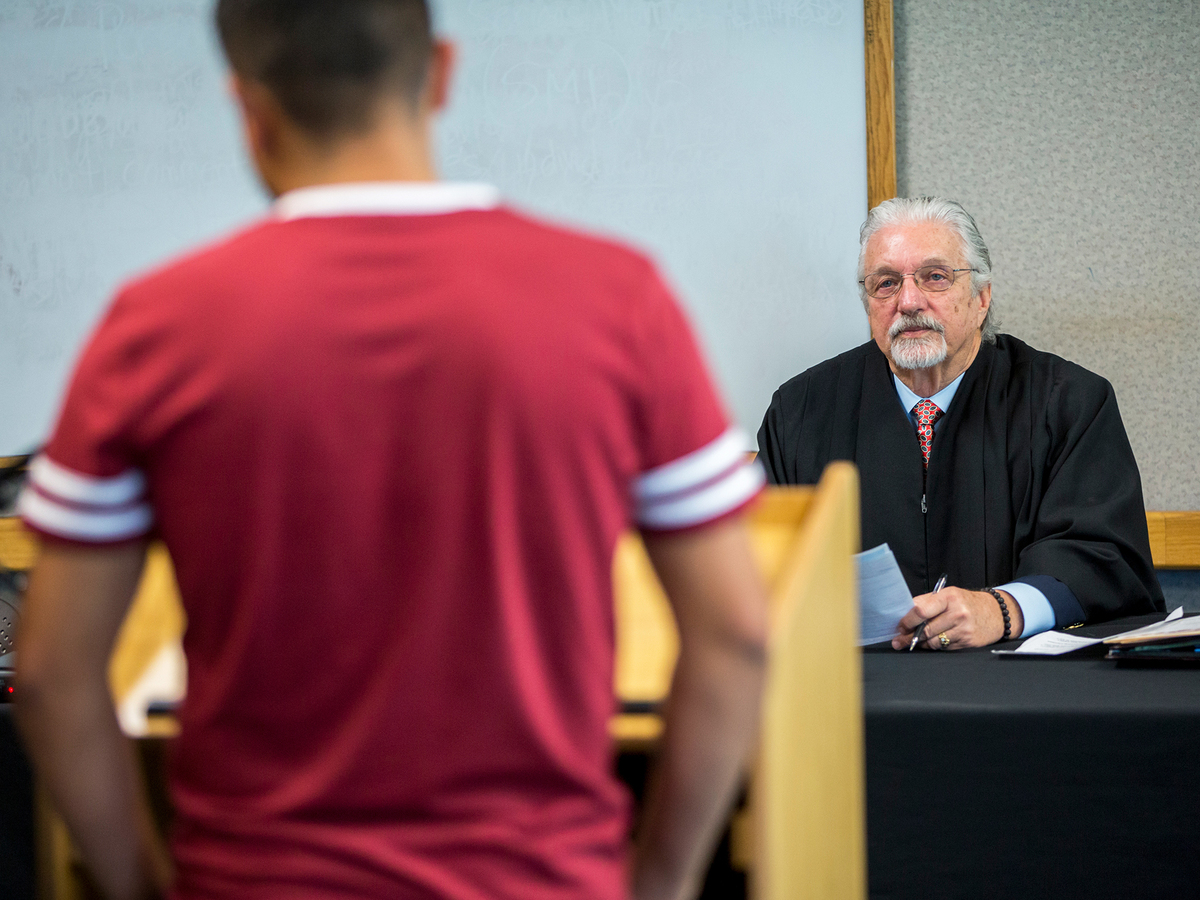 At 10 a.m. on a recent Wednesday morning, a line of parents pushing strollers filed into a conference room at the Sacramento County Courthouse in California. They sat at rows of narrow plastic tables, shushing their babies and looking up at a man in a black robe.

Hearing Officer Jim Teal sounded his gavel. "This is the time and place set for Early Intervention Family Drug Court," he began, gazing sternly at the parents who sat before him. "Graduation from this court is considered a critical factor in determination that the children of participants will be safe from any further exposure to the danger and destructive impact of parental substance abuse."

There has been a surge recently, across the U.S., in the number of children entering the foster care system after years of decline. Nationally, roughly 265,000 kids entered foster care in 2015 — the highest number since 2008, according to a recent government report.

Substance abuse is a factor in up to 80 percent of cases where a child is removed from a home. And there are signs that the opioid epidemic may be to blame.

Parents who receive addiction treatment are much more likely to get their kids back, but 4 in 5 parents fail to complete their treatment regimen.

The Early Intervention Family Drug Court aims to change that by helping parents with substance abuse problems to complete treatment before their children enter the foster care system. If the parents fail, they'll be sent to a formal family drug court, where their children are taken away and given attorneys of their own.

But before that, the parents get this opportunity to enter recovery, through a mix of support, medication-assisted treatment and tough love.

Many parents participating in the early intervention drug court entered the system after having babies born dependent on opioids or other drugs. Others were reported to Child Protective Services by friends or family. All are at risk of losing custody of their children because of their drug abuse.

Emma, 20, a striking woman with long blond hair, approached Teal's podium holding a baby. NPR is withholding her last name because her case is active with Child Protective Services.

"Good morning," Teal said. "Who do you have with you there?"

"My daughter, Cailynn," Emma answered proudly, bouncing the cooing child on her hip.

Emma started using drugs when she was 16. At first it was methamphetamines, she said, but she quickly transitioned to heroin. Then she got pregnant.

Her daughter Cailynn tested positive for opioids at birth. Child Protective Services came to the hospital and took the baby into custody.

"I regret every moment of it," Emma said. "It's hard. But I've got to keep my head up and keep going." From the start, she wanted her daughter back. 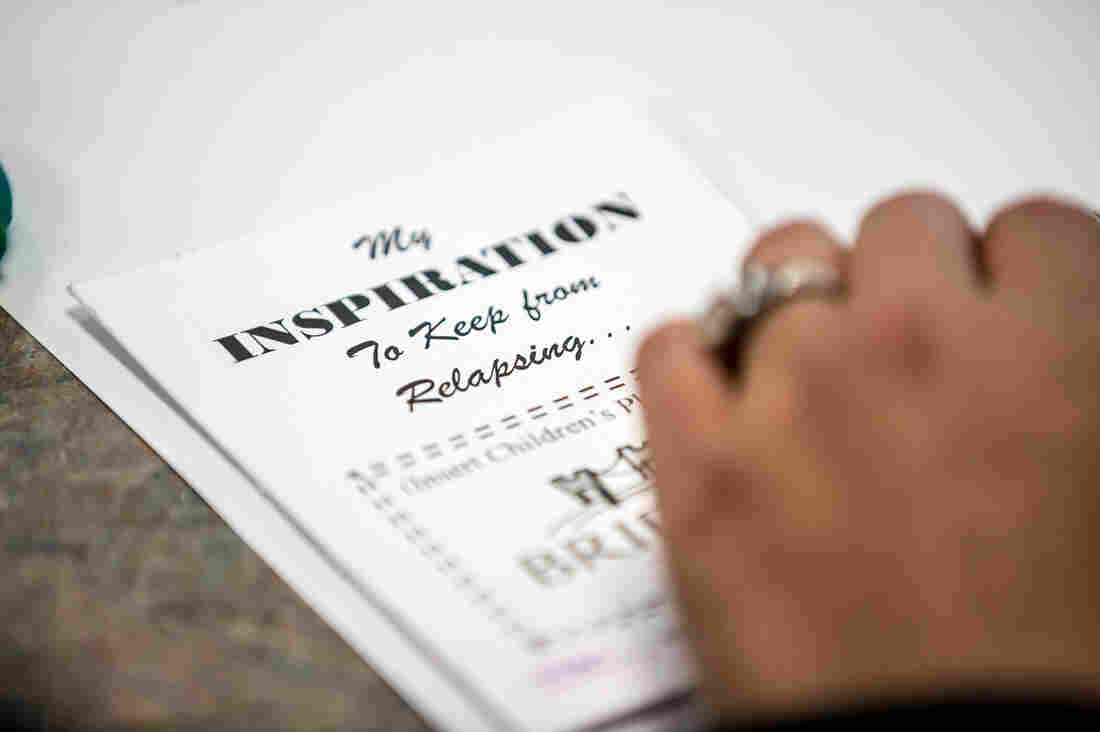 A court booklet give parents inspiration to stay off drugs. They paste a photo of their child on the front and then write about their experiences inside. Robert Durell for Kaiser Health News hide caption

Usually, Sacramento County has a three-month wait for people who need substance abuse treatment. But by volunteering to participate in the drug court, Emma was able to get treatment right away and her baby back.

"So Emma, it says here you're 63 days compliant," Teal said that day in court. "And 63 days in the program, so you've been good. You've been doing what you're told. Congratulations."

The other parents in the room burst into applause — this is a major accomplishment. The six-month program is rigorous. In addition to monthly sessions at the court, the parents must attend almost daily group meetings, submit to random drug tests and take parenting classes. Many, like Emma, go to inpatient rehab. Medication-assisted therapy for opioids is also available. And once or twice a week, they get a home visit from their social worker.

Emma attributed much of her success in the program so far to social worker Matthew Takamoto, whom she called "amazing."

Takamoto has been a social worker for 20 years and has been part of the EIFDC since the program began six years ago. The program, he said, is an important change in way the county handles addiction.

"In the olden days, we were quicker to send them to court," he said. Their approach was "more 'blaming the addict,' versus giving them the tools they need."

In the afternoon following the court meeting, Takamoto drove to the inpatient residential facility where Emma lives with her daughter. In the back is a grassy yard with a small jungle gym, where several mothers sat, watching their children play. Emma was there, too, holding Cailynn in her lap. 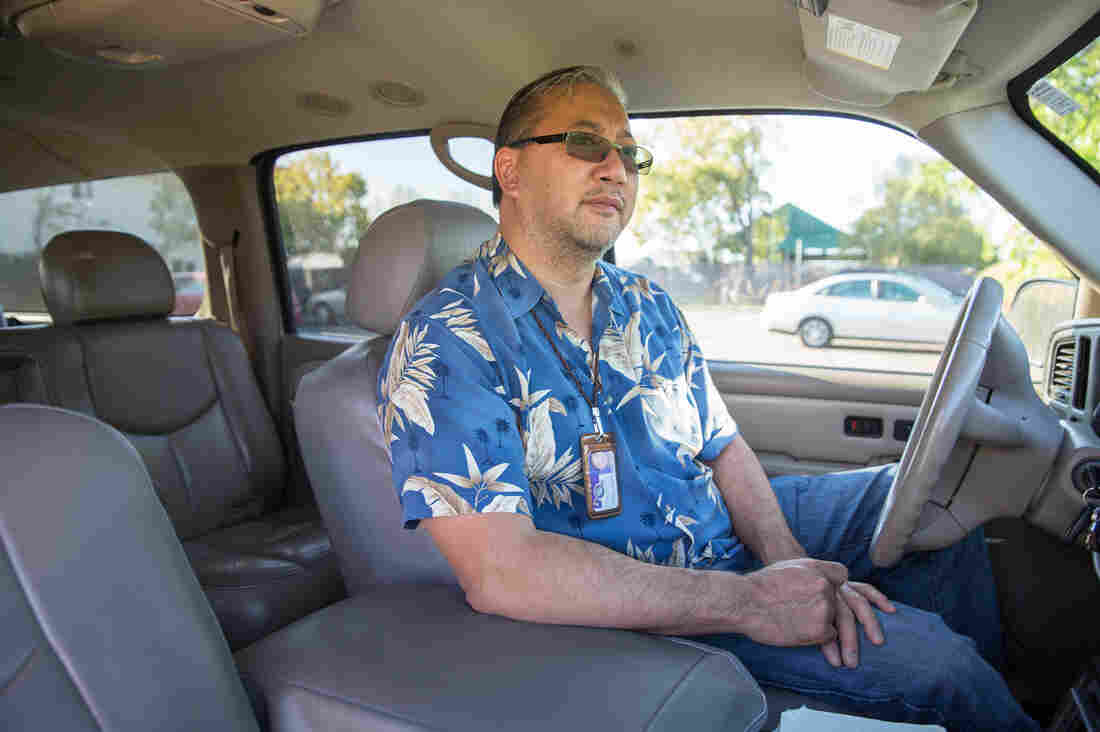 Matthew Takamoto has been been a social worker with the early intervention program in Sacramento County from its start, and is pleased with its success. The hardest part, he says, is realizing that not every parent will be be able to quit drugs for good. Robert Durell for Kaiser Health News hide caption 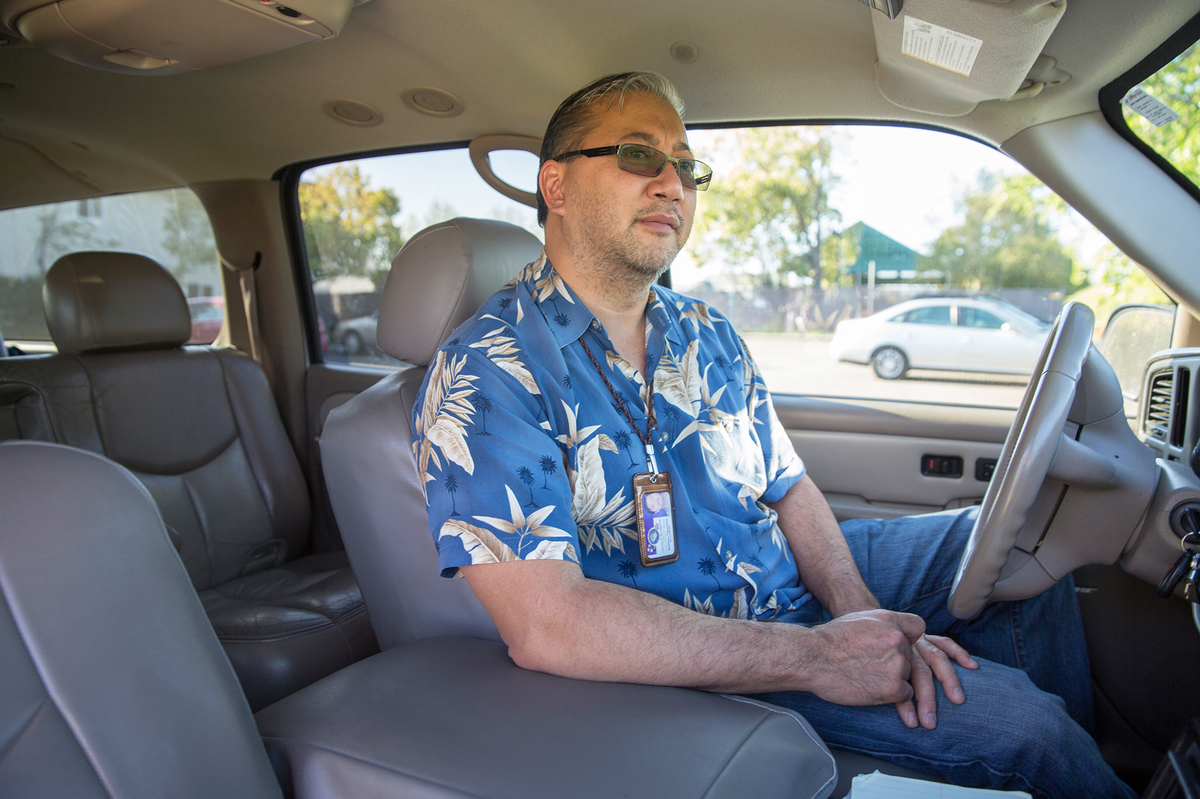 Matthew Takamoto has been been a social worker with the early intervention program in Sacramento County from its start, and is pleased with its success. The hardest part, he says, is realizing that not every parent will be be able to quit drugs for good.

Takamoto seemed happy with Emma's progress. "You take these clients from the very beginning, where they're broken and it's the worst day of their life," he said. "And to see them slowly get back up as they have days of clean time — it's been incredible."

The hardest part of his job, he said, is realizing that not all the parents are going to make it. In fact, just a third end up graduating from the county's program.

"If these parents aren't successful, it's the kids [who] pay the price," Takamoto said. "The parents are doing what they want to do, but the kids don't have a choice."

Just 5 to 10 percent of families in the United States who could use family drug courts have access to them, according to Children and Family Futures, an organization that advises and evaluates family drug courts. Sacramento's program is one of about 350 in the country; most of the rest work with families after their children have entered the foster system.

"People can overcome addiction if the motivation is strong enough, and this is the most effective motivation I have ever seen," Heller said.

Just 10 percent of kids with families in the program end up being removed from their home, compared to 30 percent of children in families who do not participate. That represents a major savings to the county — about $21,000 dollars a year for every kid who doesn't have go into the court and foster system, for an annual total savings of $7 million.

"The rush that comes with getting high is pretty spectacular," Heller said. "And it's very hard physically, once the addiction happens, to overcome. But if there is one thing that matters to people more than the thrill of getting high, it's the thrill of doing the right thing for your children and keeping your family intact."

Kaiser Health News is a national health policy news service. It is an editorially independent program of the Henry J. Kaiser Family Foundation. You can follow Jenny Gold on Twitter: @JennyAGold.