Accessibility links
An Arizona Town Moves To Regulate Sober Living Homes : Shots - Health News Prescott, Ariz., has become a destination of choice for people trying to get sober, with growing numbers of group homes for recovering addicts. Some residents are calling for regulation of the homes. 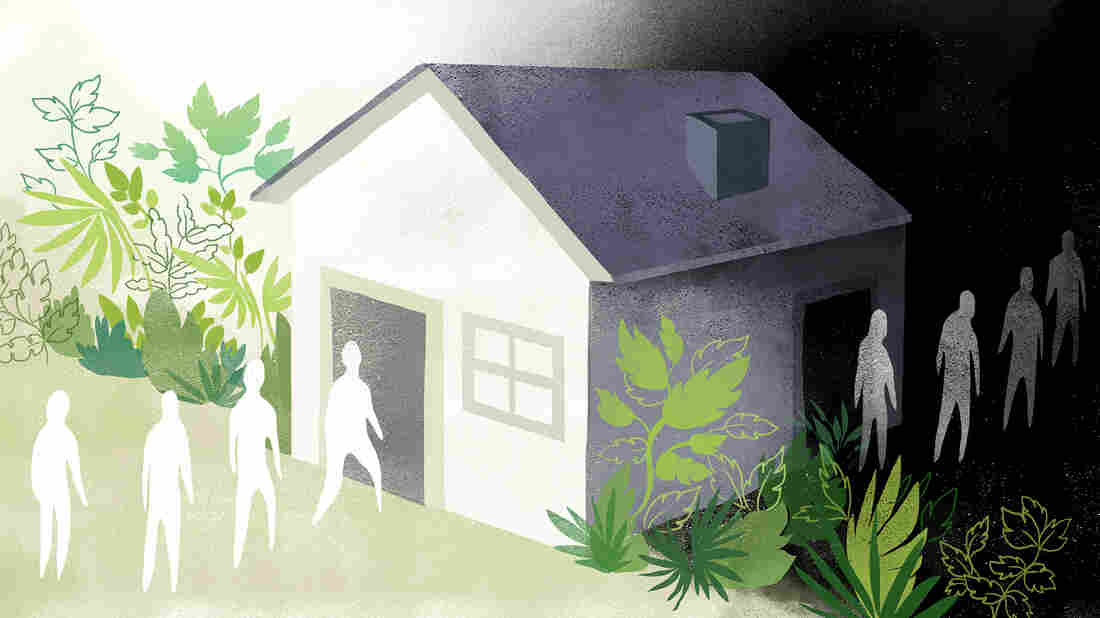 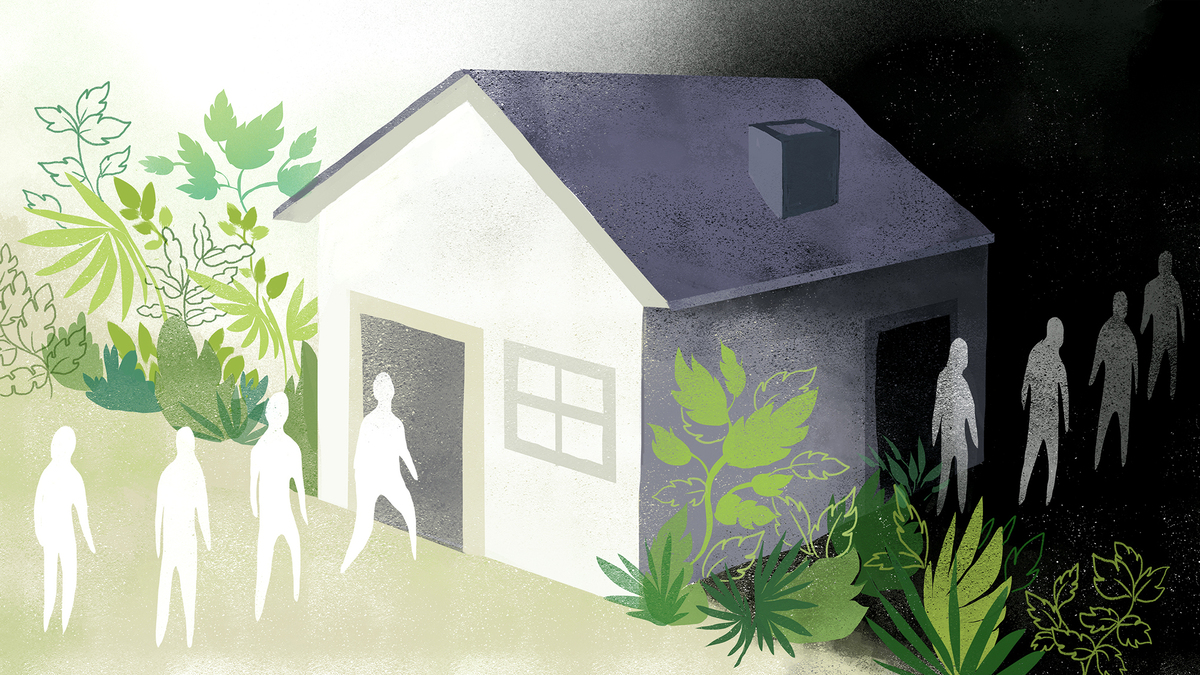 When Phillip decided to stop using heroin, he knew sticking around home was a recipe for failure.

"It's just, like, a heroin epidemic on Long Island where I'm from. So I had to get away from that and now I'm in Prescott, Ariz.," Phillip says. NPR agreed not to use his last name because he is struggling with addiction and fears it might hurt his chances of future employment.

Phillip and a handful of other young people are filtering through the line at a soup kitchen at the Prescott United Methodist Church just before noon. They are grabbing a bite to eat before their next meeting of recovering addicts nearby.

"Everybody here is basically, I feel like, in recovery and they're more serious about it," says Phillip.

Not like back home in New York, he says, where people shoot up in the parking lot before meetings.

You hear similar stories from others who come to this idyllic mountain community to shake their addiction. Outdoor recreation, a mild climate, scenic vistas and a welcoming attitude toward those in recovery is touted in a promotional video by a group called Drug Rehab Arizona.

And with its motto "Welcome to Everybody's Hometown," Prescott has become a hub for the multi-billion-dollar recovery industry. It's even listed by the recovery website TheFix as one of the top 10 destinations in the country to get sober.

This has caused a boom in sober living houses — homes where six to eight recovering addicts live under the supervision of a house manager, who is usually also a recovering addict. During the day, they typically go to outpatient treatment centers, attend meetings and once further into recovery, look for work. At last count, Prescott, population 40,000, had more than 150 of these sober living homes, with new ones opening up frequently. And some Prescott residents are upset.

Group homes have inundated the community, says Connie Cantelme, who lives in one of Prescott's historic neighborhoods where several sober houses have popped up.

"When you've got a hundred boys and men trying to kick a heroin problem, how do you feel safe living next door to them when they're falling off the wagon all the time?" she asks.

Once she remembers coming outside for her morning coffee to find that a man had overdosed under her deck.

Cantelme worries this influx of recovering addicts and the proliferation of group homes is tarnishing Prescott's image.

That's certainly a concern, says Allison Zelms, Prescott's deputy city manager, who says, "We are reaching a tipping point." But Zelms says an even greater concern is the quality of care in some of these programs.

"Are people really being sold a bill of goods, or are they going to come to Prescott to really have a good chance of success in their treatment?" Zelms asks.

That's a difficult question to answer. Group homes are generally easy to start, cheap to run and, in states like Arizona, largely unregulated, other than some city zoning and code enforcement. 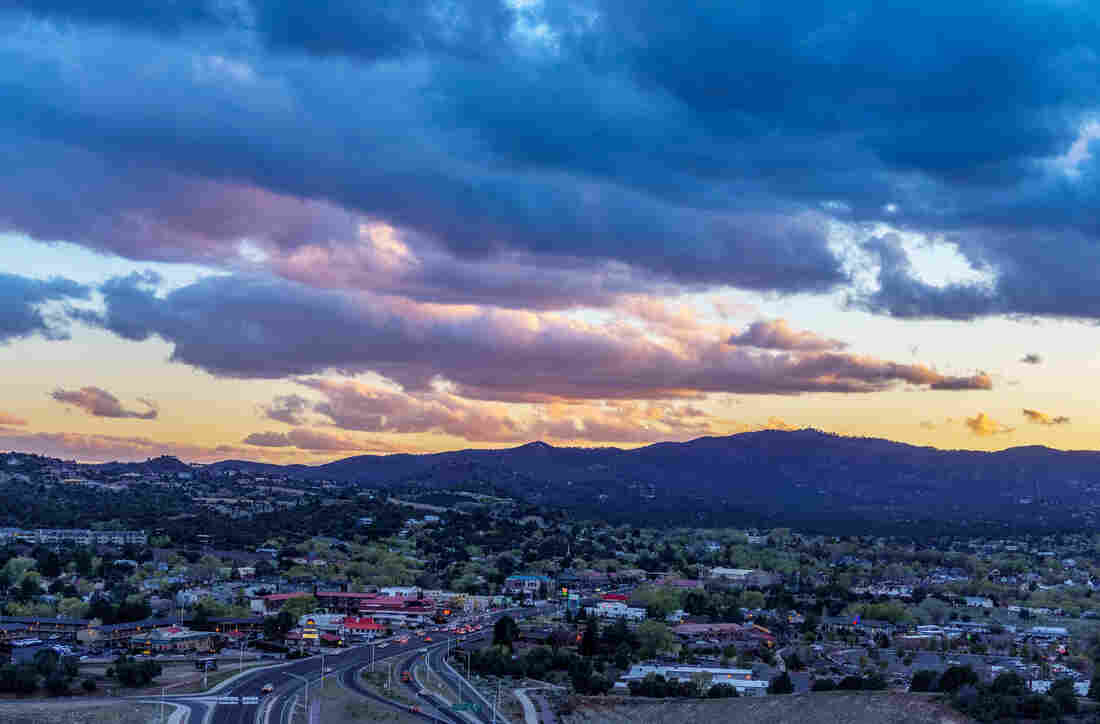 As treatment programs have proliferated there, Prescott, Ariz., has become a destination for people trying to overcome addiction. Jeff Turner/Flickr hide caption 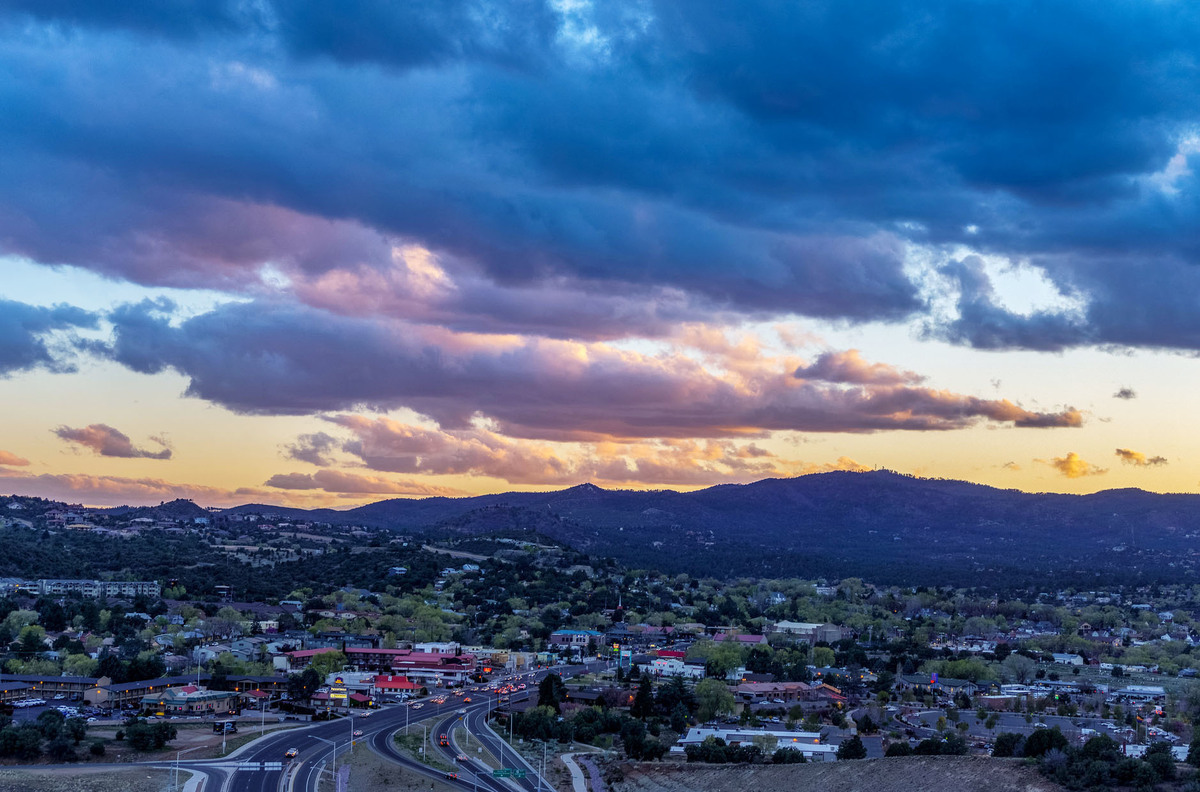 As treatment programs have proliferated there, Prescott, Ariz., has become a destination for people trying to overcome addiction.

In Prescott, the homes tend to be affiliated with outpatient medical treatment centers that are licensed by the state. This arrangement, known as the Florida Model, separates the residential setting from the medical components of treatment. Families looking for a safe place to send an addicted son or daughter are offered a package deal: They pay out of pocket for the living expenses and insurance generally covers the cost of treatment.

This was the case for Vincent Rienzie Jr. He flew across the country to attend the Promise Recovery Center in Prescott and stayed in an affiliated group home. But after 60 days sober, Rienzie says he was kicked out of the group home for violating a rule against socializing with women. He ended up on the street.

"Our insurance wasn't paying them and they were looking to make an excuse to throw us out," Rienzie said, moments before his plane took off, bound for his home on Long Island, N.Y.

Promise Recovery did not respond to requests for comment. But Barry Hancock, who was working as a therapist in the program at the time and was later fired, says he was told by people running the program they might need to find ways to kick out clients whose insurance wasn't paying.

"Insurance [payments] come into these programs and people make a lot of money," says Hancock.

While it is difficult to nail down numbers, sources inside the insurance industry say out-of-network providers can typically bill from $500 to $800 a day for outpatient treatment.

"The drive to make money sometimes gets to be a greater motivator than the drive for patient safety and clinical care," says Gerald Shulman, a clinical psychologist in Jacksonville, Fla., who studies cost and quality in addiction treatment.

A review of complaints made to the state about treatment programs in Prescott, obtained by NPR member station KJZZ through public records requests, speak to these systemic issues: Recovering addicts enter programs, often without discharge plans. Many will bounce around to three, six or more programs. Sometimes clients are kicked out, allegedly because insurance runs out. Extensive interviews with individuals echo those themes.

Kelly Dwyer has watched the proliferation of sober living homes in recent years. She came to Prescott in 2007 to give up drinking and get sober.

"My main goal was just to wake up every morning and not want to die," Dwyer remembers as she sits on a park bench in the historic town square.

Dwyer entered treatment and was placed in a sober living house.

"It was just kind of like a regular house in a regular neighborhood," says Dwyer. "We would walk to the facility every morning and do some morning groups. Then we would go to a meeting at noon."

But Dwyer's time in the group home didn't go smoothly. Her roommate kept asking her to buy alcohol, she says. And after an argument with a staff member, she was kicked out of the program.

"At that point, I told them I don't have any money. I don't know anybody in Prescott," she says.

Dwyer is sober now and works as a real estate agent in town. She wants to see more regulation and stricter guidelines for the homes. "It's not quantity. It's quality" that's important, Dwyer says.

Take the case of Joey Martin. Like so many parents, Jill and Glenn Martin never imagined their teenage son might become a drug addict.

"He played baseball a lot, and he was into school and girls and just everything a regular teenager would be," recalls Glenn Martin, as he sits with his wife, Jill Martin, at their home in Prescott. 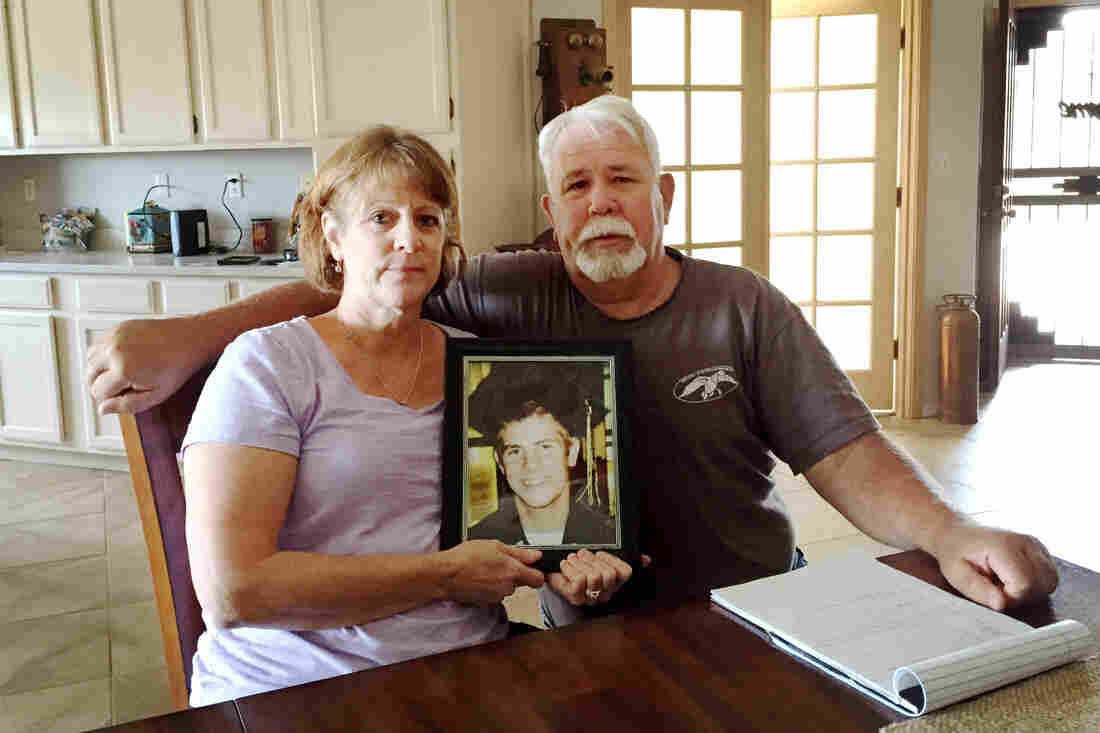 Jill and Glenn Martin's son Joey died of an opioid overdose while living in a group home. He was 22. Will Stone/KJZZ hide caption

But about a year before graduating from high school, Joey was in a head-on collision with a drunken driver. Soon he was using prescription pills and, eventually, abusing them.

"When your kid is addicted, you do whatever you can to help him, and that's what we did," says Glenn Martin.

For three years, they sent Joey to various programs. Eventually he ended up at a sober living home in Southern California. The Martins were hopeful. Joey did well and was talking about going to college. Then one evening they got a call: Joey, 22, was found dead in his room. He had overdosed.

Since their son's death, Glenn and Jill Martin have advocated for more regulation of sober living homes — first in Southern California where Joey died and again when they moved to Prescott.

Just this spring, Arizona took a significant step toward allowing more government oversight of these homes. The Arizona Legislature passed a law that allows a city, town or county to regulate health and safety standards for sober living homes — including supervision requirements and exit plans.

"If they're giving good treatment they should be open to what we are proposing," says Noel Campbell, the Arizona lawmaker who pushed through the legislation.

But some people who run group homes are pushing back.

"There's a tremendous amount of fear associated with the alcoholic and the drug addict," says Mark Temple, who operates Solutions House, which has more than a dozen homes in Prescott.

"Our focus is to help these kids. Our focus has never been on making money," he says. "We are a program based on spiritual principles. We are not a business built on profit and loss."

"The challenges of living in a neighborhood, the challenges of working in a community, as much as you can replicate the real world, I think you stand a better chance of them making it," she says.

Jill and Glenn Martin are adamant that more regulation is needed in Arizona and across the country.