Accessibility links
Beyond Slurpees: Many Japanese Mini-Marts Now Cater To Elders : Shots - Health News Convenience is in the eye of the generation. Increasingly, corner markets in Japan target the 27 percent of residents over 65 — offering nursing care advice and home delivery of meals and groceries. 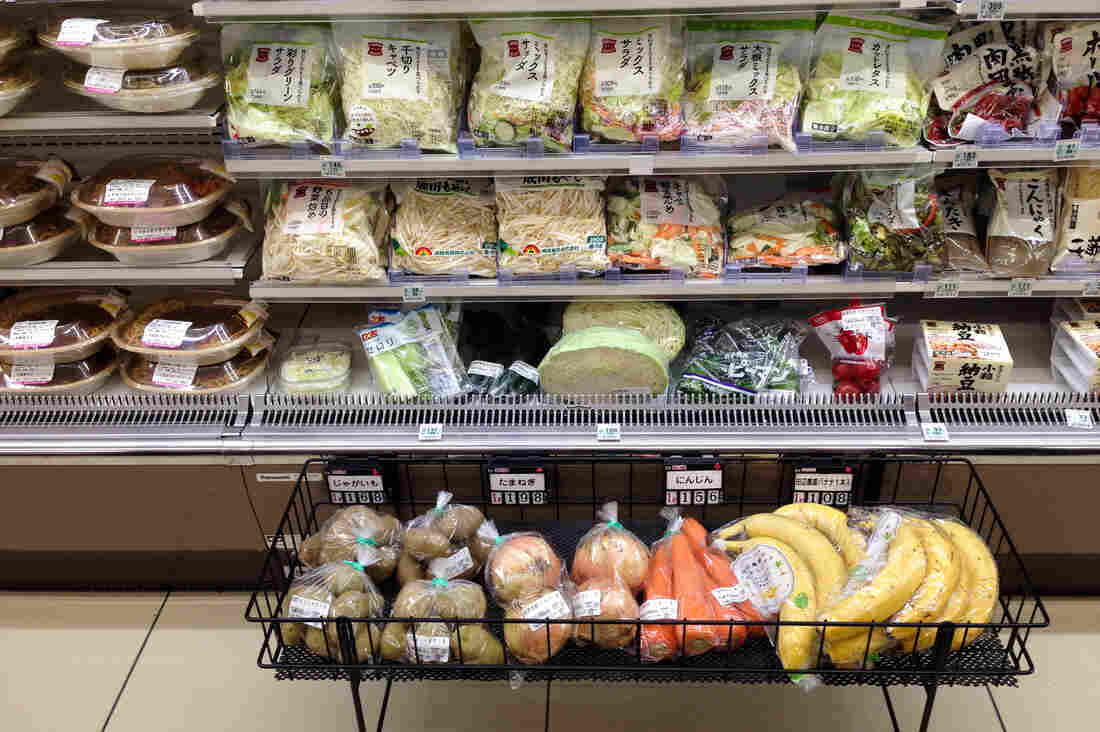 This Lawson convenience store in Kowaguchi, Japan, sells a selection of prepared meals and fresh vegetables and meats, along with products aimed at the elderly. Many of the store's older customers find it hard to get to the supermarket, the store's manager says. Ina Jaffe/NPR hide caption 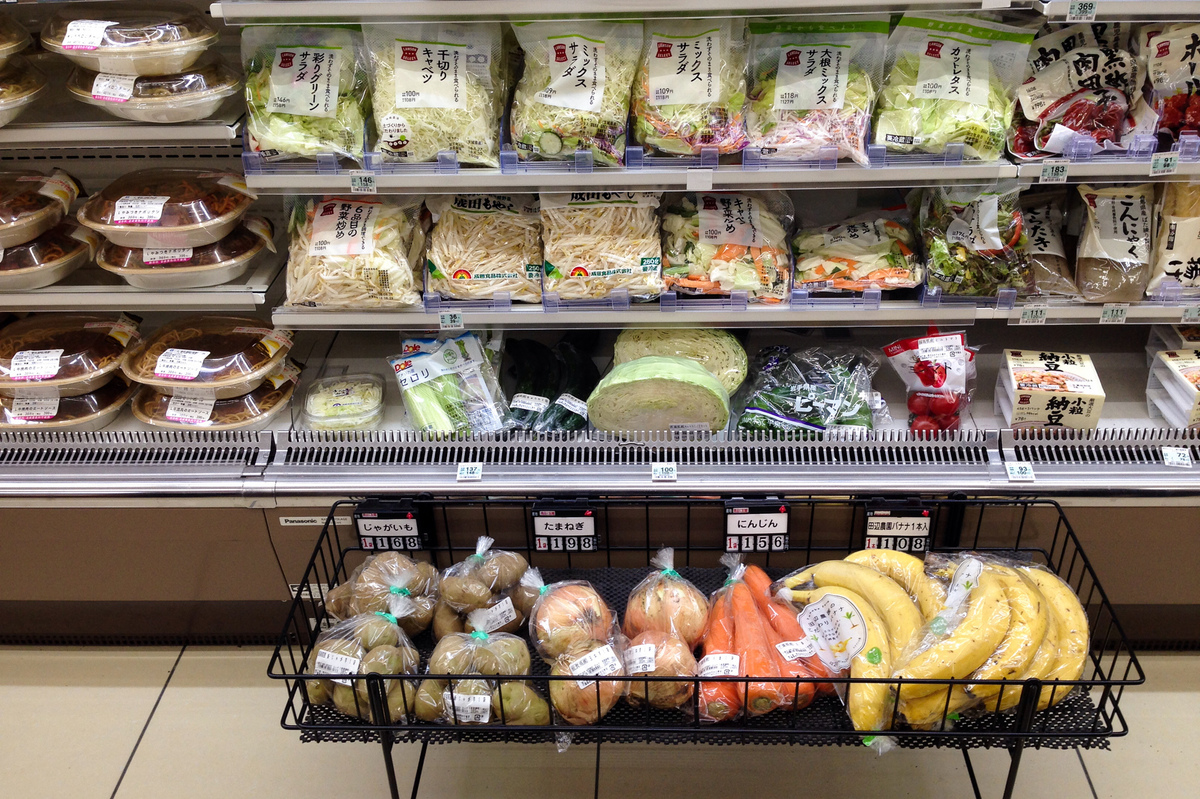 This Lawson convenience store in Kowaguchi, Japan, sells a selection of prepared meals and fresh vegetables and meats, along with products aimed at the elderly. Many of the store's older customers find it hard to get to the supermarket, the store's manager says.

In Japanese cities, space is at a premium. So convenience stores that cram everything from Kleenex to rice balls into a few square yards are everywhere. You can't walk five minutes in most cities without running into one or two or even half a dozen.

But they're not just a place for Slurpees and snacks. Nearly 27 percent of Japan's population is now 65 or older, and convenience stores are changing to serve this growing market.

Case in point is a Lawson convenience store in the city of Kawaguchi, north of Tokyo. It sells products that an American consumer would never find tucked between the aspirin and the candy bars. For example, there's a whole rack of ready-to-heat meals in colorful pouches. They're rated at levels from 1 to 5, based on how hard it is to chew what's inside.

Or, as the store's manager, Masahiko Terada, puts it, "the higher the level, the less need for you to chew. In the end it's porridge." 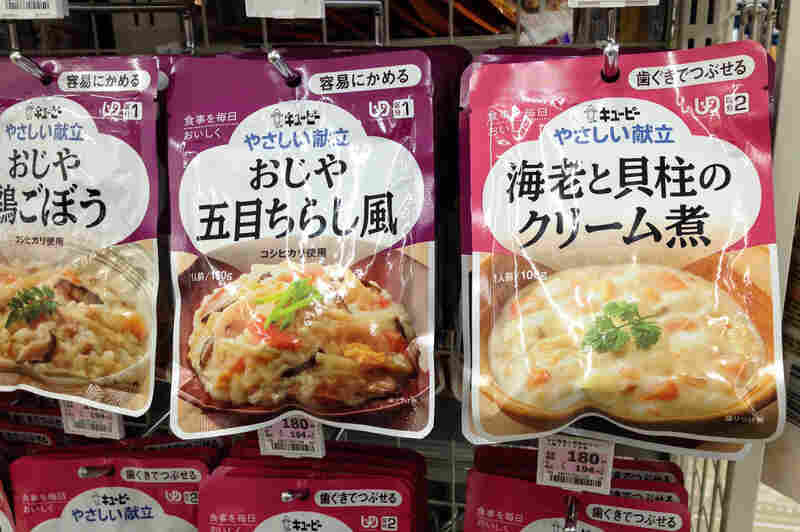 The Kawaguchi mini-mart also sells some ready-to-eat meals in pouches that are ranked from 1 to 5 — based on how difficult it is to chew what's inside. Ina Jaffe/NPR hide caption 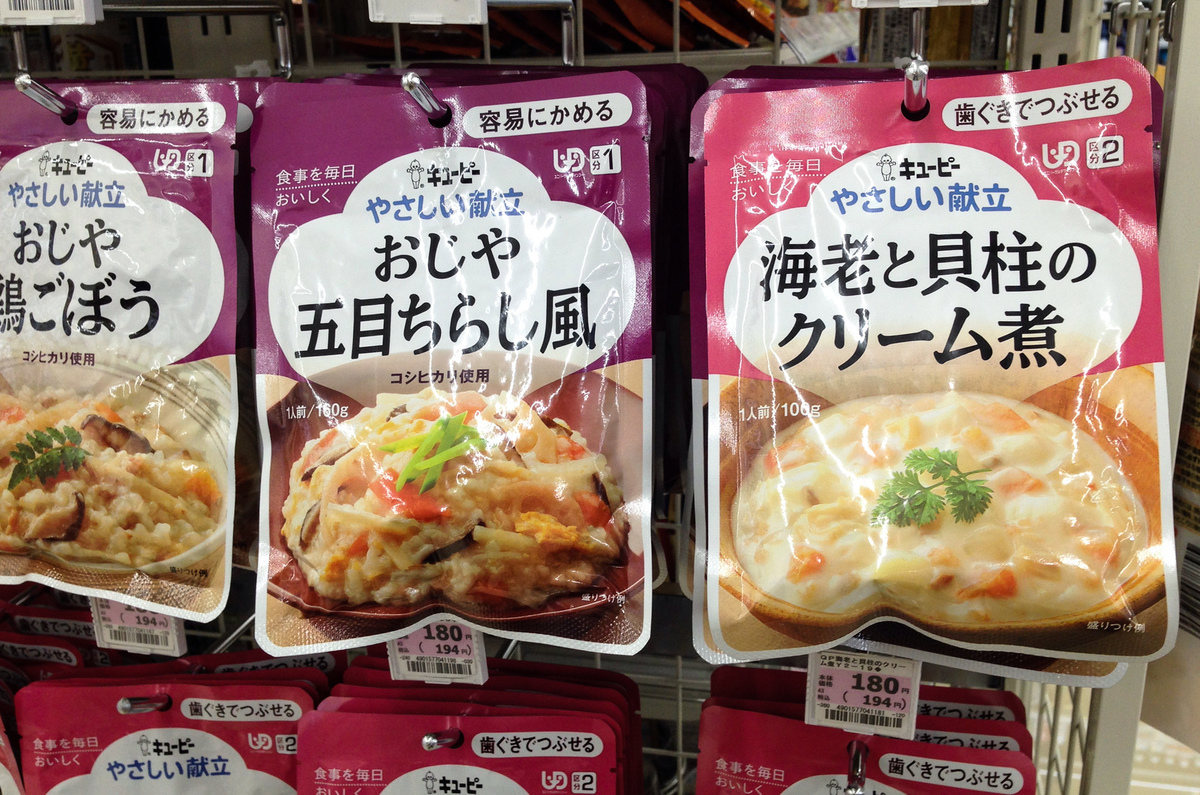 The Kawaguchi mini-mart also sells some ready-to-eat meals in pouches that are ranked from 1 to 5 — based on how difficult it is to chew what's inside.

Of course, not all older people have trouble chewing, and many still cook for themselves. So Terada points out a fresh food section unlike anything you'd see in most U.S. mini-marts. There are packages of raw vegetables and meat, much of it already cut up and packaged in single-serving amounts for the increasing number of older people living alone these days in Japan.

There are also dozens of products intended not so much for older consumers as for their caregivers — items to deal with incontinence and its consequences, for example, like especially strong, deodorizing laundry detergent or devices that are useful for giving bed baths.

"So, basically, we have this lineup of products so that the elderly don't need to go to the big supermarkets," says Terada. "They can use this store as a substitute."

Because older adults make up nearly 27 percent of Japan's population, they are a market that can't be ignored, says Ming Li, who works in communications for Lawson.

"We try to accommodate the changes in society," he says.

The convenience store industry in Japan is dominated by three major chains. Lawson is second largest. The leader is 7-Eleven, which is now owned by a Japanese company. Li says the industry is highly competitive.

In fact, other chains are also experimenting with services that might appeal to older consumers, such as home delivery of meals or being located alongside pharmacies.

This Lawson store in Kawaguchi is one of six in a special line called Care Lawson. The company plans to expand to 30 by early next year. And these Care Lawson stores have another special feature: staff like Mika Kojima.

She's a nursing care manager and she's stationed at this Lawson store. In fact the franchise owner of this store is actually a nursing services company. Anyone who comes in can ask for Kojima's help. For example, she'll go to an older client's home to make sure it's set up so they can live there safely. And she'll connect families with adult day care services.

Whatever the request, she says, "I make sure that I'm always prepared to listen with a smile on my face."

Kojima's tiny office is next to a cafe area meant to give older people a place to hang out and drink tea or watch television. This is where she sees most of her clients.

"People in the neighborhood come in for tea and they start talking to me," Kojima says. "And they come in four or five times a week."

So, most of the time, Kojima deals in tea and sympathy — one of the oldest therapies in the world. And it's coming soon to a growing number of convenience stores in Japan.