Accessibility links
Precision Test For Breast Cancer Treatment Remains Imprecise : Shots - Health News A genetic test of breast cancer tumors helped identify women whose survival odds would not be greatly improved by chemotherapy. But that test isn't as precise as women and doctors might like. 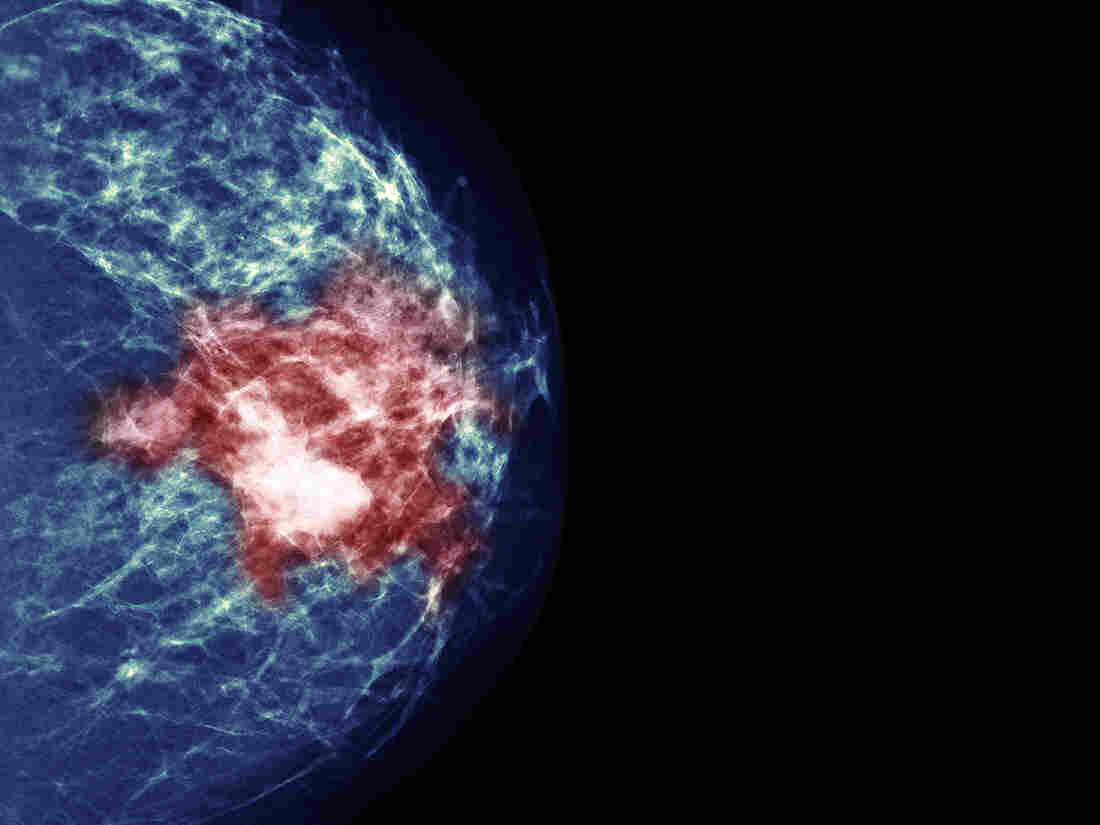 By testing tumors, researchers hoped to identify women who could avoid chemotherapy without increasing their risk of a cancer recurrence. Voisin/Phanie/Science Source hide caption 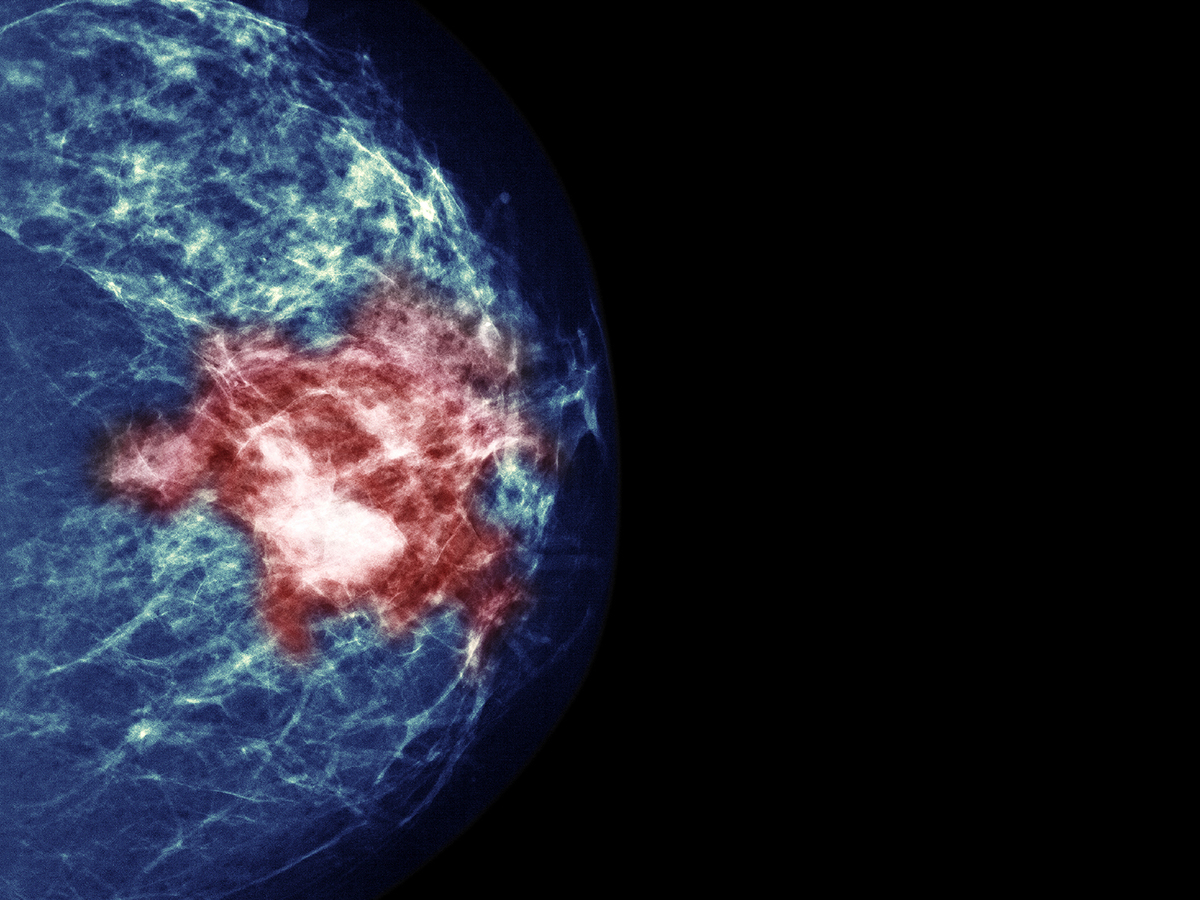 By testing tumors, researchers hoped to identify women who could avoid chemotherapy without increasing their risk of a cancer recurrence.

A major study about the best way to treat early-stage breast cancer reveals that "precision medicine" doesn't provide unambiguous answers about how to choose the best therapy.

That point is illustrated in a large study published Wednesday in the New England Journal of Medicine, involving decisions about chemotherapy.

As is true for many cancers, breast cancer responds best to treatment when it is caught early, before it has spread throughout the body. Dr. Fatima Cardoso, the study's lead author and a breast cancer specialist at the Champalimaud Clinical Center in Lisbon, Portugal, says that creates a conundrum for doctors and patients alike.

Because it's the only opportunity to cure the cancer, "when in doubt we tend to treat" women with early-stage breast cancer, she told Shots. "So we know that we overtreat the patients with early breast cancer."

That means that women could end up undergoing chemotherapy even if it wouldn't really improve their survival odds.

Hoping to refine those treatment decisions, Cardoso helped organize a huge study throughout Europe to see whether a commercially available genetic test called MammaPrint could help reduce that overtreatment. More than 6,600 women participated at 112 institutions in nine nations.

Scientists identified women with breast cancer whose physical exams suggested they were at relatively high risk for having the cancer return eventually after surgery, but who seemed to be at low risk of recurrence based on the genetic test results.

They were invited to participate in the study, which would randomly assign them to have chemotherapy or not. "You know that chemotherapy is a treatment that scares people, so overall and for the majority of patients, it was not difficult to convince them," Cardoso says.

The genomic test, which studies 70 distinct features of a tumor, did a pretty good job of predicting who was at low risk for recurrence of breast cancer and could therefore avoid the pain, discomfort and risks of chemotherapy. (The test, priced at $4,200, is covered by some insurance in the United States.)

The scientists found that 46 percent of women who were deemed to be at high risk of recurrence based on physical symptoms could actually skip chemotherapy with little consequence to their long-term survival.

But the test results weren't always definitive. About 95 percent of women who skipped chemotherapy as a result of the genetic test results were free of metastasis five years later, but those who had the additional treatment did about 1.5 percentage points better, give or take.

"It's possible that the benefit is zero, and it's possible that's 2 percent or maybe even a little more, you can't be sure," says Dr. Clifford Hudis, chief executive officer of the American Society of Clinical Oncology. He was not involved in the European study but co-wrote an editorial accompanying it. It would take another huge clinical trial to figure out whether chemotherapy does in fact add a small survival advantage.

But the study raises a bigger point here: The genomic test, as precise as it is, offers only probabilities, not absolute guidance. And that's a lesson that applies to the whole new realm of precision medicine, which is billed as potentially transformative for medical care.

"The new tools will definitely be helpful, but they often will pose challenges about what the right decision is," says Hunter, who wrote a perspective piece noting that people will need to develop a tolerance for uncertainty when using precision medicine tests.

Is it worth all the trouble of chemotherapy for women who are found to be at low risk for recurrence in this genomic test? That's a tough call, because it requires grasping the rather abstract idea of improving survival odds by maybe just 1 percentage point.

He says doctors and patients need better tools to understand and communicate the subtleties that are inherent in precision medicine.

Cardoso is already seeing this play out in her clinic. Women shown to be at low genetic risk on the MammaPrint test are usually opting not to have chemotherapy after their surgery. "But there always [are] some patients for whom 1 percent benefit is enough — and you need to respect the wishes of each individual patient."

She says the women clearly benefit from the new information, even though it doesn't provide an absolute answer.