Accessibility links
Common Anti-Gas Medication May Contaminate Medical Scopes : Shots - Health News A common over-the-counter medication used during procedures might make scopes harder to clean and increase the risk of contamination. It could put people at risk of infection, a small study finds. 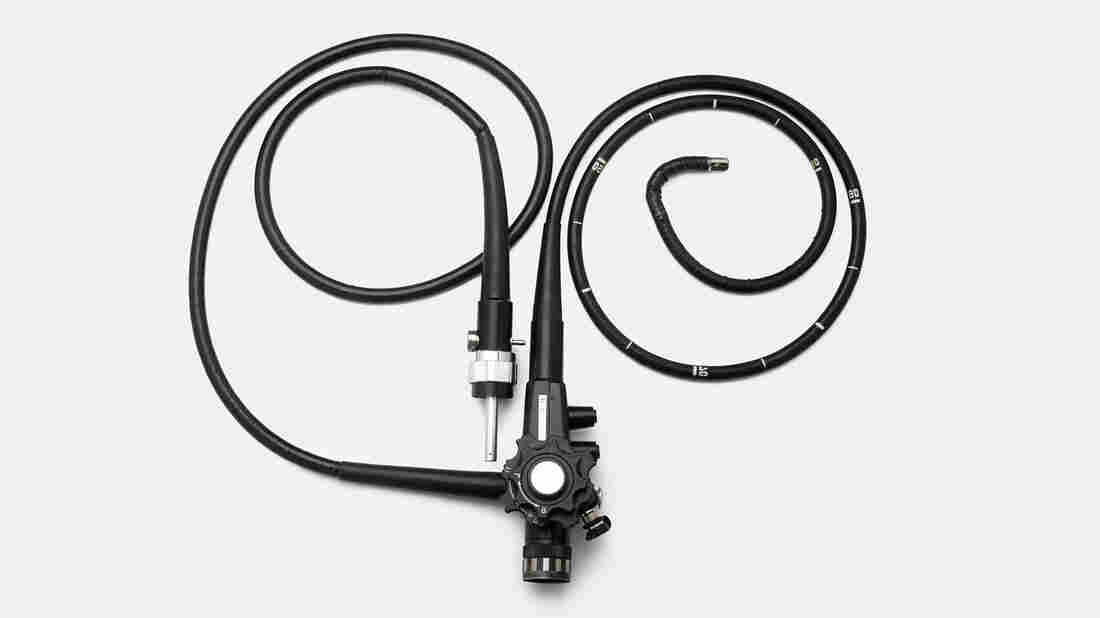 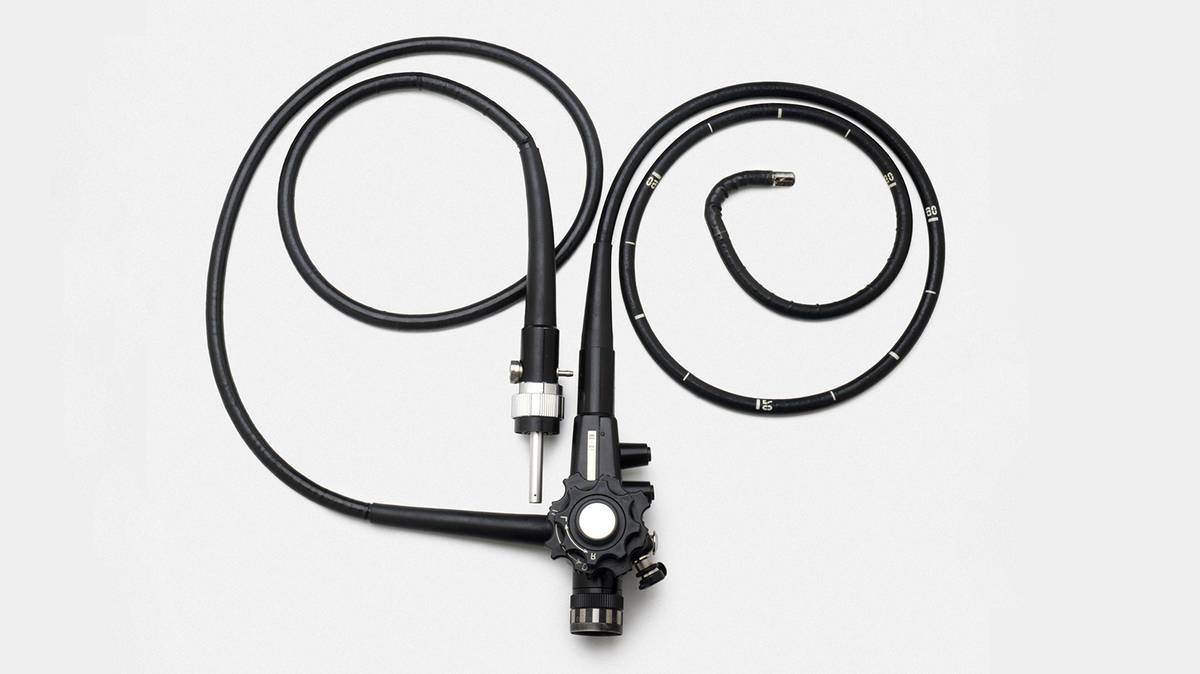 A surprising ingredient — gas relief drops designed for infants — may be contributing to the contamination of medical scopes and putting more patients at risk of infection, according to a small but provocative study.

Researchers in Minnesota unexpectedly found cloudy white fluid inside several colonoscopes and gastroscopes after they had been disinfected and deemed ready for use on the next patient.

Further analysis revealed that the fluid contained simethicone, the main ingredient in over-the-counter anti-gas medications available at grocery stores and pharmacies. Doctors regularly inject the liquid drops into gastrointestinal scopes during colonoscopies and other procedures to reduce bubbles inside the body that can impede visibility.

However, that routine practice may be helping bacteria grow inside a wide variety of scopes and making the bacteria harder to remove. The authors of the study, published in August in the American Journal of Infection Control, recommend that hospitals and doctors minimize the use of these products pending further research into their effect on patient safety.

No infections have been linked to the drops. The study only suggests that they could heighten the risk of contamination. "Finding residual fluid in scopes that should be dry would be troubling alone," says Cori Ofstead, the study's lead author. "The finding of fluid containing simethicone suggests we have more serious problems. It could explain why we are having more trouble getting these scopes clean."

Infant gas relief drops, which are available over the counter, contain sugars and thickeners to make the liquid solutions more palatable for babies, the researchers say. Ofstead said those ingredients "could provide the perfect habitat for the growth of bacteria" inside scopes.

The liquid drops contain silicone, which doesn't dissolve in water and can't be removed using detergents or disinfectants. The researchers said that silicone could add an impenetrable coating to blood, tissue and other organic material trapped inside scopes. It can also foster the growth of biofilm, a slimy material that protects bacteria and other microbes from being removed during cleaning.

Ofstead, an epidemiologist and chief executive of the medical research firm Ofstead & Associates in St. Paul, Minn., said these findings were "absolutely surprising" and that her research team stumbled upon them during a broader look at scope cleaning techniques.

The seven-month study was conducted with physicians and a surgery center affiliated with the University of Minnesota Health system. There was also funding for the study from 3M Co.; Medivators Inc., which sells scope cleaning equipment; Healthmark Industries, which provides cleaning products and accessories; and Ofstead & Associates.

Dr. Michael Shaw, a gastroenterologist and a co-author of the study, says halting the use of simethicone products would hinder doctors' ability to accurately treat patients with endoscopy. He's pursuing funding for larger studies at other endoscopy centers to determine the extent of the problem and possible alternatives.

"I don't want to see the public alarmed, but this study did raise a huge number of questions," says Shaw, an associate professor at the University of Minnesota Medical School.

Federal prosecutors, lawmakers and government regulators have been investigating a series of outbreaks of antibiotic-resistant "superbugs" across the country tied to a device known as a duodenoscope, which is used in about 700,000 procedures annually. As many as 350 patients at 41 medical centers worldwide were infected by or exposed to contaminated duodenoscopes from 2010 to 2015, according to the Food and Drug Administration.

Regulators and medical experts have said the complex design of the tip of the duodenoscope can make it difficult to clean even when following the manufacturer's instructions. The infant gas relief drops are used occasionally with duodenoscopes, doctors say, and it's unclear what role, if any, those products might have had on patient infections.

This study focused on more widely used colonoscopes and gastroscopes, which have simpler designs and tend to be easier to disinfect. The researchers found bacteria in some of the scopes that were analyzed, but the bacteria weren't the drug-resistant superbugs that can be deadly for patients.

At the Minnesota surgery center, researchers examined colonoscopes and gastroscopes three different times during the seven-month period. They confirmed that technicians were following the manufacturer's cleaning instructions during nine unannounced audits.

In the final examinations, researchers observed multiple fluid droplets inside 19 of the 20 endoscopes that were cleaned and disinfected. In eight of those 19 scopes, the fluid appeared cloudy, white, opaque, shimmery or viscous.

The discovery was unexpected and puzzling, the researchers say, so they contacted other experts who suggested it might be simethicone. The study's authors then examined the infant gas relief drops the surgery center was using and noted similarities to what they saw inside the scopes.

The researchers were able to obtain samples from just three of the scopes because the fluid was in narrow channels or other hard-to-reach areas. Simethicone was found in two of the three samples.

The findings raise questions for the three largest manufacturers of gastrointestinal endoscopes and the doctors who use the devices to treat millions of patients annually.

Scope manufacturers are well aware that anti-gas products are used to reduce bubbles during procedures. Two companies — Pentax Medical and Fujifilm — have told health care providers that injecting these drops into endoscopes is not recommended because residue can build up and impede cleaning.

"Due to their nature, these silicone-based agents cling tenaciously to surfaces," Pentax wrote in its scope cleaning instructions in 2014. "Unless they are rinsed very thoroughly, a barrier which could reduce the effectiveness of the disinfection/sterilization process could be created."

The leading manufacturer of gastrointestinal scopes, Olympus Corp., told customers in a 2009 letter that because simethicone may be difficult to remove from endoscopy equipment, health care providers should use the "lowest concentration possible to achieve the desired effect."

Representatives of Olympus and Fujifilm didn't respond to requests for comment. Pentax Medical said in a statement via email that "maintaining patient safety and quality is our utmost priority."

The American Society for Gastrointestinal Endoscopy, which represents physicians using these instruments, has acknowledged that anti-gas drops are not FDA approved for this use, but doctors are free to use medications and devices in off-label ways not specifically approved by the FDA.

Shaw, the gastroenterologist involved in the study, said the amount of liquid drops used by doctors to prevent bubbles varies widely. For now, he recommends the lowest concentration necessary. "There is really no guidance for physicians," he says.

The Minnesota study also noted that some liquid simethicone products have been recalled in recent years due to contamination with molds, yeasts and bacteria, posing another potential threat to patients undergoing endoscopy.

These drops aren't sterile, yet doctors conducting the procedures often mix them with sterile water that's used for irrigation and other purposes. In other instances, doctors inject the drops directly into the scope.

Truscott says more studies are needed, but in the meantime scope manufacturers should issue stronger warnings to hospitals and doctors to limit the use of anti-gas drops.

"That would be the fastest way to decrease it, and it would have the most weight right now," Truscott says.