Accessibility links
Their Masters' Voices: Dogs Understand Tone And Meaning Of Words : Shots - Health News When humans talk to dogs, the canine brains seem to separate the meaning of the words from the intonation used and to analyze each aspect independently. 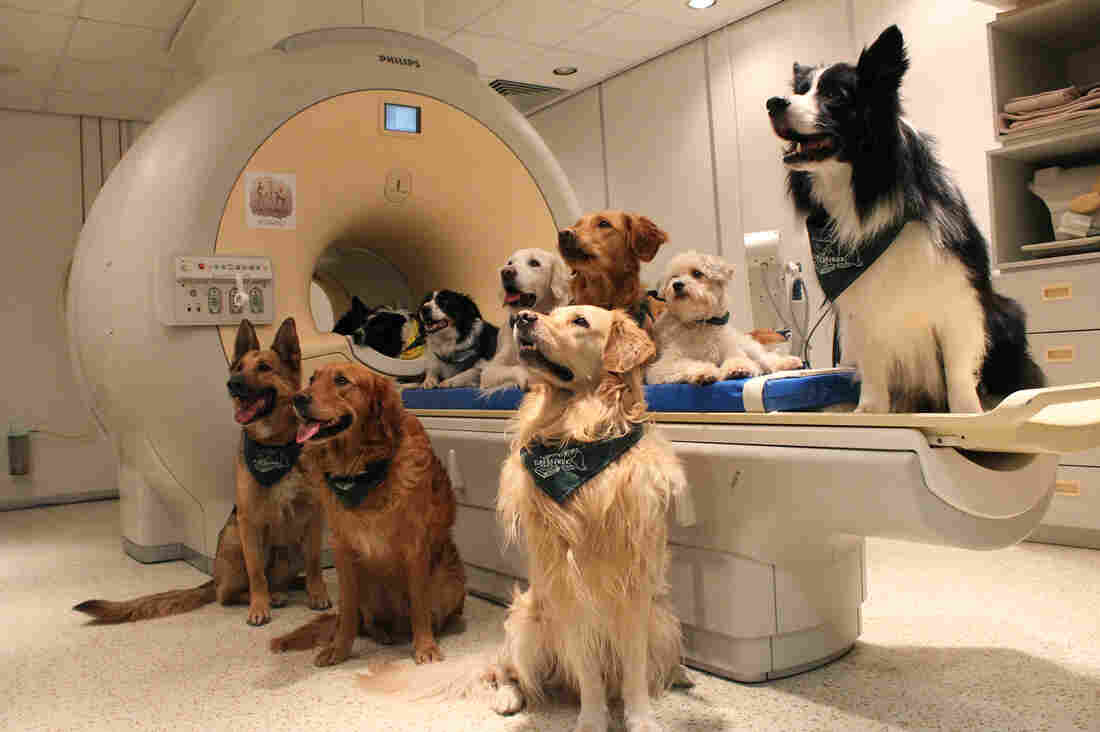 What did she say? Eniko Kubinyi/Science hide caption 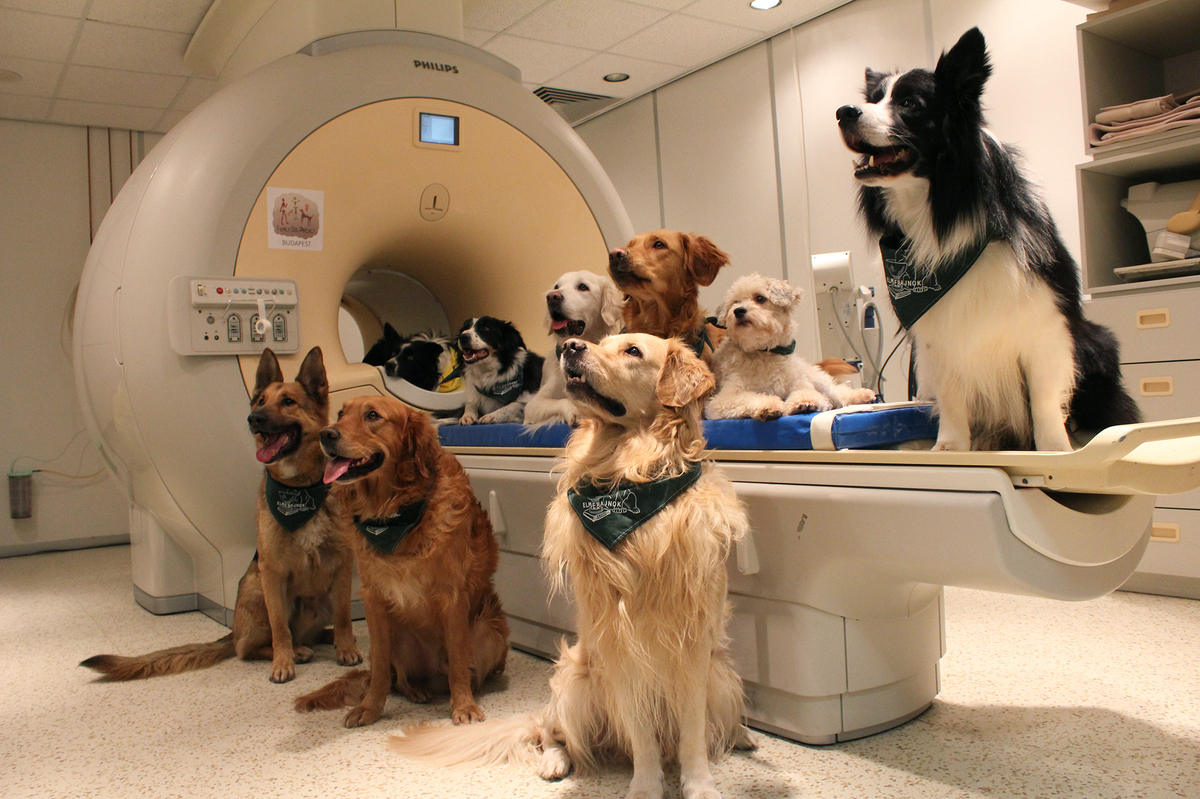 What did she say?

When you praise a dog, it's listening not just to the words you say but also how you say them.

That might not be huge news to dog owners. But now scientists have explored this phenomenon by using an imaging machine to peek inside the brains of 13 dogs as they listened to their trainer's voice.

"Dogs process both what we say and how we say it in a way which is amazingly similar to how human brains do," says Attila Andics, a neuroscientist at Eotvos Lorand University in Hungary.

When dogs hear speech, he explains, they seem to separate the meaning of words from the intonation, and each aspect of speech is analyzed independently. The left hemisphere of the brain processes meaning, while intonation is analyzed in the right hemisphere.

All the dogs in the study were willing volunteers and were trained to lie still in the scanner using a training method developed by Marta Gacsi. The dogs could get up and leave the machine whenever they wanted. But it was clear to the dogs that their human companions loved it when they did this very easy task.

"They are really happy to participate," says Andics. "The difficult aspect of the training was to convince dogs that 'motionless' means really motionless. They can't move more than 3 millimeters in any direction, otherwise we have to throw out all of the data." 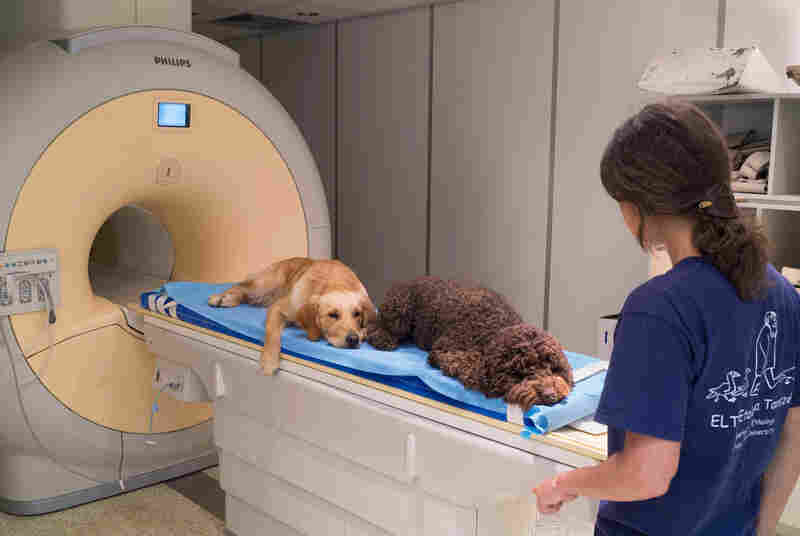 Dogs were trained to lie motionless inside a scanner and listen carefully to human speech. Borbala Ferenczy/Science hide caption 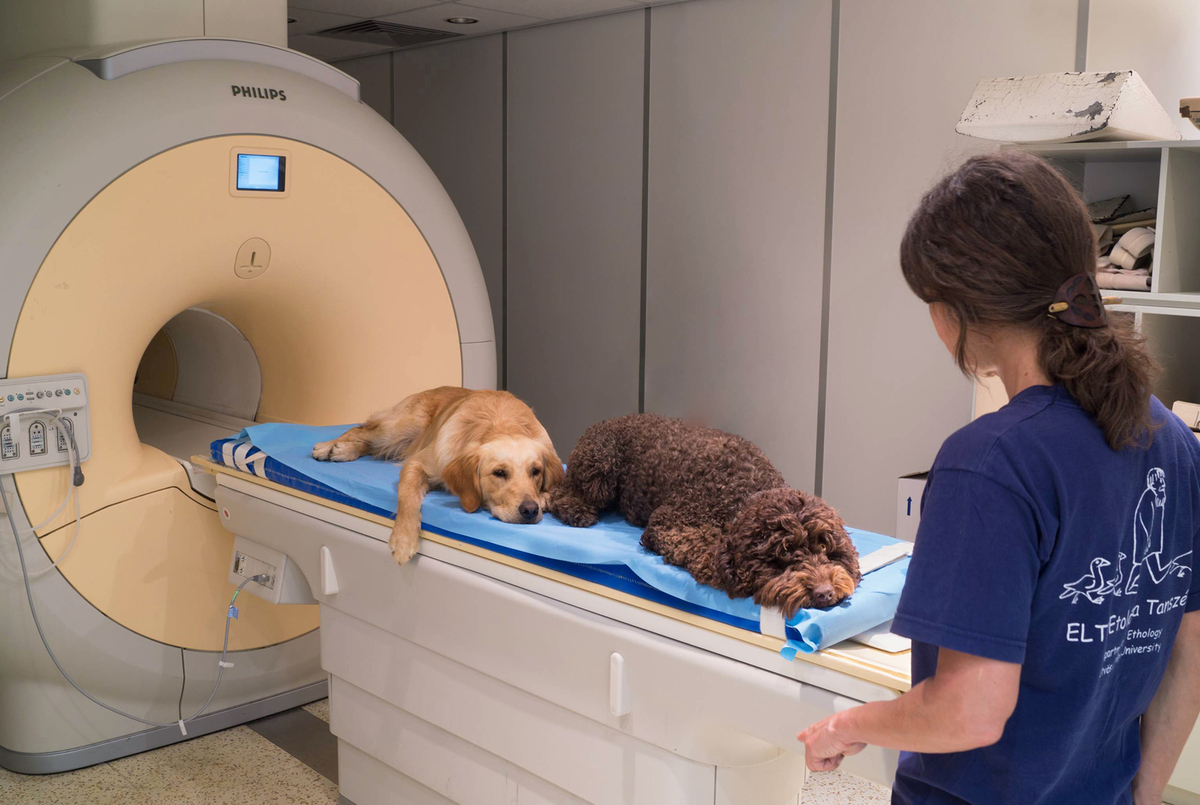 Dogs were trained to lie motionless inside a scanner and listen carefully to human speech.

He says most dog owners have experimented with trying to "trick" their dogs by saying nonsense words in a cheerful, happy tone of voice. "I think the big difference here is that they only heard us, they didn't see us," says Andics, because the dogs were inside the machine. "Here, the only information they had was the speech signal. What we saw is that for praise to be processed as a reward, when there is no other supporting information, both word meaning and intonation have to fit."

And while this study reveals something about dogs, he believes it also says something important about what it means to be human.

"Humans seem to be the only species which uses words and intonation for communicating emotions, feelings, inner states," he says. "To find that dogs have a very similar neural mechanism to tell apart meaningful words from meaningless sound sequences is, I think, really amazing."

For decades, scientists have believed that a big shift occurred in human evolution that made our brain's left hemisphere dominant in processing communication, and that this is what led to the evolution of our unique language abilities, says Brian Hare, a cognitive neuroscientist at the Duke Institute for Brain Sciences in Durham, N.C.

"This really challenges that, because dogs also have a left hemispheric bias for processing words with meaning," Hare says. "That's a surprise."

He says people have been studying great apes and fossils to try to figure out exactly when that left hemispheric shift occurred. "It seems the story is really that there is a general mammalian bias to process words or meaning in communication in the left hemisphere and it became exaggerated in humans," says Hare. "It's not something completely new to our species."

What's more, he says, this study is important because he thinks it's the first major finding using noninvasive neuroscience with awake animals — usually they have to be drugged or restrained. "That just changes everything," he says. "You literally can see what's going on in their brains just like you would with people. And it's really the first time that this has led to a big discovery and I think we're going to see a lot more of this."