Accessibility links
Harder To Test For Marijuana Impairment Than Influence Of Alcohol : Shots - Health News Five states will vote on legalizing recreational marijuana in November. For police, it's more challenging to assess if people are driving while high than it is to test for the influence of alcohol. 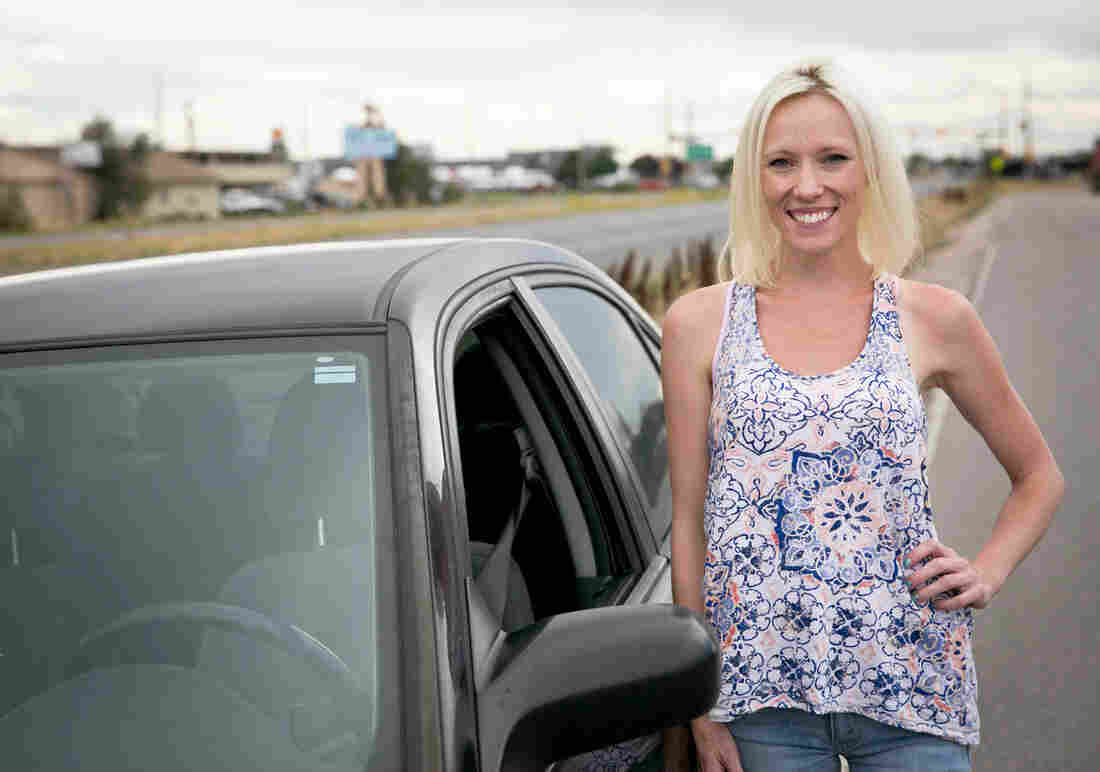 Abby McLean of Northglenn, Colo., stands near the stretch of U.S. 85 in Adams County where she was pulled over for a DUI check in September 2014. Nathaniel Minor/CPR News hide caption 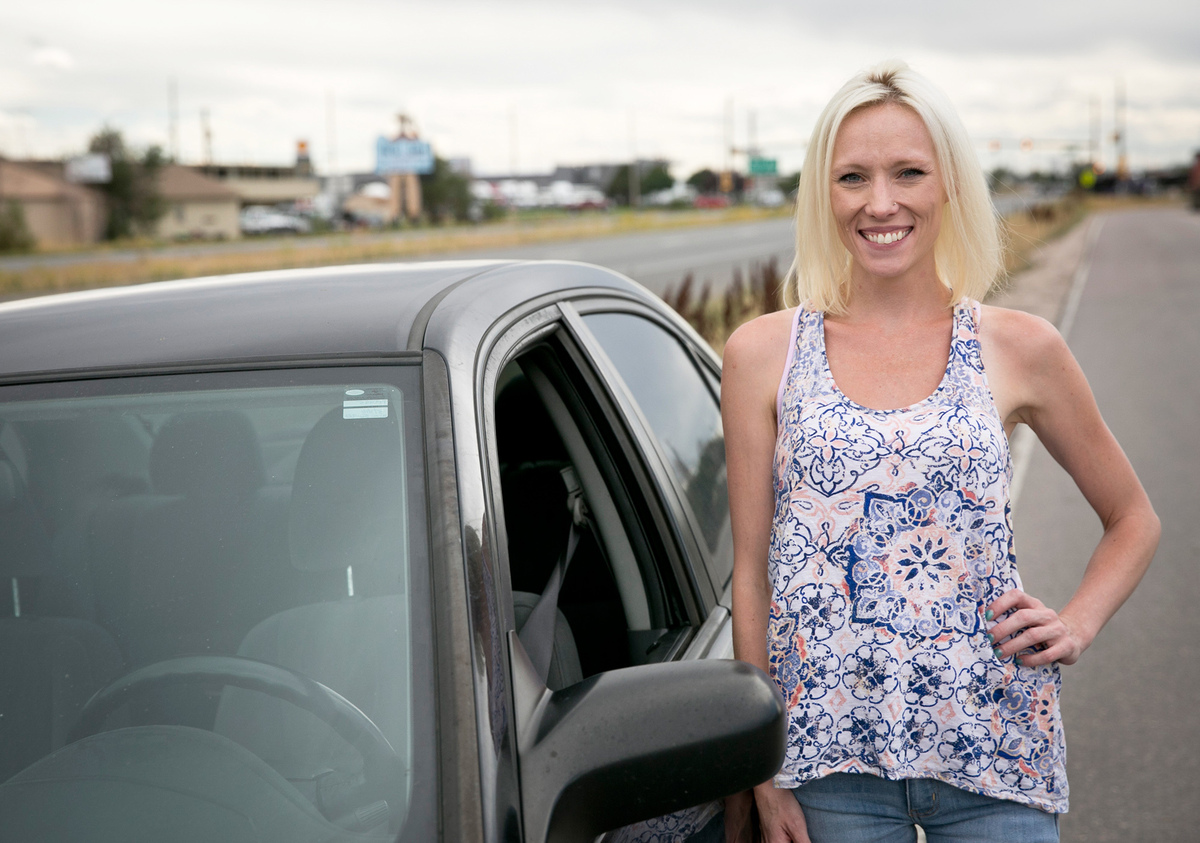 Abby McLean of Northglenn, Colo., stands near the stretch of U.S. 85 in Adams County where she was pulled over for a DUI check in September 2014.

This story starts with a stay-at-home-mom from the Denver suburbs.

Her name is Abby McLean. She's 30 and lives in Northglenn, Colo. She was driving home from a late dinner with a friend two years ago when she came upon a DUI roadside checkpoint.

"I hadn't drank or smoked anything, so I was like, 'Let's go through the checkpoint,' " she recalls.

McLean is a regular marijuana user but she insists she never drives while high.

Still, the cop at the checkpoint tells her he smells marijuana and that her eyes are bloodshot. Eventually he whips out handcuffs and McClean freaks.

She didn't go to jail that night, but she got home hours late. A blood test later revealed McClean had 5 times the legal limit of THC, the mind-altering compound in marijuana.

Colorado's marijuana DUI law is modeled on the one for alcohol, which sets a number to determine when someone is too intoxicated to drive. For pot, that number is five nanograms of THC per milliliter of blood. Anything above that and the law says you shouldn't be driving.

It may sound like an open and shut case that could have resulted in any number of penalties. But McLean's attorney, Nadav Aschner, had a field day in court with Colorado's marijuana intoxication limit.

"Even the state's experts will say that number alone is something, but generally not enough, and we really hammered that home," he says.

Aschner got a hung jury and McLean pleaded to a lesser offense.

Still, McLean's trip through the criminal justice system is emblematic of numbers that suggest a sharp increase in marijuana DUI arrests in Colorado. So far this year, State Patrol data show that total DUI citations this year rose to 398 through early July, compared with 316 in for the same period 2015.

More states may come up with their own marijuana DUI guidelines. Voters in five states from California to Maine are deciding this November whether to legalize recreational marijuana. They're weighing the good, the bad and the still unknown. Issues like driving while stoned are still in the "unknown" category.

It turns out, measuring a person's THC is actually a poor indicator of intoxication. Unlike alcohol, THC gets stored in your fat cells, and isn't water-soluble like alcohol, says Thomas Marcotte, co-director of The Center for Medicinal Cannabis Research at the University of California, San Diego.

"Unlike alcohol, which has a generally linear relationship between the amount of alcohol you consume, your breath alcohol content and driving performance, the THC route of metabolism is very different," he explains.

That's why adapting drunk driving laws to marijuana makes for bad policy, says Mark Kleiman, a professor of public policy at New York University. "You can be positive for THC a week after the last time you used cannabis," he says. "Not subjectively impaired at all, not impaired at all by any objective measure, but still positive."

Still, Colorado and five other states have such laws on the books because pretty much everyone agrees that driving stoned can be dangerous, especially when combined with alcohol.

What cops really need is a simple roadside sobriety test. Scientists at UCSD are among researchers working on several apps that could measure how impaired one is behind the wheel. One has a person follow a square moving around a tablet screen with a finger, which measures something called "critical tracking." Another app measures time distortion, because things can slow way down when a person is high.

Those tests are still experimental. 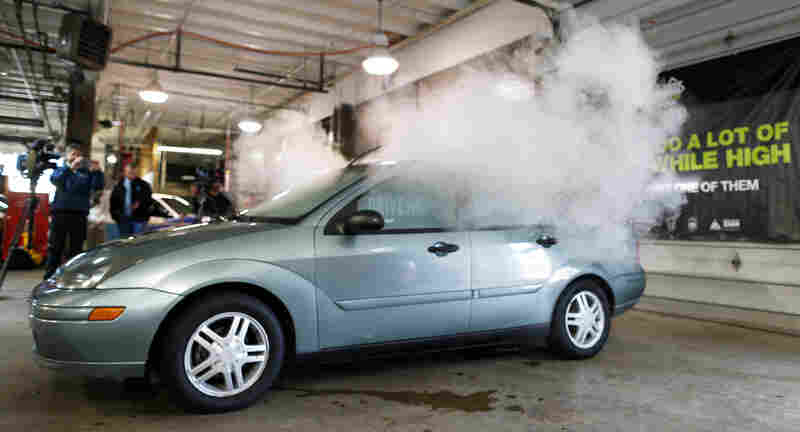 Simulated marijuana smoke billows out of the windows of a car during a demonstration by the Colorado Department of Transportation. David Zalubowski/AP hide caption 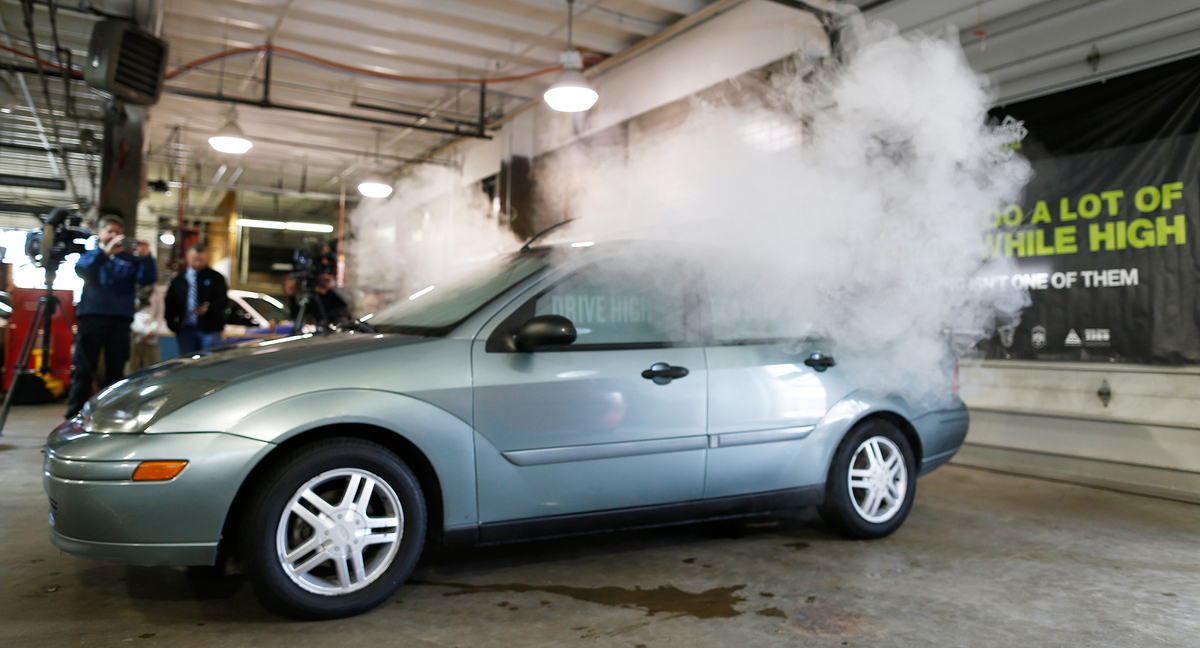 Simulated marijuana smoke billows out of the windows of a car during a demonstration by the Colorado Department of Transportation.

Denver District Attorney Mitch Morrissey says the uncertainty doesn't mean Colorado should throw out its THC limit. He says it may not be perfect, but it gives juries another piece of evidence to consider at trial.

Morrissey remembers trying alcohol DUI cases as a young prosecutor. The science wasn't settled then either, the blood alcohol standard was about twice as high as it is now, and it took years for it to be lowered.

"I think that has to do with better testing better technology," which Morrissey says will get improve for marijuana too.

In the meantime, some regular marijuana users, like Abby McLean, are scared to drive for fear of failed blood tests.

"I haven't gone out really since then, because I'm paranoid to run into the same surprise, 'Oh oh, there's a DUI checkpoint.' "

A checkpoint that could mean potentially thousands more dollars in attorneys fees to defend herself.